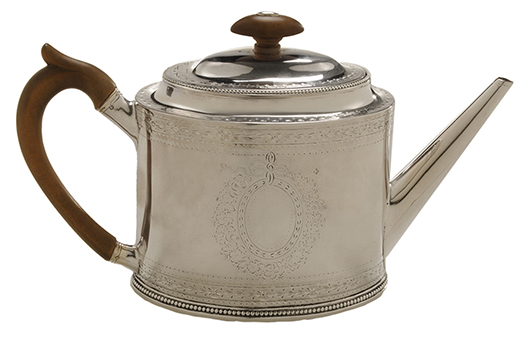 BEACHWOOD, Ohio – In 18th-century England, most women married when young, had children and learned to cook, take care of the house and children, make textiles or at least create bedding or clothing, and be her husband’s helper when needed.

Hester Bateman was an exception. She married a man who made gold chains. He died after they had six children. He left the metal-working tools to his wife in his will so he must have known what a skillful silversmith she was. Hester became a registered silvermaker in 1761 using the mark “HB” in script. By 1774 she was in her own business with two of her sons. They used the latest methods and made their silverware from thin sheets of silver rather than the Sheffield plate-type made by others. They stayed with traditional styles and made everything from tea caddies to inkwells. Hester retired in 1790, and died in 1794. She was the first well-known female silversmith in England, and her work has always been popular with today’s collectors.

I knew about the pioneering woman. While in college I looked for, bought for $15, and still have a pair of Hester Bateman silver sugar tongs. It was one of my first antiques. Brunk Auctions in Asheville, N.C., sold a Bateman teapot in the fall of 2014, for $2,832.

Q: In 1960 we bought a queen-size birch bed and dresser marked “Cal Shop.” I can’t find any information about the maker or value. Can you help?

A: The trademark “Cal Shop” was owned by California Furniture Shops Ltd., which was based in Los Angeles. It was in business from at least the late 1940s into the 1970s or ’80s. Your bedroom set would sell as used furniture if it’s in excellent shape. Try selling it locally, though, so shipping costs will not be high.

Q: I have a 300-400 pound iron anvil that was given to me almost 40 years ago. I sprayed it black because it was rusting, and it’s rusting a little bit again. The anvil is dated 1917. I used it as a decoration in the past, but I have no use for it anymore. Can you give me some idea of its worth?

A: Cast-iron anvils have been made in different sizes and shapes for different uses. Anvils weighing several hundred pounds were primarily used in industry, while smaller ones were used by farmers. Someone who collects old tools or vintage farm equipment might be interested an old anvil, but a large, heavy anvil could be harder to sell than one that’s easier to pick up and display. The date on your anvil adds interest. Recent prices include $192 for a 115-pound anvil and $380 for a 160-pound anvil.

Q: I have several figurines (resin, I think) that range from 3 to 5 inches tall. Each is marked with “KFS” on the back. They also are marked on the front of its base with a character name, including Hans, Fritz, Prince Valiant, Popeye, etc. One of them is a man in a sailor suit and is marked “Tim Tyler.” Can you tell me something about him, how many different figurines were made, and if they are collectible?

A: The initials “KFS” stand for King Features Syndicate, who owned the comic strips and the rights to the characters. A series of 24 figurines was made by Syroco for King Features Syndicate in 1944. Twelve of them, including Tim Tyler, were offered as Pillsbury Enriched Farina premiums. Tim Tyler was a cartoon strip that debuted in 1928 and was featured in newspapers, comic books and movies. The last strip ran in 1996. The figurine is shown in a Navy uniform because it was issued during World War II. Most of these figurines sell online for $15 to $30 each.

Q: I have a mug that reads “Ovaltine’s Golden Annie-versary” in black, gold and white letters on one side. It has a big gold number “50” with a picture of Little Orphan Annie and her dog, Sandy, inside the zero. What’s the anniversary and what is the mug worth?

A: This mug was issued in 1981 to commemorate the 50th anniversary of Ovaltine’s sponsorship of the Little Orphan Annie radio show. Ovaltine sponsored the show from 1931 to 1940. Their advertising agency wrote the scripts for the show, which promoted Ovaltine. Ovaltine was first made in Switzerland in 1904 and originally was called Ovomaltine because it included eggs and malt. The name became Ovaltine in English-speaking countries in 1909. Ovaltine’s Annie-versary mugs sell for $5 to $15.

Q: I’m trying to find out something about a picture of Giuseppe Verdi I inherited from my grandparents, who emigrated from Italy in the early 1900s. Verdi is looking to the left in the picture. It’s 10 inches high and 7 inches wide. I’ve seen this picture before, but this one is woven in what looks like silk. Along the bottom left it reads “Nato a Roncole (Bufseto) il 10 Ottobre 1813” and on the bottom right “Morto a Milano il 27 Gennaio 1901.” Any information would be appreciated.

A: Giuseppi Verdi was an Italian composer best known for his operas, including “Aida” and “La Traviata.” Memorial pictures like yours were made after Verdi died. Your picture lists his birth and death dates and places. He was born Oct. 10, 1813, in the village of Roncole, commune of Busseto, and died Jan. 27, 1813, in Milan, Italy. Large silk memorial pictures like this sell for $200-$500.

Tip: Stains on crystal stemware sometimes can be removed by rubbing the stain with a cut lemon or a cloth dipped in turpentine.

Take advantage of a free listing for your group to announce events or to find antique shows, national meetings and other events. Go to the Calendar at Kovels.com to find, publicize and plan your antiquing trips.

“A Diary: How to Settle a Collector’s Estate,” our new week-by-week record of the settlement of an estate, from your first days gathering legal papers to the last days when you’re dividing antiques among heirs and selling everything else – even the house. How to identify pottery, jewelry and other popular collectibles. Tips on where and how to sell furniture, jewelry, dishes, figurines, record albums, bikes and even clothes. We include lots of pictures and prices and explain the advantages of a house sale, auction, selling to a dealer, or donating to a charity. Learn about how to handle the special problems of security and theft. Plus a free current supplement with useful websites, auctions lists and other current information. Available only from Kovels for $19.95 plus $4.95 postage and handling. Order by phone at 800-303-1996; online at Kovels.com; or write to Kovels, P.O. Box 22900, Beachwood, OH 44122.