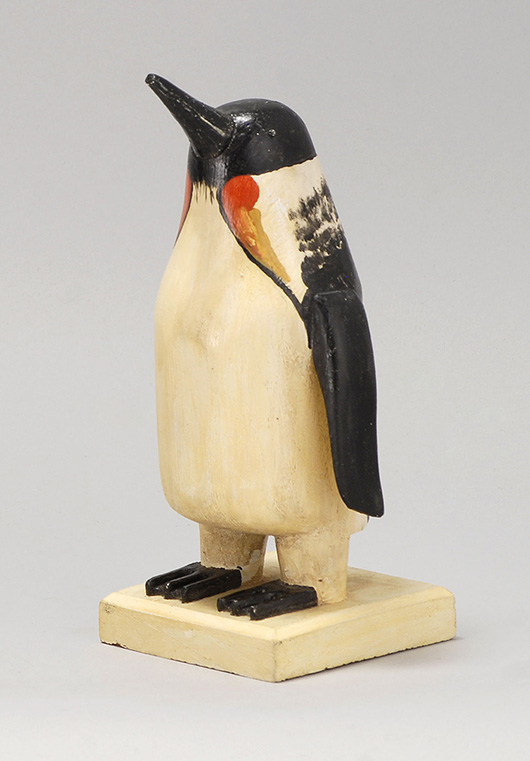 BEACHWOOD, Ohio – Carvings of birds, especially ducks and other wild species, are collected by those who consider the best examples to be art, while other examples are to be used as decoys when hunting. While both types of decoys can be found at antiques auctions and shops, most are sold in auctions or shows that specialize in decoys, wood carvings and related pieces.

The best of the 20th- and 21st-century carvers are famous, and collectors can name the most talented. A stone carver named Charles H. Hart (1862-1960) hunted and made decoys for his brother and friends. At first Hart specialized in just a few species, including black ducks, Canada Geese, goldeneyes and mallards. About 1900, he started making a stick-up black duck that had detached wings that flap and a head that could be turned. Hart was soon selling his birds to stores in Boston. In the 1930s, when the country was fascinated by the explorations in Antarctica, he began carving penguins. Most had applied flippers and color showing at the neck of theblack and white birds. He made them in all sizes from about 6 inches to 4 feet high.

Today, because of the movies Happy Feet and Madagascar featuring penguins, there is renewed interest in the penguins and the work by Charles Hart. The 8-inch-high birds have been auctioning for $400 to $750.

Q: I bought a secondhand Ethan Allen drop-leaf side table back in 1967. It’s still in very good condition. It’s maple and in a typical Early American style. It’s marked “Ethan Allen” and “Baumritter.” Why Baumritter? And what is the table worth?

A: The furniture company we know as Ethan Allen was founded in 1932 as Baumritter Corp. The owners were Theodore Baumritter and his brother-in-law, Nathan S. Ancell. The company, based in New York City, made and sold housewares and decorative items the first few years. It didn’t start manufacturing and selling furniture until 1939, three years after the partners bought a closed furniture factory in Beecher Falls, Vermont. The company named its Early American line of furniture “Ethan Allen” after the Revolutionary War hero from Vermont. The company’s name was changed from Baumritter Corp. to Ethan Allen Industries in 1972. Your table is an early one if it’s marked “Baumritter,” but it’s not an antique. Still, the table is well-made and solid and could sell for $100 to $250.

Q: I have a gasoline ration card from July 10, 1942, that belonged to my husband’s grandmother. It has a large capital letter “A” and the words “Basic Gasoline Ration, United States of America, Office of Price Administration” on the top. My grandmother’s name and address and the make, model and date of her car are written in ink. Is this worth anything or just a piece of the past?

A: During World War II, gasoline, tires, sugar, meat, shoes and other items were rationed. Gasoline rationing began in 1942 and lasted until World War II ended in August 1945. Gas rationing was meant to reduce driving so the supply of rubber and gas could be used for military needs. The car owner received a ration book with coupons that had to be redeemed when buying the gas. A sticker with the appropriate letter was displayed on the car’s windshield. Most people were issued the “A” sticker and card, which allowed three or four gallons of gas a week. People working in the war effort who needed to drive to work were allowed up to 8 gallons a week and had a “B” card. “C” was for doctors, nurses, ministers, mail delivery, farm workers, construction workers, and several other groups, “E” for emergency vehicles, “R” for nonhighway farm vehicles, “T” for truckers, and “X” for members of Congress and other special groups. Gasoline ration cards sell for $1 to $3.

Q: I have a signed Phoebe Stabler brass Madonna and child statue that was my great-grandmother’s. Is this of any value?

Q: I have a pewter chick and cracked eggshell figural napkin holder that’s been in our family well over 80 years. Can you tell me who made it and its value?

A: Napkin rings were fashionable from 1869 to about 1900. Most were made of silver plate, though sterling silver, porcelain, glass, wood and other materials were also used. Silver-plated figural napkin rings are popular with collectors today. Several companies, including Derby Silver Co., made figural chick and egg napkin rings. Most figural rings with silver plating in good condition sell for $100 to $300.

Tip: It can be hard to thread a needle, especially with the old pure cotton thread that should be used for repairing old fabric. Put hairspray on the end of the thread to stiffen it.

Order the special reports set: “Buyers’ Guide to 20th Century Costume Jewelry,” Part One and Part Two. Only $34.95. These reports identify the most popular makers and designers of costume jewelry. European and North American costume jewelry, Mexican silver jewelry and mid-century jewelry. Recognize Hobe and Sigi jewelry and rare pieces of Bakelite. For the serious collector and the beginner. Available only from Kovels for $34.95 plus $4.95 postage and handling. Order by phone at 800-303-1996; online at Kovels.com; or mail to Kovels, P.O. Box 22900, Beachwood, OH 44122.