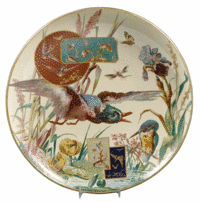 Fish, birds, a crayfish, moth, dragonfly, kingfisher, duck, water lilies and iris are all part of the foliage and scenery on this aesthetic plate. The 17 1/2-inch charger was made in France by Barluet & Cie and recently sold at a Skinner auction in Boston for $1,007.

Daring designers created a new look for dinnerware, furniture and other household furnishings in the late 19th century. It was part of a new philosophy that promoted the power and importance of art and beauty. Life was to be led for pleasure, not for moral or useful reasons. You were to depend on personal experience and intuition, not science, when making decisions. Furniture was made in the aesthetic style with ebonized (black) finishes and gold trim. Many designs were influenced by traditional Japanese designs and were usually asymmetrical — perhaps a single off-center branch, bird or flower. All types of natural subjects, including realistic insects, butterflies, animals and plants, were included. The ceramics of the period also featured nature: living creatures, plants, mountains and streams. For about 30 years, ending in 1901, aesthetic designs were widely used in France, England and the United States. Today, collectors can find furniture made by Herter Brothers in the United States or dishes made in France and sold by Shreve, Crump & Low of Boston that exhibit aesthetic ideals.

Q: I recently bought an old Turkish fainting couch made by Naperville Lounge Co. My husband says it’s the ugliest couch he’s ever seen. The upholstery is worn. I’m planning on selling it, but I’m wondering if I should have it restored first?

A: Naperville Lounge Co. was founded in Naperville, Ill., in about 1893. Peter Edward Kroehler, the company’s bookkeeper, bought Naperville Lounge Co. in 1902. The company’s name was changed to Kroehler Manufacturing Co., and by 1915 it was the largest manufacturer of upholstered furniture in the United States. The factory in Naperville closed in 1978. Your fainting couch probably was made around 1900. Don’t pay to upholster it before you try to sell it. It will cost you more than the couch is worth.

Q: I have an antique print of Daybreak by Maxfield Parrish in an original antique frame with leaded glass. The print is 18 inches high and 30 inches wide and was produced and signed by the House of Art in New York. I can’t locate a date, but it seems to be quite old and has been in my family for decades. Can you give me an approximate value?

A: Maxfield Parrish (1870-1966) was an illustrator who designed magazine covers, posters, calendars and advertisements and also painted murals. He often painted from photographs, which he took. The House of Art reproduced several of his paintings in the 1920s. Daybreak, done in 1922, is one of his most popular prints. More than a million copies were sold. By 1925 cheap copies were being made. Original prints sell for about $200.

Q: How can you remove old adhesive tape that has been on a painted metal surface for about 50 years? It won’t peel off. Scraping would scratch the painted surface. This is a small object, so I could soak it in something.

A: There are several methods you can try. Test each method in a small area before using any kind of solvent or solution to be sure it doesn’t remove the paint. Start with the safest methods first. Try softening the glue by using a hair dryer set on high. Stop if you see the color coming off when you start to remove the tape. Try soaking the object in a solution of dishwashing liquid and vinegar or ammonia in warm water. If the paint is washable, you can try covering the taped area with a cloth soaked in warm vinegar. To remove the remaining traces of glue, try rubbing them with mayonnaise, lemon juice, peanut butter or WD-40. You also can use a commercial solvent like Goo Gone.

Q: I have a bottle labeled “Dr. Baker’s Grape Cure.” It says it “regulates your system” and lists several ailments it supposedly cures. Can you tell me how old it is?

A: Dr. Baker’s Grape Cure was a patent medicine developed in 1892 and owned by William Kelsey (1851-1935). It was manufactured and sold by the Kelsey Press Co. of Meriden, Conn. There may not have been a real Dr. Baker. The formula was mixed by a local pharmacist and included sherry or port, herbal extracts, glycerin, water and acetanilide, a pain reliever. Kelsey added a “secret ingredient.” The cure sold for $1 a bottle. Kelsey retired in 1923. Unfilled bottles of Dr. Baker’s Grape Cure were used to bottle ink reducer from about 1901 to 1960.

Q: I’ve been collecting cast-iron trivets for many years and have more than 100 different ones. Many are by Wilton. One has the year 1894 on the front. I also have about a dozen decorated with the embossed initials “JZH” that are dated from 1948 through 1952. I would like to know what they’re worth.

A: Wilton Products made cast-iron trivets, doorstops, match safes, kitchenware, sconces and figures from 1935 to 1989. The Wilton family founded Susquehanna Castings in Wrightsville, Pa., in 1893. But it was not until years later that reproductions of early American trivets were cast and decorated at the Wilton foundry. Trivets marked “JZH” were made by John Zimmerman Harner (1872-1965) at the Union Manufacturing Co. of Boyertown, Pa. Union Manufacturing made a series of alphabet trivets in cast iron from 1944 to 1958. Designs were reproductions of antique trivets. Each was marked with a letter of the alphabet, the date and the initials “JZH.” Some of the company’s popular designs were reissued. Trivets are useful, so even reproductions sell for $25 and up.

Tip: Crayon marks can be removed from wooden furniture with mayonnaise. Rub in the mayonnaise, let it sit for a few hours, then wipe with a damp cloth.

Need more information about collectibles? Find it at Kovels.com, our website for collectors. Check prices there, too. More than 700,000 are listed, and viewing them is free. You can also sign up to read our weekly Kovels Komments. It includes the latest news, tips and questions and is delivered by e-mail, free, if you register. Kovels.com offers extra collector’s information and lists of publications, clubs, appraisers, auction houses, people who sell parts or repair antiques and much more. You can subscribe to “Kovels on Antiques and Collectibles,” our monthly newsletter filled with prices, facts and color photos. Kovels.com adds to the information in our newspaper column and helps you find useful sources needed by collectors.

Just published! The best book to own if you want to buy or sell or collect. The new Kovels’ Antiques & Collectibles Price Guide, 2011, 43rd edition, is your most accurate source for current prices. This large-size paperback has more than 2,600 color photographs and 42,000 up-to-date prices for more than 775 categories of antiques and collectibles. You’ll also find hundreds of factory histories and marks and a report on the record prices of the year, plus helpful sidebars and tips about buying, selling, collecting and preserving your treasures. Available online at Kovelsonlinestore.com; by phone at 800-303-1996; at your bookstore; or send $27.95 plus $4.95 postage to Price Book, Box 22900, Beachwood, OH 44122.