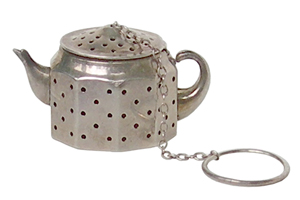 This 1-inch-high octagonal teapot is a tea infuser, the inspiration for the teabag. It is sterling silver and would sell for about $100. It can be used every day. Just open the top and, because tea leaves expand, fill it less than halfway. Then dip it in a cup of hot water.

Tea, it is said, was first drunk by the Chinese Emperor Shen Nung about 2737 B.C. Then someone in China invented a device that shredded tea leaves, making it easier to brew tea.

The idea of making tea in a cup instead of a pot seems to have begun in the 19th century when silver infusers were made to hold tea leaves. Infusers usually were small balls with many holes. The ball could open and close to hold the leaves. It was dipped into a cup of hot water a few times, then removed. Silver infusers became very popular in the late-19th century and silversmiths were soon making not just balls, but tiny silver teapots, eggs, lanterns, acorns and other shapes, some with elaborate embossed designs. These sterling tea balls with chains are collected today and cost from $100 to $1,000.

The teabag was invented in the United States in 1903. It was a hand-sewn silk bag. Soon a machine was invented to fill and close a teabag made of special paper. Eventually aluminum foil was also used for disposable bags. The familiar rectangular teabag was not invented until 1944. Today there are circular and pyramidal teabags, too.

All of this has led to a variety of collecting choices for tea lovers. Some save free teabag tags. Some belong to groups that make folded figures from dried teabag paper. Some collect the many types of tea infusers made today, like the Yellow Submarine, dinosaurs, robots, monkeys, a berry on a stem and more. Most sell for under $20. Another tea-related collectible is the spout strainer, a small hanging strainer kept in a teapot spout with a large hairpin-shaped wire. There are also tea sets, tea cups and saucers, tea caddies, tea strainers, tea-caddy spoons, bag squeezers, “spoon rests” for used teabags, drip bowls and even a plastic disk that folds to squeeze a teabag or cover a cup to keep tea warm.

At a 1970s tea collector’s auction, we bought tea balls and strainers, notebooks filled with postcards about tea, books, woodblock prints and advertising. We also have the original patent papers for the “teastir,” a perforated aluminum-foil rectangle filled with tea. One side becomes a handle to take it out of a cup. It was invented by Ralph Kovel, a tea drinker and collector.

Q: I have a bed made by Sligh Furniture Co. of Grand Rapids, Mich. What can you tell me about the company?

A: Sligh Furniture Co. was founded in 1880 by Charles Sligh, who had previously worked at Berkey & Gay, another Grand Rapids furniture manufacturer. The city was a major center of furniture-making from the late 1800s until about 1925. Most furniture companies at that time didn’t make complete bedroom sets but specialized in one category of furniture, such as beds, dressers or nightstands. Sligh was the first company to sell all the pieces needed to furnish a bedroom in matching styles and finishes. The company struggled during the Depression and by 1933 switched to making desks, which cost less to produce. The company is still in business, currently making home entertainment and home office furniture and accessories. Sligh bedroom sets were made in the 1920s and 1930s.

Q: Back in about 1955, a World War II veteran friend gave me a small bronze sculpture of a horse mounted on a marble base. It’s signed “K Mobius” near the horse’s rear legs. The sculpture, including the base, is 10 1/4 inches high and 9 inches from nose to tail. What can you tell me about the sculptor and my horse?

A: Your bronze was made by German sculptor Karl Mobius (1876-1953). Artists who create bronze sculptures actually work with clay or wax. Then the sculpture is taken to a foundry, where a complicated process begins. A rubber mold of the sculpture is made, then wax is poured into the mold to create a hollow wax model that matches the original sculpture. A ceramic coating is then applied to the wax and the model is fired so the wax melts. The ceramic shell that’s left is filled with molten bronze, cooled and removed. The resulting bronze sculpture is then ground and polished. The mold for a small bronze like your horse is usually used about 25 times before it wears out. In general, an original bronze sculpture the size and age of yours sells for about $500.

Q: We own a large wooden picture frame with extensive gold-colored metal embellishments. We were told the frame was “a Tiffany” and that it hung in the Arkansas governor’s mansion in Little Rock during the one year (1927-28) John Martineau was governor. What do you think the frame would be worth if the story is true?

A: We can find no reference that says Louis Comfort Tiffany ever made wooden frames. And everything he did make was marked in some way to identify it as “Tiffany.” It is possible that Tiffany & Co., the famous store, sold a frame like yours, but we think the store would also have marked the frame. The histories of some antiques and collectibles become garbled over the years. Still, a large, well-made and elaborately decorated period frame could sell for thousands of dollars.

Tip: Attach hanging wire to a picture two-thirds of the way up the back of the frame. Be sure the wire does not show above the top of the frame when the picture is hung.

Kovels’ American Collectibles, 1900 to 2000 is the best guide to your 20th-century treasures—everything from art pottery to kitchenware. It’s filled with hundreds of color photographs, marks, lists of designers and manufacturers and lots of information about collectibles. The collectibles of the 20th century are explained in an entertaining, informative style. Read tips on care and dating items and discover how to spot a good buy or avoid a bad one. And learn about hot new collectibles and what they’re worth so you can make wise, profitable decisions. The book covers pottery and porcelain, furniture, jewelry, silver, glass, toys, kitchen items, bottles, dolls, prints and more. It’s about the household furnishings of the past century—what they are, what they’re worth and how they were used. Out-of-print but available online at Kovels.com; by phone at 800-303-1996; or send $27.95 plus $4.95 postage to Kovels, Box 22900, Beachwood, OH 44122.

Nevada Supreme Court rules felons may not own antique guns