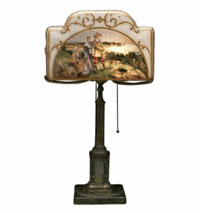 Pilgrims are painted inside the glass shade on this 24 3/4-inch-high Pairpoint lamp. It sold at Brunk Auctions in Asheville, N.C., for $4,140.

Electric lamps with glass shades were popular from the 1870s to the 1920s. Unlike a candle flame, a lightbulb could face down and was not too hot for a shade with a closed top, making the use of glass shades possible. And as up-to-date, unusual and attractive objects, glass-shaded lamps became expensive status symbols.

It is said that Louis Comfort Tiffany was the first to make a lamp with the light focused down. The lamp looked like a group of lilies with drooping heads made of iridescent glass. He is best known for his lamps with dome-shaped leaded-glass shades made of colorful pieces of glass.

Another famous lamp maker of the time was the Pairpoint Manufacturing Co. of New Bedford, Mass. The company, founded in 1880, originally made coffin fittings, but it soon became the largest manufacturer of silver-plated wares in the United States. In 1894, it merged with its next-door neighbor, the Mount Washington Glassworks. Pairpoint then made glass, silver plate and lamps. The two most desirable types of Pairpoint lamps today have reverse-painted glass shades or molded glass shades, now called “puffies.”

In the 1930s, the company reorganized and changed its name and products, but remains in operation. The reverse-painted shades were decorated on the inside by artists, who signed their shades. Lamps also carried a trademark that included the word “Pairpoint.” Lamp bases were made of metal or wood, and these also were signed. A Pairpoint lamp with reverse-painted scenes of pilgrims, sailing ships and flowers sold in 2008 for $4,140 at Brunk Auctions in Asheville, N.C. Its rectangular shade is 13 inches wide, and its base is cast metal.

Q: Eleven years ago, a friend gave me her antique sideboard. She said someone had offered her $3,000 for it, but she preferred to give it to me. Inside one of the drawers, there’s a round metal label that pictures a bust of George Washington and says “Royal Furniture Co., Grand Rapids, Mich.” What can you tell me about the company?

A: The Royal Furniture Co. was in business in Grand Rapids from 1892 to 1931. Robert Irwin bought a controlling interest in the company in 1901. In 1919, Irwin combined Royal with the Phoenix Furniture Co., also of Grand Rapids, to form the Robert W. Irwin Co. The “Royal” and “Phoenix” brand names were used until 1931. The metal label on your sideboard dates it to about 1914. Royal specialized in making expensive dining room, living room, library and bedroom furniture in period revival styles. Pieces were well-made, often of imported wood, and many had hand-painted decorations and marquetry. The Irwin Co. closed in 1953. Your friend was offered a very high price for the sideboard 11 years ago. It would sell for less today.

Q: Can you tell me anything about an Ohio pottery called Morley?

A: There were at least three early Ohio potteries that included the name “Morley.” Morley, Godwin and Flentke operated in East Liverpool from 1855 to 1878. George Morley, one of the five partners in that firm, left in 1878 and, with two other partners, founded another pottery, Morley & Co., in nearby Wellsville, Ohio. Morley & Co. made traditional ironstone dinner and toilet wares as well as majolica pitchers. When Morley & Co. dissolved in 1884, George Morley returned to East Liverpool and started a third company, George Morley and Sons, and again made ironstone and majolica. That company went bankrupt in 1891. Most of the marks of these companies include the name Morley, although some are marked just “M & Co.” or “G.M. & Sons.”

Q: I have a large pin with a very fancy jeweled top and a shaft that is about 8 inches long. What could it have been used for?

A: You probably have a hat pin. From about 1880 to 1920, huge hats were popular. Hair was piled high on the head so the hat could cover part of the hair and be held in place by hat pins. The pins were long – 6 to 12 inches – and some people thought they could be used as weapons. A judge once ordered the women in his courtroom to remove their hats. There were even laws limiting the length of pins to 9 inches. Shorter pins, closer to the size of today’s corsage pins, were used in the 1940s when small hats made to sit at the back of the head were in style. These hats were pinned to hair that was combed flat.

Q: My figurines of an Asian man and woman carrying bowls are marked on the bottom with the name “Heidi Schoop.” The figures are each 11 1/2 inches high, and their clothes are glazed in black and a muddy yellow. How old are they? They look modern.

A: Heidi Schoop fled Nazi Germany in the 1930s and went to Hollywood. She made plaster dolls, then pottery figurines and bowls. Her pieces were not only decorative, but also useful as flower holders, candlesticks or even soap dishes. Her company, Heidi Schoop Art Creations, was in business from 1942 to 1958. Many of her pieces were marked only with a paper label, which probably has disappeared. She died in 1996. A Heidi Schoop figurine sells today for about $100 to $125.

Tip: If you must clean silver in a hurry and can’t find silver polish, try toothpaste or hot sauce, or rub it briskly on a piece of carpet.

Take advantage of the expertise of the Kovels. For free price information, go to www.kovels.com and register by giving us your e-mail and street addresses. See more than 700,000 free prices for antiques and collectibles. You can also ask to receive a free weekly e-mail with updates and the latest information on the world of collecting.

Keep up with changes in the collectibles world. Send for a FREE sample issue of our 12-page, full-color newsletter, “Kovels on Antiques and Collectibles,” filled with prices, news, information and photos, plus major news about the world of collecting. To subscribe at a bargain $27 for 12 issues, write Kovels, P.O. Box 420347, Palm Coast, FL 32142; call 800-571-1555; or subscribe online at Kovels.com.