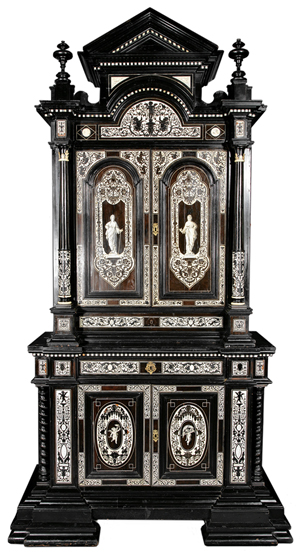 This Renaissance Revival cabinet, made in the mid-19th century, couldn’t be made today because of laws protecting endangered species. And most homes are not built with high enough ceilings for a cabinet that’s more than 9 feet tall. This walnut, ebony and ivory cabinet sold for $7,200 at a Neal Auction Co. sale in New Orleans.

Some furniture styles are so popular that they are copied by cabinetmakers for hundreds of years. Some copies are easy to recognize as copies because their construction is modern—new nails, machine-made mortise-and-tenon joints holding drawer parts together, telltale marks made by modern saws rather than the marks left by antique hand tools.

Well-made used copies, sometimes more than 100 years old, are selling for almost as much as similar brand-new pieces. Decorators want the “look.” Serious collectors would like to have an authentic of-the-period antique cabinet to display antique porcelains, but it can be very expensive. They save money by buying a newer cabinet so they can spend money on antique porcelains.

A 2011 Neal Auction Co. sale in New Orleans offered a mid-19th-century cabinet in the Renaissance (1460-1600) style made of expensive Circassian walnut with ebony and ivory trim. Today’s endangered-species laws have banned the use of most types of ebony and elephant ivory. The cabinet was a good copy, heavy and rectangular. It had a base, columns, moldings, finials, carvings, paneled doors, elaborate decorations and about 15 drawers and four doors. Some experts say cabinets like this were made to resemble imaginary buildings. The cabinet sold for $7,200. A new cabinet similar to this would cost well over $10,000, and a 15th-century piece probably couldn’t be found for sale.

The collector’s rule is: Study the best there is in museums and buy the best you can afford.

Q: My hand-painted red-and-gold Limoges plate has two green marks on the back. One is “Limoges” with a line under it and the word “France” under the line. The other is a round green mark with “Limoges, France” on the circumference of the circle and “B. & H.” across the diameter. What can you tell me about its age and maker?

A: The first mark was applied under the glaze by the company in Limoges, France, that manufactured and decorated your plate. So far, researchers have been unable to identify the company that used the mark, or perhaps more than one company used it. The “B. & H.” mark, applied over the glaze, was used in the early 1900s by Blakeman & Henderson, a French exporting company with a reputation for selling high-quality porcelain. Depending on decoration and condition, Blakeman & Henderson plates sell for $100 to $200.

Q: I’ve been collecting beer mugs, old beer trays, beer advertising clocks and beer playing cards for my brother for years. All the items are old, and some of the brands don’t exist anymore. My sister-in-law says it’s all junk. Is this true, or are the items collectible?

A: What’s “junk” to some is collectible to others. Breweriana collectibles, which include anything relating to beer, are very collectible and easy to sell. Trays and clocks can sell for hundreds of dollars, but even labels, beer mats, playing cards and other paper items are collectible. Price depends on age, brand, rarity and condition. There are several clubs for collectors, including the Antique Advertising Association of America (www.pastimes.org), Brewery Collectibles Club of America (www.bcca.com) and National Association of Breweriana Advertising (www.nababrew.com).

Q: I am trying to help my grandmother figure out the value of a vintage Willie the Clown doll. Can you help?

A: Emmett Kelly (1898-1979) created his “Weary Willie” hobo clown character during the Depression. The sad-sack clown was a big attraction of the Ringling Brothers and Barnum and Bailey Circus throughout most of the 1940s and ’50s. Kelly played the same character in Cecil B. DeMille’s 1952 movie, The Greatest Show on Earth. Check any tags you can find on your grandmother’s doll. The best-known Willie the Clown doll was made in the 1950s by Baby Barry Toy Co. of New York. The doll was made in a few different sizes. We have seen the 21-inch version, wearing his original clothing, offered online for $75 to $100.

Q: We inherited an unusual liquor decanter when my parents died, and we would like to know more about it. It’s shaped like a knight’s helmet and is covered with leather. The leather is decorated with gold-colored lion’s-head fobs and gold-colored studs. It has a screw-type top and is 12 1/2 inches tall. The only mark or signature on it is the inscription on the bottom, “Brevettato, Made in Italy.” Can you tell us anything about this?

A: Your leather-covered decanter often shows up for sale on Internet sites. It evidently is one of a pair of decanters. The other one is a knight’s raised gloved hand holding a mace. A quick search turns up all kinds of things listed under “Brevettato,” including toys, lamps, pocket watches and clocks. “Brevettato” is the Italian word for “patented.” The maker of your decanter is unknown.

Q: I have a gold Mickey Mouse ring with sapphire eyes. I was told that it was made when Club 33 opened at Disneyland. Can you confirm?

A: Club 33, the private club located in Disneyland’s New Orleans French Quarter, has issued a lot of its own souvenirs since it opened in 1967. But all the Club 33 items we have seen are marked “Club 33” somewhere. Gold and silver (and gold-tone and silver-tone) Mickey Mouse rings have been made in abundance since Disneyland opened in Anaheim, Calif., in 1955 (and Disney World in Orlando, Fla., in 1971). Their collectible value is not as great as that of vintage Disney items made in the 1930s or ’40s. But if your ring is 14-karat gold, it’s worth its weight in gold.

Tip: Dry good glassware with a towel that has not been washed with fabric softener. The chemicals in the softener will leave a film.


Terry Kovel answers as many questions as possible through the column. By sending a letter with a question, you give full permission for use in the column or any other Kovel forum. Names, addresses or email addresses will not be published. We cannot guarantee the return of any photograph, but if a stamped envelope is included, we will try. The volume of mail makes personal answers or appraisals impossible. Write to Kovels, Auction Central News, King Features Syndicate, 300 W. 57th St., New York, NY 10019.

Keep up with changes in the collectibles world. Send for a FREE sample issue of our 12-page, full-color newsletter, Kovels on Antiques and Collectibles, filled with prices, information and photos, plus major news about the world of collecting. To subscribe at a bargain $27 for 12 issues, write Kovels, P.O. Box 8534, Big Sandy, TX 75755; call 800-829-9158; or subscribe online at Kovelsonlinestore.com. 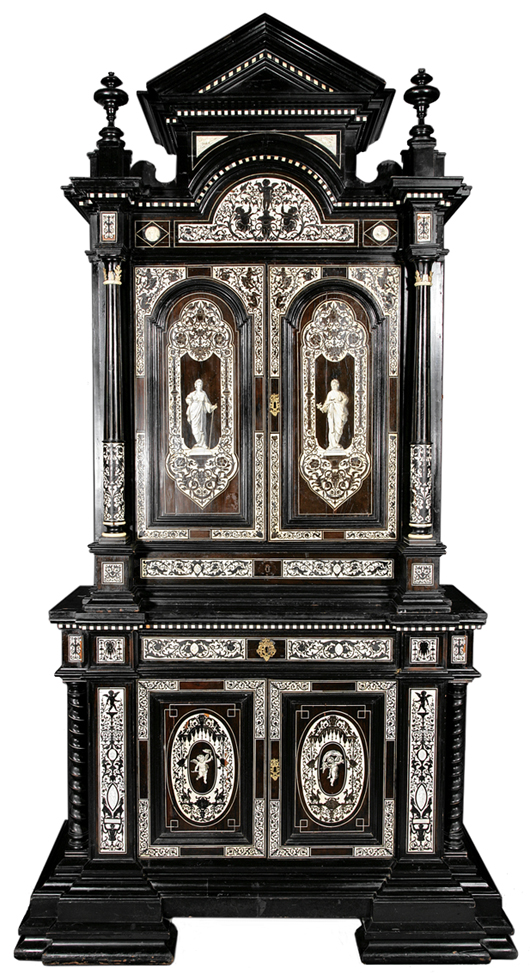 This Renaissance Revival cabinet, made in the mid-19th century, couldn’t be made today because of laws protecting endangered species. And most homes are not built with high enough ceilings for a cabinet that’s more than 9 feet tall. This walnut, ebony and ivory cabinet sold for $7,200 at a Neal Auction Co. sale in New Orleans.