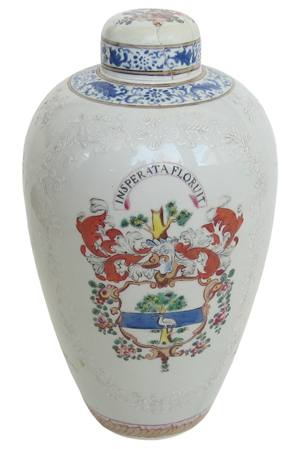 These urns were thought to be Chinese export pieces made in the 1700s, but they were made by Jacob Petit in France. Raised white lines are found on his 19th-century pieces.

BEACHWOOD, Ohio – The names of antiques sometimes change as research corrects old errors. In the 1930s, an auction house sold a pair of what were called “Lowestoft” vases that were large enough to put on a fireplace mantel. They were named after the English town where they were thought to have been made in the 18th century. The vases had a traditional Chinese shape and were made of bluish-white porcelain decorated with a blue, green and orange coat of arms and slightly raised white scrolls.

When the same vases were sold again in the 1950s, they were described as “Chinese export porcelain” because experts had learned that in the mid-1700s the Lowestoft factory was making early blue-and-white English Delft souvenirs of regional interest, not porcelain like the vases. Researchers also had learned that porcelain made in China in the 18th century was being exported to England and that some had made its way to Lowestoft. But the Chinese porcelain exported to the West back then, although very good, was not the top-quality porcelain made in China for wealthy Chinese families.

Some of the export pieces were plain, Chinese porcelain with added new decorations like coats-of-arms or pictures of ships. But there were also other problems with the pair of vases. The vases were not Chinese at all; they actually were copies made by Jacob Petit (1796-1868), who opened a shop in Paris in 1863. Painted raised white scrolls are the clue to identifying Petit’s copies of Chinese export porcelain. Petit also made copies of Sevres, Meissen, English dinnerware and more.

A: Bound volumes of Frank Leslie’s illustrated weekly, the first one published in the United States, often show up at shows and can be found for sale online. Leslie (1821-1880) was born in England and immigrated to the United States in 1848. He was an engraver and illustrator before he became a publisher, and his many publications are wanted by collectors not only for their historical value, but also for their wood engravings and early photographs. The price your volume could sell for depends on condition of the binding and of the newspapers themselves. We have seen early volumes sell for $50 to $200.

Q: I have had an old table cigarette lighter for about 30 years. It was old when I got it. It appears to be silver plate, but it’s heavy. It’s in the shape of a cornucopia, with the lighter at the top of the basket. There’s no mark on it. Can you identify and price it?

A: The Evans Case Co. of North Attleborough, Mass., made an unmarked silver-plated cornucopia table lighter like the one you describe. Evans was in business from 1922 to 1960, but table lighters were at their height of popularity in the 1930s and ’40s. That’s probably when yours was made. Other silver-tone cornucopia table lighters were made in Japan after World War II, but they’re marked “Made in Occupied Japan.” The irony is that both the Evans and Occupied Japan lighters sell for about $50 today.

Q: My grandmother gave me her antique water basin, a very large pitcher and a smaller, matching water pitcher. She said the smaller pitcher was for hot water. The wash-basin set was given to her as a wedding gift in 1907. All three pieces are plain white. On the bottom, each piece is marked “Yale” in gold on a banner. Since this set is a family heirloom, it will not be sold, but I would like to know the history of the company.

A: Wash sets like yours were used in the days before indoor plumbing. The large pitcher was used to pour water into the basin for washing, and the smaller pitcher was used when brushing teeth. The “Yale” mark was one of several marks used between 1882 and 1925 by the Potters Co-Operative Co. of East Liverpool, Ohio. The company made hotel ware, white ware and some decorated ware. The name of the company became Dresden Pottery Co. in 1925. It went out of business in 1927. Your set was made between 1882 and 1907.

Q: I have a pitcher marked “Lefton China, Hand Painted, Reg. U.S. Pat. Off.” The number “1773” is hand-painted on the bottom. It’s 10 inches high and decorated with applied pink roses, pale blue forget-me-nots and green leaves. Is it old and valuable?

A: George Zoltan Lefton emigrated from Hungary in 1939 and founded Lefton Co. in Chicago in 1941. The company imported pottery, porcelain, glass and other wares. George Lefton died in 1996, and the company was sold in 2001. The mark on your pitcher was used from 1949 until about 1955. The number 1773 may indicate that the pitcher was part of a limited edition. Value of your pitcher: about $20 to $25.

Tip: If you have stored a quilt, take it out twice a year and refold it – in half, if you had it in thirds before. This practice will prevent crease lines.

Special offer. Free gift bag when you buy The Label Made Me Buy It by Ralph and Terry Kovel. It’s a picture history of labels that once decorated products from cigar boxes to orange crates. The 320 full-color labels picture Indians, famous people, buildings and symbols. Learn how to identify and date labels or just enjoy the rare pictured labels (hardcover, 224 pages). Out-of-print but available at KovelsOnlineStore.com. By mail, send $40 plus $5.95 shipping to Kovels, Box 22900, Beachwood, OH 44122. Or call 800-303-1996. 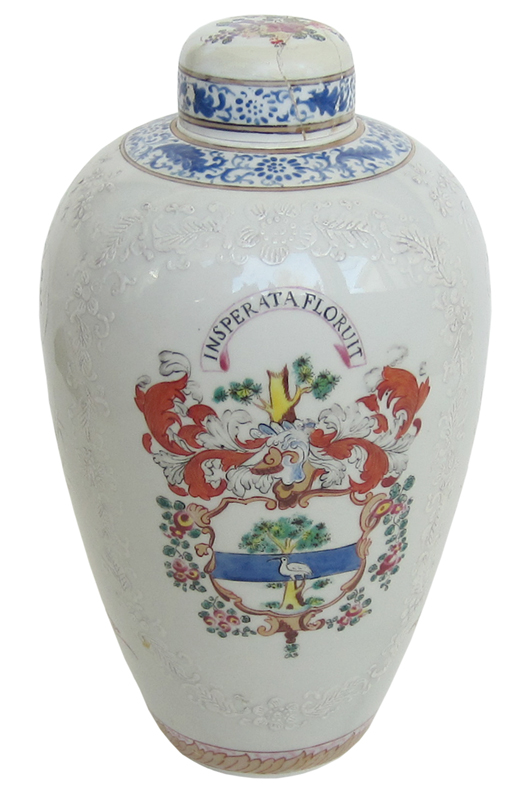 These urns were thought to be Chinese export pieces made in the 1700s, but they were made by Jacob Petit in France. Raised white lines are found on his 19th-century pieces.