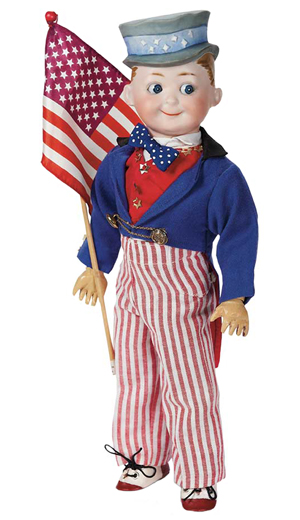 This Uncle Sam was made with googly eyes and a fancy cap, but no beard. This is a German doll made in about 1918, the year World War I ended. He is carrying a U.S. flag. The bisque doll, 14 inches high, sold for $2,350 at a 2012 auction hosted by Theriault’s of Annapolis, Md.

BEACHWOOD, Ohio – Flag Day is celebrated every June 14 to commemorate the day the flag of the United States was adopted in 1777. Flag Day was officially established in 1916 by President Woodrow Wilson. It became “National Flag Day” by a 1949 Act of Congress. Flags should be flown the whole week of June 14. Collectors of old flags display them framed under glass to protect them because they are such important historic relics and are usually in poor condition. But even a torn flag connected to an important event or person is of value, often worth thousands of dollars. An 1863 35-star U.S flag auctioned this year at Cowan’s of Cincinnati for $705. It had scattered holes and stains. One way to celebrate Flag Day is to put a vintage doll with a flag in your window. An “Uncle Sam” bisque doll made about 1918 by Handwerck, a German company, sold at a 2012 Theriault’s auction for $2,350. The doll was holding an American flag with 48 stars on it.

Q: In 1945 I received six place settings of English “fish eaters.” They were a wedding gift from my aunt, who had owned the set since she got married. So the set is close to being “antique.” They’re marked, but I can’t read the mark, and they have bone or ivory handles. What do you think the set is worth?

A: A single set of fish eaters (also called “fish feeders”) is a matching fish knife and fish fork – utensils designed to use when eating fish. A fish knife’s blade is flat and does not have a sharp edge. It’s slightly curved on both sides – one side curved inward and the other out. A fish fork has three or four flat unsharpened tines, with the outer tines wider than the inner. A set of stainless-steel fish eaters with plastic handles would sell for under $100. A set made of sterling silver with ivory or bone handles is worth several hundred dollars. Ask someone to try to read the maker’s mark for you. That may help determine the value.

Q: I own a small plastic souvenir snow globe of the New York City skyline. Inside there’s the Empire State Building, the Statue of Liberty and the Twin Towers that came down in 2001. It is marked “Made in Hong Kong.” Does it have collectible value?

A: New York City’s skyline with the Statue of Liberty is probably the world’s most widely produced snow globe subject. Plastic globes were introduced in the 1950s, but construction of the Twin Towers wasn’t completed until the early 1970s. So your globe isn’t more than about 40 years old. While the Towers make your globe a touching souvenir, it would not sell for more than about $10. Too many were made to warrant a high price.

Q: I just bought a deep cast-iron skillet at an auction. I’m trying to find out what it’s worth. The bottom of the pan is stamped “Martin Stove and Range, Florence, Alabama.” The lid has an ornate handle and is stamped “No. 9.” I’d like to find out something about the maker, too.

A: Brothers W.H. Martin and Charles Martin founded Martin Stove & Range Co. after buying two other stove companies in 1917. The new company made cast-iron hollowware from 1917 until 1952. Skillets, kettles, griddles, pans, sad irons and other items were made. Skillets were made in eight different sizes and sell today for prices based on size and condition. Recent prices go from about $10 to more than $50. Only a few sell for higher prices. Whatever your winning bid was at the auction is probably the wholesale price for the skillet. It probably would sell for more in a shop.

Q: I have a 1940s Clip-Craft erector set in its original cylindrical box. I can’t find any information about the set and hope you can help.

A: Your construction set was made by Clip-Craft Corp. of New York City. It was written up as a new toy in the December 1947 issue of Popular Science magazine. The set includes curves and rods, steel clips, aluminum sheets and wooden wheels. Pieces are held together by the clips rather than by nuts and bolts. The term “Erector Set” is a brand name trademarked by Alfred C. Gilbert, who patented his metal construction set in 1913. Gilbert’s sets, made by the A.C. Gilbert Co. of New Haven, Conn., starting in 1916, were assembled with nuts and bolts.

Q: My cow creamer has been in our family for decades. Cream in the pitcher pours out of the cow’s mouth, and the handle is its tail. The cow, which is in a sitting position, is about 5 inches tall. The bottom is marked “Coventry, Made in U.S.A.” and “5540B” in gold-colored ink. What is it worth?

A: Carrie Daum opened an artware business in Barberton, Ohio, in 1932. She called her business Dior Studios until 1936, when she changed its name to Coventry Ware, Inc. In 1940 Daum added ceramic figurines and artware to her earlier lines of composition and plaster products. Your creamer and similar pieces, many made with gold-painted highlights, most likely date from the 1940s. And the creamer probably was designed by artist Elaine Carlock (1915-2012), who worked at Coventry before moving to Michigan in 1952. The 5540B mark is a shape number. Your creamer is collectible, but not rare. Depending on its condition and decoration, it would sell for $25 to $40.

Tip: Do not use self-adhesive tape, stickers or self-stick labels in a scrapbook. Eventually they will no longer stick to paper, and the old adhesive will leave marks.

Terry Kovel answers as many questions as possible through the column. By sending a letter with a question, you give full permission for use in the column or any other Kovel forum. Names, addresses or email addresses will not be published. We cannot guarantee the return of any photograph, but if a stamped envelope is included, we will try. The volume of mail makes personal answers or appraisals impossible. Write to Kovels, (Name of this newspaper), King Features Syndicate, 300 W. 57th St., New York, NY 10019.

New! Contemporary, modern and mid-century ceramics made since 1950 are among the hottest collectibles today. Our special report, “Kovels’ Buyers’ Guide to Modern Ceramics: Mid-Century to Contemporary,” identifies important pottery by American and European makers. Includes more than 65 factories and 70 studio artists, each with a mark and dates. Works by major makers – including Claude Conover, Guido Gambone, Lucie Rie, as well as potteries like Gustavsberg, Metlox and Sascha Brastoff – are shown in color photos. Find the “sleepers” at house sales and flea markets. “Special Report,” 2010, 8 1/2 x 5 1/2 inches, 64 pp. Available only from Kovels. Order by phone at 800-303-1996; online at Kovels.com; or send $19.95 plus $4.95 postage and handling to Kovels, Box 22900, Beachwood, OH 44122. 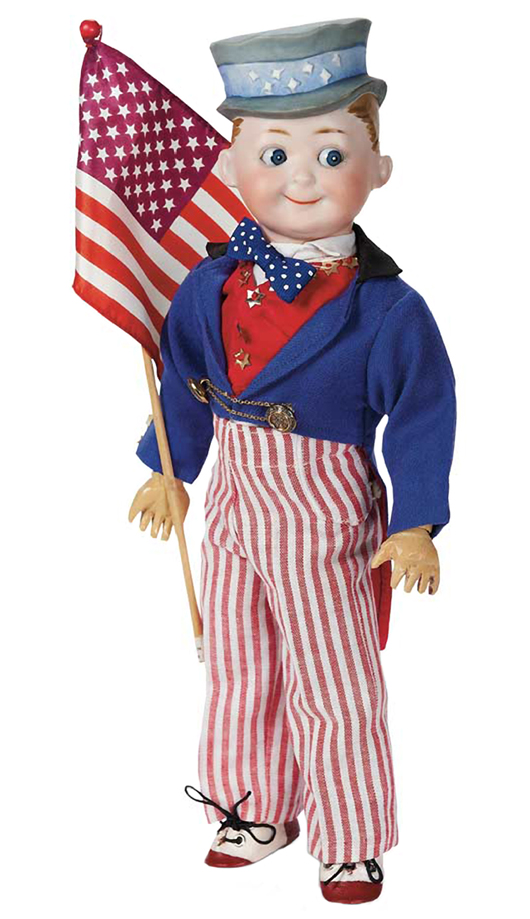 This Uncle Sam was made with googly eyes and a fancy cap, but no beard. This is a German doll made in about 1918, the year World War I ended. He is carrying a U.S. flag. The bisque doll, 14 inches high, sold for $2,350 at a 2012 auction hosted by Theriault’s of Annapolis, Md.