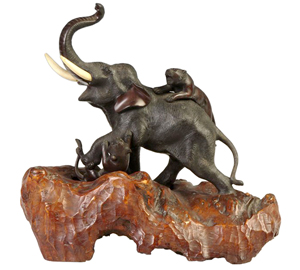 This signed Japanese bronze elephant sculpture with ivory tusks was made in about 1900 and sold in March 2014 at a Cottone Auctions in Geneseo, N.Y., for $920. If the suggested new antique ivory regulations become law, this antique bronze will be worthless because it will be illegal to sell it or even give it to a museum.

BEACHWOOD, Ohio – An heirloom bronze elephant with ivory tusks, great-grandmother’s piano with ivory keys, a vintage ivory chess set or an antique silver teapot with a small ivory inset in the handle to keep it cool may be “endangered” by proposed laws that could be in place sometime in June. Buying, selling or importing ivory from recently killed African elephants already is illegal and has been for about 25 years. But an executive order issued by President Barack Obama would extend the ban to include all antique ivory harvested from elephants that died before 1914. There would be a law forbidding sales, even gifts to museums, of any ivory, including antique pieces. This affects antiques dealers and collectors, knife makers and collectors, Inuit craftsmen, owners of mahjong and chess sets, and manufacturers of musical instruments, including guitars and violins – the list could go on.

And those in favor of strong endangered species laws want to also insist that all confiscated antique carved ivory art be destroyed – not even given to a museum. Already thousands of pounds of ivory art objects have been destroyed. This will cause huge losses to companies, collectors and museums. Express your opinion in this controversy. There’s still time to contact your U.S. senator, representative or the Fish & Wildlife Service to make your thoughts known. For links to more detailed information, go to www.kovels.com/latest-news/new-ivory-ban.html.

Q: My bedroom suite has a chest of drawers and dresser made of light wood. They are marked “Birchcraft by Baumritter.” Does the suite have any value other than as used furniture?

A: Baumritter Corp. was founded by Theodore Baumritter and his brother-in-law, Nathan Ancell, in New York City in 1932. The company sold housewares. Baumritter and Ancell bought a furniture company in Beecher Falls, Vt., in 1936. The company introduced a 28-piece line of “Ethan Allen” furniture, named after the Revolutionary War hero, in 1939. The name of the company became Ethan Allen Industries in 1972. Furniture with a modern look and light color is bought by those wanting a ’50s look and sells for a little more than other used furniture.

Q: I bought a heavy glass vase at auction several years ago. It’s 14 1/2 inches tall and 7 inches wide. The signature on the back is “Legras.” The vase is decorated with trees around a lake. The orange-colored sky and reflection in the lake look like it is sunset or sunrise. When light shines through the glass, it looks like the sun is shining through the trees. Can you tell me anything about the maker and the vase’s value?

A: Auguste Legras founded his glassworks at St. Denis, France, in 1864. Legras is known for its cameo glass and enamel-decorated glass in Art Nouveau designs. The company merged with Pantin in 1920. Legras vases sell for a few hundred to over a thousand dollars. A vase with a similar scene sold at auction for $355 earlier this year.

Q: My mother left me her complete set of Salem China. It was a wedding gift, and she may have used the china once or twice through the years. I have used the dishes a couple of times since she gave them to me. All the pieces are perfect. They’re decorated with a central bouquet of colorful pastel flowers. The mark on the bottom is a small circle with the word “Salem” inside it and a coffee cup in front of it. Under that are the words “Princess Margaret, 23 K Gold, 51 Y.” Please estimate a value for the set.

A: Salem China Co. manufactured dinnerware in Salem, Ohio, from 1898 to 1967. The mark on your dishes dates the set to 1951, the year before Princess Margaret’s older sister, Elizabeth, became Queen of England. Salem China named the pattern to take advantage of Americans’ fascination with Great Britain’s royal family. The Princess Margaret pattern is not a common one. A 12-piece set of dishes in the pattern recently sold online for $225.

Q: My World’s Fair souvenir is unusual. It’s a little booklet titled “New York World’s Fair 1939 Needle Book” and holds all 90 of its original needles inside. The color design on the front is of the fair’s Trylon and Perisphere. The booklet, marked “Copyright Pilgrim Needle Co.,” is about 6 3/4 by 4 1/2 in. Is it worth anything?

A: New York’s 1939 World’s Fair is one of the most popular among collectors of World’s Fair memorabilia. But your needle book, while unusual, is not rare. Several versions were handed out at the fair. Most of them sell today for $5 to $10.

Q: I have some beer cans my father got at his 25th college reunion at Harvard in 1964. Are cans for special events like this collected? I know a very small number were made.

A: Beer can collectors like to specialize by brand, city, size, shape or other differences in cans. There are collectors of college and high school reunion beer cans and bottles, but prices are determined by condition and rarity. Unless you are a very serious collector of these cans, it is difficult to judge rarity. Buy or trade for those that interest you for fun – but not for profit.

Tip: To keep scrapbooks from deteriorating, store them away from strong light, heat and moisture.

The Kovels have navigated flea markets for decades. Learn from the best. “Kovels Flea Market Strategies: How to Shop, Buy and Bargain the 21st Century Way,” by Terry Kovel and Kim Kovel, tells you about the latest smartphone apps and websites to help you shop, share and ship as well as what to wear, what to bring and, most important, how to negotiate your way to a bargain. Also find tips on spotting fakes, advice about paying for your purchases and shipping suggestions. Full color booklet, 17 pages, 8 1/2 by 5 1/2 in. Available only from Kovels for $7.95 plus $4.95 postage and handling. Order by phone at 800-303-1996; online at Kovels.com; or mail to Kovels, Box 22900, Beachwood, OH 44122. 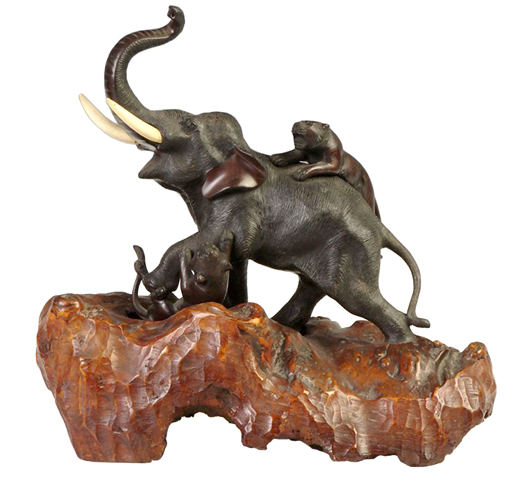 This signed Japanese bronze elephant sculpture with ivory tusks was made in about 1900 and sold in March 2014 at a Cottone Auctions in Geneseo, N.Y., for $920. If the suggested new antique ivory regulations become law, this antique bronze will be worthless because it will be illegal to sell it or even give it to a museum.