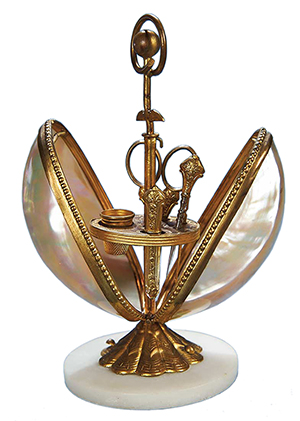 This French mother-of-pearl ‘egg’ is a ‘necessaire’ that holds sewing tools. The 6-1/2-inch-high piece was made in about 1875 and holds an awl, scissors, needle case and thimble. Price at a Theriault’s auction in January 2014 was $1,064.

BEACHWOOD, Ohio – The skill of sewing with a needle and thread was required in the centuries before the sewing machine was invented. A machine, probably the first, was used in England in 1715, and another was patented in 1844. But the Elias Howe (1845) and Isaac Singer (1851) machines were the ones that gained fame and sold by the thousands.

Women were expected to hand-embroider monograms on bedding and towels, cut and sew parts of a dress properly, and be able to mend. The mistress of the house was expected to sew in the evening, and equipment and fabrics were stored in a table in the living room near a fireplace. The wealthy of the 19th century had tools, scissors, bobbins, tape measures, thimbles and more made of gold or silver, stored in a fancy case.

Twentieth-century housewives had metal or plastic tools and a sewing machine. At a January 2014 Theriault’s sale, a collection of sewing utensils brought high prices. A tape measure shaped like a sewing machine sold for $504. An English silver piglet topped by a purple velvet pincushion sold for $224. And a cash-metal thimble with brass finish sold for $112. Look in Grandma’s sewing basket and junk drawer. There may be sewing treasures hidden there.

Q: I have a pottery casserole dish stamped with a Wilkinson Royal Staffordshire mark. I think the casserole dates to the 1890s from what I have learned about the mark. It has a gold-colored pattern around the edge of the base and lid. I’m wondering what it’s worth.

Q: My mother bought a rocker at a Goodwill store in the 1960s for about $10. When we brought it home, Dad found a crest and date under the seat. It says “S. Bent & Bros., Inc., Gardner, Mass., 1867.” It’s still sturdy, although the arms have been imperceptibly braced where they meet the seat and the paint is worn down where the hands rest. Can you tell me something about the maker and an approximate value?

A: S. Bent & Bros. was founded in 1867 by Samuel, Charles and Roderic Bent. The company made Colonial-style furniture. The company closed in 2001. The furniture was mass-produced and a rocker sells for about $50 to $75 today.

Q: I own an antique Snoopy candy jar. It’s glass with a color picture of Snoopy on it. Is it worth anything?

Q: I have a glass butter churn, approximately 14 inches tall and 6 inches in diameter, with a metal lid and crank churning mechanism on the top. It has wooden paddles that do the work. The glass is embossed “Dazey Churn No. 40, Patented Feb. 1922, Dazey Churn & Mfg. Co., St. Louis, Mo., Made in USA.” What is it worth?

A: Nathan Dazey became manager of the EZ Churn Co. of Dallas in 1904. He bought out the owner a couple of years later and moved the company to St. Louis. Dazey was granted a patent for improvements to small churns for household use on Feb. 14, 1922. The company was sold in 1947. Reproductions of the churn have been made. Dazey made 1, 2, 3 and 4 quart churns given Nos. 10, 20, 30 and 40. Smaller churns are reproductions. Vintage Dazey No. 40 churns sell for about $100.

Q: I own many beautiful items I would like to sell, but I’m not sure about finding a good antiques buyer in my city. I have lost two good Oriental rugs through consignment. When I called to check on my rugs, the owner told me they had been donated and I never received any money. Please give me some advice. I’m not originally from the area where I live now.

A: Before taking any of your antiques to a consignment shop, check on the shop by contacting your local Better Business Bureau. Never give anything to someone to repair, restore or sell without first getting a signed receipt that includes a detailed description of the items and states what you want the shop to do with them. Some places accept items for donation as well as for consignment. Be sure you are specific about what you expect. Some shops have policies that allow them to dispose of items if you don’t pick them up within a certain length of time. Be sure you understand what their policy is before you leave your items. If you feel the business has been dishonest, file a complaint with the bureau. To find your local Better Business Bureau, go to BBB.org.

Tip: Never wash plastic dishes in the dishwasher. They may warp.

Keep up with changes in the collectibles world. Send for a free sample issue of our 12-page, color-illustrated newsletter, “Kovels on Antiques and Collectibles,” filled with prices, news, information and photos, plus major articles and opinions about the world of collecting. An important tool for anyone who buys or sells antiques and collectibles. To subscribe at a bargain $27 for 12 issues, write Kovels, P.O. Box 8534, Big Sandy, TX 75755; call 800-829-9158; or subscribe online at KovelsOnlineStore.com. 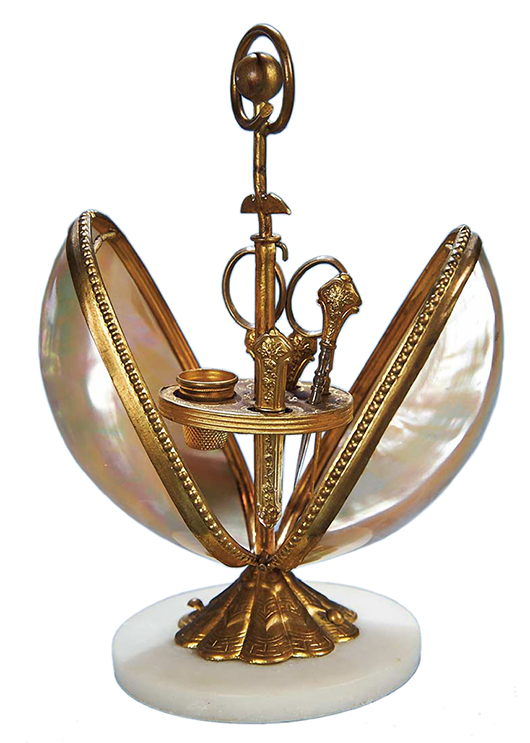 This French mother-of-pearl ‘egg’ is a ‘necessaire’ that holds sewing tools. The 6-1/2-inch-high piece was made in about 1875 and holds an awl, scissors, needle case and thimble. Price at a Theriault’s auction in January 2014 was $1,064.