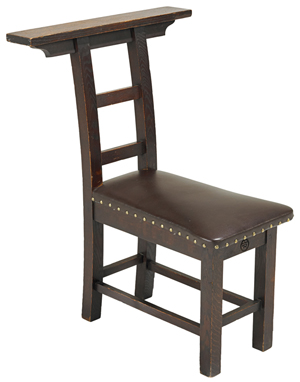 The strange back on this Roycroft chair can be explained by its name,

BEACHWOOD, Ohio – Some old chairs have very strange added parts that can confuse today’s collectors. A Windsor chair from the 18th century might be made with an added piece at the end of the arm because it is a “writing arm” Windsor. There can be a drawer beneath the seat of a Shaker sewing chair. Many types of chairs were made into rocking chairs with the addition of pieces of curved wood or a bouncy platform with springs. A chair with paddlelike arms and a rectangular wooden piece attached to the back at an angle is known as a “cockfighting chair.” It was thought the user sat facing the back of the chair to see the fight, but now it is believed that the wooden piece was meant to hold a book and that the chair is a “reading chair” once used in libraries. A similar chair was made by the Roycroft Colony in East Aurora, N.Y., in about 1905. It had a narrow ledge at the top of the chair back. The user sat facing the back and straddling the chair, with arms leaning on the leather-covered wooden ledge. It is a meditation chair. There is a modern group at the Roycroft Colony today that is interested in art and meditation.

Q: My 1910 telephone is in excellent shape. A label on it reads, “Property of the American Bell Telephone Co.” What is the phone worth?

Q: I have some Olin Russum Pottery and would like to know something about it. Is it collectible?

A: Olin Lansing Russum Jr. (1918-1998), known as “Russ,” was a potter and sculptor who lived and worked in Maryland. In 1951 he and his wife, Jean, built a studio in a converted barn near Gunpowder Falls. Russ made dishes, sculptures and watercolors, but is best known for his tile and bas-relief murals. His murals are in several buildings in the Baltimore area, and some of his work is in museum collections. He also taught a ceramics workshop at the Baltimore Museum of Art. Jean was a woodworker who made sculptures and furniture. They worked together on some projects until her death in 1986. Their work has been sold in several recent auctions and can be found in shops.

Q: My pottery stein holds a half-liter. It’s in the shape of a child wearing a monk’s hooded habit. He’s holding a couple of radishes or turnips in his left hand and what appears to be a book in his right. His head, the stein’s lid, has a pewter rim. Down the front of the child’s clothing there’s a long bib with the words “Gruss aus Munchen.” The only mark on the bottom is “1880.” What is the stein worth?

A: You have a “Munich Child” character stein. The “bib” down his front is a scapular, a traditional part of a monk’s garb, and the German phrase on the front can be translated roughly as “Regards from Munich.” The design is based on the German city’s coat of arms. Munich Child mugs, which can be in the traditional stein shape or figural, like yours, were first made in the last half of the 19th century. A mug like yours sold in 2011 for $334.

Q: I still have the portable Brother typewriter my father bought for me 40 years ago. I have kept it stored in its original carrying case and it still works. I wonder what it’s worth.

A: With few exceptions, only very early typewriters -those made and marketed in the late 1800s – sell for much money. Brother Industries, a Japanese corporation that dates back to 1908, still is in business today manufacturing printers, fax machines and other office and industrial equipment. Portable electric typewriters like yours don’t excite collectors, but you might be able to sell it online for up to $20.

Q: I found a funny pair of pins that look old. Each metal pin is in the shape of a man thumbing his nose at the other. One is wearing a hat with the word “Hancock,” and the other, a bearded man, has a hat that reads “Garfield.” Can you explain what is going on?

A: You have a pair of political lapel pins made for the Winfield Hancock and James Garfield 1880 U.S. presidential campaign. The gold-colored Hancock pin could thumb his nose, and the silver Garfield pin, often found blackened with tarnish today, could thumb his nose while a pointed tail appeared. Similar “nose-thumbers” were used in at least one other presidential election, the one between James Cox and Warren Harding in 1920.

Tip: When looking up a pewter mark, don’t just check pewter books. Try looking at a list of American silversmiths and

silver-plate makers. Many of these people worked with all three types of metal.

Terry Kovel answers as many questions as possible through the column. By sending a letter with a question, you give full permission for use in the column or any other Kovel forum. Names, addresses or email addresses will not be published. We cannot guarantee the return of any photograph, but if a stamped envelope is included, we will try. The volume of mail makes personal answers or appraisals impossible. Write to Kovels, (Name of this newspaper), King Features Syndicate, 300 W. 57th St., New York, NY 10019.

Spot great costume jewelry faster than anyone and get the buys of a lifetime. “Kovels’ Buyers’ Guide to Costume Jewelry, Part One” explains how to recognize mid-century costume jewelry, Mexican silver jewelry, modernist jewelry and other European and American pieces. Learn all the names you need to know, from Hobe and Sigi to Ed Wiener and Art Smith, from Coro and Trifari to Los Castillo and Spratling. And we explain how to recognize a good piece of genuine Bakelite. Our exclusive report, 8 1/2 x 5 1/2 inches, 46 pp., is filled with color photos, bios, background and more than 100 marks. It’s accurate and comprehensive and includes all of the information in our 2008 report on 20th-century costume jewelry. But it’s in a new, smaller and more convenient format. Available only from Kovels. Order by phone at 800-303-1996; online at Kovels.com; or send $25 plus $4.95 postage and handling to Kovels, Box 22900, Beachwood, OH 44122. 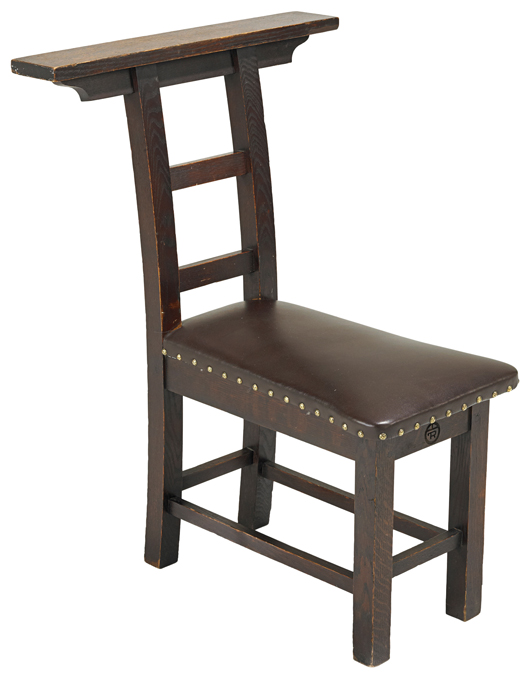 The strange back on this Roycroft chair can be explained by its name,