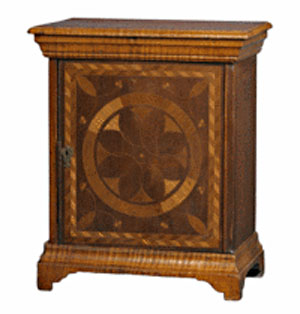 Spices were an important part of cooking in the days before refrigeration was available in most homes. Meat and fish were smoked, pickled, peppered, salted or treated with combinations of spices that kept the food from rotting. A home garden included spices, herbs and edible flowers, all plants that either made it possible to store food or made slightly spoiled food taste better. Fresh spices were used when in season, but most were dried and stored for use later in the year. Some, like salt, were not always found locally and had to be imported. In medieval times, herbs like tansy, rue, hyssop and pennyroyal were used, but today’s selection is more likely to be pepper, cinnamon, cloves, nutmeg and dozens of other flavorful spices. The spice box was an important piece of furniture kept near the cooking area. Sometimes it was made of tin, but most spice boxes were made of wood decorated with paint or inlay. An exceptional spice box from Pennsylvania dating from about 1750-1770 sold at a recent Skinner auction. It featured a compass design made of four different woods. It also had border designs. The box, about 21 inches high and 16 inches wide, had a door covering 10 tiger maple and one walnut drawer. The estimated price of $30,000 to $50,000 was surpassed when the buyer paid $90,000.

Q: I have a pink Kelvinator gas range made by American Motors. It was originally purchased in 1964 and still works perfectly. Is it worth anything?

A: Kelvinator Co. was founded in 1914 in Detroit as Electro-Automatic Refrigerating Co. The name was changed to Kelvinator in 1916 in honor of Lord Kelvin (1824-1907), the British physicist who defined the temperature known as absolute zero. The company merged with Nash Motors in 1937 to form Nash-Kelvinator Corp. Nash-Kelvinator introduced other appliances, including ranges, to its line of products after World War II. The company merged with Hudson Motor Cars Co. in 1954 to form American Motors Corp., and Kelvinator became a division of AMC. Today the brand is owned by Electrolux of Sweden. Your 1964 pink range is a collector’s item today because the retro look has become popular in kitchen design. That means your range, if in working condition, could sell for about $300 to $500.

Q: We recently came across a box of 40 cream-colored china dishes, all in the same pattern. The pattern consists of three decorative shields around the rim with the head of a woman in the center of the shield and a swastika on each side of the shield. Why the Nazi symbols? Were the dishes made or sold in Germany? The mark on the bottom of the plates is a narrow crescent moon around the words “The Crescent China Co.”

A: The Crescent China Co. was in business in Alliance, Ohio, from 1920 to 1926. This was well before the rise of Nazism in the 1930s, when the swastika became permanently linked with Germany’s National Socialist Party. By then, the image of the swastika had been around for thousands of years. It can be found on ancient pottery and coins. In the early 1900s, it became a popular symbol of good luck in the United States. We have seen a platter in your pattern selling online for $20. A 40-piece set might sell for $100 if the dishes are in excellent condition.

Q: We have an old wooden wall telephone made by Century Telephone Construction Co. of Buffalo, N.Y. There’s a 1905 patent date on it. The phone has all of its original components inside and is 100 percent complete. What is it worth?

A: Century Telephone Construction Co. was founded in Cleveland in 1899 but moved to Buffalo in 1902. In 1909 Century merged with the Federal Telephone & Telegraph Co. of Palo Alto, Calif., although the Century name continued to be used for a few more years. So your phone probably was made between 1905 (the patent date on it) and 1910 (just after the merger), but it may have been manufactured in the early 1910s. Wall telephones of that vintage in good shape sell for prices ranging from $200 to $600.

Q: My grandfather won a sterling-silver “President’s Cup” trophy at a harness race at Weequahic Park in Newark, N.J., on Oct. 30, 1909. I have a photo of my grandfather receiving the trophy, a tall cup with two handles and a cover topped by a large horse-shaped handle. I also have a copy of an article about the trophy that was published in the Oct. 9, 1909, Newark Evening News and a copy of an article about the race from the Oct. 31, 1909, Newark Sunday Call. My grandfather’s horse, Marique, won the race. The article about the trophy just says it was “designed and manufactured by local men.” Could it have been made at the Tiffany factory that was in Newark? And is the trophy valuable?

A: Your trophy is indeed valuable, if only because it is made of sterling silver, which is worth a lot at meltdown value today. But antique sterling-silver sporting trophies are collector favorites and can sell for $1,000 or more if they’re well-made and in good condition. There were a lot of silversmiths in the Newark area in the early 1900s, and you may never be able to identify who made your trophy. It’s unlikely it was made by Tiffany, though, because so many Tiffany trophies are known and marked.

Tip: Flags have been made of many different fabrics, so cleaning requires testing. A wool flag should be tested with a drop of water and blotting paper. If no color is removed, you can wash it in warm water with a wool-washing product. It can be dry-cleaned with care. Store a wool flag in an insect-proof container.

Terry Kovel answers as many questions as possible through the column. By sending a letter with a question, you give full permission for use in the column or any other Kovel forum. Names, addresses or email addresses will not be published. We cannot guarantee the return of any photograph, but if a stamped envelope is included, we will try. The volume of mail makes personal answers or appraisals impossible. Write to Kovels, Auction Central News, King Features Syndicate, 300 W. 57th St., New York, NY 10019. Go to Kovels.com/calendar to find and plan your antiquing trips or to post your group’s upcoming events.

New! Contemporary, modern and mid-century ceramics made since 1950 are among the hottest collectibles today. Our special report, “Kovels’ Buyers’ Guide to Modern Ceramics: Mid-Century to Contemporary,” identifies important pottery by American and European makers. It includes more than 65 factories and 70 studio artists, each with a mark and dates. Works by major makers, including Claude Conover, Guido Gambone and Lucie Rie, as well as potteries like Gustavsberg, Metlox and Sascha Brastoff, are shown in color photos. Find the sleepers at house sales and flea markets. Special Report, 2010, 8 1/2 x 5 1/2 inches, 64 pages. Available only from Kovels. Order by phone at 800-303-1996, online at Kovels.com, or send $25 plus $4.95 postage and handling to Kovels, Box 22900, Beachwood, OH 44122.

Billy the Kid image auctioned for $2.6M
Scroll to top