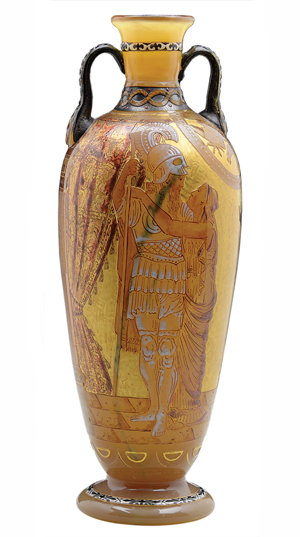 A gladiator and a maiden surrounded by a design of columns and drapes are shown on this Burgen, Schverer & Cie vase. The 9-inch vase was offered at a 2013 James Julia auction in Fairfield, Maine.

BEACHWOOD, Ohio – Cameo glass is popular with collectors. Galle, Thomas Webb, Mount Washington and Daum are well known, but some smaller companies that worked at the same time are almost unknown. Burgun, Schverer & Cie (son) was founded in 1711 in Meisenthal, France.

The company always made top-quality glass and survived by changing methods and designs to attract new customers. It made blown glass, watch glass, eyeglass lenses and tableware. By the 1860s, it was famous for its understanding of glassmaking. Emile Galle was an apprentice there before he left for his father’s company, and the two companies had a working arrangement for about 10 years. In 1895 Burgun, Schverer & Cie produced cameo glass by the new and less expensive method of painting layers of colored and clear glass and then carving them. It also made other art glass, including enameled and gilt vases, often with silver mounts. Burgun, Schverer & Cie won many awards for its glass, and in 1901 it became a public company.

It is now called Verrerie de Meisenthal. Its glass has long been marked with a hard-to-understand emblem that includes the Cross of Lorraine, a thistle and the letters BS & C on a banner. Look for cameo glass by Burgun, Schverer & Cie. It may be overlooked by those with less information about the glass’s quality and mark.

Q: I have four bentwood chairs that came from an old seminary. Underneath the seats there is a label that reads “J.S. Ford Johnson Co., New York, N.Y., 33 E. 47th St., Chicago, Ill., San Francisco, Calif.” They were patented in March 1910 and are in good solid condition. Can you tell me something about the history?

A: J.S. Ford Johnson Co. was founded in 1867 by John S. Ford and Henry W. Johnson. The company started out in Columbus, Ohio, moved to Indiana a year later and moved to Chicago in 1872. The company made Mission furniture, including some pieces similar to Stickley furniture. It was one of the largest manufacturers of chairs in the United States. The company went bankrupt in 1913 and was sold. Your set of bentwood chairs is worth about $600 if the chairs are in excellent condition.

Q: Is a rectangular yellow planter marked “Cookson 923” of any value?

A: Gerald Cookson founded Cookson Pottery Co. in Roseville, Ohio, in 1945. Garden ware, planters, vases and florist ware were produced. Cookson’s molds were made by Ungemach Pottery, another Roseville company, and the glazes were applied at Cookson Pottery. Cookson’s son took over the business in 1966. The business was sold in 1982 but continued to operate until 1995. Value of your planter: about $20.

Q: I have a pewter stein marked “F & M” over “N.” It’s 11 inches tall and has raised decorations of classical figures picking grapes from a vine. Can you tell me who made it and what it’s worth?

Q: My Brownie Target Six-20 camera is in excellent condition, never used, with the original box it came in. The camera is metal and the front is black and white with vertical lines. I’d like to find out how old it is and if film still is available. And how much is the camera worth?

A: Eastman Kodak Co. made the Brownie Target Six-20 from July 1946 until May 1952. The front of your camera is known as the Art Deco face. The camera originally came with a roll of 620 film. The film was discontinued in 1995, but rolls may be available from sources for out-of-production film. You can also use a roll of 120 film rewound onto a 620 spool, which is larger than a 120 spool. It takes two 620 spools to do this and must be done in a darkroom or darkbox so that no light touches the film. You can buy spare 620 spools online. The camera originally sold for $3.50. Today it sells online for $10-$25 without a box and $15-$40 with the original box.

Q: When I was rehabbing our garage, which was built in about 1917, I found a large piece of colorful cardboard in the old insulation. It looks like it was an advertising sign or perhaps the side of a breakfast food box of some kind. There’s a child’s face on it with the phrase “Toddy builds health and strength.” Can you help identify the ad? Does it have any value?

A: Toddy was a brand name for a “meal in a glass” sold by a Buffalo, N.Y., company named Maltop Inc. The milk-based drink, apparently meant for children, was heavily marketed in the eastern United States and Canada in the late 1920s, so your garage may not be quite as old as you think it is – or it was insulated a decade after it was built. The drink was sold in cans in grocery stores. Your cardboard piece may have been the side of a carton that once held Toddy cans. The most common Toddy-related collectible is a mixer-style drinking glass embossed with the brand name and a child’s face. The glasses sell for $10 to $20 online. Your ad would sell for only a few dollars. Why not frame it and hang it in your garage or kitchen as part of your house’s history?

Tip: Don’t wear jewelry while in a swimming pool. Chlorine makes it dull. If you are in the ocean, the glimmer of metal may attract unwanted fish.

Sign up for our free weekly email, “Kovels Komments.” Terry writes about the latest news, tips and questions and her views of the market. If you register on our website, there is no charge.

New! The Kovels.com Premium website is up and running. In addition to 900,000 free prices of antiques and collectibles, more than 11,000 with photographs, premium subscribers will find a dictionary of marks for silver and another for ceramics, with pictured marks and company histories. Premium membership also includes a subscription to the digital edition of our newsletter, “Kovels on Antiques and Collectibles,” and its archives, where you’ll find hundreds of articles about almost anything you might collect. Up-to-date information for the savvy collector. Go to Kovels.com and click on “Subscription” for more information. 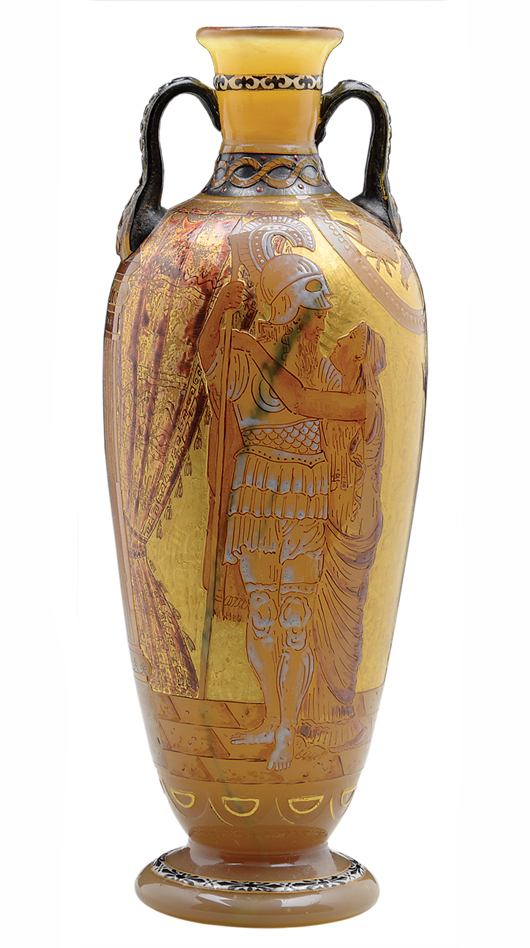 A gladiator and a maiden surrounded by a design of columns and drapes are shown on this Burgen, Schverer & Cie vase. The 9-inch vase was offered at a 2013 James Julia auction in Fairfield, Maine.