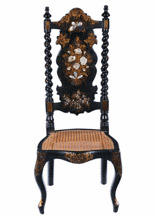 Mother-of-pearl inlay and painted and gilded decorations embellish this slipper chair probably made in England. The seat is 15 1/2 inches from the floor. The chair sold for $329 at a Sloans & Kenyon auction in Chevy Chase, Md., in November.

Getting dressed was more complicated for a well-to-do woman in the 19th century. She wore undergarments, a camisole, petticoats, a laced corset, long stockings, shoes, a dress and accessories. To help with this project, furniture designers invented the slipper chair for the bedroom. It’s a chair with short legs that put the seat about 15 inches from the floor instead of the more normal 17 to 18 inches. That meant it was possible to bend only slightly to reach your feet to put on slippers (shoes) and stockings. The slipper chair was not made until Victorian times. Earlier Chippendale and Sheraton chairs were all of regular height. Slipper chairs were made in all Victorian styles: Gothic Revival (1840-60), Rococo or Louis XV Revival (1845-65), Louis XVI Revival (1860s), Renaissance Revival (1850-75), Greco-Egyptian Revival (1860-90) and Eastlake (1870-1900). The chairs are still useful in the bedroom for those who have problems tying shoes or slipping into elasticized tights.

Although most slipper chairs were made of wood and covered with upholstery, some unusual chairs from England were decorated with black lacquer and mother-of-pearl inlay. They went well with the papier-mâché furniture popular in England in the 19th century. Because of its short legs, the slipper chair usually sells for less than the matching full-size chair in a bedroom set.

Q: I was given a Yellow Pages dress in its original mailing envelope. It cost 10 cents to mail. A direction sheet came with it. The dress looks like a little paper tent. Yellow Pages ads were printed on it. You could cut the hem to shorten it. The directions say the paper dress could get wet and the design would remain but not to wash the dress. It’s coated with a fire-resistant spray that will wash out. Does it have any value?

A: Paper dresses were popular for a very short time in the 1960s. The most famous was a dress with a design of Campbell Soup cans in the Andy Warhol style. It sells for hundreds of dollars to Warhol collectors. In 1966, Scott Paper offered to send you a free dress if you wrote requesting one. It was the Yellow Pages dress, a tent-shaped yellow dress printed with ads. It had a trimmed V-neck and came in a variety of sizes. Other paper dresses for adults and little girls were sold in retail shops. Many were available at beach resorts as temporary cover-ups. There were also paper nightgowns, sheets and even underwear. But they were scratchy and flammable, and soon lost favor because in those days many people smoked. A Yellow Pages dress like yours was on the Antiques Roadshow in 2006, when it was appraised for $1,800 to $2,200. But an ad online recently offered one for $300.

Q: My mother-in-law was working at the Fairmont Hotel in San Francisco when President Dwight D. Eisenhower stayed there. After his visit, she was given a plate with white ruffled edges, gold trim and two blue flowers at the top. His initials, “D.D.E.,” are printed in gold underneath the flowers. The back of the plate is marked “Shenango China, The Presidential Plane – Columbine.” Can you tell me something about this plate and what it might be worth?

A: Air Force One’s china plates were traditionally “liberated” as souvenirs by reporters traveling with the president and often show up at sales and auctions. President Eisenhower’s planes were named “Columbine” after the state flower of Colorado, where his wife grew up. Columbine III, the third plane named Columbine used by Eisenhower, was in service from 1954 until 1966. Shenango China made this pattern for Columbine III in 1956. A plate like yours sold at auction for $336 in 2008.

Q: My family’s old potbelly stove warmed up our house back in the 1930s. I had it restored and repaired, but I’d like to know more about the manufacturer, Abendroth Bros.

A: William Philip Abendroth (1799-1872) was a German immigrant who established an ironworks factory in Port Chester, N.Y. The company, Abendroth Bros., was in business at least into the 1920s and made not only stoves, but also boilers, yard pieces and other iron wares.

A: Your small folding ruler was made by the Chapin-Stephens Co. of Pine Meadow, Conn., between 1901 and 1929. Chapin-Stephens was formed in 1901 when H. Chapin’s Son Co. and D.H. Stephens & Co. merged. Both of those companies dated back to the middle of the 19th century. Chapin-Stephens was a large manufacturer of wooden rulers, planes and hand tools. It went out of business when the Depression hit. We have seen examples of your ruler offered for sale from $2 to $150. Most sell for about $10.

Tip: Keep a piece of white chalk in the drawer with your sterling or plated silver. It retards moisture and slows tarnishing.

Need more information about collectibles? Find it at Kovels.com, our Web site for collectors. Check prices there, too. More than 700,000 are listed, and viewing them is free. You can sign up to read the weekly Kovels Komments. It includes the latest news, tips, collectors’ questions and our answers – and it’s delivered by e-mail, free, if you register. Kovels.com offers extra collecting information and lists of publications, clubs, appraisers, auction houses, people who sell parts or repair antiques and much more. You can subscribe to “Kovels on Antiques and Collectibles,” our monthly newsletter filled with prices, facts and color photos. Kovels.com is written to add to the information in your newspaper and to help you find useful sources needed by collectors.

Go to our Web site www.kovelsonlinestore.com to see our list of many special reports and leaflets you can download. They’re filled with information for collectors: How to care for books, textiles and other collectibles, how to identify costume jewelry or woodblock prints, and much more.