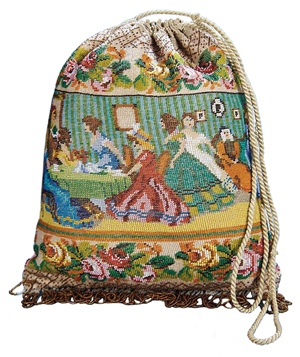 This early 19th-century beaded pouch bag pictures ladies at tea on one side and around a piano on the other. The beading, fringe and silk lining are in excellent condition. It sold recently for $1,026 at a Theriault’s auction in California.

BEACHWOOD, Ohio – Beaded purses of various shapes were in fashion for all of the 19th and 20th centuries. Shapes went in and out of fashion. Colorful and sparkling glass beads imported from Europe added to the knit and embroidered purses that were in style.

In the early 1800s, the reticule or drawstring bag was “in.” It was knitted with a bead in each stitch. And each bag had a drawstring closure and a long tassel at the bottom. By the 1840s, glass beads were used as trim on dresses and hats. The reticule was out, and rectangular beaded purses were made with geometric or pictorial designs and fancy metal frames.

Early 1900s fashions went back to the earlier beaded purses, and sometimes old frames were reused. Metal beads came into use in the 1840s and were especially popular in purses. The beaded purses of flapper days often had deco designs, metal beads, fringe and a maker’s label inside. In the 1970s and ’80s, beaded purses were back for cocktail parties but again lost favor by 2000.

Now is the time to look for antique glass beaded purses. Prices have gone up during the past 10 years, but the bags are still bargains if you want a special purse. A collector today must examine a purse carefully to determine its age and quality.

Q: I have a Featherweight Singer sewing machine that has a seal on the right side of the top that reads “Golden Gate Exposition 1939.” I also have the original attachments, black case and instruction booklet. I would like to sell it all. Do you know what the set is worth and where I can sell it?

A: Singer was founded in New York City by Isaac Merritt Singer in 1851. The company still is in business. The Featherweight, Model No. 221, was introduced at the Chicago World’s Fair in 1933 and was made until 1964. It’s smaller and lighter in weight than earlier models because parts were made out of aluminum instead of cast iron. Machines with the “Golden Gate Exposition 1939” badge were made in October 1938. Not many were sold and machines in working condition with attachments, case and manual do sell today, often to be used. The Exposition badge adds a little to the machine’s value. Most vintage sewing machines sell for a few hundred dollars.

Q: My old earthenware pot with two handles stands 6 inches high and holds about 3 1/2 quarts. The base is unglazed and the lid has reddish-brown glaze. The front of the pot is impressed “Red Wing, Provincial Ware, 29.” My oldest sister used to make baked beans in it for our family of seven. Is it worth anything?

A: The number “29” on your pot is the style number Red Wing gave to its four-quart stock pot. It’s sometimes advertised as a bean pot. The Provincial Ware bean pot came in quart and 1 1/2 quart sizes. Red Wing Pottery was in business in Red Wing, Minn., from 1878 to 1967. The company started out making stoneware jugs and canning jars and other utilitarian pottery, and later made dinnerware, vases and art pottery. Its Provincial Cooking Ware was introduced in 1941. Pieces from the line were reintroduced in 1963 and are marked on the bottom, not the side. The value of your stock pot is about $30 if it’s in good condition.

Q: I’m trying to find a value for my Dunhill lighter. It’s 14K gold with brushstrokes. Can you tell me what the lighter is worth?

A: The value of your lighter depends on the gold content and the price of gold when you sell it. The value of 24K gold is the highest because it is almost pure gold. Gold marked 14K is made of 58.33 percent gold and 41.7 percent other metals. Gold is mixed with copper, silver and zinc to make it stronger and less likely to show scratches. Prices for gold fluctuate, but you can find the current price online. An ounce of 14K gold was worth about $725 in January 2014. Gold lighters sell at auction for prices ranging from $150 to $500.

Q: I have a matchbook from the Stork Club that pictures a stork wearing a top hat and smoking a cigarette while standing on one leg. The words “Smoke Fatima” are written in the cigarette smoke. Only one match has been removed. Would this be of interest to a collector? If so, how do I contact one?

A: The Stork Club was in business in New York City from 1929 to 1965. Fatima was a popular brand of cigarettes made from a Turkish blend of tobacco. Most collectors want unused matchbooks. They usually take the matches out before storing or displaying them since they are only interested in the cover – unless the matches themselves have printing on them. Matchbook covers are sold online and at collectors’ swap meets and conventions. Most sell for just a few dollars. There is a club for matchbook cover collectors, the Rathcamp Matchcover Society, Matchcover.org.

Tip: Use a magnet to test the beads on vintage beaded bags. The best beads are steel, and steel sticks to a magnet. Do not soak a beaded bag in water to clean it. The knit threads will weaken and may break. Use a damp cloth and little pressure.

Ralph and Terry Kovel, syndicated newspaper columnists, best-selling authors, avid collectors and national authorities on antiques, hosted the HGTV series “Flea Market Finds with the Kovels.” Watch the Kovels’ HGTV shows to become an expert on almost anything you see at a flea market. DVD sets of Seasons One and Two (12 episodes each), plus a DVD of the final episodes of Seasons 1-4) are available online at Kovelsonlinestore.com for $59.90 plus $4.95 postage; by phone at 800-303-1996; or mail your check to Kovels, P.O. Box 22900, Beachwood, OH 44122. 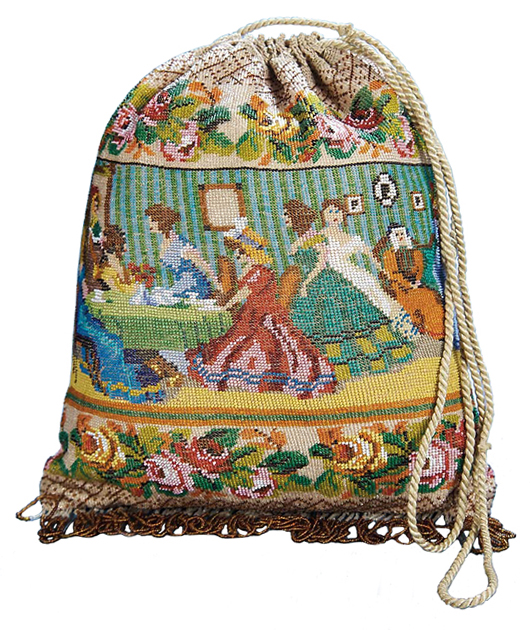 This early 19th-century beaded pouch bag pictures ladies at tea on one side and around a piano on the other. The beading, fringe and silk lining are in excellent condition. It sold recently for $1,026 at a Theriault’s auction in California.

Reading the Streets: Ben Frost and Cope 2
Scroll to top