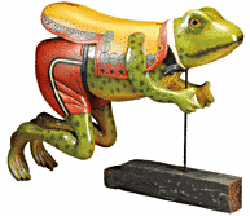 The frog from the book ‘Wind in the Willows’ probably inspired the look of this carved wooden carousel animal. It may be the only figure on an old carousel dressed in human clothes. It sold in February 2011 at a James D. Julia auction (JamesDJulia.com) in Fairfield, Maine, for $11,900.

Carousel figures, made mostly in the early 1900s, sell for high prices today. Carousels probably were first made in the 1700s to train spear-throwers, not as enjoyable rides for children. A horseback rider would ride toward a hanging ring and try to put the spear through it. By the late 1700s in Europe, there were small, light, moveable carousels that traveled from city to city. The modern carousel was introduced in the United States in the 1860s. Gustav Dentzel started a company that made carousel figures and parts. Some of the company’s carvers were trained in art; some were European immigrants who had carved tombstones and woodwork in their home countries. At least 13 U.S. companies were making carved carousel figures by 1915. American carousels were more imaginative, more elaborate and more beautiful than those made in Europe. Another famous carousel maker was Herschell Spillman Co., founded in North Tonawanda, N.Y., in 1900. The company made horses and at least 18 other animals for carousels in the “old” style. Each animal was carved with special features, flowers, saddles and masks, and was painted in bright colors. A rare frog figure made about 1910-’15 by Spillman sold recently at a James Julia auction in Fairfield, Maine, for more than $10,000. The frog was wearing shorts, vest, a white collar and bowtie, and sported a perfect coat of paint. Today, carousel figures that are not part of a working carousel are collected as folk art. Other animals were made in smaller numbers than horses and sell for higher prices. There are 100 vintage working carousels in the United States today. If there is one near where you live, take a ride, admire the hand-carved horses and bring back memories of your childhood.

Q: Was there such a thing as a dunce chair? I have read about them in books and seen some in TV movies, but was there really a chair in the corner for a dunce in school?

A: Educational ideas have changed throughout the centuries. In the 19th century and perhaps earlier, a child who misbehaved or did not study or do homework often was shamed in front of classmates. A seat in the corner and a pointed dunce cap were really used. The dunce chair could be a high stool or chair. It was made so that the child could not put his or her feet down on the floor. Perhaps that was to make the chair seem more confining. We have seen old wooden chairs with long legs as well as high stools sold as “dunce chairs.” The name and the idea seem to make buyers more interested.

Q: I inherited a metal sculpture that has been in my family since the 1930s. Counting the wooden base, it’s 26 1/4 inches high. The sculpture is of a man carrying fishing gear. It’s titled “God Fishing” and is signed “Mestais.” What can you tell me about it?

A: Mestais is a listed sculptor who worked in France around the turn of the 20th century. Not much else is known about him. Your sculpture is made of spelter, an inexpensive zinc alloy. And you’re reading the title wrong. It’s called “Cod Fishing,” not “God Fishing.” An identical sculpture sold at auction in England last year for $32. That seems less than you should expect if you sold it here.

Q: My husband has eight Bond Bread labels picturing Hopalong Cassidy that his mother saved for him. They are more than 58 years old. Each one is numbered. Can you give us any information about them?

A: Hopalong Cassidy first appeared in stories written by Clarence E. Mulford in 1904. Since then, he has been featured in novels, radio shows, movies, television and comic strips. More than 60 movies featuring actor William Boyd as Cassidy were made from 1935 to 1948. Boyd bought the rights to the Hopalong Cassidy name from Mulford in the 1940s, and later bought the rights to the movies. In 1949, the old movies, edited for television, became the first network Westerns. The Hopalong Cassidy TV show ran from June 1949 to December 1951. His radio show was broadcast from 1950 to 1952. Bond Bread was one of Hoppy’s sponsors. A series of bread labels that could be collected and pasted into an album was offered as a premium in the early 1950s. Three series of 16 labels each were made, as well as a “Hang-Up Album” for each series. Single labels sell for about $10-$12.

Q: A friend gave me an old sterlingsilver filigree pin. The interesting thing about it is that on the back, it reads “Made in Palestine.” Is that a clue to its age?

A: Since your pin is marked in English, it’s likely that it dates from the years when much of the geographic region historically referred to as Palestine was under British Mandate. That means your pin was made between 1923 and 1948 – most likely in the 1930s or ’40s. Some artists who live in today’s Palestinian territories mark their pieces the same way, but filigree work in silver was more popular 60 or 70 years ago than it is now.

Q: My old Homer Laughlin platter is marked “H32N” on the bottom. How much is it worth?

A: The Homer Laughlin China Co., still in business in Newell, W.Va., dates to 1873 but was incorporated in 1896. The “H32N” mark is a date and plant code. Your platter was made in August (designated by the “H”) 1932 at Homer Laughlin’s Plant “N.” Most early 1930s Homer Laughlin dishes sell individually for prices ranging from $1 to $50, depending on rarity and condition. The company’s most popular dinnerware, the solid-color Fiesta, sells for more.

Tip: Lusterware requires special handling because it can wear away if it is improperly washed. The ware should be washed in warm water with a mild soap or detergent. Do not rub too hard, or you will remove the luster glaze.

The best book to own if you want to buy, sell or collect. Kovels’ Antiques & Collectibles Price Guide, 2011, 43rd edition, is your most accurate source for current prices. This large-size paperback has more than 2,600 color photographs and 42,000 up-to-date prices for more than 775 categories of antiques and collectibles. You’ll also find hundreds of factory histories and marks, and a report on the record prices of the year, plus helpful sidebars and tips about buying, selling, collecting and preserving your treasures. Available online at Kovelsonlinestore.com, by phone at 800-303-1996, at your bookstore or send $27.95 plus $4.95 postage to Price Book, Box 22900, Beachwood, OH 44122.