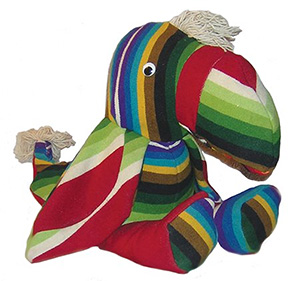 Did the auction bidder want this toy because it was made by an American Indian, or made from a collectible blanket, or just because it was a colorful toy? Whatever the reason, it sold for $115 at an Allard auction held last month in Mesa, Ariz.

BEACHWOOD, Ohio – One-of-a-kind collectibles are interesting and often not expensive. In the 1980s, a Navaho Indian decided to make a stuffed toy from a Pendleton wool blanket. Today, a vintage Pendleton wool blanket in good condition can sell for hundreds of dollars. But 30 years ago, a worn Pendleton blanket had a lower value, so it was cut up and turned into a toy. The result was a plush toucan bird that looks like the Toucan Sam logo for Froot Loops cereal. The finished bird measures 16 by 11 inches. Allard Auctions of St. Ignatius, Mont., sold it for $115 at a March 2014 auction held in Mesa, Ariz. There were 11 bids.

A: Canning jars like yours were made by Anchor Hocking of Lancaster, Ohio, to celebrate the 1976 Bicentennial of the United States. The jars often are found today and sell for $5 to $10.

Q: My husband was a cartoonist and sometimes corresponded with Charles Schulz, famous for his Peanuts comic strip. When my husband had heart surgery, Schulz sent him two of his original Peanuts strips. Each one is about 30 inches long and 6 inches high and is signed “Schulz.” My husband has since died and the strips now belong to me and our children. One strip features Charlie Brown and Snoopy, and the other Lucy and Schroeder. Please tell me what the strips are worth.

A: If the strips are indeed original works by Charles Schulz, they’re valuable. Some have sold at auction for $15,000. The first thing you want to do is make sure you are storing them safely by using archival papers and boxes. Keep them away from direct light. Insure them. If the strips are not marked with a date, try to find out when they first ran. If you want to sell, contact a reputable auction house that deals in comic art.

Q: I am thinking about selling a set of Sascha Brastoff dishes. The dishes are pink and gold and include service for eight. I think the dishes date from 1949. What is the set worth?

A: Sascha Brastoff (1918-1993), born Samuel Brostofsky, was raised in Cleveland but moved to New York City when he was 17. After serving in the armed forces during World War II, he settled in Los Angeles and worked as a costume designer for 20th Century Fox before starting his own small ceramic business in 1947. His company, Sascha Brastoff Products, opened in 1952. Brastoff’s earliest china and earthenware dinner services date from 1954, so your set is not as old as you think. His best-known pink-and-gold pattern is “Surf Ballet.” Check the mark on the bottom of your dishes; it can help determine when they were made. Brastoff’s earliest mark was his first name, hand-painted. When a new Brastoff factory opened in 1953, a stamped mark was used that includes a rooster and Brastoff’s full name. After 1963, the year Brastoff retired, the circled-R registration number was added to the mark. An early complete set of Sascha Brastoff dishes could sell for several hundred dollars.

Q: My grandmother gave us a silver bowl that she got as a gift in the 1950s or ’60s. It’s 8 1/2 inches in diameter. The bottom is marked with the lion, anchor and old English letter “G” mark used by Gorham. The sides of the bowl are engraved with three initials and the years 1854 and 1904. We’re thinking of selling it or recycling it for scrap value. Can you tell us what it’s worth?

A: The dates and monogrammed initials on your bowl indicate it probably was made to mark some event, perhaps a 50th anniversary. Silver is always worth at least its meltdown value. If a piece of silver also has sentimental value, families often keep it regardless of the meltdown value. Take the bowl to a jeweler or dealer in gold and silver to find out its minimum value. The price of silver fluctuates, and the value will depend upon the current price of silver, the weight of the bowl, and whether it’s solid silver or silver plate. You should get at least meltdown price from an antiques dealer or auction.

Q: I have a complete set of six Gorham silver-plated bronze figural bells. They date from the late 1970s and were sold as limited editions by the Hamilton Collection. The series is titled “Women Who Changed the Course of History.” The set includes Catherine the Great, Marie de Medici, Marie Antoinette, Isabella I, Elizabeth I and Mary, Queen of Scots. Please tell me the current value of the set.

A: Your bells were part of the fad of limited edition plates, figurines and bells so popular in the 1970s. Each bell sold back then for $75, and 5,000 sets were made. Today you would be lucky to get $200 for the set.

Tip: Put a piece of plastic jewelry under hot water. When the plastic gets warm, smell it. Bakelite smells like formaldehyde, celluloid smells like camphor (mothballs), and Galalith, a 1920s plastic, smells like burnt milk. Lucite does not smell.

New! Contemporary, modern and midcentury ceramics made since 1950 are among the hottest collectibles today. Our special report, “Kovels’ Buyers’ Guide to Modern Ceramics: Mid-Century to Contemporary,” identifies important pottery by American and European makers. Includes more than 65 factories and 70 studio artists, each with a mark and dates. Works by major makers, including Claude Conover, Guido Gambone, Lucie Rie, as well as potteries like Gustavsberg, Metlox and Sascha Brastoff, are shown in color photos. Find the “sleepers” at house sales and flea markets. Special Report, 8 1/2 x 5 1/2 inches, 64 pages. Available only from Kovels for $19.95 plus $4.95 postage and handling. Order by phone at 800-303-1996; online at www.Kovels.com; or mail to Kovels, Box 22900, Beachwood, OH 44122. 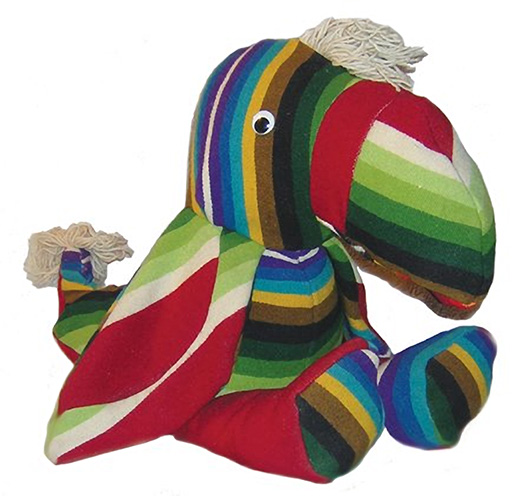 Did the auction bidder want this toy because it was made by an American Indian, or made from a collectible blanket, or just because it was a colorful toy? Whatever the reason, it sold for $115 at an Allard auction held last month in Mesa, Ariz.