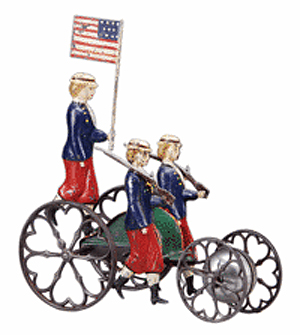 This clockwork bell toy shows a rider waving a flag while standing on a parade vehicle. It sold at a 2010 James D. Julia auction in Fairfield, Maine, for $7,475.

This is the month we celebrate a holiday that goes back to 1868, after the Civil War. Flags were put on soldiers’ graves in the North, and Gen. John A. Logan of the Union Army declared May 30 to be “Decoration Day” for the nation. Twenty-seven states celebrated it that year. Next, it became a tradition to have a Decoration Day speech and events in cemeteries. In 1866, the South celebrated its own holiday remembering Confederate soldiers, and by 1916 it was held each year on June 3, the birthday of Confederate President Jefferson Davis. Gradually the holidays merged and came to be called “Memorial Day.” Celebrations eventually honored soldiers who died in World War I and all the wars that have followed. The holiday was moved to a Monday in 1968 so a long weekend was available for family events, visits to graves of family members and soldiers, and parades, speeches and flag waving. There are other days that call for flags, including the Fourth of July, Presidents Day, Flag Day and Pearl Harbor Day.

Toymakers, even in Victorian times, realized that a flag on a toy made it attractive to a child, so many flags were included in playthings. Althof Bergmann, a German toymaker, created a bell toy in 1875 that would charm anyone. Three people are riding a wheeled parade vehicle, and one of them is holding an American flag. When the toy was wound, it ran in circles or a straight line, the bell rang and the flag waved. It is a rare antique patriotic toy that expresses the spirit of flag-waving events.

Q: I found a collection of World War II paperback books that are sexually explicit. Nothing is left to the imagination. I was told they were given to our servicemen overseas. Is there a market for something like this?

A: The books you have were probably given to servicemen to explain the dangers of sexual activity in war zones. Erotica of all sorts sells, but there are laws or antique-show rules about how it is displayed, so it is rarely seen at shows or shops. Ask a local antiquarian bookseller how to sell this type of book in your area. If no one can help, try going online to antiquarian booksellers, shops or auctions that sell war memorabilia. It is part of our history and will be wanted by researchers. Many rare and artistic pieces of erotica, like early Japanese scrolls and prints that instruct new brides, are in museums and libraries today. And some things considered improper in the past are offered for sale today and do not offend anyone.

Q: I have a silk scarf my grandpa bought for my grandma while he was serving in the U.S. Navy at Gibraltar during World War I. It is decorated with a group of flags, including those of Britain, France and the United States, and the words “Gibraltar Present” embroidered above them. I would like to know how much it is worth and how to store it.

A: The greatest harm to a fabric can come from strong sunlight and dirt. Keep the scarf out of direct sunlight. To store it, wrap it in unbleached muslin or acid-free paper. Do not wrap it in old newspaper, which may leave permanent stains. Don’t store it in or on cardboard or unsealed wood. If the fabric is decorated with metal threads, it should not be washed. If it is dirty, it should be dry-cleaned. If you want to display the scarf, it can be mounted on acid-free backing or unbleached muslin and framed under glass. To remove wrinkles, iron on the wrong side with a warm iron. Value: about $50.

Q: I am in possession of an ancestor’s U.S. Navy honorable discharge papers dated Feb. 15, 1865. The papers are preserved in a sealed frame and have been displayed on a wall away from sunlight. The document is readable and is signed by my relative’s commanding officer and paymaster. Does this have value?

A: If Abraham Lincoln signed your ancestor’s discharge papers, they would have considerable value. Without Lincoln’s signature or that of a well-known commanding officer, the papers might sell to a collector for under $100. If you want to sell, you may want to ask your relatives if one of them would like to buy the papers – but, of course, that can lead to family squabbles. Your ancestor’s discharge date was about two months before the war ended, so there’s a story behind that. You can do a lot of research online about your ancestry and U.S. Naval history. You might learn something that will make you want to keep the papers.

Q: I have a Pearl Harbor pin that my uncle gave my grandma when he returned from serving in the Pacific during World War II. It is simply the written words “Remember Pearl Harbor” with a pearl attached. I was wondering what the value is.

A: Many different pins were made commemorating the bombing of Pearl Harbor on Dec. 7, 1941. “Remember Pearl Harbor” was a popular slogan. Some pins, like yours, include a fake pearl. Others say “Remember” above a large set pearl, then say “Harbor” below the pearl. The rebus is often puzzling to those who are under 50 years old. Collectors call jewelry like this – brought back by soldiers, sailors and marines for their wives, mothers or girlfriends – “sweetheart jewelry.” Pins usually sell for $40 to $50.

Keep up with changes in the collectibles world. Send for a FREE sample issue of our 12-page, full-color newsletter, Kovels on Antiques and Collectibles, filled with prices, news, information and photos, plus major news about the world of collecting. To subscribe at a bargain $27 for 12 issues, write Kovels, P.O. Box 8534, Big Sandy, TX 75755; call 800-829-9158; or subscribe online at Kovelsonlinestore.com.