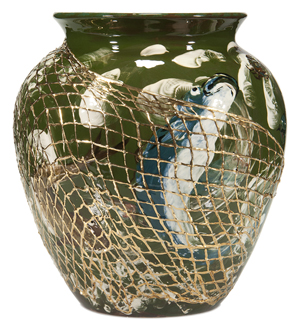 Look at the bottom of a vase to identify it. This vase has marks indicating it is a piece of Rookwood pottery made in 1883 by a talented decorator. It auctioned for $5,290 at Humler & Nolan of Cincinnati. Unmarked it would have sold for much less.

BEACHWOOD, Ohio – Rookwood pottery, made in Cincinnati since 1880, is perhaps the most popular American art pottery among collectors. The company not only made artist-decorated vases, molded bookends, art-deco figurines and commercial wares, but it also used marks that tell a collector exactly what it is. Until 1886 the mark was the year in numerals and the name Rookwood. In 1886 a new mark was chosen – a backward capital letter “R” leaning against a capital letter “P.” A flame was added to a circle around the top of the mark each year until 1900. After that, a Roman numeral for the last two digits of the year was put under the mark. So 1904 was a flame mark with IV at the bottom. The company went out of business in 1967, but was later bought and sold several times.

In 2011 the business was bought by Martin and Marilyn Wade, Cincinnati real estate developers. Today Rookwood uses a new mark – the flame mark with the year in Roman numerals. So 2014 would be marked MMXIV. Other letter marks represent the color and type of clay, numbers 1 to 7301 tell the shape, and initials tell the name of the artist. All of these codes can be found in books or websites about Rookwood. It helps to know this history, but a collector should judge a piece of Rookwood by the quality of the glaze and the skill of the decorator, and then add extra value for condition, size, age, the fame of the decorator, and how much you like the piece.

Humler & Nolan, an auction gallery in Cincinnati, sold a 14-inch-high vase with early Limoges-style decoration that was probably made by the founder of the pottery, Maria Longworth Nichols. It’s marked “Rookwood 1883.” Although it was chipped and restored, the quality of the decoration, large size and artist attribution attracted a bid of $5,290.

Q: My old porcelain figurine is a bathing beauty posed on her tummy under a turtle’s shell. The woman’s backside is exposed. My aunt gave me the figure years ago and I think she owned it since the 1920s. What can you tell me about it?

A: Your bathing beauty figurine, sometimes called a “naughty novelty,” is a form familiar to collectors. Posed porcelain figures of partially clad women on or under turtle’s shells have been around since the early 1900s. Figures made in Germany before World War I are well made and sell today for $100 to $400. Similar novelties made in Japan before or after World War II sell for less.

Q: I have a Polyphon music box from Germany that plays music from perforated metal discs. There are nine discs with song titles from the 1880s and ’90s. I’m downsizing and would like to sell it. How much is it worth?

A: Disc music boxes were invented in 1870. Polyphon Musikwerke was founded in Leipzig, Germany, before 1890. Most Polyphone disc music boxes were made between 1895 and 1905. The company also made musical clocks and other items with musical mechanisms. Music boxes are measured by the size of the disc, not the height of the cabinet. Polyphon music boxes sell at auctions for hundreds or even thousands of dollars, depending on size, rarity and condition. A Polyphon Excelsion tabletop single-comb music box and nine discs sold for $1,150 earlier this year.

Q: I’m trying to find a current value for an unopened 1974 Lionstone Lonely Luke figural decanter. The figure is an old cowboy sitting on a stump with a bottle in his hand and cup on the stump. The decanter is 10 1/2 inches tall and is still filled with whiskey. All the original labels still are on and very readable. What is it worth?

A: Limited-edition figural liquor decanters were very popular in the 1970s but don’t sell well today. Prices have gone down. Lonely Luke decanters were part of Lionstone’s Old West series of decanters. They held whiskey, port or liqueur. Collectors like the miniature version, 4 3/8 inches tall, issued in 1975. It sells for about $5 today.

Q: I have a breakfast set of four place settings of Franciscan Strawberry Fair dishes. I would like to sell the set.

Q: My parents gave me their antique bedroom set. It includes a nightstand, twin beds, a dresser with a mirror and a chest of drawers. Each piece is stamped “West End Furniture Company, Rockford, Illinois.” I was told the wood is golden oak. Can you give me information on the company?

A: West End Furniture Co. was in business in Rockford from 1890 to 1941. The company made bedroom furniture, bookcases, buffets, desks, folding beds, tables and other furniture and offered lines of “medium” and “fine grade” furniture. Many Swedish furniture makers settled in Rockford, and at one time it was the second largest center of furniture manufacturing in the world.

Tip: When freezing old clothes to kill any insects, check the buttons first. Pewter, painted glass or ceramic buttons may be damaged by the cold.

Contemporary, modern and mid-century ceramics made since 1950 are among the hottest collectibles today. Our special report, “Kovels’ Buyers’ Guide to Modern Ceramics: Mid-Century to Contemporary” identifies important pottery by American and European makers. Includes more than 65 factories and 70 studio artists, each with a mark and dates. Works by major makers, including Claude Conover, Guido Gambone, Lucie Rie, as well as potteries like Gustavsberg, Metlox and Sascha Brastoff, are shown in color photos. Find the “sleepers” at house sales and flea markets. Special Report, 8 1/2 x 5 1/2 inches, 64 pp. Available only from Kovels for $19.95 plus $4.95 postage and handling. Order by phone at 800-303-1996, online at Kovels.com; or write to Kovels, Box 22900, Beachwood, OH 44122. 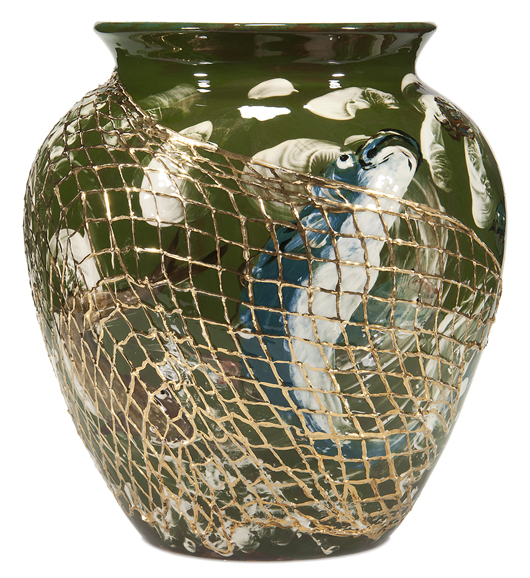 Look at the bottom of a vase to identify it. This vase has marks indicating it is a piece of Rookwood pottery made in 1883 by a talented decorator. It auctioned for $5,290 at Humler & Nolan of Cincinnati. Unmarked it would have sold for much less.