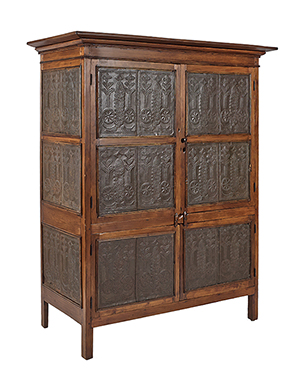 But by later Colonial times, pies were popular for a main course when filled with meat and for dessert when made with fruit. There were no refrigerators, not even ice boxes, but a cooked pie could be safely stored for about a week if kept away from bugs and mice. A “pie safe” was used for food storage by the 19th century, especially in the Midwest. A wooden cupboard on four tall thin legs was made with shelves and drawers. But the sides and the cupboard doors had panels made of pierced tin. The sharp edges of the holes kept out most creatures and the holes let in air so the cooked fruit did not create mold. The cabinet was kept on a porch on the cool, shaded side of the house.

Collectors today like handmade informal kitchen furniture. The best pie safes had tin panels with the holes placed in attractive patterns. Sometimes the tin or the wood was painted. Some experts today say a pie can stay on a shelf for two or three days and still be OK to eat. Refrigerating a fruit pie lowers the quality the pie.

Q: My mother has some Royal Doulton figurines of women dressed in elaborate ruffled hoop skirts, bonnets and shawls. But one figurine seems a bit risque for Royal Doulton. She is wearing a tight, revealing dress while sprawled on a couch. Could it be a fake?

A: The Royal Doulton figurines made by Doulton and Co. after 1902 were made to sell in gift shops. Most of the figurines were sentimental, lovable, beautiful ladies from a more romantic century. But one of Doulton’s designers, Leslie Harradine, made small anthropomorphic animals and other figures that were unusual. He designed several figurines of women lounging on couches in provocative poses. One called “Dreamland,” made in the 1930s, was in the Art Deco style. Another, “Siesta,” made between 1928 and 1938, featured a shapely blond in a flimsy dress leaning on a sofa covered with a pink shawl. Both of these figurines are rare and expensive today. Siesta sold in 2013 for $1,560. Dreamland was listed a few years ago for $7,000, but is worth a little less today. The fame of the artist is the reason the figurines sell for high prices.

Q: A gumball machine was left in a commercial building we bought back in 1968. There is a one-cent decal on the glass top. A metal label on the silver lip where the gum comes out reads, “Parkway Machine Corp., 715 Ensor St., Baltimore 2. Md.” Can you give me any information about the machine?

A: Parkway Machine was founded in 1938 by Irv Kovens. He was a Baltimore cab driver who repaired and sold stamp machines on the side. Parkway Machine initially repaired vending machines. The company began selling vending machines and supplies in 1941. Your gumball machine was made between 1943, when one- or two-digit postal zone numbers were first used, and 1963, when five-digit ZIP codes were introduced. In 1999 the company’s name became A&A Global Industries. It’s still in business, run by members of the Kovens family, but is now based in Cockeysville, Md.

Q: I have a grayish foot warmer about 11 1/2 inches long. The words in blue on the top are “Henderson Foot Warmer.” The bottom is marked “Dorchester Pottery Wks., Boston, Mass.” There is a brass screw filler with a chain attached to the neck. On the filler it says “Pat. Nov. 15, 1912.” What would this foot warmer be worth today?

Q: Can you please give me information about my Ivanhoe three-burner stove with an extra side burner?

A: Ivanhoe kerosene stoves were made by the Perfection Stove Co. of Cleveland. The earliest Ivanhoe stoves, probably introduced around 1930, had a single burner. Ivanhoes with two or three burners plus a side burner were made later. Once electricity and gas were installed in houses across the country, the market for kerosene stoves and ovens dried up. Stoves like yours sell for $100 to $300, depending on condition.

Tip: When cleaning a chandelier, do not spin it around. This could damage the wiring or the chain holding it. Instead of moving the fixture, move your ladder around it.

Terry Kovel and Kim Kovel answer questions sent to the column. By sending a letter with a question, you give full permission for use in the column or any other Kovel forum. Names, addresses or email addresses will not be published. We cannot guarantee the return of photographs, but if a stamped envelope is included, we will try. The amount of mail makes personal answers or appraisals impossible. Write to Kovels, (Name of this newspaper), King Features Syndicate, 300 W. 57th St., New York, NY 10019.

Order the special reports set: “Buyers’ Guide to 20th Century Costume Jewelry,” Part One and Part Two. Only $34.95. These reports identify the most popular makers and designers of costume jewelry – European and North American costume jewelry, Mexican silver jewelry and mid-century jewelry. Recognize Hobe and Sigi jewelry and rare pieces of Bakelite. For the serious collector and the beginner. Available only from Kovels for $34.95 plus $4.95 postage and handling. Order by phone at 800-303-1996; online at Kovels.com; or mail to Kovels, P.O. Box 22900, Beachwood, OH 44122. 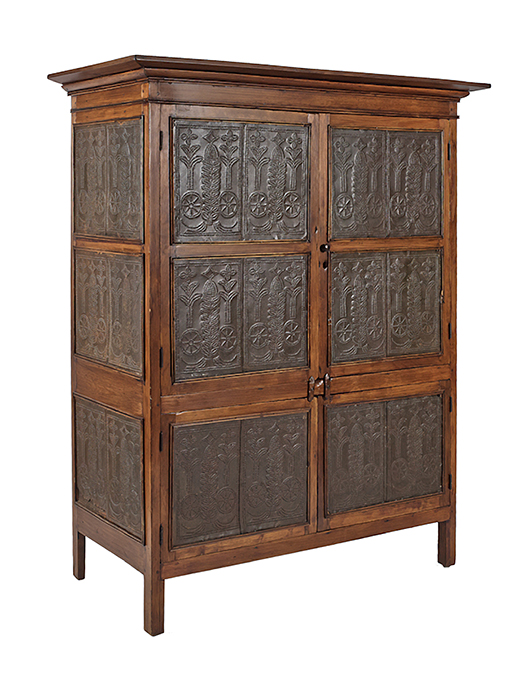