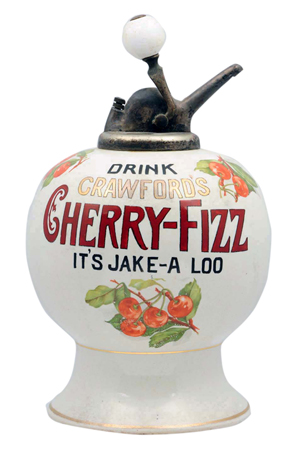 Cherry-Fizz was a drink made from soda water and cherry-flavored syrup. Although the first soda fountains opened in the United States in the early 1800s, they were most popular in the 1940s and 1950s. This Cherry-Fizz dispenser sold for $19,200 at a 2014 Morphy auction held in Denver, Pa.

BEACHWOOD, Ohio – Ice-cream scoops, soda fountain syrup dispensers and urns, advertisements, even old soda glasses and sundae dishes are selling quickly. Nostalgia has kept the prices high for things that bring back memories of the old-fashioned drugstore soda fountain. A white ceramic Crawford’s Cherry-Fizz syrup dispenser with gold, orange, green and red lettering and nine cherries as decorations auctioned for $19,200 at Morphy Auction’s August 2014 sale in Denver, Pa. It was just one of the 130 syrup dispensers in the auction. Seventy percent of them sold for more than $1,000. Prices were high because the syrup dispensers were in good to great condition and had their pumps and all other parts. A record price for a dispenser was set at the same auction: $69,000 for a Pepsi-Cola syrup urn in excellent condition that we think resembles pieces of 1904 Roseville pottery by Frederick Hurten Rhead.

Q: Years ago, I bought an old wooden dictionary stand. It’s about 3 feet tall, has angled sides and two lower shelves. There’s a small metal plate on the bottom shelf that reads “Baker Office Furniture Co., Pittsburg, Pa.” There is no “h” in Pittsburg. Can you tell me something about it so I can pass it on to younger family members? Does it have any value?

A: Your dictionary stand was made between 1891 and 1911. Pennsylvania’s city of Pittsburg was chartered in 1816 and the spelling of the name changed a few times. In 1891, the United States Board on Geographic Names ruled that the official spelling was without an “h.” The decision was reversed in 1911. Edward Enzer Baker opened the first office furniture store in the country in 1889. In 1913 Baker Office Furniture Co. advertised a reorganization sale, offering old office furniture for sale and offering to buy used office furniture – or taking it as partial payment for new furniture. The company was still in business in the 1920s. The value of your dictionary stand: $95 to $250.

Q: I have a cast-iron Dutch oven and lid. It’s embossed “Griswold No. 8 Tite-Top Dutch Oven” around the lid and “Erie Pa., U.S.A.” on the bottom. Value?

A: Griswold’s history dates back to 1865. But the company was not named Griswold Manufacturing Co. until about 1884. It operated in Erie until 1957. Griswold made a few different “Tite-Top” Dutch ovens marked “No. 8.” Yours could date from before or after World War II, depending on its size and style. Most of them sell for $150 to $200. Griswold cast-iron cookware is popular with both collectors and cooks.

Q: I have a lamp with a pillow base that has a cast-bronze cat sitting on it. The cat’s tail forms the lamp’s stem. On the pillow is a medallion that has a fleur-de-lis inside a square and the words “Collection Francaise, Made in U.S.A.” I bought the lamp at an auction. A man has now offered me double what I paid. Should I sell?

A: Your lamp isn’t bronze. It’s made of spelter, a zinc alloy less valuable than bronze. It’s also called “French Bronze.” In 1907 J.B. Hirsch, a Romanian metal-smith, started the New York Metal Art Bronze Works in Manhattan to import pieces from French foundries. After World War I, he traveled to Paris, bought the company’s molds and opened J.B. Hirsch, his own casting foundry, in the United States. During the 1930s, J.B. Hirsch made figural “French Bronze” lamps. From 1948 to 1963, Hirsch and his son Abraham reassembled hundreds of original bronze molds hidden during World War II. J.B. Hirsch is still in business in New Jersey as a division of Richmond Lighting. Your lamp probably was made in the 1960s or 1970s and is worth about $200. Now you can decide whether to sell the lamp.

Q: I bought six silver spoons at a garage sale a couple of years ago. They are 5 1/2 inches long and have a dragon on the front. They are marked on the back with “DK” in a diamond and “E.P.” I tried to find information on these but had no luck. Can you tell me how old they are and how much they’re worth?

A: The letters “E.P.” stand for electroplate, a method of coating metal with a layer of silver that uses electric current. The mark “DK” may be for D.K. & Co., a company in Japan. Dragons are popular Japanese decorations. We found a pair of silver seafood forks marked “DK” decorated with pagodas for sale online for $30. Your spoons probably were made after 1930. Value of your set of six spoons: about $75.

Q: I discovered some old wooden tennis rackets while going through some old things. They’re from the 1970s and are in good condition with no broken strings. Are they are collectible?

A: Almost anything associated with tennis is collected, including vintage rackets, metal cans that held balls, covers, presses, programs, etc. Early tennis rackets were made of layers of wood glued together and strung with gut. Metal rackets became popular in the late 1960s. Some collectors look for rackets made before 1920, some for racquets from a certain maker or endorsed by a professional player, and some for endorsed racquets that include a photo decal of the player. Wooden racquets should be kept in a wooden press or frame to prevent warping. You can find old rackets at garage sales and house sales, thrift stores, online, or at auctions. They sell for prices from a few dollars to a few hundred dollars, depending on desirability, rarity and condition.

Tip: The acid or sulfur in eggs, onions, mayonnaise, tart salad dressing and salt will corrode the surface of silver or silver plate.

New! Kovels’ Antiques & Collectibles Price Guide, 2015, 47th edition, is your most accurate source for current prices. It’s available now and includes a special bonus section that helps you determine prices if you’re downsizing and selling your collectibles and antiques. If you order directly from the Kovels, you’ll receive our FREE Companion eBook with ALL of the book’s 35,000 prices-ready for downloading to your eReader. “Kovels” is the best book to own if you buy, sell or collect. The large-size paperback has more than 2,500 color photographs and 700 categories of antiques and collectibles. You’ll also find hundreds of factory histories and marks, a report on record prices, and helpful sidebars and tips about buying, selling, collecting and preserving your treasures. Available for $27.95 plus $4.95 postage. Purchase directly from the Kovels if you want the eBook Companion. Visit KovelsOnlineStore.com, call 800-303-1996, or write to Price Book, P.O. Box 22900, Beachwood, OH 44122. 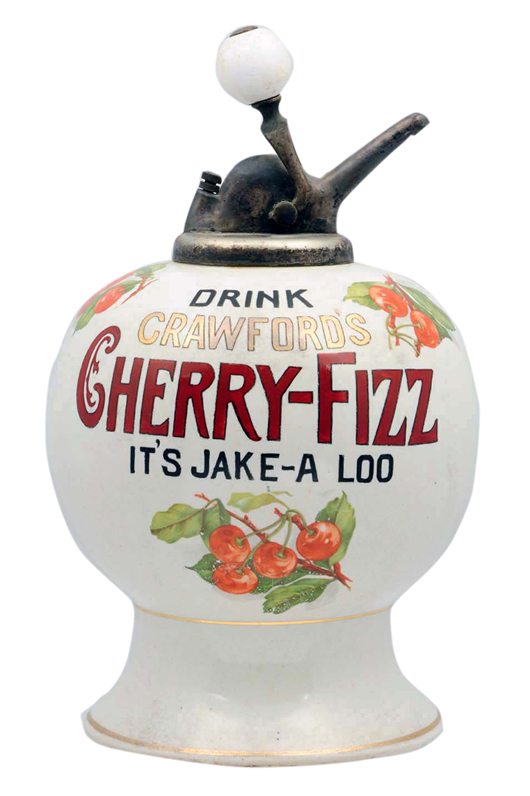 Cherry-Fizz was a drink made from soda water and cherry-flavored syrup. Although the first soda fountains opened in the United States in the early 1800s, they were most popular in the 1940s and 1950s. This Cherry-Fizz dispenser sold for $19,200 at a 2014 Morphy auction held in Denver, Pa.