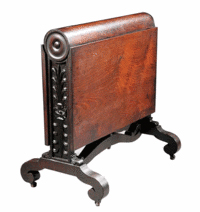 This is an American Sunderland table made about 1840. It can be kept against a wall until needed. The sides lift up to form a full-size table. Neal Auction Co., New Orleans, sold it recently for $922.

The problem of making a table that takes up a small space but provides a large tabletop has been solved in many ways. In the 18th century, especially in the South, where homes were made with large, long front halls, the solution was several matching tables. Two tables with drop leaves were kept against the wall on either side of the hall or near each other on the same wall. A center table that became larger with a flip-top or leaves was also used in the hall or perhaps in a nearby parlor. When there was a party, the three tables were moved together to form one large table that could seat 12 to 18 people. A center table was needed in the days before electric lamps because the only light in the room often came from a single lamp on the table. If the room was small, the table could be made with large drop leaves on each side. To enlarge the table for family time or a card game, the leaves were extended and held in place by moveable legs or hidden supports. The small-table problem was also solved with a nest of three or four tables, each a little smaller than the next, so they fit in the space of one table. Late 19th- and 20th-century designers created tables with removable boards or boards that could be pulled out on a track under the tabletop. Modern tables are made using all of these ideas.

Q: I have a Sleepy Eye Milling Co. Cookbook shaped like a loaf of bread. It has no date and is in excellent condition. What is it worth?

A: The Sleepy Eye Milling Co. was a flour mill that operated in Sleepy Eye, Minn., from 1883 to 1921. Old Sleepy Eye was a Sioux Indian chief who was born in Minnesota in 1870. His name was used for the town as well as the mill. The company promoted its flour with many advertising items, including cookbooks, calendars, paperweights, thermometers, thimbles, trade cards, postcards, fans, dough scrapers and many pieces of pottery, all of which are popular with collectors. Depending on condition, your cookbook would sell for between $100 and $200. The Old Sleepy Eye Collectors Club, www.OldSleepyEyeCollectors.com, publishes a quarterly newsletter with classified ads.

Q: I have a copper or brass ice bucket from the RMS Carpathia. It has an added metal plate that says “Please do not remove from first-class passenger cabin.” Could this be a replica or is it the real thing? I found it in a shed on our property after my father died.

A: The RMS Carpathia was a transatlantic passenger ship that was part of the Cunard Line from 1903 to 1918. The Carpathia rescued survivors of the sinking of the Titanic when it hit an iceberg in 1912. The ship also carried supplies from Britain and troops from Canada during World War I. It was sunk by torpedoes from a German U-boat on July 17, 1918, off the coast of Ireland. There are many replicas of Carpathia ice buckets because so many people want Titanic-related memorabilia.

Q: I have a small plain brown pottery bowl signed “M. Jalanivich, Biloxi.” I know that he worked with George Ohr, the “Mad Potter of Biloxi,” around 1910. Does this piece have any value?

A: Manuel Jalanivich was born in Biloxi, Miss., in 1897. He studied pottery with George Ohr in 1910-12 and operated his own small pottery in Biloxi in 1915. Jalanivich studied at Niloak Pottery and at Durant Kilns before enlisting in the Navy in 1919. He moved to San Francisco in 1922 and worked with Ingvardt Olsen. Jalanivich made wheel-thrown pottery and Olsen glazed it. Some of it is marked “Jalan.” Jalanivich taught at the California School of Fine Arts from 1937 to 1939. He and Olsen taught pottery and art to wounded veterans at the hospital in San Francisco’s Presidio during World War II. Jalanivich died in 1944. A collector of Jalan pottery might pay $100 for your bowl at a pottery auction.

Q: I have a set of china marked “PT Tulowice, Made in Poland.” It has the same wreath mark with the star as RS Prussia, RS Germany, RS Suhl, RS Tillowitz and RS Poland pottery. I would like to know the history.

A: RS are the initials of Reinhold Schlegelmilch, who operated potteries in Tillowitz and Suhl, Germany, beginning in 1869. His mark was “RS” in a wreath with the name of the city, province or country underneath the wreath. Pieces marked RS Germany, RS Poland, RS Prussia, RS Silesia, RS Suhl or RS Tillowitz were all made by Schlegelmilch or his sons. After World War II, Tillowitz became part of Poland and the name of the city was changed to Tulowice. Pieces marked “PT Tulowice” were made at the Reinhold Schlegelmilch factory after 1945 and before 1956.

Tip: To be safe, hang a large picture on two hooks, not just one.

Need more information about collectibles? Find it at Kovels.com, our Web site for collectors. Check prices there, too. More than 700,000 are listed, and viewing them is free. You can also sign up to read our weekly Kovels Komments. It includes the latest news, tips and questions and is delivered by e-mail, free, if you register. Kovels.com offers extra collector’s information and lists of publications, clubs, appraisers, auction houses, people who sell parts or repair antiques and much more. You can subscribe to Kovels on Antiques and Collectibles, our monthly newsletter filled with prices, facts and color photos. Kovels.com adds to the information in our newspaper column and helps you find useful sources needed by collectors.