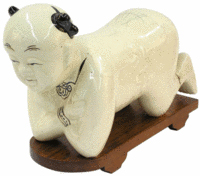 This 15-inch-long porcelain child figure is in the style of a 19th-century Chinese pillow. It was made in northern China. It had been repaired so it sold for only $108 at Clars Auction Gallery in Oakland, Calif.

Homemade pillows were used in ancient Egypt, medieval Europe and early America. In the mid 19th century, the Industrial Revolution and the evolving textile industry changed the way pillows were produced. From homemade and hand-embroidered, they became machine-made. Bed pillows were stuffed with goose down or feathers. But in China, pillows were very different. At first they were smooth stones. Later, by the late sixth century, they were rectangular blocks made of wood, jade, bronze, porcelain or other ceramics. Most had a curved top surface for the head. Porcelain pillows were made from the 10th to the 14th century, then were gradually replaced by pillows of other materials or even European-style stuffed pillows. Porcelain and other hard pillows were decorated with animals, plants, people, mountains and even geometric designs. Some had colorful glazes. Many were shaped like animals or small children. Many collectors today do not realize that the decorated rectangles were pillows or headrests. They are sometimes called “opium pillows” because opium users liked to lie on their sides using hard pillows. They claimed that after smoking opium for a while, even a hard pillow felt “like a cloud.” Today collectors find few of the very old hard pillows, but 19th- and 20th-century replicas are available. The pillow shaped like a child is so popular as a decorative item that it is still being made.

Q: I own an old carved oak side chair made by the Jamestown Lounge Co. that’s marked “No. 9313.” It’s from a line called Feudal Oak. What can you tell me about the company and the chair’s value?

A: The Jamestown Lounge Co. of Jamestown, N.Y., was founded by four partners in 1888. At first it manufactured, appropriately, only lounges – long armless, backless, upholstered pieces with a hard roll at one end. In the 1890s, the company added box couches and convertible sofa beds, and by the 1900s it was making all kinds of case and upholstered furniture. The Feudal Oak line was introduced in the 1930s and was produced for decades. Pieces were carved in a medieval style and were highly waxed. Your No. 9313 chair is pictured in the company’s 1938 and 1941 catalogs, but it was gone by the time the 1949 catalog came out. Jamestown Lounge Co. was sold in 1978, filed for Chapter 11 bankruptcy protection in 1982 and closed in 1983. Your chair, if in excellent condition, would sell for about $100.

Q: My 11-inch china vase is decorated with pink flowers and green leaves. There are a couple of different marks on the bottom. The largest is an “X” with a crown at the top, an “R.” on the left, a “C.” on the right and the word “Bavaria” on the bottom. There’s another mark that looks like “P.CIRCAChina Co. of Seattle” surrounding the words “hand painted.” What does the “R.C.” in the mark stand for, how old is my vase and what is it worth?

A: The “R.C.” stands for “Rosenthal China,” a pottery and porcelain manufacturer that has been in business in Selb, Germany, since 1879. Rosenthal used the mark you describe from 1891 to 1907. The word “Bavaria” is in the mark because Rosenthal shipped “blanks” (undecorated wares) to U.S. companies (such as P.CIRCAChina Co.) so artists working at those firms or even at home could decorate vases and dishes and sell them to American consumers. Vases like yours sell today for about $200.

Q: I have two Coca-Cola trays, “Menu Girl” and “Girl with Umbrella.” The writing on them is all in French. I can’t find any information about the trays. Can you help?

A: Your trays were probably made for the French-Canadian market in Quebecirca”Menu Girl” was issued in 1950 and is worth about $25 today. “Girl with Umbrella,” issued in 1957, sells for about $125.

Q: I have a mirror marked “Copyright Syroco Inc., Made in U.S.A.” It is 30 inches long and 20 inches across at the widest part. There is a crest on the top and bottom and carved flowers around the rest of the frame. I would like to find out something about the manufacturer.

A: In 1890 Adolph Holstein, founder of the Syracuse Ornamental Co. in Baldwinsville, N.Y., developed a technique of molding wood composition so that it resembled carved wood. A mixture of wood flour, wax and resin was poured into molds and compressed, creating the product known as “Syroco.” The company made various decorative items, including mirrors and clocks. Later, it manufactured molded patio furniture. In the 1930s, the company name was changed to Syroco IncircaOther companies were also making items out of molded wood composition by the 1940s. These are sometimes referred to as “syrocco,” with an extra letter “c,” to distinguish them from Syroco made by Syracuse Ornamental Co./Syroco IncircaThe company became a subsidiary of Industrias Vassallo Inc., in 2004 and went out of business in 2007. The company name on your mirror indicates it was made after 1930. Syroco is still inexpensive. Mirrors sell for as little as $25.

Tip: Never pick a chair up by the arms. Pick it up under the seat. The arms could loosen or crack.


Need more information about collectibles? Find it at Kovels.com, our Web site for collectors. Check prices there, too. More than 700,000 are listed, and viewing them is free. You can also sign up to read our weekly Kovels Komments. It includes the latest news, tips and questions and is delivered by e-mail, free, if you register. Kovels.com offers extra collector’s information and lists of publications, clubs, appraisers, auction houses, people who sell parts or repair antiques and much more. You can also subscribe to Kovels on Antiques and Collectibles, our monthly newsletter filled with prices, facts and color photos. Kovels.com adds to the information in our newspaper column and helps you find useful sources needed by collectors.