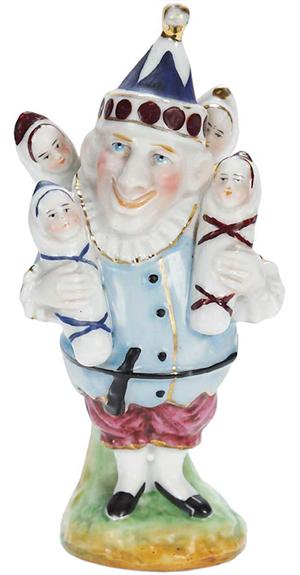 This smiling porcelain figure represents a ‘Kinder Bringen,’ a German folklore figure who brings children to brides. This jester and his children sold for $969 at a Theriault’s auction in Annapolis, Md.

Babies don’t always arrive as soon as they are wanted. Today a woman might consider getting medical help to conceive, but since ancient times the fertility symbol was thought to be an aid.

Frogs, rabbits, entwined snakes and even shoe figures were at one time given to the want-to-be mother. Some ancient peoples took small pottery figures of pregnant women to a religious service as an offering. American Indians put pictures on textiles and pottery of an old, bent man playing a flute or carrying a cane who brought babies to a household. Perhaps most interesting to collectors is the German “Kinder Bringen.” He or she was a figure, often a jester, who carried armloads of babies dressed for baptism. The babies were covered in tight cloth wraps much like swaddling clothes but called “taufling.” All of these German words are used today, even by English-speaking collectors, to describe the dolls or figurines given to a new bride as a wish for children.

A few of these figures have sold at recent doll auctions. At a 2012 auction, a 19th-century 5-inch porcelain figure of a smiling jester holding four wrapped babies sold for almost $1,000.

Q: I have six oval-back dining room chairs made by the Aimone Manufacturing Co. of New York. Please tell me something about the company.

A: Aimone Manufacturing Co. was in business in New York City from the late 1870s until at least 1919 and perhaps until the Depression hit. It started as an importer of English, French and Italian furniture and decorative arts, but later concentrated on manufacturing its own furniture at factories on East 22nd and East 23rd streets. Under the name Aimone Furniture Co., it operated wholesale showrooms in Jersey City, N.J., and on East 32nd Street in New York City.

Q: My husband and I have an old bottle and I was wondering what it’s worth. A picture of the White House is embossed on the bottle. It says “White House Brand” above the picture and “Vinegar” below it. On the bottom of the bottle, it reads “Bottle patented March 6, 1909.” The bottle has a pouring spout and a little handle. It’s in good condition. Is it valuable?

A: White House vinegar has been made for more than 100 years. In 1908 Frank Armstrong and B. Fleet Board bought a cider vinegar business in Alexandria, Va., and renamed the business Board, Armstrong and Co. In 1913, after Board died, Armstrong organized National Fruit Product Co. White House Foods is part of that company. National Fruit Product Co. is still in business and makes apple juice, applesauce, specialty apple products and vinegar. White House vinegar is still available, but it’s sold in modern bottles with paper labels. In earlier years, it was sold in bottles, jugs, jars, cruets and pitchers in several different sizes, shapes and colors and with different embossed designs or lettering. Bottles shaped like an apple, lighthouse or the Unisphere at the 1964 New York World’s Fair were made. Some were embossed with ballerinas and cabbage roses. Bottles or jugs embossed with the White House design like yours were made in the 1920s and usually sell for $10 to $50.

Q: I have a purse from the early 1950s, when just about everything was plastic. This purse has a hard, flat plastic top that opens to the oval pierced-metal body. The handle attached to the top is plastic, too, and the top is latched to the bottom with an attractive metal hook. You could put a colorful scarf inside the clear purse to match your outfit and hide the purse’s contents. I can’t find a maker’s name on it, but I’m wondering what my purse would sell for.

A: Plastic purses from the 1950s are very collectible. Some women not only display the purses, but also use them. We couldn’t find any old ads that showed clear plastic purses with a colored scarf inside, but we have friends who remember using a scarf that way. Even if you don’t know who made your purse, if it’s in good condition it could sell for $250 or more.

Q: I own a small wringer-style clothes washer that I think is a salesman’s sample. It’s 7 inches wide, 8 inches tall and about 4 inches deep. It has a 10-inch-long metal handle with a wooden grip. The words “American Wringer Co., N.Y.” are stamped on the wood. It’s also marked with a horseshoe and the initials “AWC.” I bought it in a thrift store for $20. Can you tell me if it’s a salesman’s sample and what it might be worth?

A: The first mechanical clothes wringer was invented by Selden A. Bailey in 1859. Bailey began producing Wringers in 1860 and founded the Bailey Wringer Co. in Woonsocket, R.I., a short time later. The company became the American Wringer Co. in 1899. It remained in business until the 1950s. Your wringer probably is not a salesman’s sample. It may have been made to launder lingerie or other small items. Small wringers like yours sell for about $100 to $200.

Tip: Natural, unpainted wicker is more valuable than painted wicker, so do not paint a natural piece. It will lower the value.

Sign up for our weekly email, “Kovels Komments.” It includes the latest news, tips and questions and is free, if you register on our website. Kovels.com has lists of publications, clubs, appraisers, auction houses, people who sell parts or repair antiques and more. Kovels.com adds to the information in this column and helps you find useful sources needed by collectors.


Terry Kovel answers as many questions as possible through the column. By sending a letter with a question, you give full permission for use in the column or any other Kovel forum. Names, addresses or email addresses will not be published. We cannot guarantee the return of any photograph, but if a stamped envelope is included, we will try. The volume of mail makes personal answers or appraisals impossible. Write to Kovels, Aucton Central News, King Features Syndicate, 300 W. 57th St., New York, NY 10019.

Contemporary, modern and mid-century ceramics made since 1950 are among the hottest collectibles today. Our special report, “Kovels’ Buyers’ Guide to Modern Ceramics: Mid-Century to Contemporary,” identifies important pottery by American and European makers. Includes more than 65 factories and 70 studio artists, each with a mark and dates. Works by major makers including Claude Conover, Guido Gambone, Lucie Rie, as well as potteries like Gustavsberg, Metlox and Sascha Brastoff, are shown in color photos. Find the “sleepers” at house sales and flea markets. Special Report, 2010, 8 1/2 x 5 1/2 inches, 64 pp. Available only from Kovels. Order by phone at 800-303-1996, online at Kovels.com, or send $19.95 plus $4.95 postage and handling to Kovels, Box 22900, Beachwood, OH 44122. 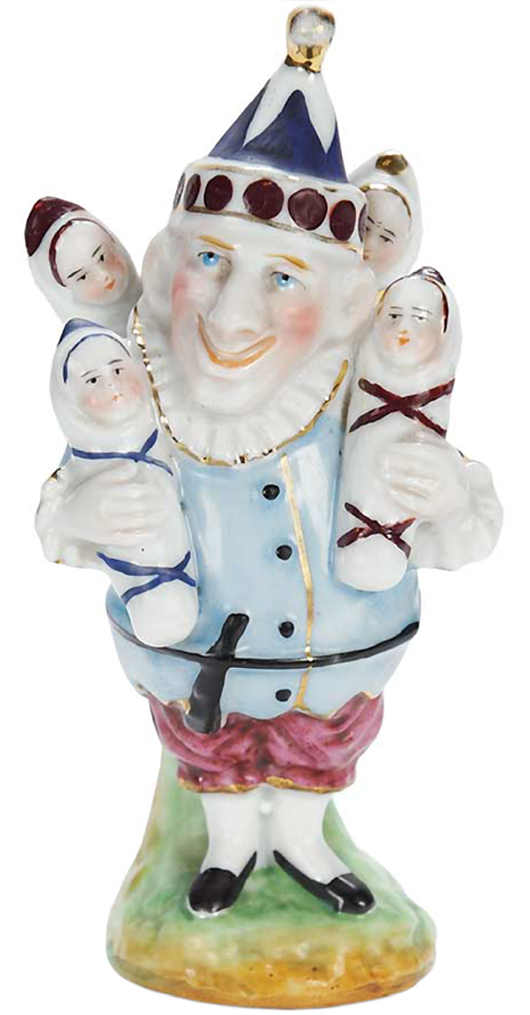 This smiling porcelain figure represents a ‘Kinder Bringen,’ a German folklore figure who brings children to brides. This jester and his children sold for $969 at a Theriault’s auction in Annapolis, Md.