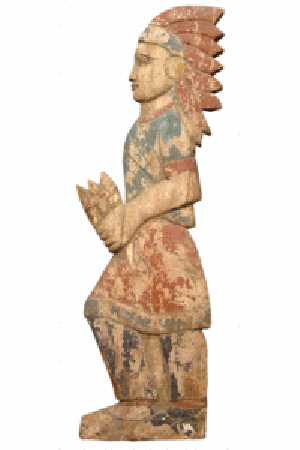 This painted cutout cigar-store Indian was made about 1900, probably in the Midwest. The back is a flat board. The front has some shallow carving to indicate the figure’s limbs and facial features. Copake Auction in Copake, N.Y., sold it for $575 in March 2010

Wooden Indians have been displayed at tobacco stores since the 19th century. Store signs at that time were often pictorial, because many customers could not read. Mayan Indians introduced tobacco to Christopher Columbus and his crew in 1492, but no one understood how the dried leaves were used. But by the 1500s, Englishmen and others were smoking or chewing tobacco. Legend says that Sir Walter Raleigh gave some to Queen Elizabeth after his voyages. By the 1800s, tobacco was used in most parts of the world and was an important agricultural crop. The wooden Indian figure was kept on the street to lure customers inside a tobacconist’s store. Other advertising figures used through the years have included a Chinese man for a tea shop and a jockey, baseball player, Uncle Sam or even Santa Claus for other businesses. The best wooden Indians were carved in 3-D from a single rounded log. Some were later made of iron. The Indian chiefs, princesses and braves were painted, and usually held a bundle of tobacco leaves or cigars. It is claimed that more than 100,000 carved store figures were in use by 1900. But new laws forced the figures off sidewalks, and most were destroyed. A well-made, well-preserved antique wooden Indian sells today for thousands of dollars. The record price for a cigar-store figure is $542,400 for a Punch figure, an English comic character (not an Indian) attributed to Samuel Robb (1851-1928), a famous American carver. A few flat Indians also are known. These are made from a flat board, and can have shallow carving or just be painted cutout figures. These folk art pieces sell for much less than the 3-D carvings.

Q: I inherited an Archie Bunker’s Grandson Joey Stivic doll, made by Ideal. It’s in its original box with an instruction sheet and has never been played with. Is there any value to it?

A: The Joey Stivic doll was made by Ideal Toy Co. in 1976. Joey Stivic and Archie Bunker were characters on the TV series “All in the Family,” which ran from 1971 to 1979. Joey’s birth was featured on the show in December 1975. Ideal advertised the drink-and-wet doll as “physically correct.” It caused a stir at the time because it was the first anatomically correct boy doll. Value: about $50.

Q: Can you tell me anything about Artistic Pottery in Whittier, Calif.? It was on Workman Mill Road in the 1940s. My father worked there prior to going to Franciscan Pottery in Glendale, Calif. He was a chemist and glaze maker.

A: Artistic Potteries operated a factory in Whittier and a showroom in Los Angeles. Little is known about the company. It was in business from about 1945 to 1948. The pottery made vases, bowls, figurines and other art pottery. Pieces are marked “Artistic Potteries California” or just “Artistic California.” Items made by Artistic Potteries show up on the Internet periodically and usually sell for under $50.

Q: I found an old bottle that has “The Boye Needle Co.” on the front and “3 oz. full measure” on the side. Any idea who made it and how old it is?

A: The Boye Needle Co. was founded by James H. Boye and two associates in 1906. The company’s first product was the “Rotary Case,” a revolving cabinet for sewing machine needles and supplies. Later, Boye Needle Co. made sewing machine parts and oil for sewing machines, typewriters, clocks, etc. It was the first company in the United States to make crochet hooks and knitting needles. The company merged with Wrights in 1989 and is now part of the Simplicity Creative Group.

Q: I have a folding rocking chair that’s marked “The Telescope Folding Furniture Co., Inc., Granville, N.Y.” I would like to know something about the company.

A: The Telescope Folding Furniture Co. was founded in Granville, N.Y., in 1903. The company is still in business making outdoor furniture.

Q: I recently acquired a pair of antique opera glasses. I hope you can tell me something about their history and value. The glasses were made by “Hirsch, Kahn & Co., Manufacturing Opticians, 333 Kearny St., San Francisco.” That’s what’s embossed on the inside of the lid of the black leather case they came in. “Hirsch, Kahn & Co.” is also imprinted on the eyepieces. The barrels, eyepieces and focus knob are mother-of-pearl. There’s an engraving on the front plate that reads, “Frank to Kate, 89.”

A: Opera glasses were very popular during the 19th century, when theater and opera played a larger part in the public’s social life than they have since the advent of movies and television. The firm of Hirsch, Kahn & Co. was in existence for only 10 years, from 1886 to 1896. So the “89” engraved on your glasses probably means that the glasses were purchased and engraved as a gift in 1889. It also is likely that the glasses were sold by Hirsch, Kahn & Co., but were manufactured by another firm, probably a French one. Many American opticians ordered opera glasses from France but marked them with their own name. Most antique opera glasses like yours sell today for $100 to $200.

Tip: Look out for reworked antique jewelry. An Art Deco diamond bracelet with a large, colored center stone may have once been a watch.

Kovels’ American Antiques, 1750-1900, by Ralph and Terry Kovel, is the book that introduces you to the collected antiques from past centuries. Learn about American antiques, from art pottery and old advertising signs to rare silver. Written to help you recognize and evaluate the valuable items of Grandma’s day. Hundreds of color photographs, marks, makers, dates, factory histories and more. Chapters on pottery, glass, furniture, silver, advertising collectibles, prints, jewelry, pewter, tools and ephemera. An easy-to-use book with current information. Available at your bookstore; online at Kovels.com; by phone at 800-303-1996; or send $24.95 plus $4.95 postage to Kovels, Box 22900, Beachwood, OH 44122.