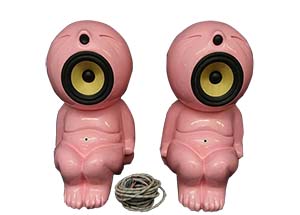 These small 6-inch-high pink Dada Baby speakers are rare bits of technology made in 1996. The seated baby figures are sound speakers that went for $3,277 at an Absolute Auctions online sale. Only 100 were made and half were lost in a fire.

BEACHWOOD, Ohio – What kind of antiques collector are you? Some collectors search for pieces from a past era; some want pieces with a connection to a famous person or event. Many collectors are furnishing a house or apartment and want antiques that are useful and well-priced.

Their bases are marked “Dada Baby Art by B & W [Bowers & Wilkins], Handmade by Blueroom Loudspeakers.” Their modern shape and color may have attracted bidders, but many technology collectors must have wanted these rare speakers. Bowers & Wilkins is an audio-equipment company founded in England in 1966 by John Bowers and Roy Wilkins, who wanted to make better sound speakers. They met an artist who thought music would sound better if played through speakers with rounded, not straight, edges and the company started making speakers in several abstract modern shapes. In 1996 B & W created its Blueroom Dada Babies. The wire for each speaker connected to the figure like an umbilical cord. The seated baby has a head that rotates to send the sound in several directions. Dada Babies originally came in five colors: blue, red, yellow, black or pink. Only a few still exist because half of the 100 speakers made in 1996 were lost in a fire. Examples are occasionally offered online or at live auctions.

We wonder whether the just-purchased “babies” now exhibited on a living room table as works of art. Or are they on a shelf with other unusual well-designed pieces of technology?

Q: I’m trying to learn something about my chest of drawers. It has three drawers with original knobs, a beveled mirror and rolled feet instead of legs. Inside a drawer there’s an old emblem with “HL” in the center surrounded by the name “Harris Lebus.” The chest is in very good condition. Can you tell me something about the maker?

A: Harris Lebus was a family-run business that became England’s largest furniture manufacturer in the 1890s. Louis Lebus, a German immigrant, opened a furniture shop in London in about 1857. Sometime after 1879, when Louis died and his son, Harris, took over the business, the name of the company became Harris Lebus. It made quality furniture inspired by the Arts and Crafts movement. During World War I, the company made airplanes, gliders, tent pins and other military equipment. Furniture manufacturing resumed after the war. During World War II, production switched to munitions, and the factory was involved in a top secret government project. Two or three wooden tanks, exact replicas of Sherman tanks, were built. They were meant to be used as decoys to fool German bombers. Harris Lebus became a public company in 1947 and later made inexpensive furniture using particle board and other woods. The company went out of business in 1969.

Q: I have a bronze sculpture of a chubby Greek god sitting on a donkey. The god has a wreath on his head and is carrying an animal pelt. It was acquired by one of my relatives, who said he was the first Allied officer to enter Hitler’s quarters at Berchtesgaden in the Bavarian Alps. It came from Hitler’s long desk in front of the large window overlooking the front of the building. The sculpture in 10 1/2 inches high and is mounted on marble. What is it worth?

A: Hitler’s quarters were bombed by the British and burned by retreating SS troops before Allied troops entered. If you can prove the bronze sculpture came from Hitler’s desk, it will be of interest to collectors. Without provenance—a letter from the officer who found the sculpture or some other proof of Hitler’s ownership—the value is the same as for any other unsigned bronze sculpture.

Q: I’m clearing out a friend’s house, and found an 8-inch-high black figural decanter. The figure is wearing a cloak and wide-brim hat and holding a red torch. The stopper is the top of the hat. The only marking on the bottom is “Wade, England.” Can you give me any information about this decanter?

A: Your decanter is called “The Don,” made for Sandeman port and sherry. The Don is holding a glass of wine, not a torch, and he’s wearing a black cape similar to those worn by Portuguese university students. The image first appeared on posters made for Sandeman by George Massiot Brown in 1928 and has been used in Sandeman ads and on bottle labels for many years. The company claims it was “the very first iconic logo for a wine.” Sandeman was founded in London by George Sandeman in 1790 and still is in business. The Wade group of potteries was founded in Staffordshire, England, in 1810. The pottery still is in business, now as Wade Ceramics Ltd. of Stoke-on-Trent, Staffordshire, England. Wade made your decanter in about 1960. Figural decanters of The Don were also made by Royal Doulton and Wedgwood. The value of your decanter is about $15. Bottles by the other more famous makers sell for about $25.

Q: I have an iron doorstop shaped like a stagecoach pulled by two horses. There are two coachmen, one sitting in front holding the reigns and one in the back blowing a horn. It’s embossed “GR and London Royal Mail, N17” and “Patent Pending.” Can you give my any information about my doorstop?

A: Most old cast-iron doorstops sold today were made from about 1890 to 1930. Many have been reproduced. The design for your coach and horses doorstop was patented by Charles Tuteur of Chicago in July 1930. Value depends on condition. Your doorstop usually sells for about $100 to $200.

Tip: If your stainless-steel knife blades stain in a dishwasher, rinse them, then dry or clean them with silver polish.

Kovels’ Antiques & Collectibles Price Guide, 2015, 47th edition, is your most accurate source for current prices. It’s available now and includes a special bonus section that helps you determine prices if you’re downsizing and selling your collectibles and antiques. If you order directly from the Kovels, you’ll receive our free Companion eBook with all of the book’s 35,000 prices—ready for downloading to your eReader. The large-size paperback has more than 2,500 color photographs 700 categories of antiques and collectibles. You’ll also find hundreds of factory histories and marks, a report on record prices, and helpful sidebars and tips about buying, selling, collecting and preserving your treasures. Available for $27.95 plus $4.95 postage. Visit KovelsOnlineStore.com , call 800-303-1996, or write to Price Book, P.O. Box 22900, Beachwood, OH 44122. 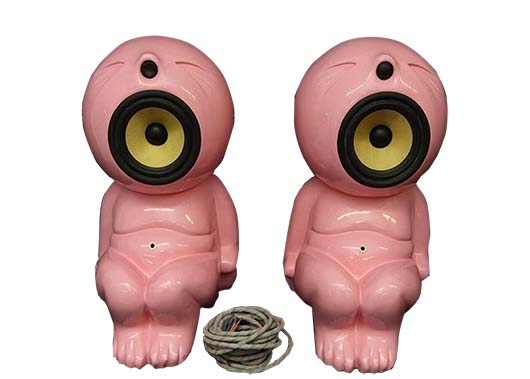 These small 6-inch-high pink Dada Baby speakers are rare bits of technology made in 1996. The seated baby figures are sound speakers that went for $3,277 at an Absolute Auctions online sale. Only 100 were made and half were lost in a fire.