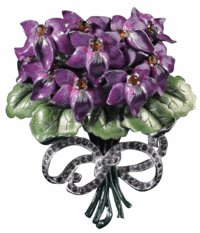 This costume jewelry pin that looks like a bouquet of violets was made by Mazer. The flowers are white metal covered with purple and green enamel. The 3-inch pin sold for $58 at a Morphy Auction in Denver, Pa.

Costume jewelry is among the best-selling collectibles in the United States today. Much of the costume jewelry made in the mid-20th century is well-designed and was created with materials that have lasted. Pieces usually are more durable and less expensive than modern costume jewelry. One of the well-known names in costume jewelry of the 1930s to the 1970s is Mazer. Joseph Mazer and his brother Louis founded Mazer Brothers in New York City in about 1927. Their jewelry was marked “Mazer,” “Mazer Bros.” or “Sea-Maze.” In 1940, they separated and Joseph started Joseph J. Mazer and Co., better known as Jomaz. His company marked jewelry “Jomaz,” “Joseph Mazer” or “Mazer.” It closed in 1981. Louis continued to work for the original company until 1951. That company went out of business in 1977. Flower pins, ribbon and bow pins featuring colored enamels, faux pearls and Swarovski crystals and rhinestones were among the Mazer brothers’ early designs. Sterling silver, gold-plated sterling and rhodium-plated metal were used in later pieces. All of the brothers’ jewelry was carefully made and sold originally at middle-range prices.

Q: I have an antique artificial leg with a peg foot that I was told dates from the Civil War era. It’s wooden with a hinged metal brace at the knee and a leather case that could be attached above the knee with laces.

A: You will have to take your prosthetic leg to a medical museum in your area to precisely date its origin, but it sounds as though the leg could date from the Civil War era. That’s when battlefield amputations led to extensive research in artificial limbs. In fact, one of the war’s early amputees, a Confederate soldier from Virginia named James E. Hanger, designed a leg for himself in 1861 and later founded a company to manufacture prosthetic legs. The company, now called Hanger Orthopedic Group, is based in Bethesda, Md., and makes all sorts of prosthetic devises for injured U.S. soldiers. The value of Civil War-era artificial legs ranges widely depending on several factors, including whether an expert has determined its age. We have seen them sell for hundreds into the low thousands. Some museums accept them as donations.

Q: I have an antique library table that has a mark on the bottom of the desk drawers that says “Wolverine, Detroit, 1887.” What can you tell me about this company?

A: The Wolverine Manufacturing Co. was organized by Frederick B. Smith in 1887. He started the furniture company with 12 men and $10,000. The company specialized in manufacturing library and parlor tables. By 1908 Wolverine claimed to be the largest manufacturer of its kind in the world. The company was out of business by 1919. An average-quality library table by a maker that is not well known is worth about $300 to $500 – in other words, it’s worth its “use” value.

Q: I have a vase with a circular mark on the bottom that includes the words “Arequipa, California” around a drawing of a vase under a tree. It has been in the family for years. Is it valuable?

A: Arequipa Pottery was made by patients at the Arequipa Sanatorium in Marin County, Calif., from 1911 to 1918. The sanatorium treated women and girls with tuberculosis. The pottery was established to give the patients something to do. Patients were taught by Frederick H. Rhead, a well-known potter who had worked at Roseville Pottery. Your vase has an early mark used when Rhead was there, from 1911 until 1913. Arequipa Pottery with this mark brings the highest prices today. Vases sell for hundreds to thousands of dollars.

Q: Our historical society has a woven rug that a visitor told us was a valuable “Brussels carpet.” It’s 70 x 82 inches with a seam down the middle. What can you tell us?

A: A “Brussels carpet” is a patterned carpet made of colored worsted yarns drawn up in loops through a foundation of strong linen thread. It’s named after the capital of Belgium, where this type of carpet was first made in 1799. But widespread production of Brussels carpets didn’t happen until 1849, when the Bigelow Carpet Co. was founded in Clinton, Mass. Erastus Bigelow had already invented a power loom for weaving carpets, and his additional invention of a mechanism to create patterned Brussels carpet is what helped the industry take off. Up to five colors were used in a row, but the way the colors alternated made it look like many more. Brussels carpets were much less expensive than the oriental rugs well-to-do U.S. families were using to cover floors, so the carpets could be found in middle-class as well as upper-class homes.

Tip: Maroon and yellowish chrome-green were never used to decorate porcelains during the 18th century. Another dating clue: Almost all 18th-century porcelain figures have brown eyes.

Need more information about collectibles? Find it at Kovels.com, our Web site for collectors. Check prices there, too. More than 700,000 are listed, and viewing them is free. You can also sign up to read our weekly “Kovels Komments.” It includes the latest news, tips and questions, and is delivered by e-mail, free, if you register. Kovels.com offers lots of collecting information and lists of publications, clubs, appraisers, auction houses, people who sell parts or repair antiques and much more. You can also subscribe to Kovels on Antiques and Collectibles, our monthly newsletter filled with prices, facts and color photos. Kovels.com adds to the information in our newspaper column and helps you find useful sources needed by collectors.

Kovels’ New Dictionary of Marks – Pottery and Porcelain, 1850 to the Present pictures more than 3,500 marks found on 19th- and 20th-century American, European and Asian pottery and porcelain. It includes factory dates, locations and other information. Marks are sorted by shape, and there’s a special section on date-letter codes and factory “family trees.” Available at your bookstore; online at Kovels.com; by phone at 800-571-1555; or send $19 plus $4.95 postage to Kovels, Box 22900, Beachwood, OH 44122.
© 2009 by Cowles Syndicate Inc.

This costume jewelry pin that looks like a bouquet of violets was made by Mazer. The flowers are white metal covered with purple and green enamel. The 3-inch pin sold for $58 at a Morphy Auction in Denver, Pa.