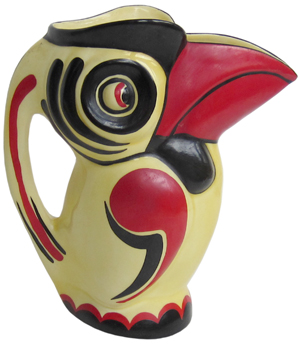 his 9-inch toucan pitcher is marked ‘Ditmer-Urbach, Made in Czechoslovakia, hand painted.’ It was bought at a flea market in 1982 for $25. Today it’s worth almost $500.

In the 1980s, collectors tried to solve the mystery of who made a series of red, black and cream-colored pitchers shaped like animals and birds. They were all marked “hand painted Erphila” in a round cartouche. Some were also marked “est. 1926,” some “Germany” and some “Czechoslovakia.”

Years of research has finally solved the riddle. The pitchers come in two sizes, 9 inches or 6 inches high. The set includes a toucan, rooster, parrot, cat, dog, ram, goat, elephant, duck and perhaps others. They were made in Czechoslovakia at the Ditmer Urbach Factory. The history of the factory is uncertain, but separate Ditmer and Urbach factories merged sometime before 1913 into the Ditmer-Urbach Factory.

The marks provide some clues. The word “Czechoslovakia” indicates a date in the 1920s. “Germany” was used later. Ebeling and Reuss, a Philadelphia importing company, ordered the set of pitchers for its customers and had them marked “E” for “Ebeling,””R” for “Reuss” and “Phila” for “Philadelphia” (Erphila). That mark was used on many types of imported decorative wares.

Q: Years ago, we bought a grandfather clock from a friend whose ceiling was not high enough for the clock. The clock is marked “Royal Furniture, Grand Rapids.” Can you tell us something about the maker and age of our clock?

A: Royal Furniture Co. was in business in Grand Rapids, Mich., from 1892 to 1931. But the company’s ownership changed in 1919, and the new owner’s name, Robert W. Irwin, was added to Royal’s marks that year. So your clock was made between 1892 and 1919. Royal made high-quality furniture, including grandfather clock cases, but the internal clock mechanism was made by another company, probably the Charles Jacques Clock Co. of New York City. Charles Jacques was known to supply some grandfather clockworks to Royal.

Q: I have inherited an antique wash bowl and pitcher set. The pieces have a matching floral blue transfer pattern. The bowl is marked “Porcelain Royale, Pitcairns Limited, Tunstall, England.” The pitcher has a different mark: “Old Hall, England, E’Ware.” Please explain the difference in the marks. How old is the set, and what is it worth?

A: Your bowl and pitcher were both made by pottery companies that operated in the famous Staffordshire district of northern England. The bowl was made in the town of Tunstall by Pitcairns Ltd., which was in business from 1895 to 1901. The pitcher was made at Old Hall Pottery in Hanley, a town not far from Tunstall. The company that operated Old Hall Pottery was called “Old Hall Earthenware Co.” from 1861 to 1886, then “Old Hall Porcelain Works” from 1886 to 1902. But even after the company’s name changed, it continued to make earthenware. It is unusual but not surprising that your bowl and pitcher were made by two different companies. Many potteries used the same transferware patterns and their items were sold in the same shops. A set like yours auctioned for $30 a couple of years ago.

Q: At a local thrift store, I recently purchased a Punch and Judy mechanical bank for $18. It looks old and is made of heavy cast iron. The bank is in the shape of a puppet-show stage, with Punch and Judy performing. If you place a coin in the plate Judy is holding and push a lever on the side of the bank, Judy turns to deposit the coin in the bank while Punch moves forward and brings down the club he’s holding in his hand. The bank is 6 inches high by 5 1/2 inches wide by 2 inches deep. What is my bank worth?

A: The original and now antique Punch and Judy Bank was patented in 1884 by Shepard Hardware Co. of Buffalo, N.Y. Shepard produced high-quality cast-iron mechanical banks until the early 1890s. Reproductions of the bank have been made in abundance since the 1950s, and it is extremely likely that your bank is one of the many reproductions. Originals are 6 1/8 inches wide; most reproductions were cast from originals – and, like yours, are smaller than originals. Genuine old Punch and Judy banks sell for close to $4,000 if the original paint is in good condition. Reproductions, depending on quality and age, sell for under $20 up to about $150. Consult an expert about the age and quality of your bank.

Q: My  old upright piano is marked “Starck Cabinet Grand, Chicago, U.S.A.” How old is it? What is it worth?

A: Starck Piano Co., also known as P.A. Starck, was in business in Chicago from 1891 to 1968. It is likely that your piano dates from the 1920s or ’30s, but you can verify that by looking for a serial number on your piano; it might be on the back of the piano or inside the case. The value of a piano is based not just on age and quality, but also on condition. A professional technician would have to look at it. Most old uprights don’t sell for a lot of money, though, because moving a piano is expensive.

Tip: Switch dishwasher detergent brands periodically. This helps to keep the inside of the dishwasher and your dishes free of any chemical buildup. Glass will have more sparkle.

Sign up for our weekly email, “Kovels Komments.” It includes the latest news, tips and questions and is free if you sign up on our website. Kovels.com lists publications, clubs, appraisers, auction houses, people who sell parts or repair antiques and more. Kovels.com adds to the information in this column and helps you find useful sources needed by collectors.

Order the set: “Buyers’ Guide to 20th Century Costume Jewelry,” Part One and Part Two. Both for our special price of $34.95. These special reports help you identify the most popular makers and designers of costume jewelry. Spot mid-century costume jewelry, Mexican silver jewelry and European and North American pieces. Learn who Hobe and Sigi are, and how to recognize a rare piece of Bakelite. Accurate, comprehensive and valuable whether you’re a serious collector or just a beginner. Available only from Kovels. Order by phone at 800-303-1996; online at Kovels.com; or send $34.95 plus $4.95 postage and handling to Kovels, P.O. Box 22900, Beachwood, OH 44122. 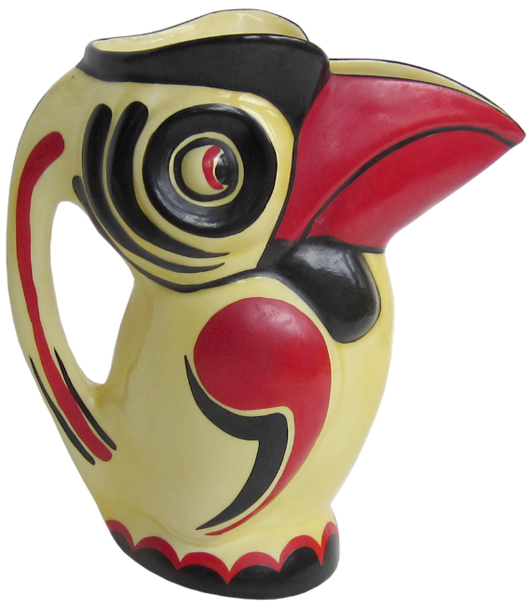 his 9-inch toucan pitcher is marked ‘Ditmer-Urbach, Made in Czechoslovakia, hand painted.’ It was bought at a flea market in 1982 for $25. Today it’s worth almost $500.