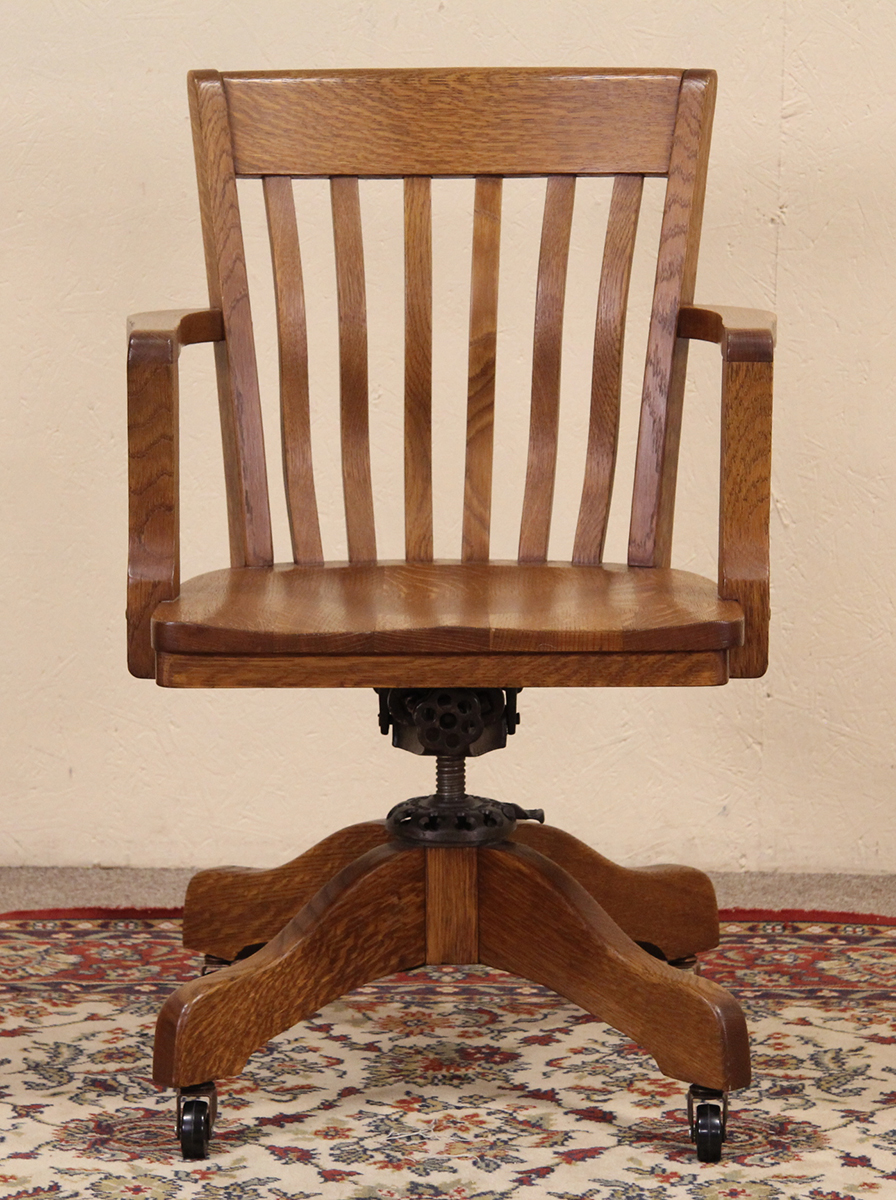 The wooden office chair of the 19th century has changed with technology. The base became iron, the chair could tilt and swivel, and the back could lean. But it all was replaced when the mesh-backed chair was introduced in 1994. This antique wooden chair is priced $695 at Harp Gallery (Harpgallery.com) in Appleton, Wisconsin.

BEACHWOOD, OHIO – Chairs have one main purpose, but they are made in multiple shapes, sizes and types of material. Pictures show chairs in ancient Egypt, but they were not in common use until the 16th century. A king or religious leader had a very large chair (throne), often with arms that had elaborate decoration. Other people sat on stools. But by the 18th century, chairs were part of everyday life for the rich. The standard shape included a high back, wooden seat, four legs, and perhaps arms. But the largest chair in the house, the seat of power, was for the husband. That tradition still remains.

Dining-room chair sets have one or two larger armchairs and about six to eight narrow chairs with no arms.

Catalogs for manufactured office furniture made from about 1850 to the present include a large chair for the company president, smaller chairs for salesmen, and narrow, lower chairs or stools for secretaries. By the 1900s, woven wicker, metal and plastic all allowed designers to create new types of chairs. The new plastic and mesh chair introduced in 1994 was less expensive and more comfortable than the standard wooden chairs used for 100 years. It was so popular, it replaced the old wooden chair, and many small wooden chair companies were forced out of business.

Q: I have a metal “Little Orphan Annie” electric toy stove. It’s red with a white top and four lithographed pictures of Annie and her dog, Sandy, on the front. There are three “burners,” a series of holes punched in the stovetop, and two ovens. The stove heats up when plugged in. It’s 8 3/4 inches high, 9 1/2 inches wide, and 6 inches deep. The sides are marked “Made in the United States” and the bottom is embossed “Louis Marx & Co., New York” and “Catalog K43.” What is the value and where can I sell it?

A: The comic strip Little Orphan Annie started in 1924. Annie and her dog, Sandy, have appeared in comic books, radio shows, movies, and musicals since then, and many toys, dishes and other memorabilia featuring the characters have been made. Louis Marx & Co. was in business from 1919 to 1978. The company made two versions of this stove. You have two ovens. The other version, K44, has an upper oven and two lower ovens. Both stoves were made in different colors and originally came with three baking pans. The stoves date from the 1930s. They wouldn’t be considered safe for children today. Online, the stoves are priced from $25 to $75.

Q: I have a clear glass Jeannette Iris and Herringbone 9-inch pitcher that has an inclusion from the manufacturer. How does this affect the value?

A: Inclusions are imperfections in the glass that happen during production. They usually don’t affect the price. Some collectors like to buy pieces with inclusions because they are unique, although most only want perfect pieces. Iris & Herringbone, usually called “Iris,” was made by the Jeannette Glass Co., of Jeannette, Pa., from 1928 to 1932 and again in the 1950s and ’70s. Pieces in clear glass and in several colors were made. Reproductions also have been made. Clear Iris pitchers sell for about $40.

Q: I have a very old wooden washing machine that was left in my grandfather’s house. It has a hinged lid. The words “The New Standard Champion Washing Machine” are stenciled on the side. How old is it?

A: Your washing machine is over 100 years old. We found an ad for the Champion Washing Machine Co. in a January 1898 magazine that claimed “Every household should have a New Standard Champion Washer. 100,000 now in use.” With such a large number in use, the machine must have been produced for more than a year by 1898. The history of the brand is confusing. Another Cincinnati company, Mollenkamp & Klausmyer, began manufacturing Champion Washing Machines in 1875. The New Standard Champion washing machine was listed as a brand of the Boss Washing Machine Co., also in Cincinnati, in 1903. Boss made its early wooden washing machines of red cypress, which was impervious to water, and tinned nails that didn’t rust.

A: Dunlap is a brand name owned by Sears, Roebuck & Co. Dunlap tools and equipment were made by several different manufacturers for Sears beginning in 1941. The brand supposedly is named after Sears hardware department’s head buyer. Your hand plow was meant to be used to till the garden. Extra attachments for it could be purchased. Old hand plows like this are sometimes offered for sale online. They are hard to sell as a tool, but someone may want it as an interesting garden decoration. Try free local ads like Craigslist.

Tip: Don’t wash Barbie; just wipe her off. Water gives her a bad hair day and if her body gets soaked, it could be damaged.

Be a smarter, more successful collector. “Kovels on Antiques and Collectibles,” our monthly newsletter, plus archives of back issues are now available on our website, Kovels.com. The searchable archives include hundreds of helpful “Kovels” newsletter articles, plus hard-to-find information about trends, prices, caring for collectibles, and how and where to buy and sell. Every issue of our concise, fact-filled newsletter is chockfull of news, sale reports, prices, money-making tips, questions from collectors and over 60 color photos. The 12-page searchable newsletter is available 24/7 at Kovels.com. Subscribers are sent a courtesy email every month when the latest issue is posted. Subscribers also receive a free weekly email update with the latest news from the collecting world, access to 900,000 prices, a directory of companies that make parts or repair or appraise antiques, and more. Visit Kovels.com for all the details. 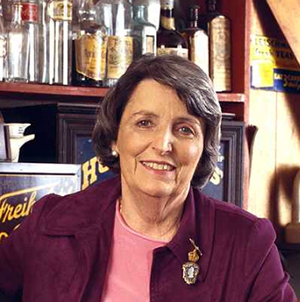