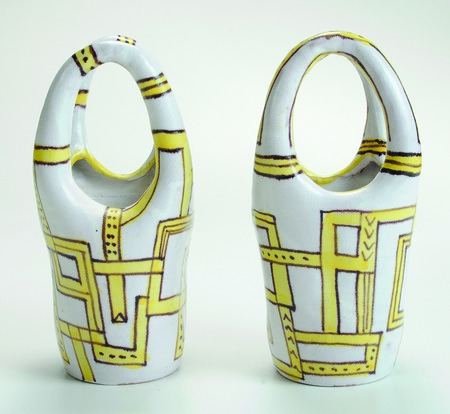 A pair of Guido Gambone vases with high looped handles and a yellow and purple geometric design sold at auction in 2015 for $4,012.

BEACHWOOD, Ohio – Guido Gambone (1909-1969) was an important Italian ceramic artist in the 1950s and ’60s. His colorful vases in modern shapes with almost comic-strip-shaped animal figures were very different from designs by earlier Italian makers. He used thick glazes that left a rough surface.

He became director at Industria Ceramica Salernitana in 1935, and in 1943, he started his own pottery in Vietri. In 1950, he moved again and worked at his own pottery with his son Bruno (1936-present).

After Guido died, his son took over the company and today makes and sells minimalist vases in muted colors, very different from the colorful abstract and playful works of his father.

Guido Gambone marked his pieces with the name “Gambone,” a donkey and the word “Italy” for many years, but some later work is signed only “Gambone, Italy.” Bruno signs all his work Gambone, Italy.

Q: We have a mission-style rocking chair with a metal tag that reads “Karpen Guaranteed Upholstered Furniture, Chicago – New York.” It has a removable cushioned seat. What can you tell me about the maker and age of this piece?

A: S. Karpen & Bros. was founded by Solomon Karpen in Chicago in 1880. Within a few years, all of his eight brothers were involved in the business. By 1899, the company was the world’s largest maker of upholstered furniture. Tables and other nonupholstered furniture were also made. A showroom opened in New York in 1905, a factory in Michigan City, Indiana, in 1916, and a factory in Los Angeles in 1927. The company was sold and became part of International Furniture in 1952. The Karpen name was used on furniture for several years. Your rocker was made between 1905 and 1916.

Q: I’d like some information on “Happy Boy,” a Royal Worcester figurine of a child lying on his back with his knees up and his hands under his head. It’s stamped on the back “Happy Boy, modeled by F.G. Doughty” and has what I think is the date stamp for 1941 and the number 3010. One source I found reads “model No. 3010, Happy Boy, was made by F. Gertner.”

A: “Happy Boy” was modeled by Freda Doughty and was produced from 1932 to 1948. Freda and her sister both worked at Royal Worcester. They were born in Italy and moved to England as children. Freda made figurines of children while her sister did large bird figurines. Happy Boy was reported as worth over $1,000 a few years ago, but the value of figurines has gone down and it may not sell for as much today.

Q: I have an old silver serving spoon marked with two crossed tools and the letters “K” above and “B” below. One of the tools is a hammer. Can you tell me who made this spoon?

A: Krider & Biddle used this mark between 1860 and about 1870. Peter L. Krider was in business in Philadelphia about 1850. John W. Biddle became a partner in 1859 and the name of the business became Krider & Biddle in 1860. The company made flatware, hollowware and medals. It was sold to new owners about 1870 and the name was changed.

Q: I have an old iron bank. The base is a 5 3/8-inch square and it’s 7 1/4 inches high. There are doors pictured on each side with the words “Columbia Bank” over each door. The bottom is marked “Made by Kenton Hdwe. Mfg. Co., Kenton, Ohio, USA.” The bank has a combination lock. Is there any information you can give me? I don’t plan on selling it, but I’m curious as to its value.

A: Collectors call your bank the “Columbia Bank.” It was made by the Kenton Hardware Manufacturing Co., which started as Kenton (Ohio) Lock Manufacturing Co. in 1890. Kenton began making toys in 1894 and changed its name. The company’s earliest known “still” banks (as opposed to “mechanical” banks that have moving parts) are the Columbia series, cast-iron banks that depict the Administration Building at the Chicago World’s Columbian Exposition of 1893 in four different sizes. Some are painted. Original cast-iron banks are popular with collectors. Your 7-inch Columbia bank was made between 1893 and 1904. They have sold for $350 to $1,100, depending on condition, especially the amount of paint still intact.

Q: Is there a market out there for a matchbook collection?

A: Matchbox collecting is a popular hobby. A person who collects matchbooks is called a “phillumenist.” Most collectors want unused matchbooks and take the matches out unless the matches have printing or pictures on them. Some people collect matches from places they have been, while others collect by type or category and keep a detailed checklist of their collection. The Rathcamp Matchcover Society has a website, Matchcover.org. The site lists collectors’ clubs, collecting tips, supplies, swap fests and collectors looking to buy or sell covers.

Tip: Leave a small air space between the wall and the back of a painting to allow air to flow. “Bumpers” to put on the back of pictures are available at frame shops.

Sign up for our free weekly email, “Kovels Komments.” Terry Kovel writes about the latest news, tips, questions and her views of the market. If you register on our website, kovels.com, there is no charge.

Keep up with changes in the collectibles world. Send for a free sample issue of our 12-page, color-illustrated newsletter, “Kovels on Antiques and Collectibles,” filled with prices, news, information and photos, plus major sale reports and opinions about the world of collecting. An important tool for anyone who buys, sells or collects antiques and collectibles. To subscribe at a bargain $27 for 12 issues, write Kovels, P.O. Box 8534, Big Sandy, TX 75755; call 800-829-9158; or subscribe online at KovelsOnlineStore.com.
© 2015 by Cowles Syndicate Inc.