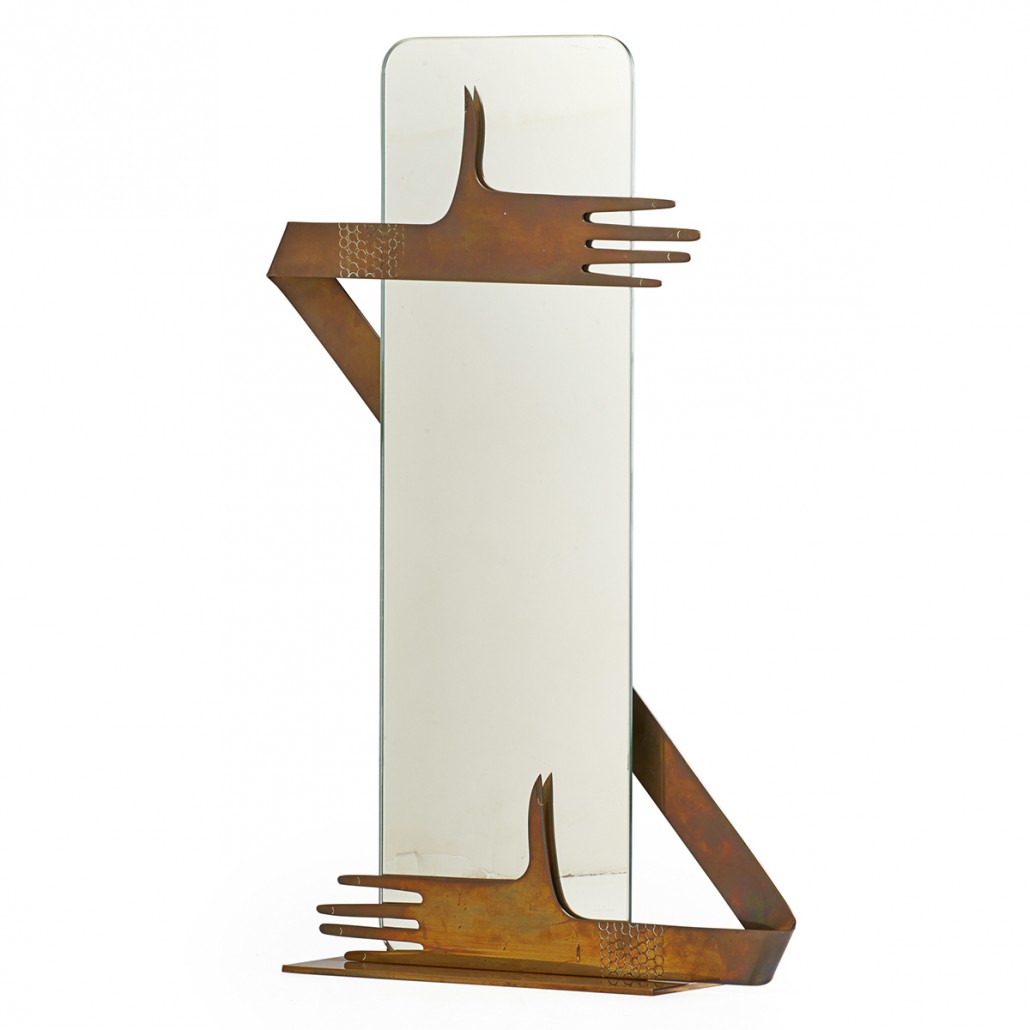 This unusual tabletop mirror with brass hands was made in Austria. It is stamped ‘WHW/Franz/Hagenauer Wien/Made in Austria.’ Rago Arts and Auction Center sold it for $4,063 in February.

BEACHWOOD, Ohio – Although the design of the late 1890s is best known for the sensuous curves of the Art Nouveau period, there were very modern-looking pieces being made by a few European designers. Some of the most famous were in Vienna, Austria.
Carl Hagenauer started his own Werkstatten (workshop) in 1898 to make bronzes and other metal wares. He was soon winning awards for his innovative, modern-looking designs. His son Karl (1898-1956) joined the company in 1919 and, with his brother Franz (1906-1986), created a group of small bronzes inspired by African art.

The figures, dressed in tribal clothing, had long, thin arms, legs and faces, which were almost like stick figures. Many small tabletop groups were made in the 1920s through the early 1950s.

These Hagenauer pieces are not hard to find at auctions and shops at reasonable prices. But the larger wood and metal African figures, masks and the Art Deco designs made at the same time are pricier. By the 1960s, the company was making large Western figures of brass and even furniture. The shop closed in 1986. But the popular figures, often copied in South America in the 1950s, were again copied in Great Britain in the 1990s. Many made by an ex-Hagenauer employee are marked RR. Both the well-made copies and the originals are going up in price.

Q: My small gold-colored ring has a baseball batter on signed “Andy Pafko.” The top looks like a baseball and has small dials near the edges that show balls, strikes and outs. Two baseball bats with a glove between them are on both sides. What is this ring worth?

A: You have an Andy Pafko Scorekeeper Ring, a premium issued by Quaker Oats Muffets breakfast cereal in 1949. It was offered for 15 cents and two Muffets box tops. Pafko (1921-2013) played in the Major Leagues from 1943 to 1959 and was a centerfielder for the Chicago Cubs, Brooklyn Dodgers and Milwaukee Braves. Value of your ring, $200 to $400.

A: James Ritty, a saloon owner in Dayton, Ohio, is credited with inventing the first commercially successful mechanical cash register in 1879. His machine was known as the “Incorruptible Cashier.” Multiple drawers were used to keep each employee’s transactions separate. Only the employee assigned to the drawer or the owner could open the drawer. The letter “C” wasn’t used because it usually stood for “cash.” Ritty soon sold the rights to his invention to J.H. Eckert, who founded the National Manufacturing Co.. The company was sold in 1883 and became the National Cash Register Co. in 1884.

Q: I inherited an old postcard picturing the Titanic from a grandparent in England. It has a vertical color picture of the ship under way in the middle of the ocean. The postcard is in very good condition. Is it valuable?

A: Many different postcards picturing the Titanic have been made. Those that were published before the ship sank in 1912 can sell for about $100 to several hundred dollars, depending on rarity and condition. Look at places online that sell Titanic memorabilia. Some sell postcards. You might copy your postcard and send it to someone online that is selling Titanic memorabilia. Anyone who sells Titanic postcards first has to buy them from someone like you. Your grandmother probably had an authentic old card. An expert can identify it.

Q: I have an RCA radio that was a gift to my parents in the late 1930s or early 1940s. It’s 11 inches wide by 7 inches high. It has all its tubes and still works. Can you give me a more accurate date when it was made and the value it has today?

A: Your radio is RCA Victor Model 65X2, made as late as 1947. It’s a superheterodyne five-tube tabletop radio designed to receive AM radio broadcasts. The cases were plastic and made in two colors, antique ivory or walnut. RCA Victor advertised the radiosleek styling as small enough to “tote from kitchen to laundry to bedroom to breakfast table,” its Golden Throat tone system and low price. In the 1941 movie The Maltese Falcon, an example of this radio model is shown in the office of private detective Sam Spade (Humphrey Bogart). Your radio retailed for $27.95. Examples have sold for $25 (in nonworking order) to $100 (restored) to $199 (mint condition.)

Q: My dark brown teapot with lid is 4 inches high and has yellow and green leaves. The bottom is marked “Royal Canadian Pottery.”

A: The Royal Canadian Art Pottery opened in 1946 as a subsidiary of Foley Potteries Ltd. They have factories in Hamilton and Southampton, Ontario. The company specialized in “Brown Betty”-style teapots in dark brown or black that are hand-painted or have drippy or sponged decoration. By 1960, RCAP had become the largest teapot manufacturer in North America. The company began to make art pottery in 1968. Teapots like yours sell for $10 to $20.

Ralph and Terry Kovel, authors of Kovels’ Antiques & Collectibles Price Guide, collectors and authorities on antiques, hosted the award winning House and Garden (HGTV) series Flea Market Finds with the Kovels. Season 4 of the TV series is now available. Enjoy the shows again and explore the most exciting flea markets in the country. In the season’s 12 programs, Ralph and Terry share their secrets – when and where to shop, what to look for, and how to make a good buy. Available online only at KovelsOnlineStore.com for $29.95, plus $4.95 postage; by phone at 800-303-1996; or mail a check to Kovels, P.O. Box 22900, Beachwood, OH 44122.