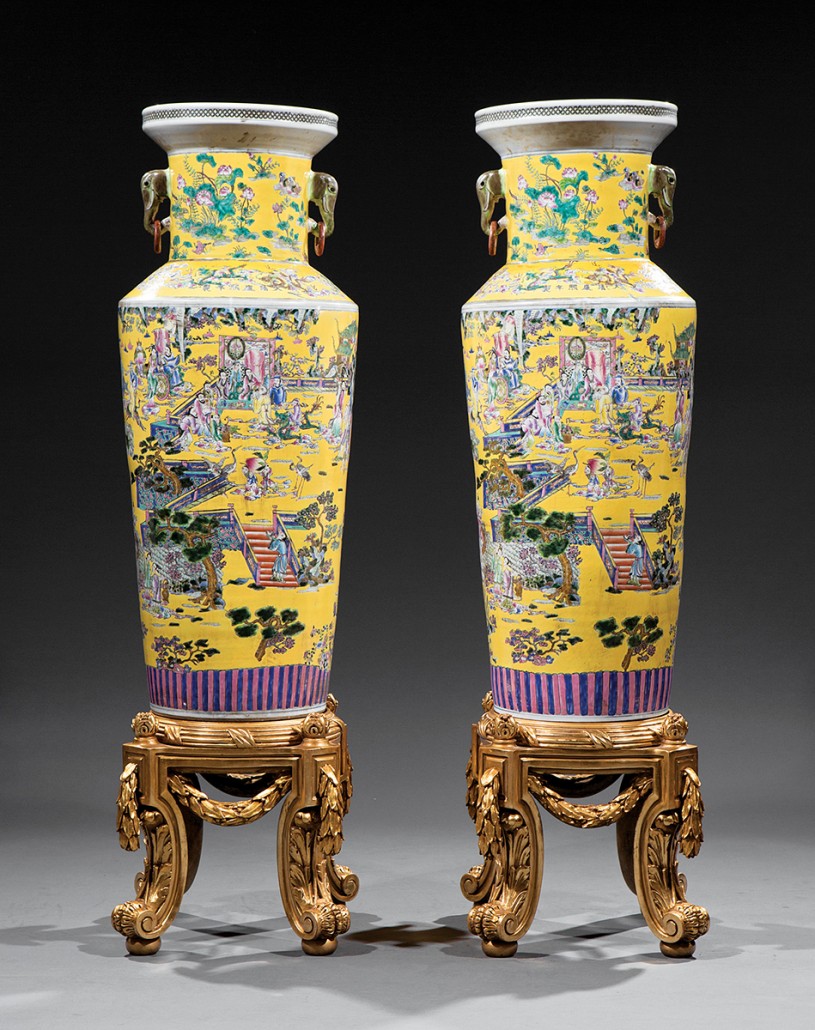 This 60-inch-high pair of Chinese clobbered famille rose porcelain vases from the 19th or 20th century sold recently for $4,780 at a Neal auction in New Orleans. They have multicolored decorations and a yellow ground.

BEACHWOOD, Ohio – Is an antique “clobbered” Chinese vase a valuable Asian ceramic? Fifty years ago, if you were clobbered it meant someone beat you up. Recent auction catalogs have been describing porcelains using this word, and at an April 2015 Neal auction, a pair of very large “clobbered” famille rose porcelain vases sold for $4,780.

The term clobbered has been used since the end of the 19th century. It meant patched or worn. In about 1970, we were appraising an estate, and the family had a 17th- or 18th-century, bright-yellow Chinese plate with blue-and-white decoration that they were donating to an art museum. We took it to the museum expert, along with other Chinese porcelains that were being donated. He took the plate and much to our surprise, he climbed on his desk, held the plate close to the ceiling light fixture and said, “Clobbered. We can’t accept it.” The light showed that the plate was old with original blue-and-white decoration. But sometime, probably in the 19th century, someone in Holland, England or some other European country enhanced the salability of the plate by adding the yellow glaze.

Porcelains that were too plain or slightly damaged were given added color by filling in the blue and white lines of a flower or adding a new border, flowers, animals, birds or even landscapes. Yellow, red and green enamel was added and “burned in” so it was permanent.

Today, that clobbered piece would be bought for its decorative value and sell for far less than an original multicolored plate but more than a similar modern plate.

Q: I have a champer chest that was brought from China right after World War II. It is heavily carved on all sides with figures, some on horses and trees. All around the border are carved flower heads and overlapping leaves. It also has a shaped brass clasp. It’s 23 inches high, 41 inches wide and 20 inches deep. Can you tell me what it might be worth?

A: Your chest is a camphor, not champer, chest, so called because it’s lined with camphor wood. In the 18th and 19th centuries, camphor chests were used to carry tea, silks and porcelain from China to Europe and America. Camphor wood has a fresh scent that is like eucalyptus, and is a natural repellent against moths. The outside of your chest probably is teak or rosewood. Sometimes the chests were plain, but usually they have ornate carving with ships, warriors and dragons. Camphor chests also were used to store blankets, linens, clothes and papers. They were popular in American homes in the 1930s and ’40s, brought home by Americans who lived in China or sailors who were stationed in Asia. Camphor chests made in the 20th century sell for $50 to $400, depending on size, carving and condition. Chests from the 19th century sell for much more. Yours probably is worth about $200 to $300.

Q: I have an old tin photograph of Jessie James, his brother, Frank, and an unidentified man. It’s been passed down in my family from my great-great-grandfather. The story goes that he was given the picture by Jessie James. It’s in excellent shape. Is it valuable?

A: Collectors are interested in pictures of the Old West and of outlaws, but the value depends on rarity and authenticity. The only known picture of Billy the Kid sold for over $2 million dollars in 2011. Pictures of Jessie James (1847-1882) and his brother Frank (1843-1915) are fairly common. The brothers grew up on a farm in Missouri. During the Civil War, they were part of a group of Confederate guerilla fighters that operated in Missouri. After the war they belonged to a gang that robbed banks, stagecoaches and trains, and murdered several people in the process. Jessie was killed by one of the gang members for the ransom money that was offered for his capture “dead or alive.” Frank turned himself in and led an honest life after that. An expert with knowledge of historical photographs would have to authenticate your picture to determine the value. If there is no way to prove it’s really the James family, the tintype is worth under $100.

Q: My set of three porcelain bottles shaped like golfers is inherited from my father. I assume they are at least 50 years old. They are 13 inches high and have removable heads with cork stoppers. The bottoms are marked “Duffer” – Nos. 1, 2 and 3, and “Genuine Porcelain, Designed by B. Hasenstrab, Made in U.S.A.” Could you tell me something about them? Value?

A: Your golf figures originally held blended Scotch whiskey made by Whyte and Mackay of Glasgow, Scotland. In the 1950s, many whiskey companies found that putting their liquor in decorative collectible bottles increased sales. Historical, political, sports and other whimsical figures, entertainers, animals, birds and even vehicles and events have been commemorated as whiskey decanters. Interest peaked in the early 1970s. Your set of three Duffers was designed and modeled by Bernard Hasenstab in 1969. They were made by California Originals, a ceramics company that operated in Torrance, California, from 1955 to 1982. There is little interest in figural whiskey decanters from the 1960s and ’70s today. They are offered in online shops for about $20 but rarely sell. Your bottles may have greater appeal and value as a crossover collectible to a golf enthusiast.

Tip: Textiles need to “breathe.” Don’t put them in high stacks or hang them in tight groups. Leave room for air to circulate.

“Kovels’ A Diary: How to Settle a Collector’s Estate.” Our new week-by-week record of the settlement of an estate, from your first days gathering legal papers to the last days when you’re dividing antiques among heirs and selling everything else – even the house. How to identify pottery, jewelry and other popular collectibles. Tips on where and how to sell furniture, jewelry, dishes, figurines, record albums, bikes, and even clothes. We include lots of pictures and prices and explain the advantages of a house sale, auction, selling to a dealer, or donating to a charity. Learn about how to handle the special problems of security and theft. Plus a free current supplement with useful websites, auctions lists and other current information. Available only from Kovels for $19.95 plus $4.95 postage and handling. Order by phone at 800-303-1996; online at Kovels.com; or write to Kovels, P.O. Box 22900, Beachwood, OH 44122.