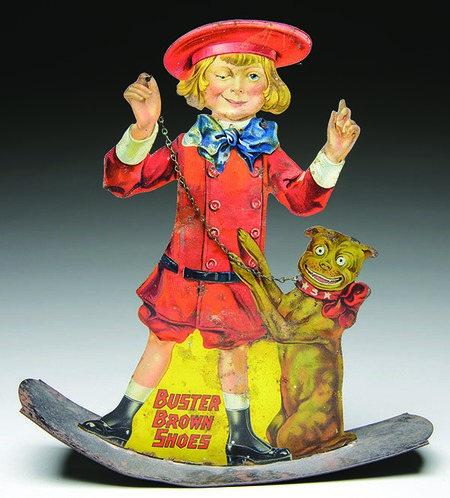 Buster Brown and Tige have been the faces in ads for Buster Brown shoes since 1904. This tin sign, made to rock on a store counter, auctioned for $1,778 in 2015.

BEACHWOOD, Ohio – Buster Brown first appeared in a comic strip in 1902. He and his dog, Tige, were characters in the very popular strip, but they became even more famous as a trademark for many products.

The creator of the strip, Richard F. Outcault, went to the 1904 St. Louis World’s Fair and sold the rights to use his cartoon characters to about 200 companies. Three companies still use the character and the name: Brown Shoe Co., Buster Brown Apparel Inc. and Gateway Hosiery, makers of Buster Brown socks.

There was a Broadway show featuring Buster Brown in 1905. Although the strip was discontinued in 1920, there were movies with live actors from 1925 to 1929.

Collectors want all sorts of memorabilia from toys and games to advertising signs. A vintage 9 1/2-inch-high Buster Brown die-cut tin sign was sold at an auction in Maine in June for $1,778. It was made with a curved bottom so it would rock on the store counter and attract attention.

A: Tiffany & Co. tea infusers sell for about $100. The company started in 1837 when Charles Lewis Tiffany and John B. Young opened a “stationery and fancy goods” store. The company began making silver hollowware in 1851 and was the first American company to adopt the British silver standard, .925 parts of silver out of 1,000 parts. It became famous for its silver hollowware and flatware and also for jewelry. When Charles Lewis Tiffany died in 1902, his son Louis Comfort Tiffany became the company’s first art director. He started his own business and made stained glass, lamps and many types of art glass. Tiffany & Co.’s flagship store is on Fifth Avenue in New York.

Q: A few months ago your column included a picture of a bookcase-cabinet that sold for over $5,000. We have a similar one in black walnut with a lot more detailing on it that belonged to my mother-in-law and father-in-law, but they always called it a “secretary.” What is the difference?

A: A secretary is a desk with a bookcase top. Most of them have slant-front desks with drawers below. The auction house described the piece in our column as a bookcase and cabinet. It had a drop-front that looked like a drawer but opened up and became the desktop. The drawers below were closed off by doors, similar to a cabinet.

Q: We inherited a C19 Chippendale Edison Diamond Disc phonograph. It’s in excellent condition and has a full rack of records in the cabinet. We also have the key that locks the top lid and bottom door. We don’t want to sell it, but are wondering what it’s worth.

A: Although Thomas Edison invented the phonograph, his company was one of the last to switch from cylinder recordings to disc records. The first Edison Diamond Disc phonograph, so named because it had a diamond stylus, was made in 1912. Several models were made until 1927. There are not a lot of collectors for these. In excellent condition it’s worth about $300.

Q: We’d like some information about Lorraine Sarreguemines pottery. We have many pieces and are trying to decide whether to sell them or buy more to complete the set.

A: Porcelain was made in Sarreguemines, Lorraine, France, beginning about 1775. Transfer-printed wares and majolica were made in the 19th century. The 19th-century pieces, most often found today, usually have colorful transfer-printed decorations showing peasants in local costumes. Used dinnerware is difficult to sell. Some resale shops won’t even take it. If you decide to add to your set, you should look online for a china-matching service.

A: Jacot and Sons was an importer in New York City that held patents for a device that “checked” the music box cylinder and kept it from spinning too fast and damaging the pins and teeth of the combs. Most of the boxes with Jacot’s Safety Checks were made by Mermod Freres of Ste. Croix, Switzerland. In working condition it could sell for as much as $900.

Q: I went to an estate sale that had a great collection of vintage lipstick tubes. These were ornate lipstick tubes, even mini works of art in gold, silver, wood, bakelite, celluloid, and enamel. There were at least 250 of them. Each tube had a piece of paper rolled inside with the date it was purchased, from the 1920s through the 1940s. I bought several tubes but regret not buying the lot. Was there any monetary value to this collection?

A: A collection is worth about 25 percent more than the total value of the individual tubes. The lipstick tubes you bought are not worth what you paid even if they are no longer part of a large collection. Lipstick tubes by famous designers in 18-carat gold or precious jewels sometimes sell for several thousand dollars. A Van Cleef & Arpels 18K gold lipstick tube case sold recently for $2,460. Ordinary tubes by an unknown maker sell for $5 or less. Some special tubes for popular brands also are popular.
Tip: An early knife with a pointed end was used to get food to your mouth. Forks were invented in the 18th century and after that table knife ends were rounded.

“Kovels’ Antiques & Collectibles Price Guide, 2016,” 48th edition, is available now and includes a special bonus section special bonus section that tells you how and where to sell if you’re downsizing, settling an estate or selling your antiques. If you order directly from the Kovels, you’ll receive a free Companion eBook with all of the book’s 32,000 prices-ready for downloading to your eReader. The paperback has more than 2,500 color photographs 700 categories of antiques and collectibles. Available for $27.99 plus $4.95 postage. Purchase directly from the Kovels if you want the free eBook Companion and be sure to include your email address. Visit KovelsOnlineStore.com, call 800-303-1996, or write to Price Book, P.O. Box 22900, Beachwood, OH 44122.

Specialists of the South to sell special estates Nov. 14
Scroll to top