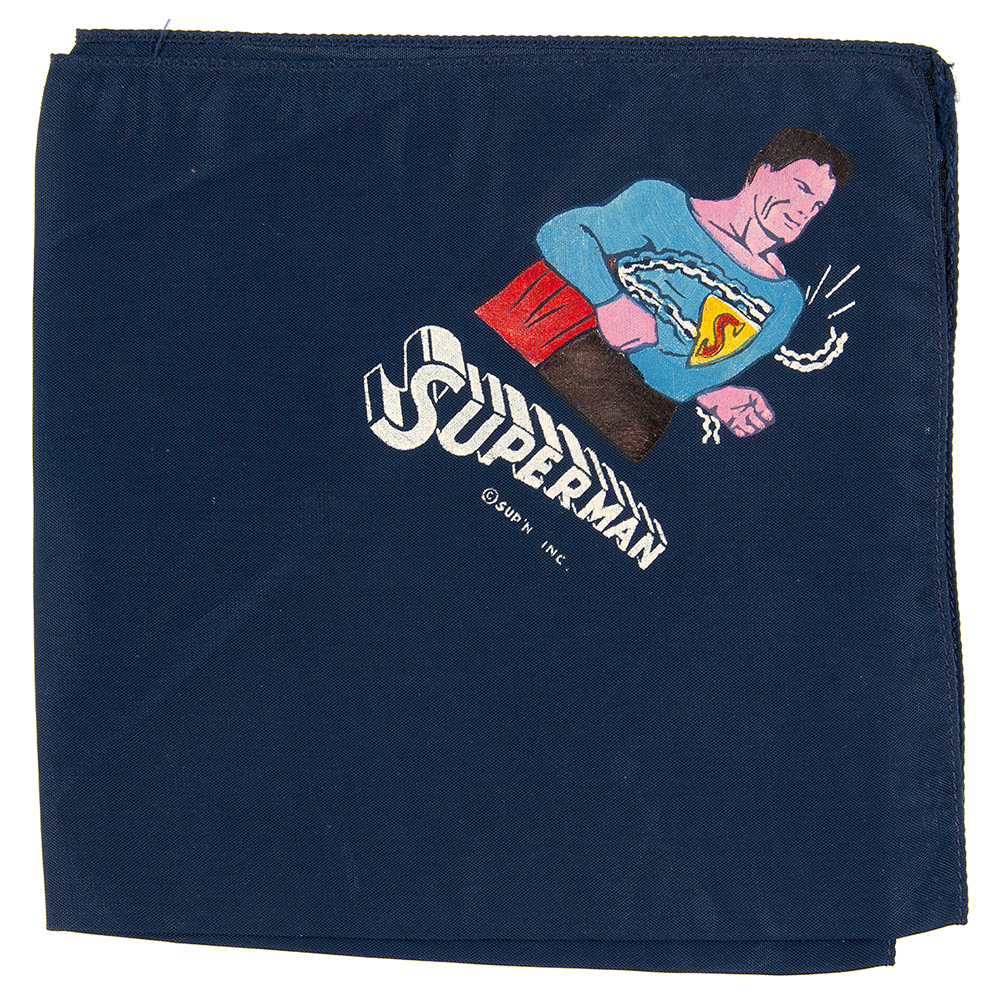 It took a super price to buy this rare Superman handkerchief at a Hake’s Americana & Collectibles auction last year. It’s 11 3/4 inches square and sold for $5,705.

BEACHWOOD, Ohio – It was a surprise when a 1940 handkerchief picturing Superman sold for $5,705 at an online Hakes Americana and Collectibles sale in 2014.

Superman was “born” in 1933 in Cleveland, Ohio. He was created by high school students Jerry Siegel and Joe Shuster.

Detective Comics Inc. (later DC Comics) bought the idea in 1938. Superman first appeared in a comic book, Action Comics No. 1, in June of that year.

He was also seen in comic books, radio, movie cartoons, newspaper comic strips, television, movies, video games and even a Broadway show. His likeness appeared on lunch boxes, toys, clothes, sheets, figurines, banks, handkerchiefs, Superman club items, jigsaw puzzles, Halloween costumes, posters, paper dolls, bubble gum and trading cards. He became an icon, and not only his picture but even his yellow shield with the red “S” is recognized internationally.

Collectors want anything related to Superman or his alter ego, Clark Kent. The rayon handkerchief pictures Superman from the waist up, breaking chains across his chest. It was made in 1940 and has “Superman” and “© SUP’N” (copyright for Superman Inc.) written below the picture. There is one other known handkerchief design with a full-figure picture of Superman, but it is not as rare as this version.

Q: I have a smoking cabinet or side table that is 25 inches high, 15 inches wide, and 12 1/2 inches deep. It has two doors and one drawer. The inside of the cabinet is lined with some kind of metal on top, bottom and three sides. The drawer is not lined. What was it used for, and is it worth anything?

A: The metal-lined cabinet is a humidor, used for storing cigars, cigarettes or tobacco. The lining controls the humidity for the tobacco. The drawer was used to store smoking accessories. Smoking stands, cabinets and tables were popular in the 1930s and ’40s when smoking cigars and cigarettes was more common. Now that there are fewer smokers, they’re often used as side tables. They sell for about $150 to $200.

Q: I heard there are different colors for the marks of Japan and that some are rare and some are not. I have several pieces of china made in Japan. Some are marked “Occupied Japan” and some just “Japan.” Some have black marks, some red and some green. Which colors are rare?

A: Marks on Japanese pottery can be found in several colors, including red, green, blue, yellow, brown and black. Some claim certain colors mean the item is worth more. One source says Noritake used a green mark on its “first grade” china and a blue mark on its “second grade” in the early 1900s. Some think the color indicates when the mark was used. However, this doesn’t seem to be true because the same mark may appear in different colors on similar pieces made the same year. A better indication of age is the wording accompanying the mark. All items imported into the U.S. after 1891 had to be marked with the country of origin. They could be marked “Japan” or “Nippon,” the Japanese word for Japan. Items marked “Made in Occupied Japan” were made between Sept. 9, 1945, and April 28, 1952, during the Allied occupation of Japan.

Q: I have a very old cuckoo clock. It belonged to my great-great-great-grandparents. It must have been made in the early 1800s. On the hour, a boy and girl pop out of the house-shaped clock and a cuckoo sings. On the half hour, a cuckoo appears and chirps once. I know it is old because it is powered by pinecone-shaped weights on a chain. I have to reset the chain once a week. I have seen many new ones that look like my hand-carved wooden clock but they run on a battery or an electric plug. Can you tell me why the cuckoo clock idea evolved, and what my antique clock is worth?

A: The first cuckoo clocks were made about 1630 in Germany, but it was not until 1738 that the clock like today’s was designed. The maker, inspired by a church organ, created a way to make the bird’s song. He used bellows and whistles to imitate the cuckoo. His first clock was made of paint-decorated wood, and the cuckoo came out of a small door to announce the time. Local craftsmen made many of the cuckoo clocks. The house-shaped clocks were sold by peddlers who carried them from Germany to France and many other parts of Europe. The design has changed slightly during the past 200 years, reflecting the popular styles of the day. But the house, the shaped weights and the cuckoo remained. By Victorian times, the building had more decorations. Often, carved birds, leaves, even deer heads and other animals were added. Your style clock probably was made anytime from about 1850 to 1950. Batteries and electric motors were added to many clocks later. But you still can buy a very traditional clock with weights. Because it is difficult to trace the history of a handmade piece, collectors tend to buy the clock to use or, if isn’t working, to admire. The case size and quality and added decorations determine value. The greater the number of cuckoo and other moving figures there are, the higher the price. New clocks are sold for $50 to about $350. Old ones are not selling for much more, unless they’re very large or unusual. Amazing large examples have sold for over $3,000.

Tip: Rinse silverware immediately after dinner, especially if there has been salt or an acid like lemon juice or tomatoes on the menu. They damage the surface.

The Kovels have navigated flea markets for decades. Learn from the best. “Kovels Flea Market Strategies: How to Shop, Buy and Bargain the 21st Century Way” by Terry Kovel and Kim Kovel tells you about the latest smartphone apps and websites to help you shop, share and ship as well as what to wear, what to bring and, most importantly, how to negotiate your way to a bargain. Also, tips on spotting fakes, advice about paying for your purchases and shipping suggestions. Full color booklet, 17 pages, 8 1/2 by 5 1/2 in. Available only from Kovels for $7.95 plus $4.95 postage and handling. Order by phone at 800-303-1996; online at Kovels.com; or mail to Kovels, Box 22900, Beachwood, OH 44122.

by Terry and Kim Kovel