LONDON — The capitol city is suddenly awash with sculpture. Henry Moore is everywhere; Helaine Blumenfeld’s reputation is growing; Giacometti is hogging the art market headlines; a major Barbara Hepworth survey is about to open at Tate Britain; Greek-born sculptor Sophia Vari is aiming to make a splash in Mayfair. 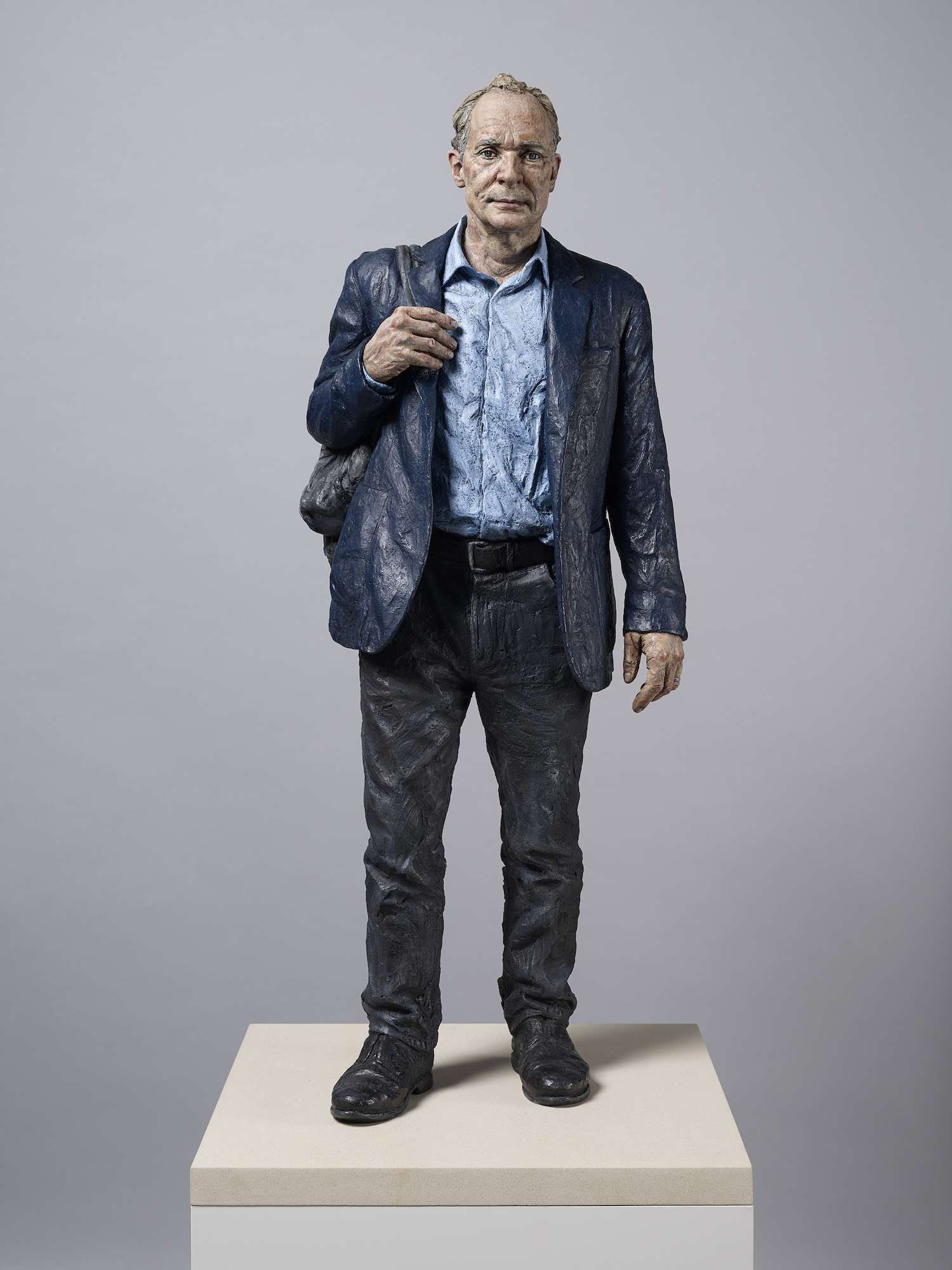 Sean Henry has established an international reputation for his compelling, hand-painted bronze figures, some slightly smaller than life-size, some slightly larger, the majority of which are presented as anonymous individuals. His portrait of Berners-Lee is thus something of a departure for the artist, who rarely ventures into portraiture proper. After visiting the computer scientist in Boston, Henry presented him two-thirds life-size in a relaxed pose, carrying over his shoulder his favorite leather satchel containing his laptop. It’s a fine example of Henry’s ability to alight on the extraordinary in the everyday. 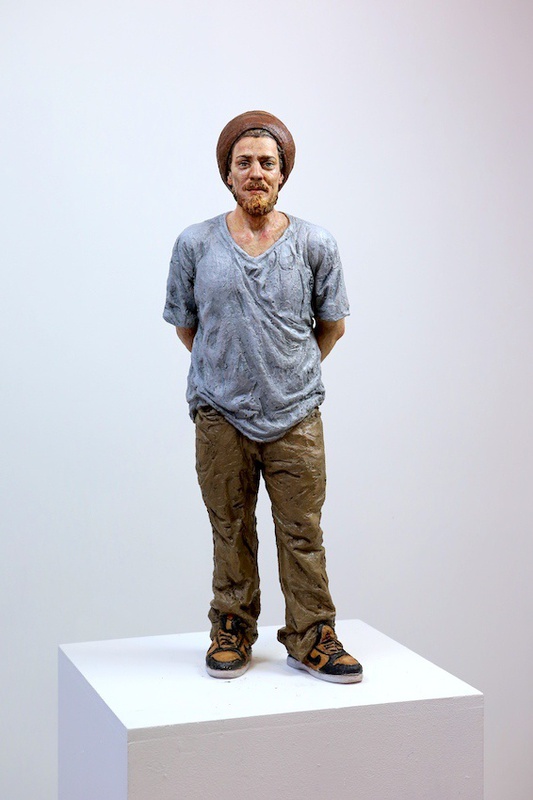 The Berners-Lee commission further underscores the recent revival of interest in sculpture. Later this year the National Portrait Gallery will stage an exhibition of works by the Swiss-born French modernist sculptor Alberto Giacometti (1901-1966). It will be the first exhibition solely to consist of portraits by Giacometti and will mark the 15th anniversary of the artist’s death. Woman of Venice V to be included in “Giacometti: Pure Presence,” which will run from Oct. 15 to Jan. 10, 2016. Image © National Portrait Gallery, London. 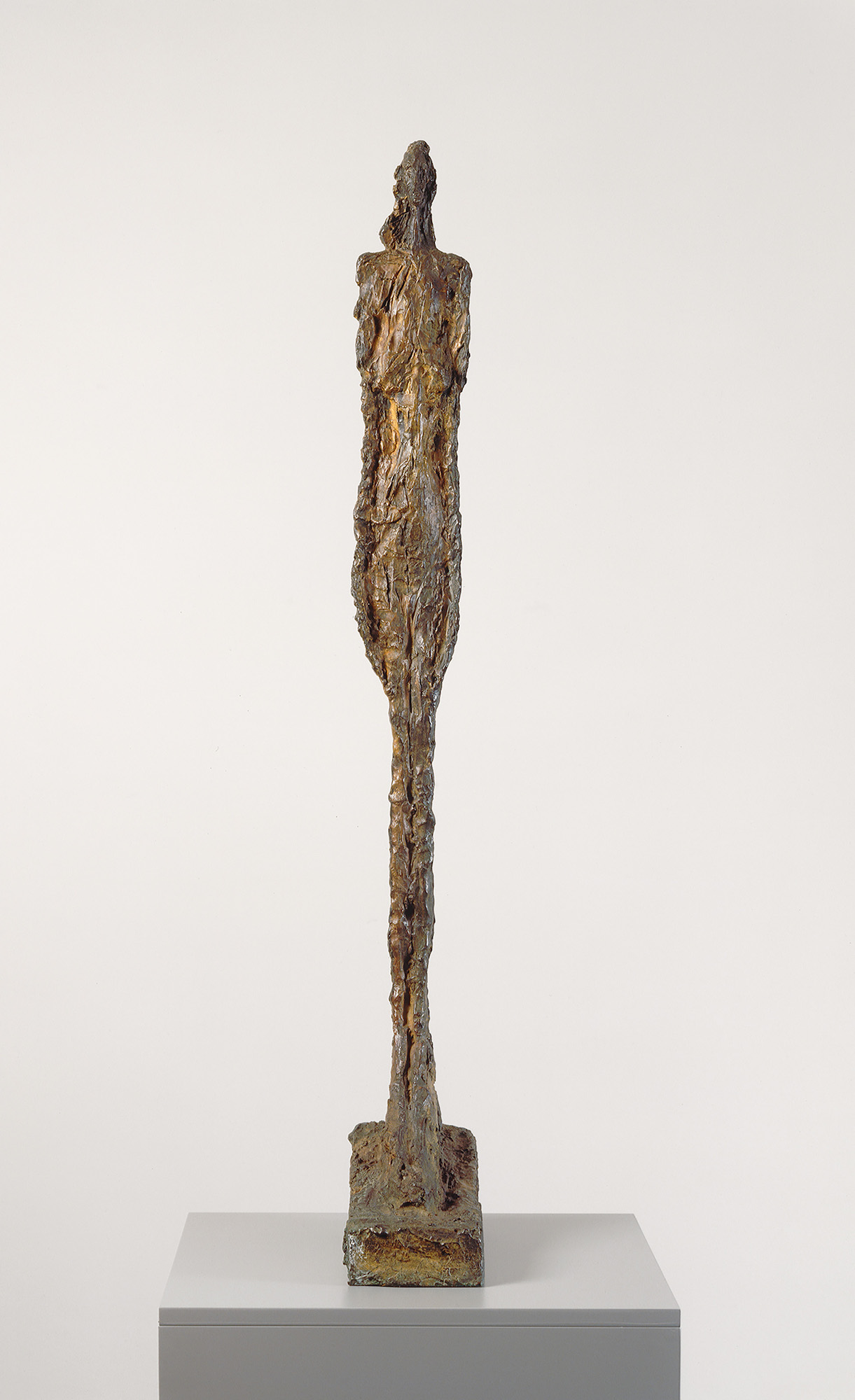 This is all good news for sculpture, which for too long has been regarded as difficult and of secondary interest to “flat art.” The 19th-century French art critic Charles Baudelaire witheringly described sculpture as “boring,” while the postwar New York abstract expressionist Ad Reinhardt famously dismissed it as “something you bump into when you back up to look at a painting.”

But something has happened. Today, if you bumped into a piece of sculpture you could be bumping into the equivalent of hundreds of millions of dollars. While such jaw-dropping sums have long been commonplace at sales of Impressionist and Modern paintings, it is only relatively recently that modernist sculpture has started to scale those heights. We can confidently take this as yet another index of the extent to which the top of the art market is now driven exclusively by unimaginably wealthy individuals seeking a safe store for their surplus liquidity.

More recently, it has been Brancusi’s Swiss-born contemporary Giacometti who has become the focus of major league sculpture collectors. In 2010, the Brazilian billionairess Lily Safra forked out £65 million ($103.4m) to secure the artist’s 1960 work, L’homme Qui Marche I (Walking Man I), at Sotheby’s London, but even that was dwarfed earlier this month when his L’homme au doigt (Pointing Man) of 1947 crept up — in $1-million increments — to an eye-watering $141.2 million (£91.4m), including auction fees, on May 11 at Christie’s New York. The work established a new record for the artist.

Wandering through Mayfair on May 21 you’d have been forgiven for assuming that Henry Moore had been resurrected. No fewer than three galleries had major exhibitions of the artist’s work on display: Osborne Samuel in Bruton Street, Waddington Custot in Cork Street, and Bowman Sculpture in Duke Street. Osborne Samuel had some superb, rarely seen works and one or two things that have never been on public display, so it was not surprising to find the Moore Foundation’s chief curator David Mitchinson in attendance.

Meanwhile, Bowman Sculpture was quite literally heaving with aficionados of the work of British sculptor Helaine Blumenfeld whose work was shown “in dialogue” with that of Henry Moore. Blumenfeld (below, center) greets visitors to the private view of her exhibition at Bowman Sculpture on May 21. The exhibition continues until June 30. Image Auction Central News. 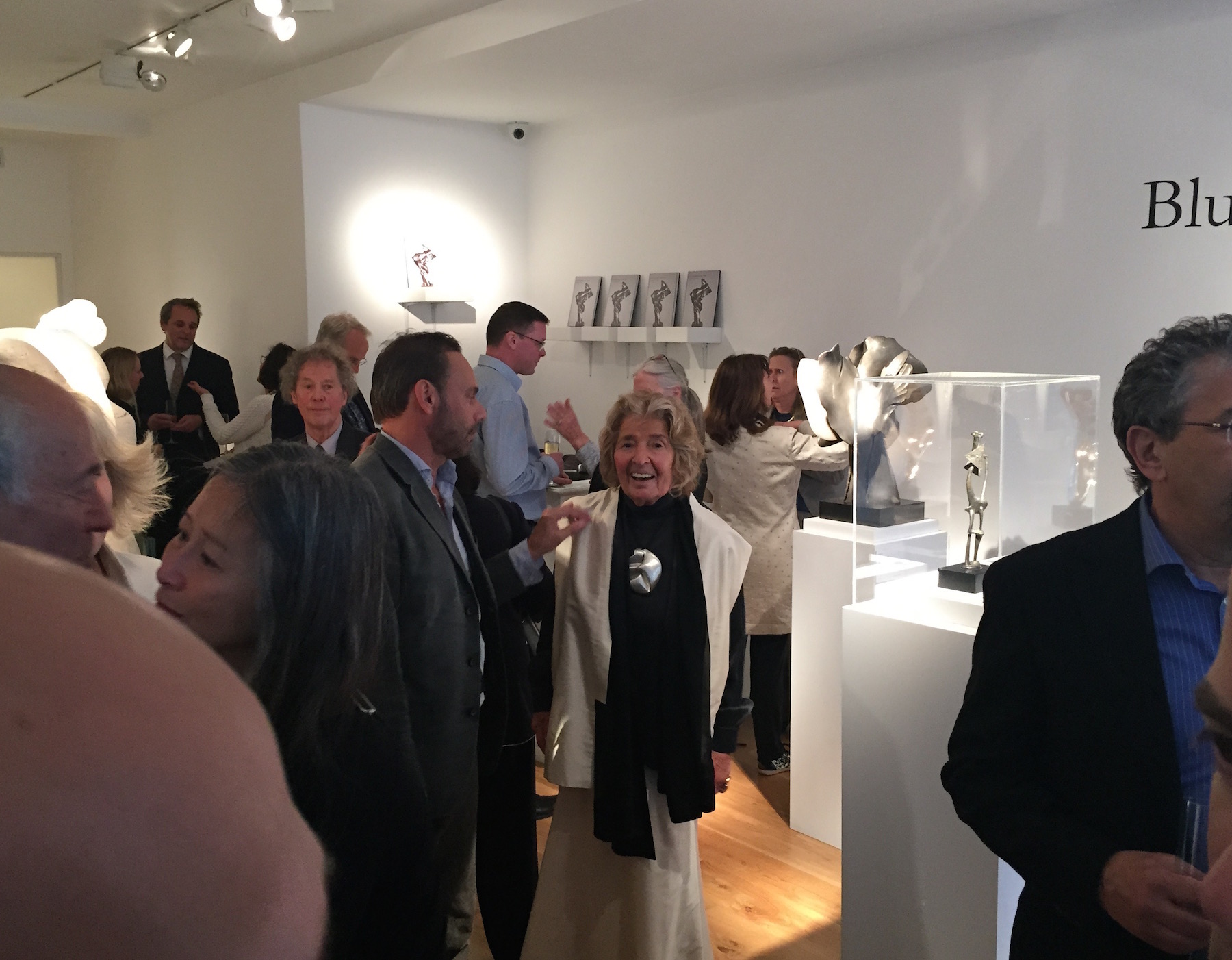 The Bowman show revealed Blumenfeld at the height of her powers — particularly her recent bronzes — while also presenting her as the heir to Moore’s “great tradition” of marble carving. Her Seascape (below) in Roman Travertine marble, 1985, provided a fitting centerpiece to the exhibition. Image Auction Central News. 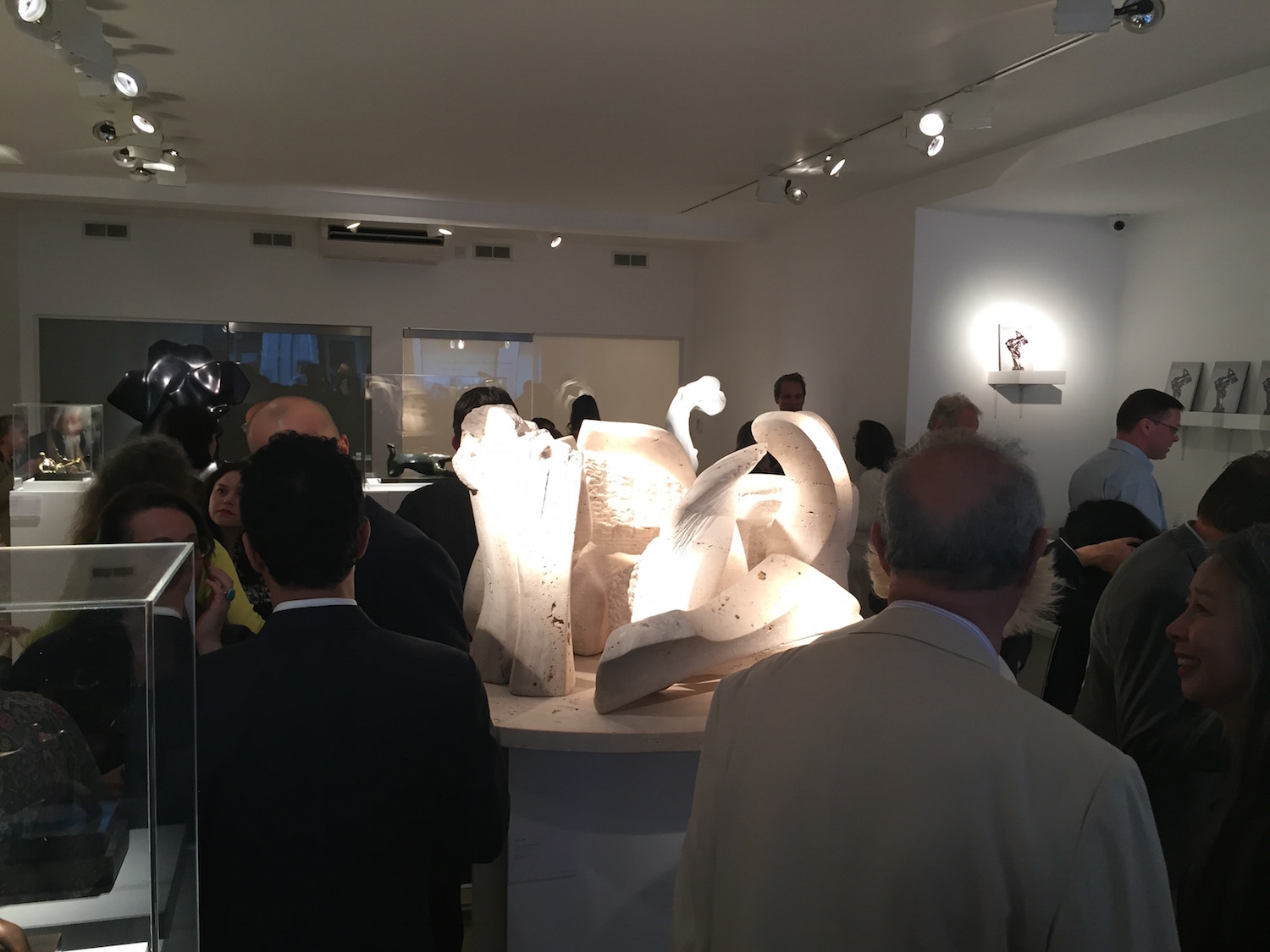 Most artists seeking to make or consolidate their international reputations look to London as the ideal environment in which to show their work. This is, after all, where the rich like to shop. Writing in The Guardian recently, author John Lanchester presented an inventory of things that typically feature on the shopping list of the city’s super-rich. It included a Russian sable coat ($240,000); a facelift ($18,500), a thoroughbred yearling racehorse ($319,340), a Sikorsky helicopter ($14.8 million), and “an arrangement of flowers changed weekly for six rooms at $98,100.” Hard to believe that for the cost of one Giacometti sculpture you could buy a squadron of 10 Sikorsky helicopters.

One artist who has definitely set her sights on London is the Greek-born sculptor Sophia Vari. Vari already has homes in Monaco, Colombia, Italy and New York (she is married to the Colombian sculptor Fernando Botero), but clearly she has decided it is time to conquer London.

Last year saw the opening of a new gallery, ContiniArtUK, in Mayfair (where else?) and it is here, from June 12 to Aug. 30, that Vari will show a selection of her recent abstract sculptures in marble, bronze and gilded bronze, in an exhibition titled “Le Désir de la Forme.” The exhibition includes Tête Solaire. Image courtesy ContiniArtUk. 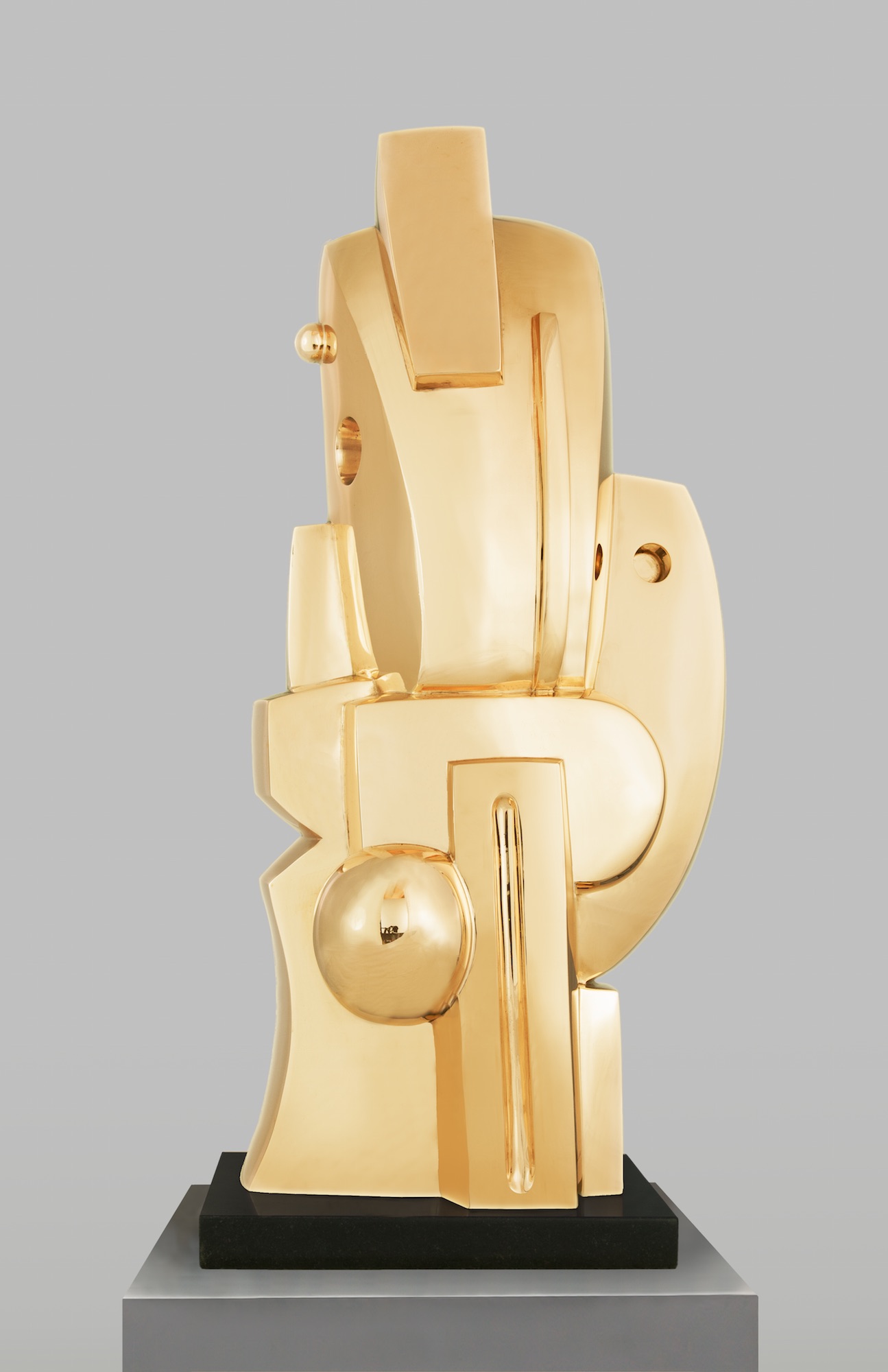 Some of Vari’s works have a chunky, assertive quality and seem to have drawn on the tradition of inter-war modernism while also having some affinities with the work of the late Spanish sculptor Eduardo Chillida.

This work in bronze, by Vari, titled Douce Intimitée, is included in a solo show of her sculptures. Image courtesy ContiniArtUk. 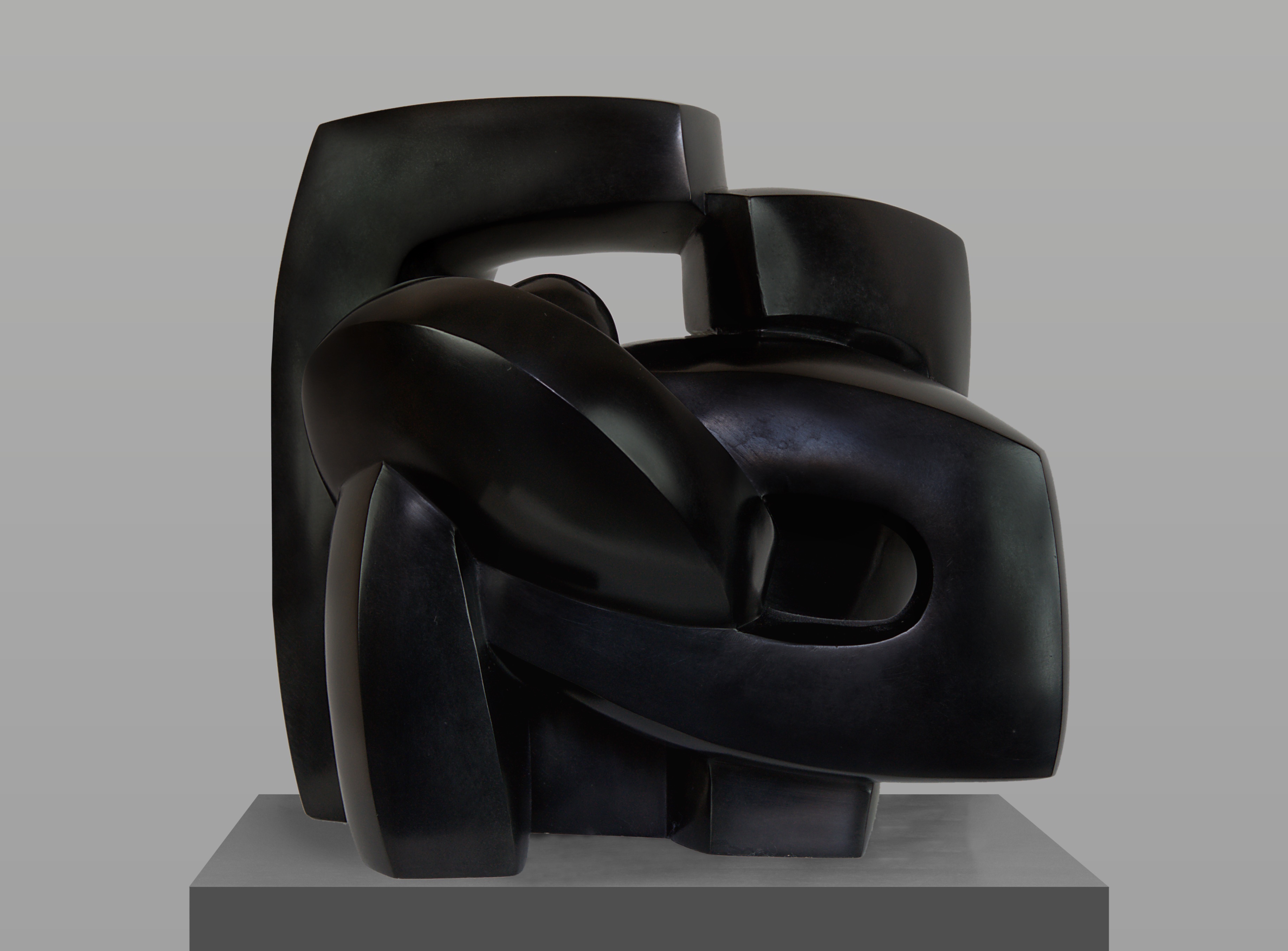 Art lovers visiting London this summer will be shocked and saddened at what has been allowed to happen to Cork Street, one of the capital’s most famous and longest-established concentrations of prestigious galleries.

Cork Street is steadily being gutted and transformed into another center for high-rent offices and luxury shopping. Image Auction Central News. 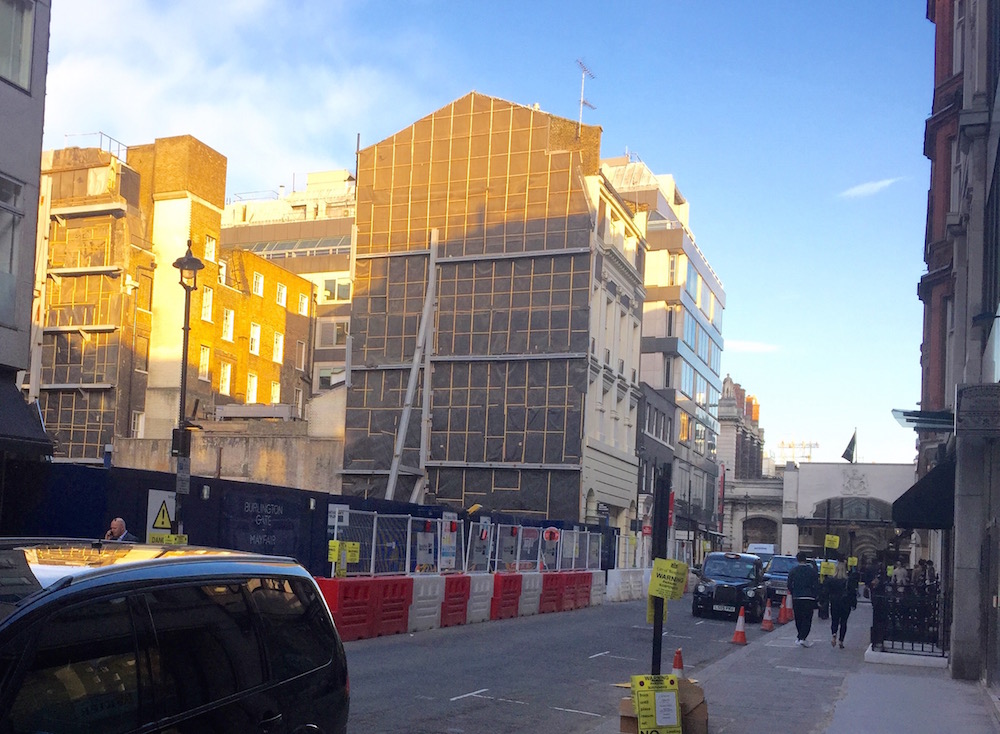 Many have been turfed out, unable to pay the exorbitant rents demanded by landlords seeking to benefit from the insatiable demand for luxury brands among the super-rich. Today, Cork Street has been gutted and is dominated by tower cranes, busy transforming it into yet another location for the up-market fashion shops that dominate New Bond Street and environs.

New Bond Street, once a crucible of famous art galleries, is now dominated by the likes of Dior and Louis Vuitton. Image Auction Central News. 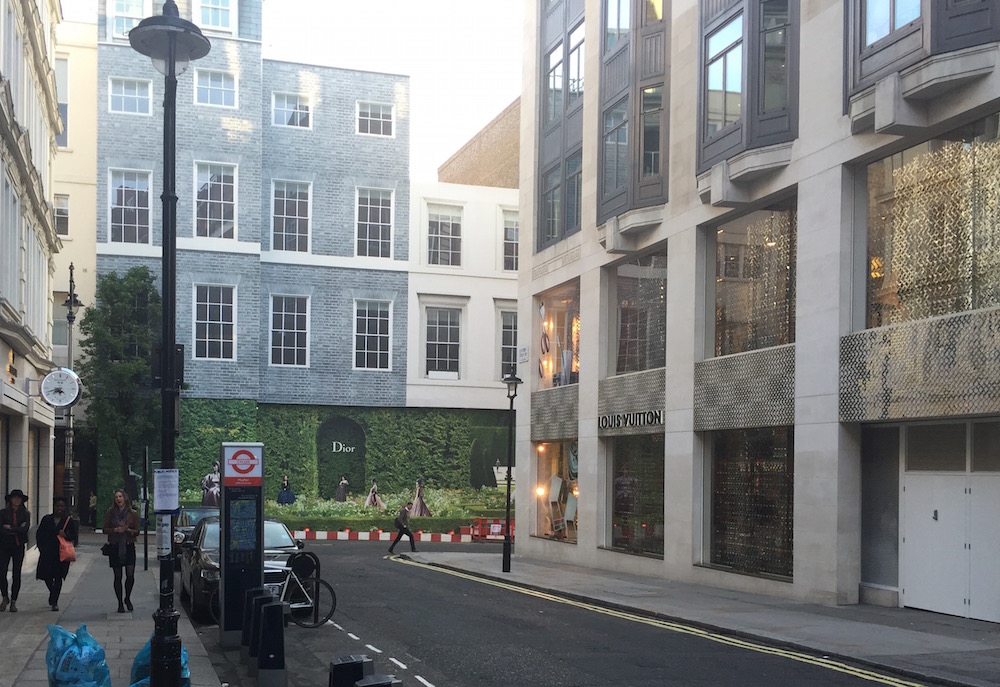 This kind of development may be having a positive impact on the art fair circuit, which is still booming, in the regions as well as in the capital.

Organizers of the annual Buxton Fair in Derbyshire in May told Auction Central News that “lots of furniture was sold,” including a superb oak sideboard made in Barnstaple offered by Steve Bentley Decorative Arts, priced at £3,500, while W.R.Harvey Antiques of Witney evidently completed their best deal for many years, selling three top-end Georgian pieces to an American client who flew into the UK especially to buy them for a figure in the region of £150,000 ($228,000). 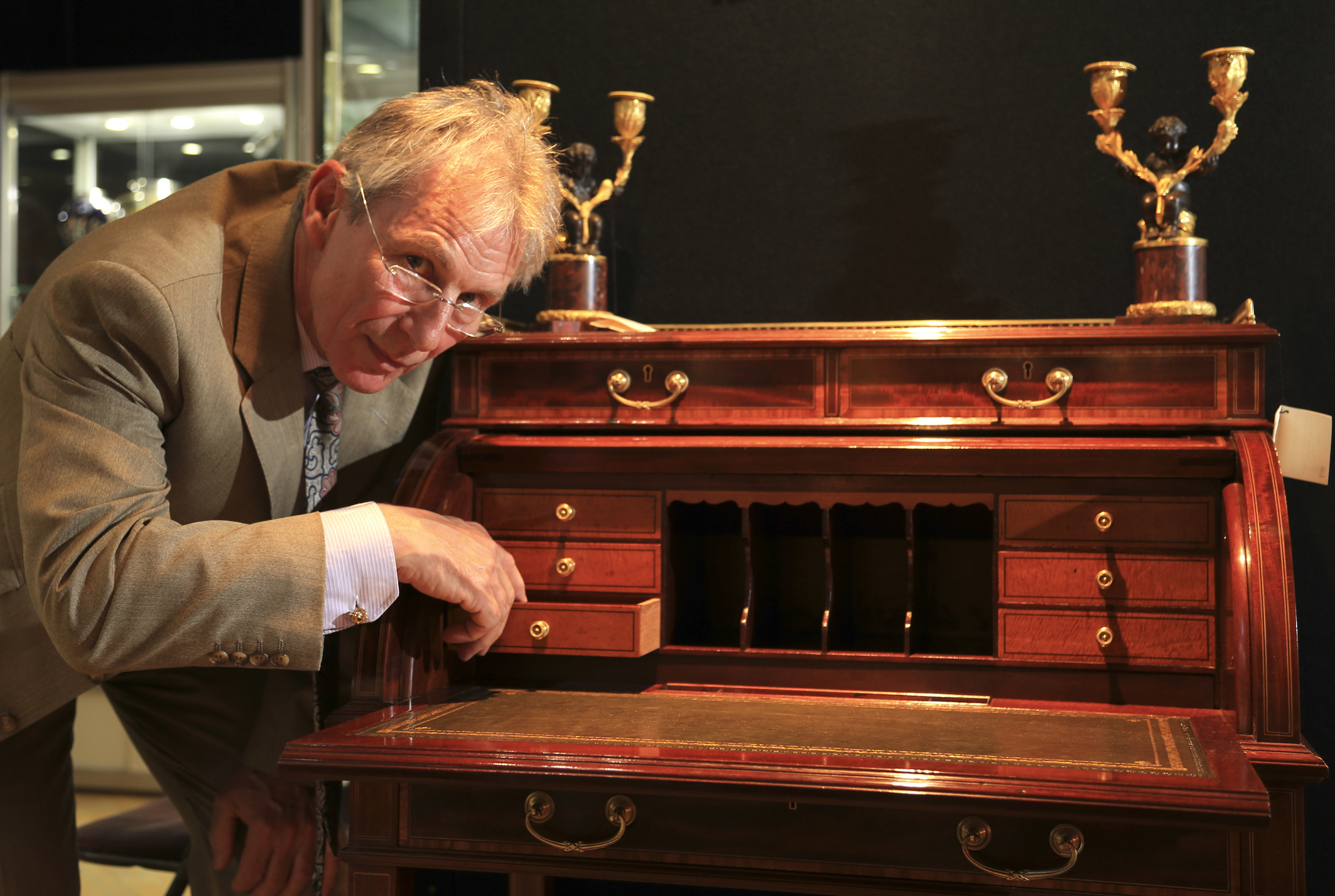 Here in London, June sees the opening of the Masterpiece Fair, London’s swankiest art and antiques event, held each year in the Royal Hospital Grounds in Chelsea. This year’s event runs from June 25 to July 1 and sculpture will figure prominently here too. London Modern British dealers Offer Waterman, for example, are looking to capitalize on the interest in Barbara Hepworth (1903-1975) that will surely be generated by the Tate’s major Hepworth exhibition opening on June 24 (until Oct. 25). They will be offering a fine Hepworth bronze entitled Reclining Form, Trewyn of 1959. Image courtesy Offer Waterman. 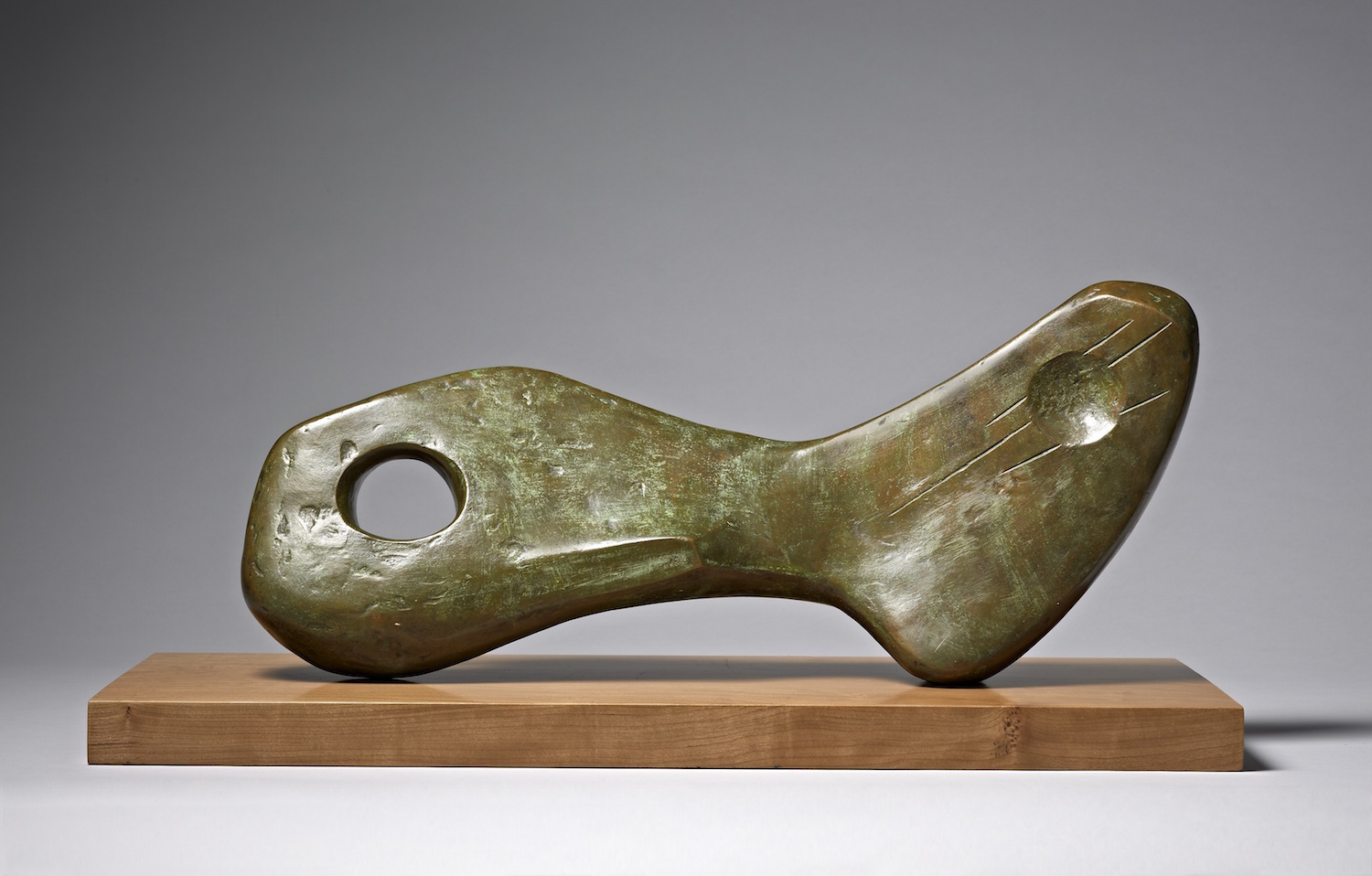 Elsewhere at the Masterpiece Fair some extraordinary clocks by the great 17th-century British maker Thomas Tompion will be on the stand of Winchester dealers Carter Marsh. The Medici Tompion, Grande Sonnerie table clock, circa 1698, was presented by William III as a gift to Cosimo de Medici. 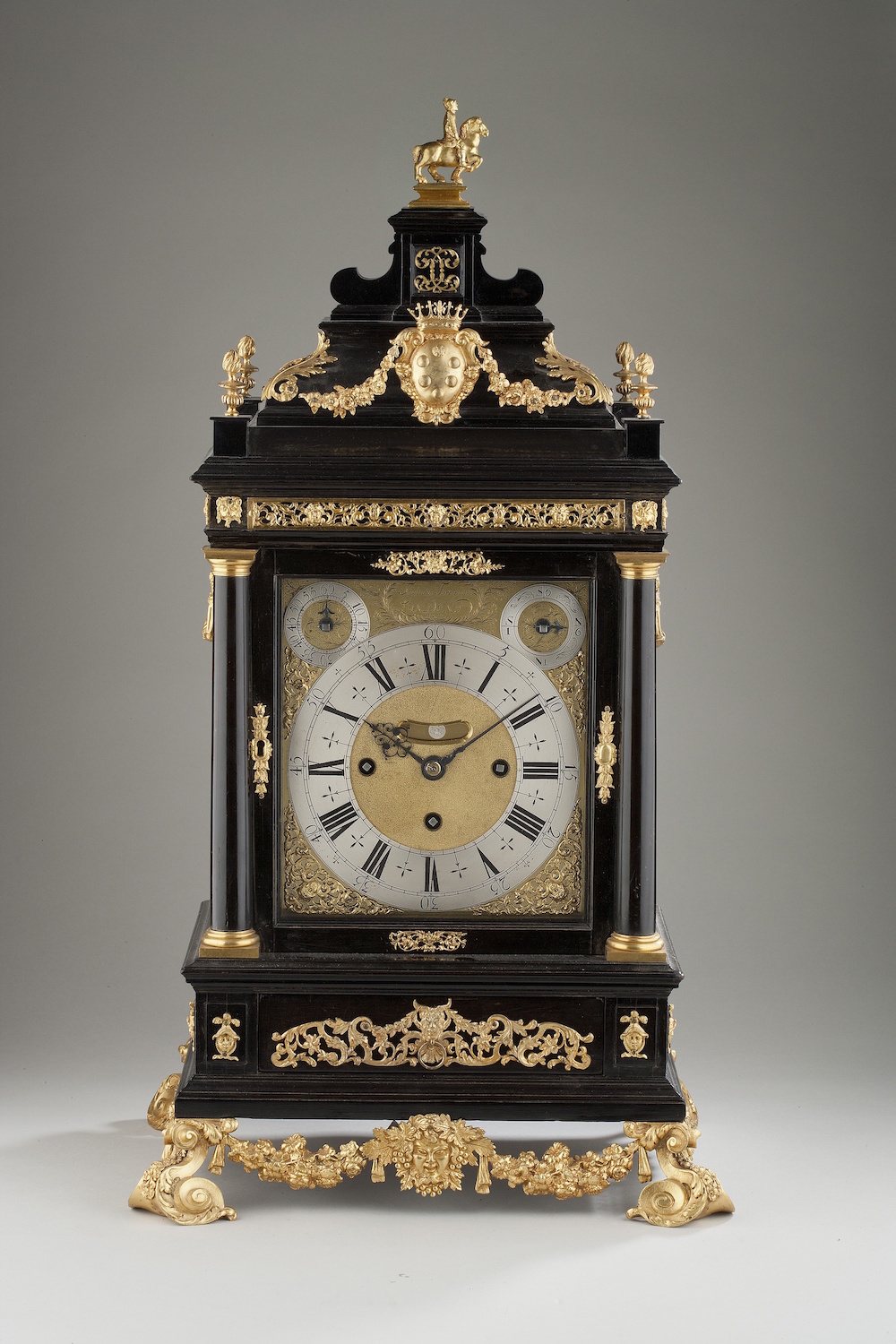 Provenance doesn’t get more prestigious than that. Our records show that the clock was last offered at the Grosvenor House Fair back in 2007 when Kent clock specialist Anthony Woodburn sold it to an English private collector for an undisclosed sum. It reappears at Masterpiece with a price tag of £4.5 million ($6.8 million).

Before Masterpiece opens, there is the June Olympia International Art and Antiques Fair to be slotted into the diary, running June 18-28. June.

A Regency mahogany long stool, circa 1820, will be on the stand of Anthony Fell at the June Olympia International Art & Antiques Fair. 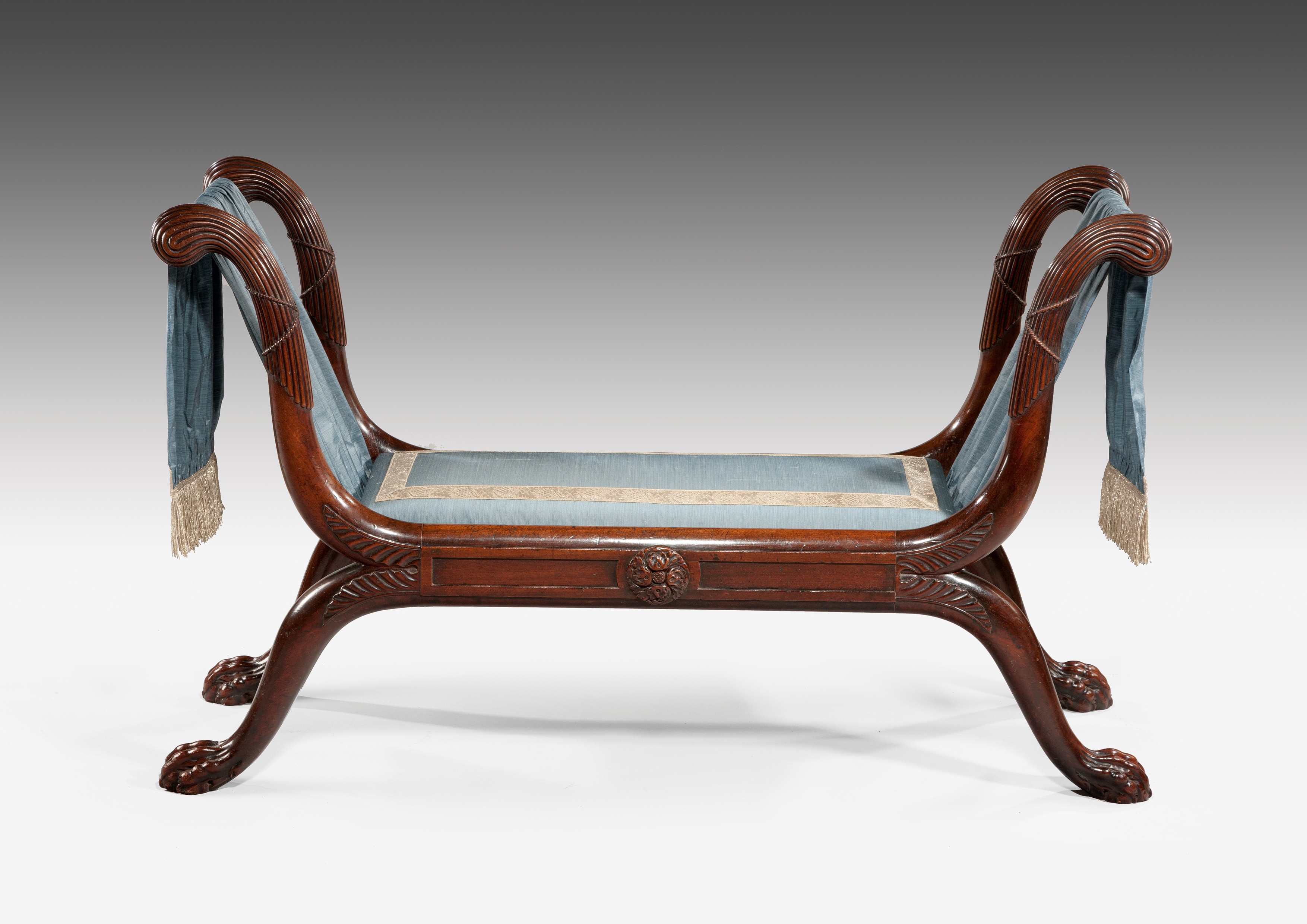 With so many fairs packed into the first half of the year, it is not surprising that London virtually closes down in August as the trade head for their holiday homes in the sun.

Finally, a brief mention for a terrific photography show opening this month at James Hyman Gallery in Savile Row. Hyman is celebrating the work of Raymond Cauchetier, whose photographs documented the New Wave of French cinema of the late 1950s and early 1960s, capturing iconic images of screen idols including Jean-Paul Belmondo and Jean Seberg on the set of A Bout de Souffle (Breathless) of 1960.

Belmondo and Seberg are pictured in a still photo by Cauchetier on the set of the 1960 film A Bout de Souffle. Copyright Raymond Cauchetier, courtesy James Hyman Gallery, London. 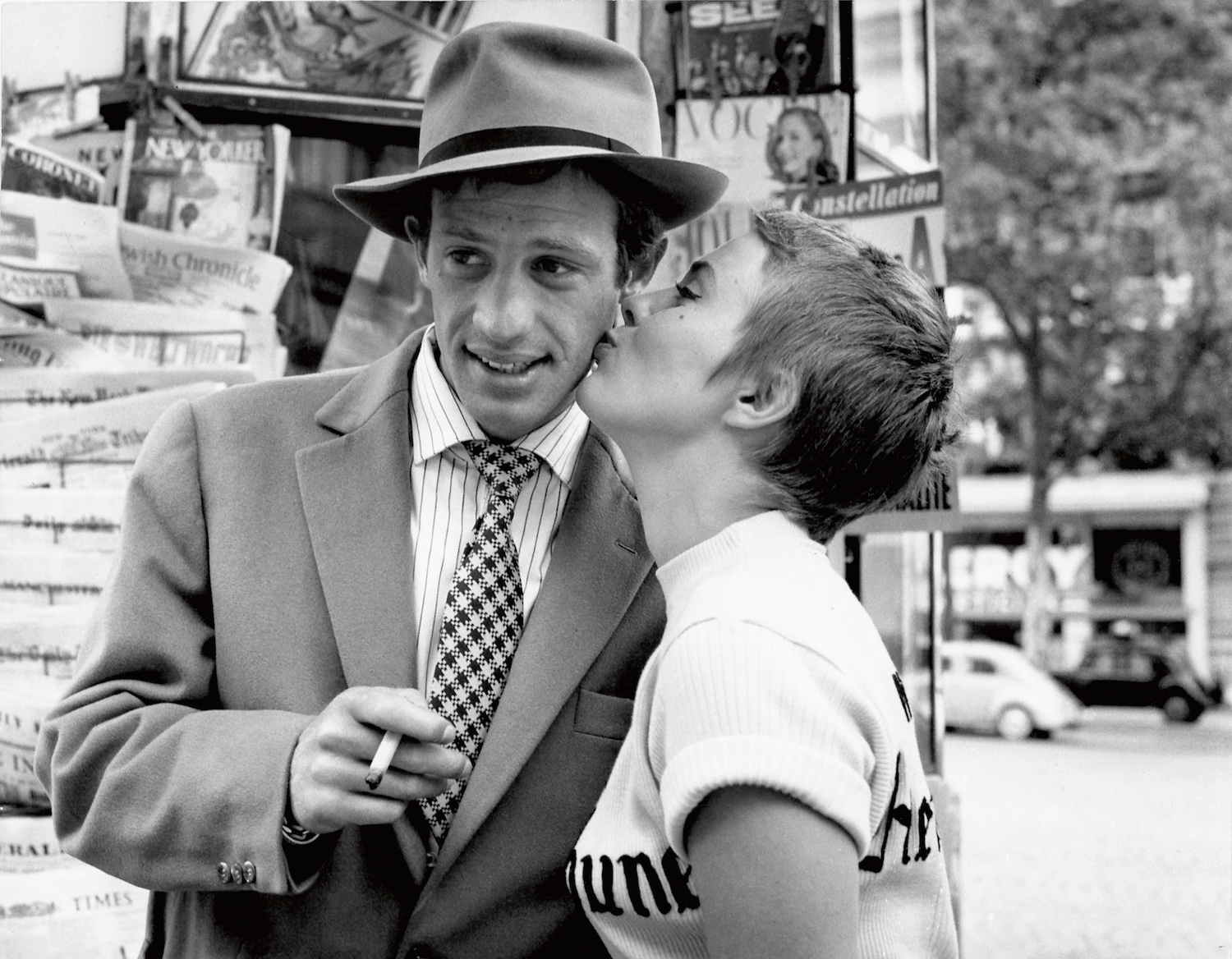 At the time, some thought “on-set” photographers should simply record the scene, but Cauchetier had a more creative instinct. As he explains, “Some regarded my photographs as intrusive, a betrayal of trade secrets, and a waste of time. Fortunately, with the passing of time, attitudes have changed and now these photos, finally rediscovered, are appreciated as enriching our understanding of these films.” The Hyman show seems certain to endorse that view.