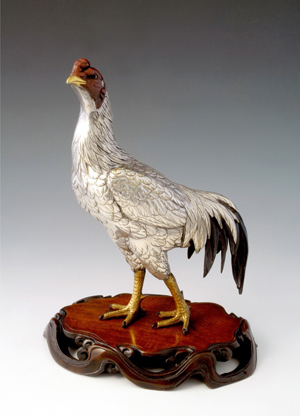 Among the works of art expected to be on sale at the inaugural Art Antiques London fair in Kensington Gardens in June will be this late Meiji period Japanese bronze cockerel with silvered body and details in shakudo and gilt, signed Shigemitsu, priced at £6,500 ($9,750) with Laura Bordignon. Image courtesy Houghton Fairs.

It was reported this week that London has relinquished its hallowed status as the world’s leading financial center, ceding that coveted title to New York. Quite how important or indeed enduring that shift will be in the longer term — particularly given the inexorable rise of China as a trading hub — remains to be seen.

The switch in economic power mirrors the rivalry between London and New York as the center of the world’s art market. Art has always followed the money, but the umbilical links between finance and art have become stronger and more visible than ever in recent years.

Interestingly, the introduction in the UK of Droit de suite, or the Artist’s Resale Rights Levy, had always been expected to bring about a tectonic shift in the balance of trade as New York hoovered up the transactions that would have occurred in London had it not been hamstrung by EU legislation. In the event, however, the Resale Rights Levy did not have the deleterious effect on London business that many predicted.

New York may be reasserting itself, but for an indication of the continuing health of the London art market, look no further than the art and antiques calendar for the next three or four months.

After a seemingly interminable winter, it seems that spring is about to arrive in the UK. Birds are returning to the garden, daffodils are making a heroic effort to bloom, and the next few weeks are chock-full of auctions, fairs and other trade events.

A tent-pole event in the spring-summer calendar will be the launch of Anna and Brian Haughton’s new London fair — Art Antiques London — scheduled for its inaugural outing June 9-16. This has effectively stepped into the vacuum created by the now defunct Grosvenor House Fair, which closed last year. For a while it appeared that a group of London dealers would throw their hats into the ring and create their own fair to replace Grosvenor House. But now the Haughtons’ effort looks likely to be the one to watch.

London Eye will cover this in more depth as June approaches, but for now suffice to say that the Haughtons have planned an interesting itinerary to coincide with the fair, including gala receptions, lectures and seminars by television personalities, a loan exhibition of Russian photographs in association with the London Friends of the Hermitage Museum, and a close relationship with the Victoria and Albert Museum. Elsewhere on this page we preview some of the prestigious works expected to be on offer in June. 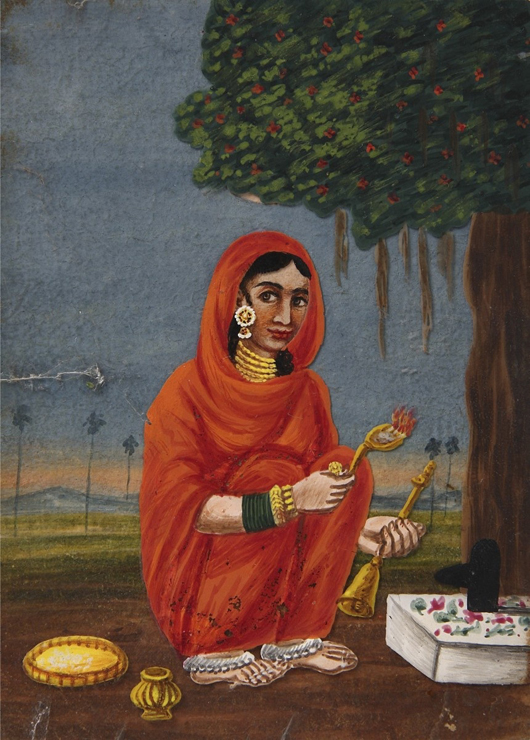 At the inaugural Art Antiques London fair slated to take place in Kensington Gardens in June, London dealers Finch and Co. will offer this unusual set of 27 Indian paintings on mica, circa 1850-70. Image courtesy Houghton Fairs. 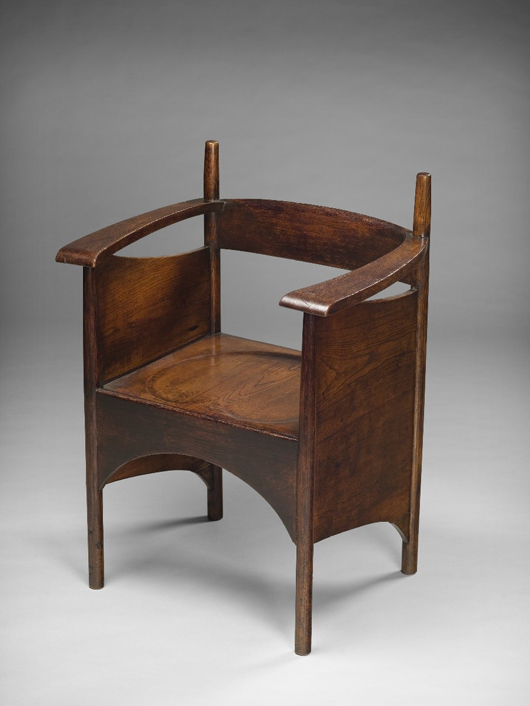 London dealers H. Blairman & Sons will be offering this oak armchair by Charles Rennie Macintosh, circa 1897, provenanced to the Argyle Tea Rooms in Glasgow when they exhibit at the inaugural Art Antiques London fair in Kensington Gardens in June. Image courtesy Houghton Fairs.

Meanwhile, one of the more interesting auctions coming up in the next month is a sale at Christie’s South Kensington rooms in April of property from the eclectic collection of society landscape gardeners and interior decorators Isabel and Julian Bannerman. Christie’s informs us that the Bannerman aesthetic “evokes the Golden Age of ‘Unwrecked England,'” although quite what this is referring to is unclear. Perhaps it is intended as a subtle endorsement of the Conservative Party’s election campaign, the advertising for which seems preoccupied with the idea of “Broken Britain.”

Be that as it may, the immediate economic aim of the sale is to raise the £400,000 ($602,100) required to develop the Bannermans’ award-winning Hanham Court Garden at a medieval abbey situated between Bath and Bristol. The sale, entitled ‘Hanham Court: A Pastoral Idyll,’ takes place at Christie’s South Kensington on April 14 and comprises around 300 lots with estimates ranging from an accessible £300-£30,000 ($450-$45,148).

Turning to the London circuit, one of the main emphases at this month’s Chelsea Antiques Fair at Chelsea Old Town Hall on March 17-21 will be a focus on designer ceramics. Among the rare delights on offer at the fair will be a pottery cat spill vase by the foremost feline potter of his generation, the inimitable Louis Wain (1860-1939). Standing 12 inches tall, and entitled Futurist Cat, the vase was made in England by Max Emmanuel, circa 1914, and is signed by Wain on its base. Offered by London and Lyndhurst Art Deco ceramics specialists Gazelles, who describe it as “extremely rare,” the vase is priced at £8,800 ($13,250). 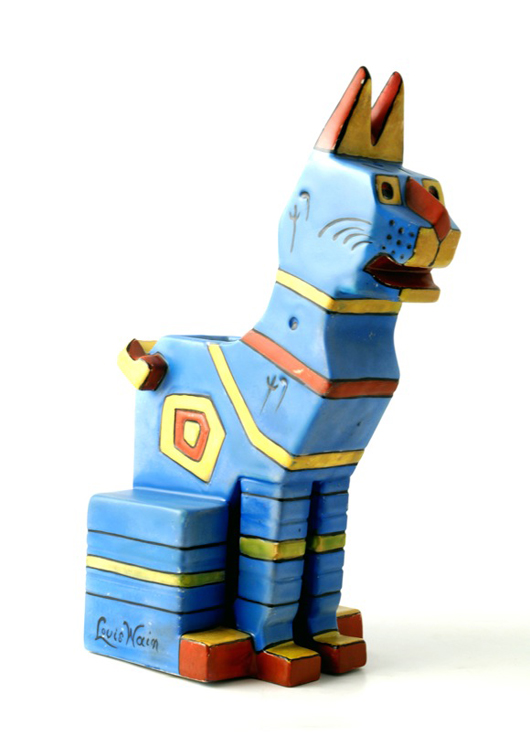 This ‘Futurist Cat’ spill vase by Louis Wain will be offered by Gazelles at the Chelsea Antiques Fair at Chelsea Old Town Hall, March 17-21, priced at £8,800 ($13,250). Image courtesy Penman Fairs.

Gazelles are also offering two rare pieces by Art Deco designer Clarice Cliff, the appeal of whose work seems to endure across generations. The items relate to Cliff’s collaborations with artist Dame Laura Knight (1877-1970) who was commissioned by Wilkinson’s to produce designs for Clarice’s now famous Circus dinner, tea and coffee service. Gazelles will be offering a plate (originally from a 12-piece service made in 1934 for the Paris Exhibition of 1935), priced at £880 ($1,325), and a coffeepot priced at £3,800 ($5,719). 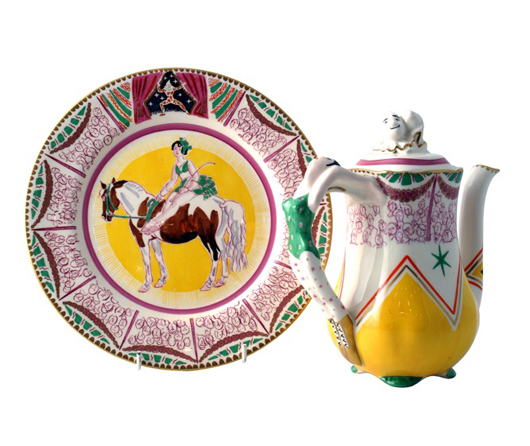 The organizers of the forthcoming April instalment of the Spring Decorative Antiques and Textiles Fair to be held April 20-25 in the Marquee in London’s Battersea Park insist that the event is “immune to the whims of fashion or fad.” Doubtless they will hoping the April event proves as immune to the adverse economic climate, although thus far these Battersea Park events (including the Affordable Art Fair, which is also held in the Marquee) do seem to have surfed above the tides of recession. Perhaps it’s the combination of lawns, woodland and water surrounding the Marquee that puts visitors into a relaxed frame of mind for the fair. Unlike other antiques fairs, many of which seem to be rather straight-laced, this event communicates a certain relaxed ambience. It also promotes the innovative juxtaposition of objects that serves as a stimulus to creativity for visitors looking for ways to make their own interiors more interesting and individual. Expect to see big clocks, strange painted furniture, dilapidated garden statuary and curious architectural fixtures and fittings arranged in startling conjunctions. 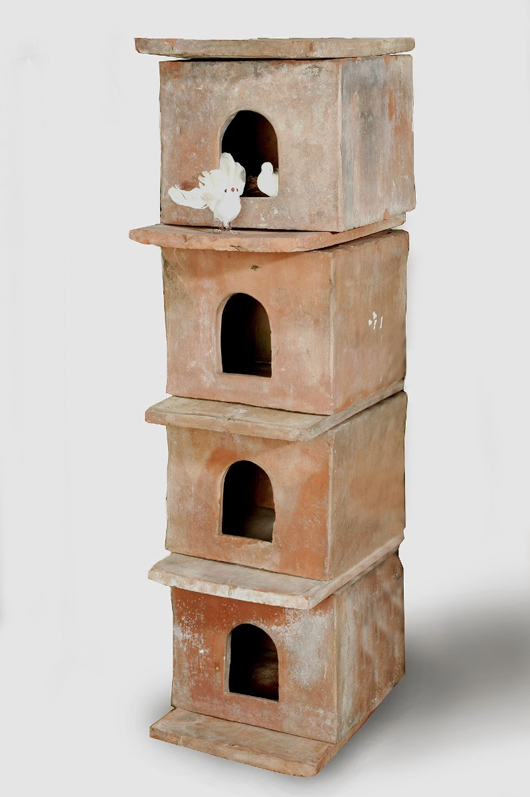 A group of late 19th-century English terracotta dove cotes to be shown at the Spring Decorative Antiques and Textiles Fair in Battersea Park from April 20-25, where the theme will be ‘A Garden Fantasy: Unusual Statuary & Decorative Objects for City & Country Spaces.’ 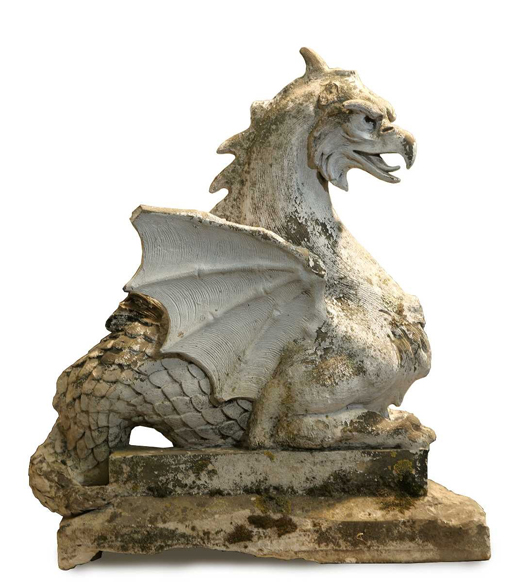 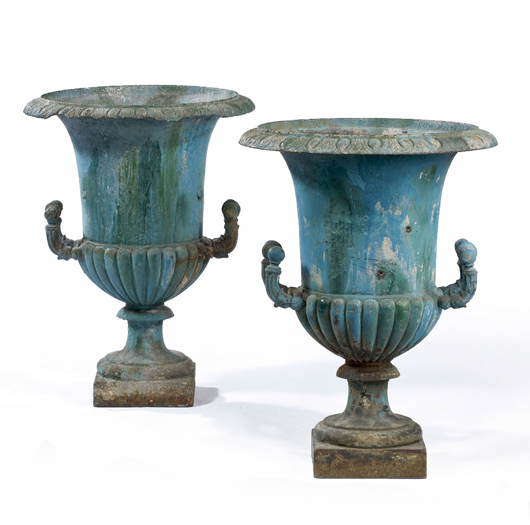 Finally, a word about a highly successful sale of Chinese material held by Duke’s the Dorchester auctioneers Feb. 11. Duke’s are another of those provincial firms that are only provincial by location. In terms of expertise they rival any of the London houses and frequently get prices that even London would struggle to achieve. More importantly, they get more than their fair share of the all-important consignments of important material. As the saying goes, you’ve got to be in to win.

If there is one commodity that is guaranteed to bring the serious bidders out of the woodwork at present it’s Chinese ceramics. Chinese collectors are among the most bullish bidders for fine examples of their ancient material heritage and whether the lots come up in Dorchester or Detroit you can be sure they’ll be competing, whether in the room, on the phone or via the Internet.

In February, Duke’s offered a magnificent Chinese lantern vase bearing two impressed characters and with the seal mark of Qianlong and of the period, 18 1/2 inches high Provenanced to Embley Park, Hampshire, the home of Florence Nightingale, and coming under the hammer with an exhaustive scholarly catalog entry, this superb example of imperial blue and white porcelain was eventually knocked down at a hammer price of £625,00 ($941,200). 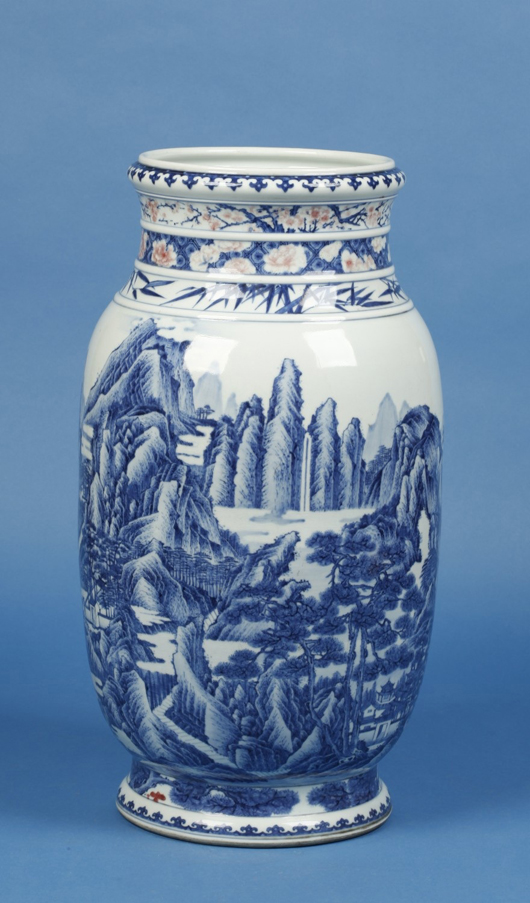 As it transpired, this was just one of many significant prices for Chinese works of art at Duke’s sale, offering a reminder if any were needed that the English countryside remains an extraordinary repository of museum-quality treasures. 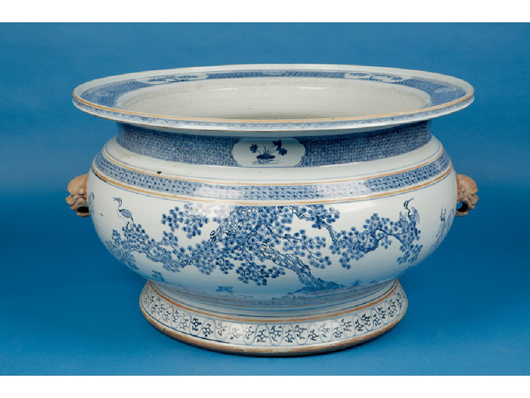