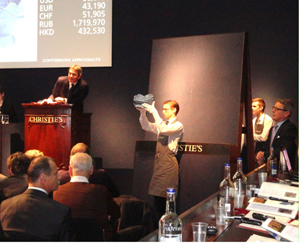 LONDON – Today, London is often jocularly referred to as Londongrad or Moscow-on-Thames on account of the estimated 300,000 Russians who now call London their home. Earlier this week it seemed a sizeable proportion of them were assembled at Christie’s and Sotheby’s for the sales of Russian works of art.

Not so very long ago, Russian art was a tiny corner of London saleroom activity. Sotheby’s and Christie’s auctions were almost exclusively attended by the trade, with perhaps twenty or thirty dealers — most of them British — rattling around a cavernous saleroom. How times have changed. At this week’s London sales of Russian art, both Christie’s and Sotheby’s salerooms were packed to the rafters and it was clear from the constant buzz of conversation that the vast majority were Russian.

Yet the works on sale this week were hardly the kind of thing that is often referred to as ‘affordable art’. Sotheby’s sale on 26 November raised £11.4 million ($18.3m) from just 28 lots, while earlier in the day Christie’s equivalent sale of important Russian art raised £15.1 million ($24.2m) for 254 lots. No fewer than six artist records were established at Sotheby’s.

Such high spending may seem extraordinary during a time of recession until one learns from Hermitage Capital Management that between 1998 and 2004, some $102 billion in capital is estimated to have left Russia. The UK’s ‘Non-Domicile’ tax system thus makes London a favourable place to stay for Russians with new-found wealth and clearly the fine art auction houses are indirect beneficiaries of that. Asked by Auction Central News why Sotheby’s don’t hold their Russian sales in Moscow, Mark Poltimore, Chairman of Sotheby’s Russian art department,

said, “Because if we did there is a chance that we would be pressured to engage in practices we do not find acceptable and there is still too much mafia activity there. But equally important is the fact that Russians love London. There is great wealth here and it is still a centre of the world art market. The Russians love coming here and love buying from us in London.”

Perhaps the clearest evidence of that was the competitive bidding battle that ensued over an exceptionally rare Portrait of Praskovia Anatolievna Mamontova by Valentin Alexandrovich Serov (1865-1911) who, alongside Ilya Repin, is Russia’s most celebrated portrait painter.

The mesmerising intensity of the sitter’s gaze and the daringly muted maroon palette were enough to send this to a premium-inclusive £1.2 million ($1.9m), double the upper estimate. “A fitting price for a great artist,” declared Lord Poltimore as he brought the hammer down on a new record for the artist.

While Serov’s brooding portrait perhaps enjoyed a premium on account of its small size, the same could not be said of Vasili Vasilievich Vereschagin’s (1842-1904) Transportation of the Wounded, an enormous, panoramic depiction of a train of covered wagons and walking wounded returning from the Russo-Turkish war of 1877-78.

Vereschagin, one of the most famous painters in the world in the late nineteenth century largely thanks to his war paintings, has become something of a star of the London Russian sales (Sotheby’s last outing saw over a million pounds change hands for the artist’s The Spy). On this occasion the hammer fell at £937,250 ($1.5m).

Finally, one other interesting lot at Sotheby’s was a dazzling canvas by the Georgian modernist painter Lado Davidovich Gudiashvili’s (1896-1925) entitled By the Black Stream, 1925.

This vibrantly coloured scene of a Modiglianiesque nude languishing by a river reflected the artist’s time among the Parisian avant garde and it quickly brought a new auction record for the artist at £937,250 ($1.5m).

Over at Christie’s earlier in the day, their European president Jussi Pylkkänen could be seen prowling behind the rostrum, keeping an eagle on the bidding. He too may have been marvelling at London’s still burgeoning market for Russian art. The most dramatic illustration of that was when the aptly seasonal The Coachman by Boris Kustodiev (1878-1927) came under the hammer.

The subject and mood of the painting — a bearded blue-clad figure standing in a winter landscape, beaming with pleasure as he raises his hat — seemed curiously at odds with the current gloomy state of the global economy. That may have explained its rapturous reception in a roomful of seemingly recession-proof Russians for it demolished an estimate of £1,500,000-2,000,000 to bring £4,409,250 million ($7,063,618) — from a private bidder.

Rather less surprising was the other high price of the paintings section, where Nicolai Fechin’s (1881-1955) conventionally impressionistic Portrait of Mademoiselle Podbelskaya of 1912

— a barometer of new Russian wealth if ever one were needed.

Away from the salerooms, the London trade are already preparing for the seasonal trade. At least that would seem to be the case judging from the inventory released by London dealers Mallett. The firm have just secured a new collection of furniture and works of art which include one or two unusual objects. It is always a challenge to find makers’ names for highly individual creations but Mallett seem confident of the authorship of a pair of Sri Lankan carved ebony octagonal occasional tables, circa 1870, decorated with radiating veneers of specimen native woods. 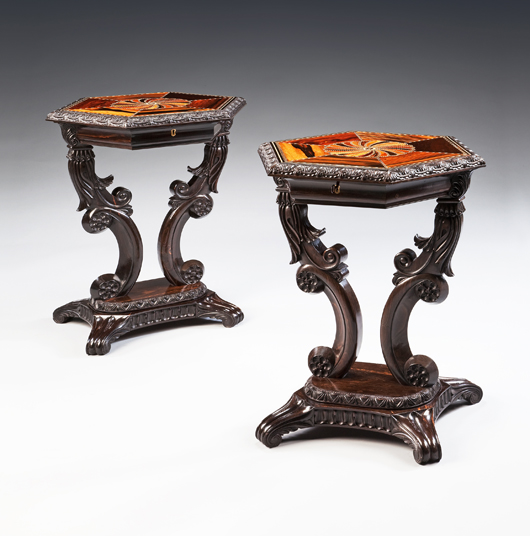 These are being linked to the name of Andres da Costa on account of their similarity to a breakfast table sold at Sotheby’s in Chester in 1987. This underscores the value of the sales archive in attributing unsigned furniture. Mallett are looking for around £46,000 for these.

While the occasional tables are intriguing, arguably even more fascinating is a rare mid-nineteenth century cigar cutter with the words ‘Souvenir des Îles de Salut’ engraved on the top plate. 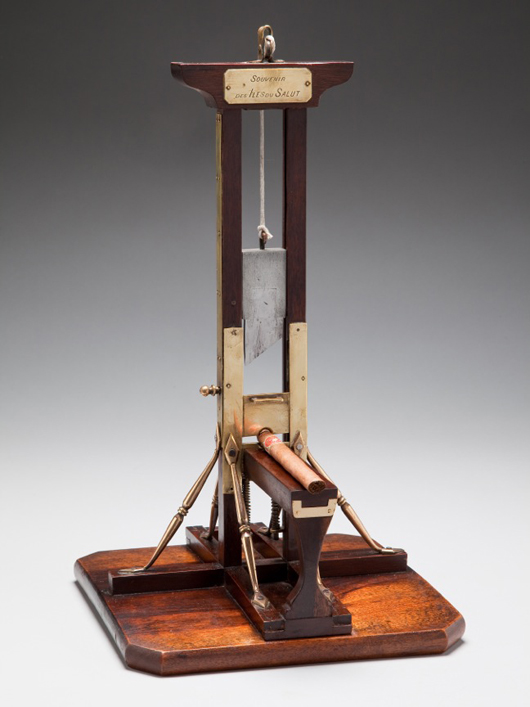 This refers to the Salvation Islands off the coast of French Guyana, a notoriously brutal penal colony in the mid-nineteenth century, which was made famous in Henri Charrière’s novel Papillon, and later in the eponymous movie starring Steve McQueen and Dustin Hoffman. Was this grisly gadget a fixture of a cigar-smoking prison governor’s desk? A ‘snip’ at £9,500, but you’ll need to keep your fingers out of the way.

Mallett’s boarded-up former premises opposite Sotheby’s in New Bond Street look very forlorn now that the business has moved to the elegant Ely House in Dover Street in nearby Mayfair. The firm were understandably irritated at the steady encroachment by luxury handbag and clothing companies into a district that had been a centre of the art trade since the 1870s. Nearby Cork Street, another historic art street, is also threatened by the advancing up-market rag-trade which goes from strength to strength thanks to the influx of new wealth into London in recent decades.

London’s famous Cork Street, where dealers on the West side of the street (right) now seem relatively secure, while the East side remains under threat by property developers keen to develop the site, albeit at the expense of the art trade. Image Auction Central News.

London Eye spoke to some Cork Street dealers this week and while those on the right (or West) side of the street now feel relatively secure for the next three years, the opposite (East) side remains under threat from property developers looking to develop the site.

The times they are a-changing in Londongrad.

Finally, a very brief mention to a major new exhibition of paintings by Lincoln Seligman entitled ‘An Artist at Large’ will be on view at La Galleria, Pall Mall, from 3–8 December, featuring works recording the artist’s travels during the past three years. Seligman has criss-crossed the globe during that period, covering more than 200,000 miles over four continents, armed with sketch pad, brushes and camera. The remarkable images he has captured from Tuscan hill villages to Indian palaces, from the shores of Africa to the plains of the American west might make nice surprise Christmas presents for those who have, well, almost everything. 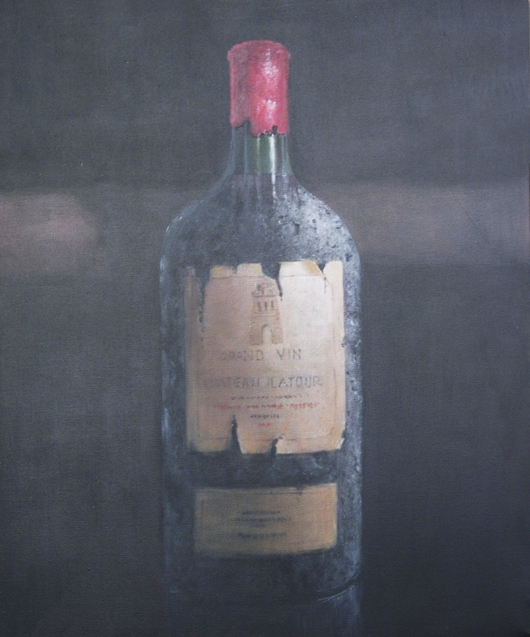 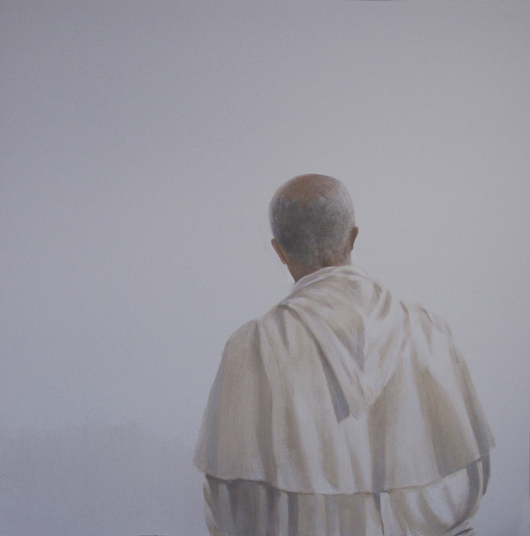 Monk at Sant’Antimo Abbey, Montalcino, Acrylic on canvas, by Lincoln Seligman, in the exhibition ‘An Artist at Large’ at la Galleria, Pall Mall from 3 to 8 December. Image courtesy La Galleria and Lincoln Seligman.