Auction Central News was among the hundreds of collectors and international museum curators strolling the aisles of the European Fine Art Fair (TEFAF) in Maastricht in March. Despite what many exhibitors described as a rather low-key atmosphere this year, most of the dealers we spoke to confirmed that a good deal of business was being done.

Many dealers do a significant amount of their annual turnover during the two weeks of the Maastricht event, so it is not surprising that no expense is spared in term of presentation. Of course, not all deals are signed and sealed during the fortnight of the fair, for many transactions are completed in the days and weeks after the event closes. 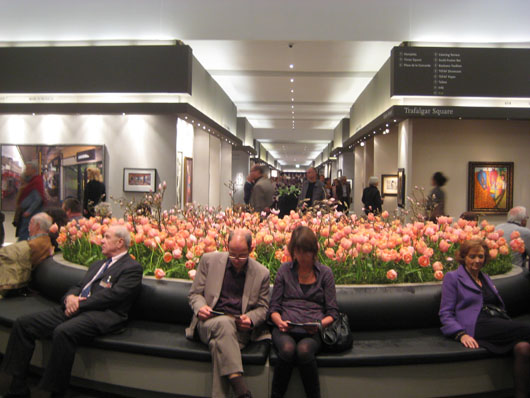 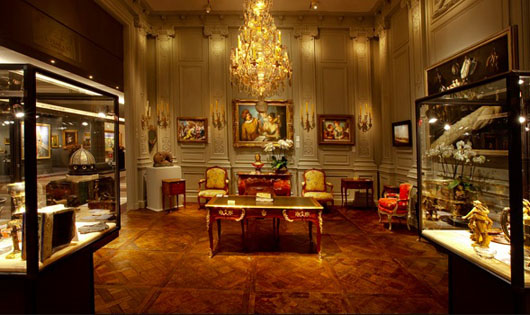 Exhibitors at the European Fine Art Fair in Maastricht spare no expense in decorating their stands at the year’s most prestigious art and antiques fair. Image courtesy TEFA, Maastricht.

However, the whispered word on trade lips this year concerned plans being mooted to turn TEFAF into a FreePort in order to avoid the increasingly onerous tax obligations that many feel are are militating against healthy business. Were it to go ahead, the FreePort would effectively make the fair a duty-free zone by exonerating from taxes those artworks coming into Maastricht so long as they are exported from Europe afterwards. Similar initiatives are already in place in Singapore, and Paris is now planning to establish a FreePort on an island in the Seine as a way to reinvigorate its declining art market.

Among the notable sales at this year’s TEFAF event was an early olivewood sculpture dating from 1945 by the Spanish artist Joàn Miró entitled L’Oiseau Lunaire Canadian gallery Landau Fine Art sold the work for $5 million during the opening hours of the fair, which is the sort of encouraging start most dealers dream of.

The Maastricht fair was originally devoted mainly to Old Master paintings and it remains one of the few fairs in the world where you can see true museum-quality works in that category. This year, Noortman Master Paintings of Amsterdam cemented their reputation as one of the leading dealerships in their field by selling three important Dutch Old Masters, including Gerrit Berckheyde’s 1671 View of Haarlem, which had carried an asking price of €4.5 million ($6.4 million), Willem Claesz Heda’s Still Life with Silver Tazza and a Roemer priced at around €3 million ($4.2 million) and Ferry boat with the River Vecht by Salomon van Ruysdael at €2.5 million ($3.56 million). Another Old Master dealer, David Koetser of Zurich, found a private collector for Willem van de Velde the Younger’s A States Yacht and Other Vessels in Light Air, which had an asking price of €3 million ($4.2 million).

In the contemporary section Axel Vervoordt sold a striking example of the work of Ghanaian contemporary artist El Anatsui, entitled Flag for a New World Power. When we visited the stand, this huge wall hanging, constructed from recycled beer bottle tops, was attracting hordes of admirers snapping away with their digital cameras. It was eventually sold for around € 600,000 ($857,000).

Elsewhere at the fair, London sculpture specialist Robert Bowman endorsed his status as one of London’s most scholarly and resourceful dealers in 19th century, modern and contemporary European sculpture by selling a rare lifetime bronze cast of Man with a Broken Nose by Auguste Rodin to a private collector for €180,000 ($293,000).

‘Man with a Broken Nose,’ a rare lifetime cast of the famous work by Auguste Rodin, which London sculpture dealer Robert Bowman sold for £180,000 ($293,000) at the TEFAF, Maastricht in March. Image courtesy of Robert Bowman Limited and TEFAF.

A newcomer to this year’s fair was Crispian Riley-Smith, the Yorkshire-based dealer in Old Master drawings. The highlight of his stand was an exquisite, circular drawing in pen, brown ink and blue wash, an emblematic device entitled An Allegory of Faith, circa 1590, 3 3/8 in diameter (88 mm) by the Netherlandish artist Crispijn van de Passe I (1564-1637). Related to a series of drawings now in the collection of the Duke of Devonshire, this exciting rediscovery was priced around €40,000 ($57,000).

And so from Holland to London. Now that the once great Grosvenor House Fair has been consigned to the history books, London’s closest equivalent to the European Fine Art Fair is the Masterpiece fair, which was inaugurated last summer. This year’s event, running from June 30 to July 5, will once again be held in the south grounds of the Royal Hospital Chelsea, a district gaining ever more art world prestige now that it hosts not only the popular Saatchi Gallery but also the annual British Antique Dealers Association art and antiques fair.

Like the Maastricht event, exhibitors at Masterpiece are increasingly aiming to satisfy the eclectic tastes of today’s High Net Worth collectors, many of whom like to mix the venerably ancient with the cutting-edge contemporary. Nowhere is this illustrated more clearly than in the approach of London dealers Berheimer Colnaghi, who will be taking to this year’s fair classic Old Master paintings by the likes of Panini as well as contemporary photographs by master practitioners such as Jeanloup Sieff.

Giovanni Paolo Panini (1691-1765), ‘Architectural Capriccio with Figures discoursing among Roman Ruins,’ 1730, oil on canvas, to be exhibited by Bernheimer Colnaghi at the forthcoming Masterpiece fair in London from June 30 to July 5. Image courtesy Bernheimer Colnaghi.

With London very much on the map at present thanks to this month’s royal wedding, it’s likely that this year’s Masterpiece fair will once again attract its usual crop of film stars and rock ‘n’ roll royalty such as Sir Mick Jagger, who attended last year’s debut event.

It’s not only the big blockbuster fairs and museums that are making the Chelsea and South Kensington districts one of Europe’s most salubrious places to view and buy art. There is also a host of smaller galleries tucked away in the villagey backstreets that offer fine quality painting and sculpture at more modest price levels.

One such gallery is the cosy and inviting Cricket Fine Art at 2, Park Walk, Chelsea. From June 14-24, Cricket will be showing “Pictures Within Pictures,” an exhibition of new paintings by American-born, Tuscany-based painter Janet Stayton.

Stayton’s new series of canvases combine motifs drawn from classical architectural ruins, the melancholy mood of Claudean landscapes, and a passion for still life painting inspired by Matisse and the Fauves. She has developed an innovative way of combining oil with sgraffito-like incised marks in stucco that lend her vibrant compositions some of the ambience of ancient fresco. After a seemingly interminable London winter of bitter cold and leaden skies, Stayton’s luscious new paintings promise to kick-start the summer with some invigorating Mediterranean light and much-needed joie de vivre. Prices range from £1,000 to £15,000 ($1,625 to $24,400). 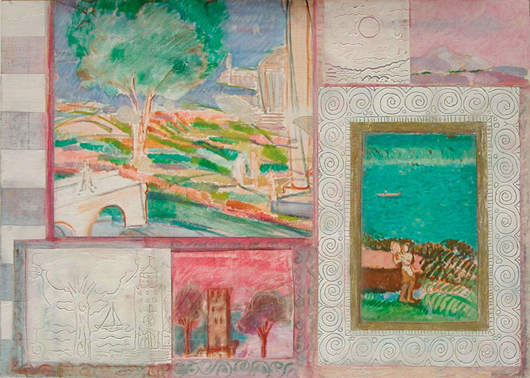 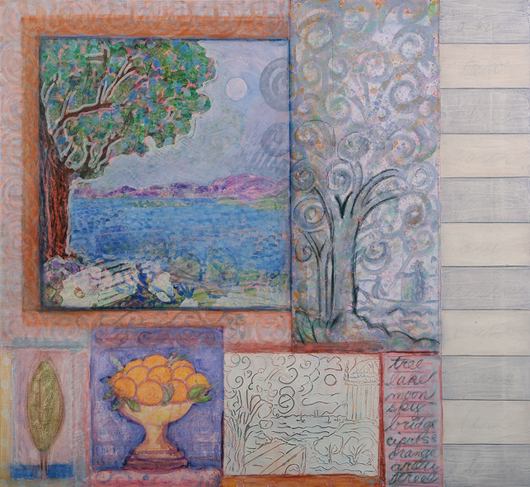 The Fine Art Society remains one of the most respected fine and decorative art dealerships in London, having established its international reputation through decades of prestigious and brilliantly researched exhibitions. The company continues that tradition this summer with a show that celebrates the centenary of the founding of the Camden Town Group in 1911.

Led by Walter Richard Sickert, the group, which included painters Spencer Gore, Harold Gilman, Charles Ginner and Robert Bevan, rose to prominence in the years leading up to the First World War by focussing on quintessentially English interpretations of everyday life. Few pictures better encapsulate the Camden Town aesthetic than Sickert’s famous Ennui, depicting two figures sharing each other’s wordless company in the fug of a domestic interior. This forthcoming show will unveil many lesser known works such as Sickert’s Granby Street and Clare Atwood’s View of Prince’s Gate, 1904,.

Revered by School of London artists Lucien Freud, Frank Auerbach and Leon Kossoff, the Camden Town Group continues to exert a powerful influence on British artists of every age and inclination. The exhibition at the Fine Art Society’s gallery at 14 New Bond St. runs from June 15 to July 14.