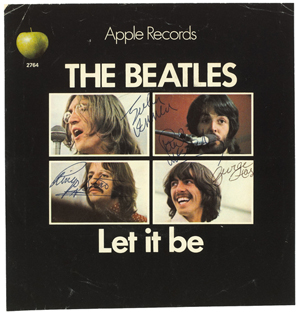 Dublin auctioneers Whyte’s rock and pop memorabilia sale saw €4,300 ($5,600) change hands for this set of Beatles signatures on the cover of their 1970 hit single ‘Let It Be.’ Image courtesy of Whyte’s.

LONDON – “Damn. Get that on the radio and they’ll run us out of town.”

The poetic words of rock ’n’ roll session-man Bill Black after recording That’s All Right with Elvis Presley at Sun Studios in Memphis in July 1954. At Whytes auction house in Dublin recently it was more a case of “Get that under the hammer and the buyers will run into town” because the acetate of that landmark recording—Elvis’ first commercial release—was the star of Whytes’ groundbreaking rock and pop memorabilia sale where it realized a hammer price of €65,000 ($84,800). 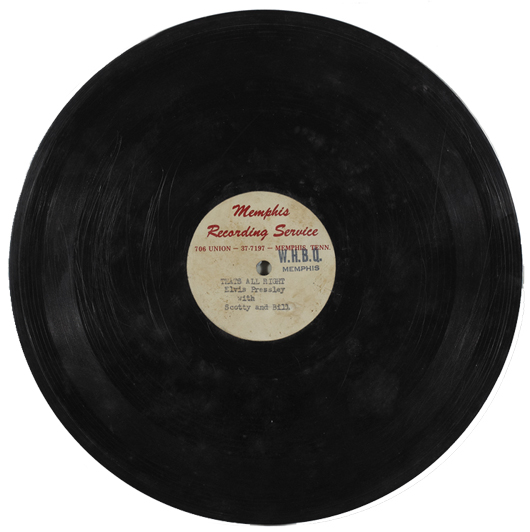 This rare acetate of ‘That’s All Right’ recorded by Elvis Presley at Sun Studios in Memphis in July 1954 was the star of Whytes’ recent rock and pop memorabilia sale in Dublin where it made €65,000 ($84,800). Image courtesy of Whyte’s. 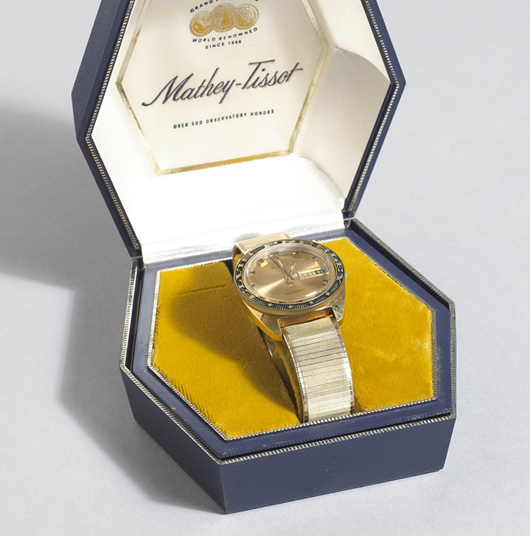 Rock and pop memorabilia is a long-established category in the UK auction arena. Not only does it help to broaden an auction house’s public profile, it can also introduce a younger clientele to the pleasure of auctions. The trick, of course, is to assemble enough prestigious material to bring in the buyers and focus media attention. Whytes’ sale was Ireland’s first ever auction of rock and pop material. Its success was due in no small measure to the inclusion not only of that rare relic of early Elvis recording history but to a decent tranche of Beatles collectibles too. The most keenly contested of the Fab Four lots was a cover of the 1970 hit single Let It Be, signed in ballpoint pen by all four members of the band, which realized €4,300 ($5,600).

Coincidentally, Beatles signatures also appeared this month at sales held by Cirencester auctioneers Moore Allen and Innocent and at Duke’s auction rooms in Dorchester. Moore Allen’s signatures featured in an album containing signatures by a host of other stars too, including The Rolling Stones, Roy Orbison, Orson Welles and Bing Crosby which together realized £3,800 ($5,890) while Duke’s Beatles signatures, also in an album with those of Roy Orbison and many others, fetched £1500 ($2,325). These coincidences can be a useful guide to market values. 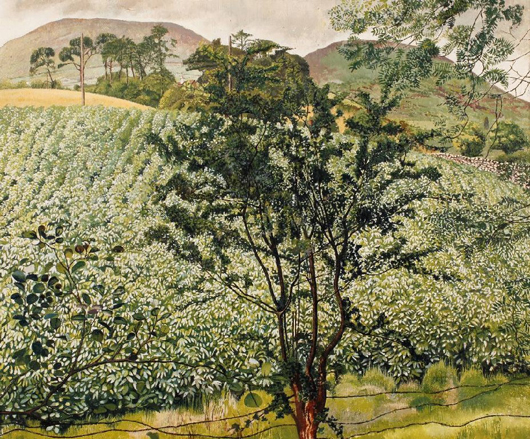 Fine examples of the work of Sir Stanley Spencer seldom come under the hammer; hence the £195,000 ($302,000) offered for this fine landscape of 1952 titled ‘Potato Patch, Rostrevor,’ at Duke’s in Dorchester in April. Image courtesy of Duke’s.

That price indicates the infrequency with which major works by Spencer come up for sale.

Perhaps the most noteworthy news from the regions this month was the innovative collaboration forged between the new UK regional auction body, the Association of Accredited Auctioneers (known as “Triple A” for short), and their Chinese counterparts. The 21 members of the UK group contributed lots to a 900-lot auction of Western art and antiques staged in Xiamen Freeport on April 19 in conjunction with Epailive, Asia’s on-line live bidding portal. 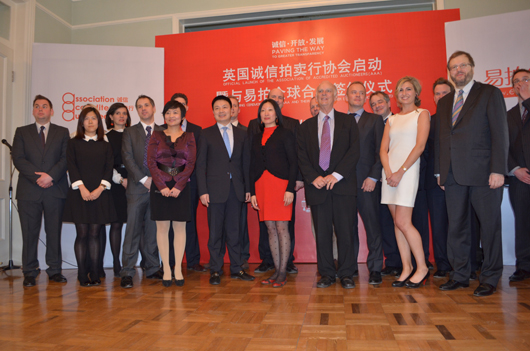 ‘Paving the Way to Greater Transparency’—organizers of the first UK-Chinese collaborative auction in Xiamen pose for a group photograph. Image courtesy of Chris Ewbank and the Association of Accredited Auctioneers (AAA).

Guildford auctioneer Chris Ewbank of the Association of Accredited Auctioneers and QiQi Jiang, founder of China’s EpaiLive, at the first collaborative auction in Xiamen Freeport in April. Image courtesy Ewbanks and AAA.

was the main entrepreneurial force behind the project. He told Auction Central News that although only around 25 percent of the lots found buyers the consensus was that the endeavor had been a great success. “An unsold rate like that would be considered a disaster in the UK,” he said. “But that didn’t apply here. We were mainly concerned to test the market and we succeeded in that regard. We covered our costs and learned a great deal about the potential for future collaborations with China.”

Ewbank said that an enthusiastic reception greeted the silver, clocks and the better quality Victorian and Edwardian furniture in the sale, but other categories were clearly not wanted by Chinese buyers. These includes pictures, coins, stamps and most of the higher value furniture. That said, notable exceptions included an important pair of Louis XVI-style gilt bronze amboyna center tables by Francois Linke, which sold for 2.3 million RMB ($377,960), 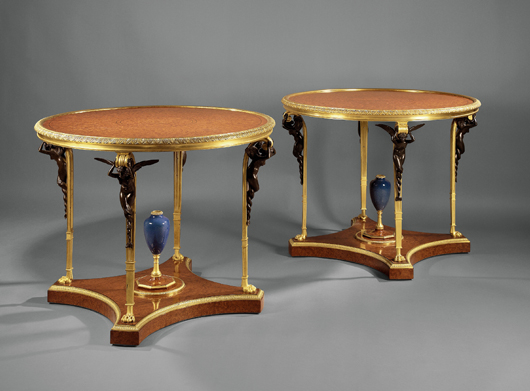 while a highly unusual Louis XV-style gilt bronze mounted kingwood and marquetry writing desk and cartonnier, the clock dial signed “Brindeau a Paris,” sold for 1.38 million RMB ($226,790), and a fine Louis XVI-style gilt bronze mounted marquetry commode after a model by Jean Henri Riesener sold for 1.15 million RMB (£188,980). Those are decent prices under any circumstances. 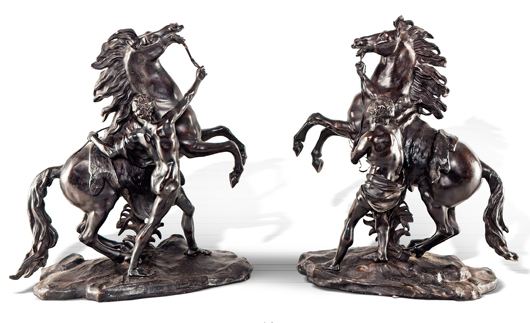 This pair of bronze Marly horses fetched the equivalent of £10,000 ($15,500) at the Xiamen auction of Western art and antiques organized by the UK’s Association of Accredited Auctioneers and EpaiLive in China. Image courtesy Ewbanks and AAA.

“I see this venture as a huge international coup for our members,” said Ewbank. “We are also giving a lead to Chinese auctioneers’ associations because they are not happy with what is happening in their market and want to see it develop properly.” The sale went out under the slogan: “Paving the Way to Greater Transparency.” It will be interesting to see whether future collaborative ventures between the various parties succeed in delivering on that laudable aim.

With so much media attention currently focused on the high-ticket, blue-chip end of the art market, Triple A’s attempt to open up new overseas markets for mid-price furniture, works of art and collectibles has to be seen in a positive light. Here at home, and sensitive to these recessionary times, some UK auctioneers have been marketing themselves as “recycling agents”—an affordable and environmentally friendly alternative to buying new. Tennants, the go-ahead North Yorkshire auctioneers, alert to the growth of the Affordable Art Fair— which is now franchised in many cities around the world—have started holding sales of “Antique Interiors and Affordable Art,” which seem to be going down well with local buyers.

In April Tennants also ventured into ethnographic material and arms and armor. They saw lively bidding for three Andaman Island wooden bows of double paddle form, which climbed over an estimate of £600-800 to make £5,800 ($8,975),

Yorkshire auctioneers Tennants’ recent sale of ethnographic material included these three Andaman Island wood bows, which together climbed over an estimate of £600-800 to make £5,800 ($8,975). Image courtesy of Tennants.

while among the collectible guns a pair of late 18th-century officer’s flintlock dueling pistols by Robert Wogdon of London made £6,000 ($9,300) 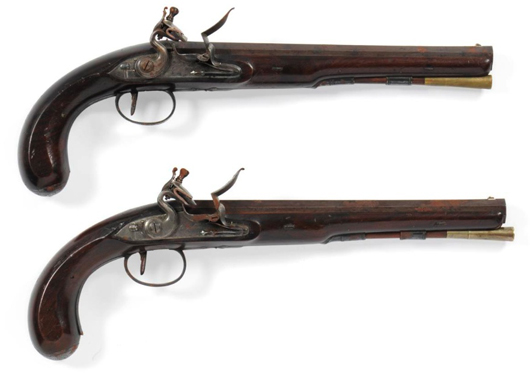 This pair of late 18th-century officer’s flintlock dueling pistols by Robert Wogdon of London made £6,000 ($9,300) at Tennants in Yorkshire. Image courtesy of Tennants.

Gallery Report: May 2013
Scroll to top