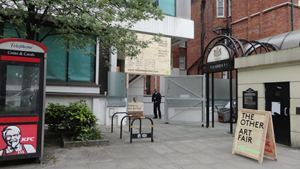 The inconspicuous entrance to The Other Art Fair, one of London’s most adventurous contemporary art fairs. Image Auction Central News.

LONDON – You could have walked past the entrance to The Other Art Fair in the fashionable Marylebone district of London last week without noticing it, such is the unpretentious, low-budget approach to this still relatively new artist-led London art fair. The event is staged twice a year, once in the spring, and again in October at the Truman Brewery in East London to coincide with the bigger high-ticket Frieze Fair. Its real innovation is in giving the public an opportunity to buy affordable art from around £50 upwards direct from the artists. By all accounts it is a model that is working well, no doubt in large part due to its informal approach to location and design

Having passed the front desk, visitors descended a flight of concrete steps to arrive in the service basement of a municipal office block complete with exposed ductwork and emergency lighting. Even the reception desk had to compete with a backdrop of overflowing dumpsters and industrial detritus, none of which remotely ruffled the placid calm of the young woman graciously greeting visitors. 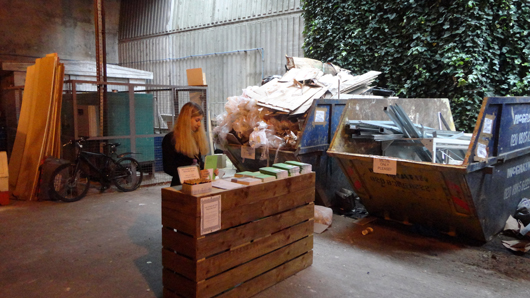 Skip the niceties, the reception desk of The Other Art Fair offers a funkier take on the conventional art fair model. Image Auction Central News.

So accustomed have we become to the glitzy veneer of top-end art fairs like Frieze, the European Fine Art Fair in Maastricht, the Masterpiece Fair, Art Basel and the rest, all of which are focused on their core clientèle of ultra high net worth individuals, that the street-wise, Reservoir Dogs approach of The Other Art Fair comes across as a breath of fresh air. This is fair design that reinvents the grit and grime of a now largely forgotten avant garde approach to contemporary art: fresh and funky and full of vibrant energy.

Inside, we spoke to Georgia Parodi-Brown of pioneering online auction house Paddle 8, who talked with enthusiasm about the fair’s approach and the buzz in the air on the opening night. She was on the stand of London-based Art Below whose founder, Ben Moore, has partnered with Paddle 8 to auction artist-designed Star Wars Storm Trooper masks customized by the likes of Jake and Dinos Chapman and Matt Collishaw. 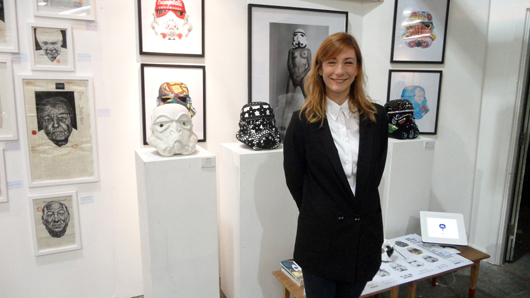 Georgia Parodi-Brown of Paddle 8 at The Other Art Fair in Marylebone in April. Image Auction Central News.

The so-called “Art Wars” initiative aims to raise funds to launch a search for Ben’s brother Tom, who has been missing for 10 years.

The best judges of an artist-led fair like this are surely the exhibiting artists themselves. Stand rentals are competitively priced at around £700, a mere fraction of what the fashionable fairs charge. Still, artists would not return if they failed to cover their costs. Those we spoke to were extremely positive. Rachel Ann Stevenson was upbeat at the interest expressed in her bronze sculptures. 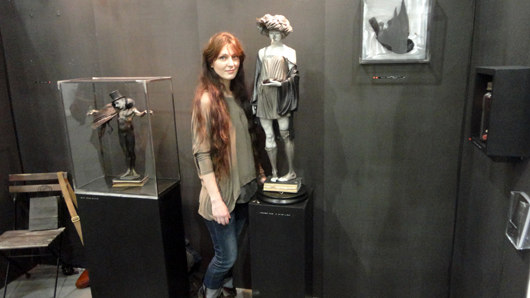 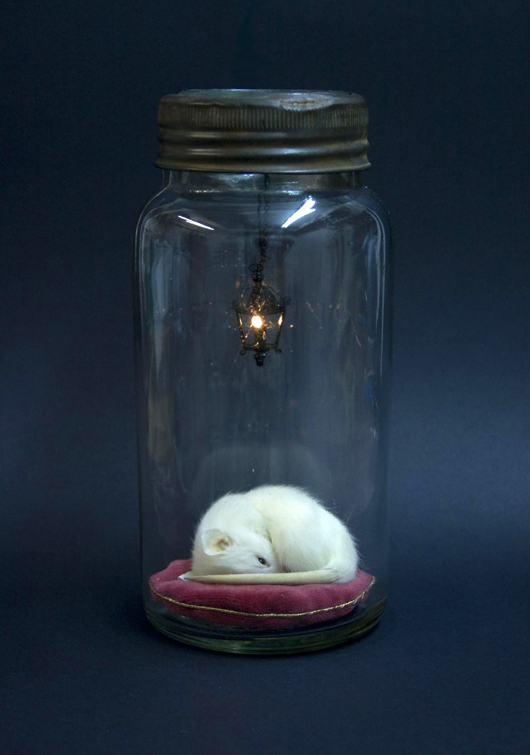 Also smiling was self-trained photographer Roy Tyson whose Roy’s People stand is now a regular presence at The Other Art Fair events. His quirky photographs comprising tiny model figures placed in real world environments were flying off the walls. “The Other Art Fair is always good for me,” said Roy. “Last October’s event at the Truman Brewery was mental. But this one’s been great too. I’ve sold loads.” 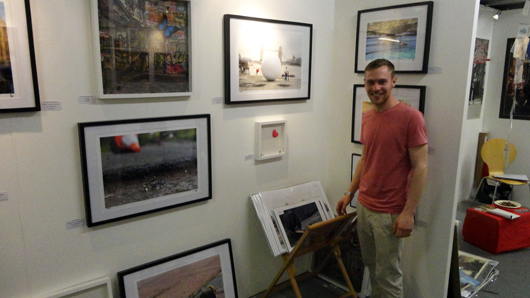 Unsurprisingly, these positive testimonials were greeted with a broad grin by the fair’s enterprising young founder-director Ryan Stanier, a graduate of Kingston University’s School of Business and Law.

Ryan Stanier, founder-director of The Other Art Fair at his Marylebone event in April. Image Auction Central News.

“We’ve had a fantastic and encouraging response from artists and visitors alike,” said Stanier. “The challenge is finding the right venue to keep costs manageable but the atmosphere this time has been great, visitor numbers are up and sales have been very positive.”

A few days after The Other Art Fair closed, the venerable London Original Print Fair opened at the Royal Academy of Arts in Piccadilly. 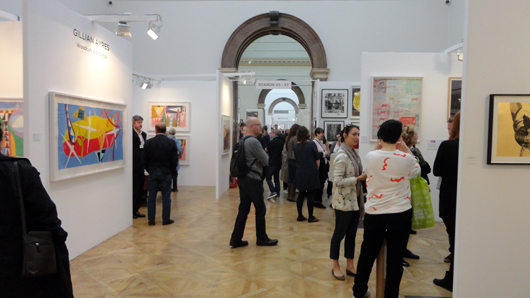 The final day of the London Original Print Fair was well attended at the Royal Academy on April 27. Image Auction Central News.

This is a rather more sedate affair but there was a clear sense on the final Sunday of a highly focused clientele with a specialist interest in this section of the market. Next year will be the fair’s 30th anniversary, an event that director, Helen Rosslyn is looking forward to with obvious relish. 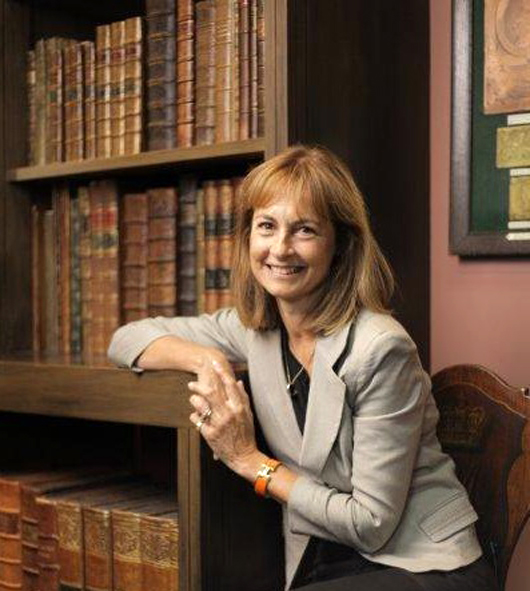 “This is my 27th fair,” she told Auction Central News, “and once again we’ve had a very good response. The First World War centenary theme explored by some dealers has been particularly successful, with Gerrish, the Fine Art Society and Osborne Samuel all reporting an encouraging number of sales of works by war artists like Nash and C.R.W. Nevinson.”

Asked how the London Original Print Fair has managed to stay ahead, given the capital’s increasingly crowded fair circuit, Rosslyn observed that the LOPF’s strict specialism has always worked in its favor. “We may not get the same levels of visitors as some of the bigger fairs, but our buyer/sale rates are proportionally higher thanks to our core focus.”

The stand of fine art print dealers Gerrish, who were doing a solid trade in prints by World War I artists at the London Original Print Fair in April. Image Auction Central News.

This was borne out by Gordon Samuel, director of London Modern British dealers Osborne Samuel, who remarked, “We were delighted with the number of serious international collectors at this year’s London Original Print Fair and have made some significant sales and met a number of new clients. We’ve been delighted with sales across the board and have enjoyed meeting a number of curators from institutions who regard the fair as an important and necessary date in their arts diaries.”

This year the London Original Print Fair benefited further by coinciding with the Royal Academy’s exhibition of chiaroscuro woodblock prints from the collection of German contemporary artist Georg Baselitz, which reinforced the print theme. The Royal Academy was also helping celebrate the centenary of the birth of the late British postwar sculptor Lynn Chadwick (1914-2003), by displaying four of the artist’s large angular steel beast sculptures. 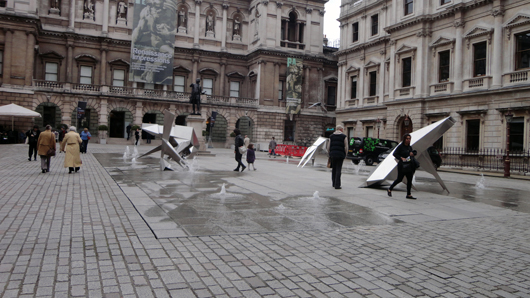 Steel beast sculptures by the late British artist Lynn Chadwick on the forecourt of the Royal Academy. This year is the centenary of Chadwick’s birth. Image Auction Central News.

Chadwick was the winner of the International Sculpture Prize at the Venice Biennale in 1956, but despite the presence of many of his highly individualistic works in prominent public locations, his oeuvre remains largely unrecognized by the general public. Perhaps the various exhibitions taking place around London this year will go some small way toward reinvigorating interest in his significant contribution to postwar British sculpture.

And finally, turning to the auction circuit, a brief note about a most unusual collection coming under the hammer of Canterbury Auction Galleries on June 12. The auction house has been instructed to disperse the contents of Gregory, Bottley & Lloyd, for 150 years one of the most prominent dealers in minerals, fossils and natural history curiosities.

Minerals and fossils from the Gregory, Bottley and Lloyd business, the contents of which will be dispersed by Canterbury Auction Galleries in June. Image Auction Central News.

Established in London in 1850 by James Reynolds Gregory, the firm was one of the longest surviving mineral specimen suppliers in the world. In 2008 the stock, original Victorian cabinets, display cases, books, specimens and geological antiques, were moved to Walmer in Kent. The auction follows the decision by owners Brian and Mary Lloyd to retire.

It will be fascinating to see how such a highly specialist and somewhat idiosyncratic collection is greeted by buyers in Canterbury on June 12.

The original interior of the Gregory, Bottley and Lloyd fossil and minerals business, the stock, fixtures and fittings of which will be dispersed by Canterbury Auction Galleries in June.