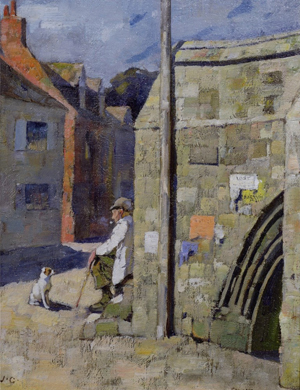 ‘The Bridge, Crowland’ by Sir James Guthrie (1859-1930), oil on canvas, 12 inches by 9 1/2 inches, on show at the Fleming Collection’s exhibition of works by the Glasgow Boys. Image courtesy The Fleming-Wyfold Art Foundation.

London has never been the most bicycle-friendly city in Europe, with confrontations between cyclists and motorists often teetering on the brink of all-out warfare as they compete for territorial advantage in the ever-more congested streets. However, this summer all that looks set to change after London’s first city-wide bike-rental initiative came into service, largely thanks to the tireless efforts of London mayor — bicycle-loving Boris Johnson. Whether the plentiful new Barclays-sponsored bicycles — already dubbed “Boris Bikes” — will bring London into line with bike-friendly cities like Amsterdam remains to be seen. One thing is for sure, however: the bikes are a superb way to get around London’s museums and galleries, arguably the city’s most significant tourist draw. This year there is no shortage of superb exhibitions to pedal around.

Although the art market virtually closes down during the summer months of July and August, our national museums and public galleries are in full spate as tourists pour in. London is about to be awash with exhibitions devoted to The Glasgow Boys — the group of painters that gathered in Glasgow during the last quarter of the 19th century. The fulcrum for the current series of London shows is a major new exhibition at the Royal Academy of Arts: Pioneering Painters: The Glasgow Boys 1880-1900 from Oct. 30 to Jan. 31. Other galleries have capitalized on that event and organised their own Glasgow School shows.

This show offers a fine illustration of the shared sense of purpose and the commonality of technique and subject matter that united the young avant-garde painters in opposition to prevailing academic dogma in the 1880s.

Sir James Guthrie’s The Bridge, Crowland might stand as a visual manifesto for their aims and aspirations. Painted outdoors direct from the motif, or “en plein air” to use the correct French term, its naturalistic palette and broad, square, brush strokes reveal the influence of contemporary French painters such as Jules Bastien-Lepage on the Glasgow style. David Gauld’s A Breton Village, demonstrates the willingness of the Glasgow painters to travel abroad in order to expand their aesthetic repertoire and to paint the subjects so dear to their Continental counterparts, while the same artist’s Eve of Saint Agnes partakes of the prevailing European Symbolist movement and prefigures the Glaswegian strain of Art Nouveau developed by Charles Rennie Mackintosh and his followers. 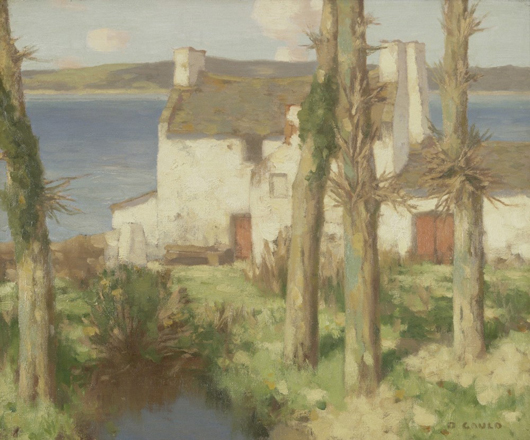 David Gauld, (1865-1936), ‘A Breton Village,’ oil on canvas, 20 by 24 ins, on show at the Fleming Collection’s exhibition of works by the Glasgow Boys. Image courtesy The Fleming-Wyfold Art Foundation. 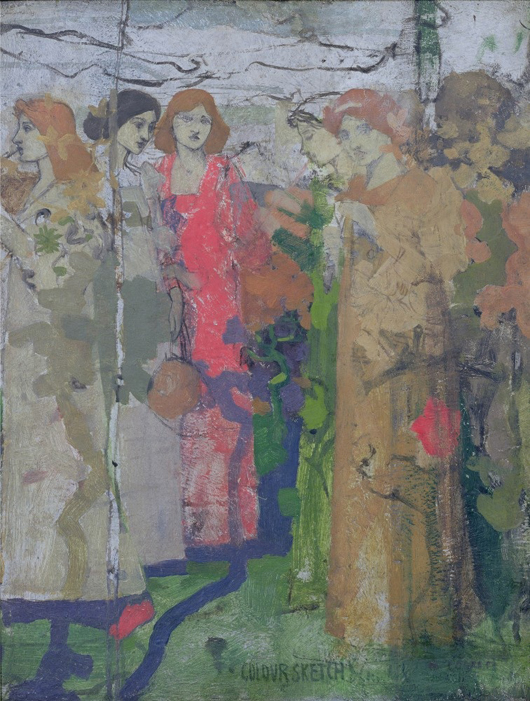 ‘The Eve of St Agnes’ by David Gauld (1865-1936), circa 1890, colour sketch oil on canvas. 20 inches by 16 inches, at the Fleming Collection’s exhibition of works by the Glasgow Boys. Image courtesy The Fleming-Wyfold Art Foundation.

To coincide with the show, The Fleming Collection’s annual Friends’ Lecture on Nov. 23 will be given by Kenneth McConkey, a renowned authority on Scottish painting of the period.

Another London gallery seeking to benefit from swell of interest sure to be generated by the Royal Academy’s Glasgow exhibition is the Fine Art Society. Their next big event — Lavery and the Glasgow Boys — celebrates the contribution of Belfast-born painter Sir John Lavery (1856-1941) who became a pivotal figure in the evolution of the Glasgow school of painting. This is a traveling show that began at Bourne Fine Art in Edinburgh before proceeding to Belfast and it culminates at the Fine Art Society’s New Bond Street premises from Oct. 27 to Nov. 18.

Among the seminal works on display here will be Lavery’s luscious oil on canvas The Goose Girls, signed and dated 1855, showing two Breton girls guiding their geese down a riverside path, while Arthur Melville’s (1855-1904) The North Gate, Baghdad, signed and dated 1882, offers further evidence of how widely traveled were many of the Glasgow painters. George Henry’s (1858-1943) Through the Woods of 1891 demonstrates the rich and vibrant palette that marked the Glasgow Boys out from their contemporaries and which so shocked conventional taste. 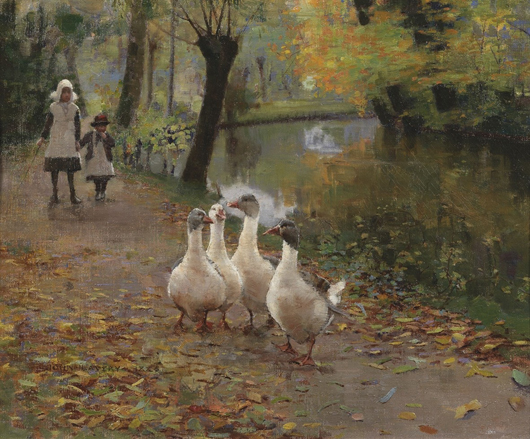 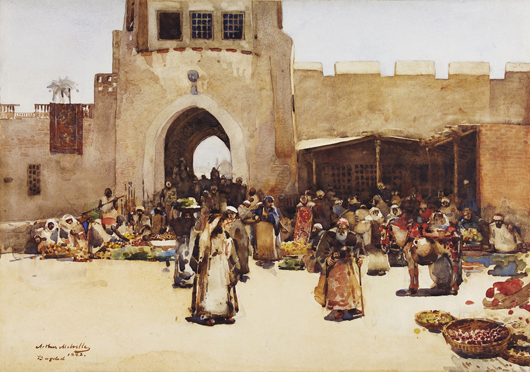 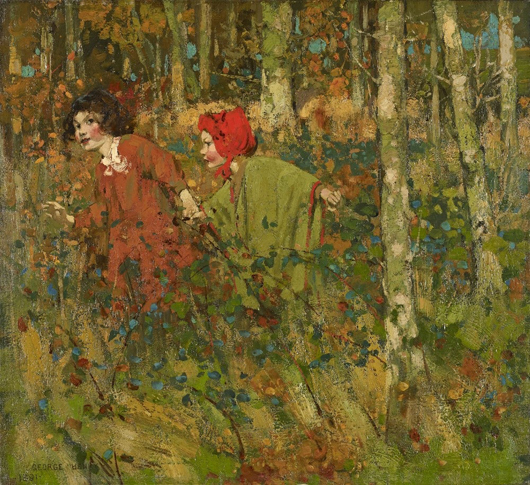 George Henry, ‘Through the Woods,’ signed and dated 1891, oil on canvas, 22 by 24 inches. Image courtesy The Fine Art Society.

Sir John Lavery always figures most prominently in Glasgow Boys exhibitions, chiefly because he was the most internationally successful of the Glasgow group. However, the Fine Art Society have also managed to anchor their exhibition around the publication of Kenneth McConkey’s updated and extended biography, John Lavery: A Painter and His World, which will be available from the Fine Art Society throughout the exhibition.

And so from young masters to Old Masters. The Wallace Collection, secreted away in Manchester Square, just north of Oxford Circus, is often considered London’s equivalent of the Frick Collection in New York. Its collection of French 18th-century and 19th-century paintings and furniture is one of the finest in Europe, to say nothing of its extensive collection of arms and armor from around the world. All this makes the Wallace Collection the perfect place to study the history of collecting.

The Wallace has been running a Masters course in the History of the Art Market and the History of Collecting for the past five years and so successful has it been that they have now added another course on the contemporary art market in partnership with the recently refurbished and extended Whitechapel Art Gallery.

The Wallace is a closed collection, which means it cannot be added to, and nor can its objects be loaned out to other museums. It is not, however, prohibited from borrowing works from other collections and thus is able to stage superb exhibitions of painting and sculpture. The next major event in its calendar is Poussin to Seurat: French Drawings from the National Gallery of Scotland, which will run from Sept. 23 to Jan. 3.

Sadly the discipline of drawing was long ago evicted from fine art colleges, most of which tend to see it as an unnecessary and anachronistic distraction for students focusing on careers as conceptual artists. However, exhibitions of drawings have been enjoying huge popularity among the general public. Thousands flocked to the British Museum’s recent exhibition of Italian Renaissance drawings from the Uffizi, and doubtless the Wallace’s new exhibition will also draw significant crowds, so rare is it to get a chance to see fine historical examples of an art form that displays genuine skill and mastery.

Among the broad range of works on display will be drawings by academic artists such as Claude and Poussin, through 18th-century masters Watteau and Boucher, to 19th-century Romantics such as Delaroche and Delacroix, and on to the classical exactitude of Ingres. The exhibition culminates in fine drawings by French Impressionist and post-Impressionist practitioners such as Pissarro and Seurat.

Regular visitors to the Wallace will be intrigued to see the only known preparatory drawing for the Wallace Collection’s own Poussin painting A Dance to the Music of Time, while other jewels in the show include Louis Roguin’s extraordinary A Jewish Lady from Algiers, French Mannerist painter Jacques Bellange’s, Madonna and Child, with Saint James the Great, Quenching the Fires of Hell, (circa 1600-1610), and Paul Delaroche’s masterly rendition of Les Girondins, showing members of the eponymous French Revolutionary political faction engaged in the sort of impassioned rhetoric that characterized their meetings. 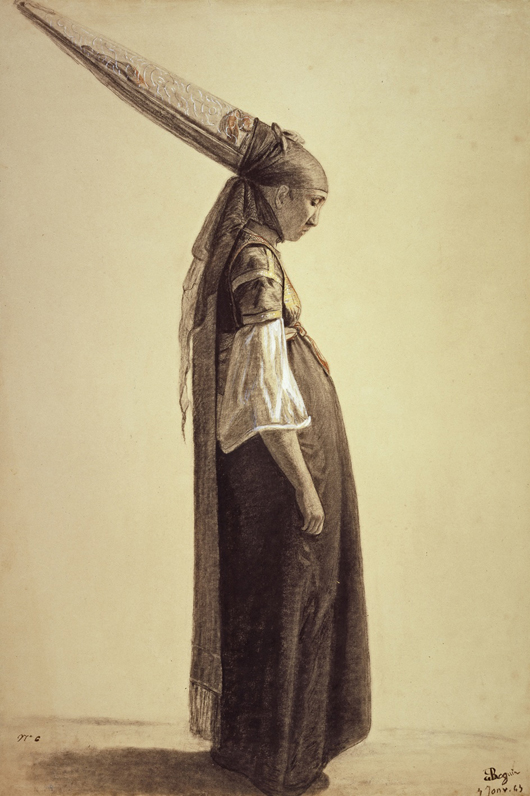 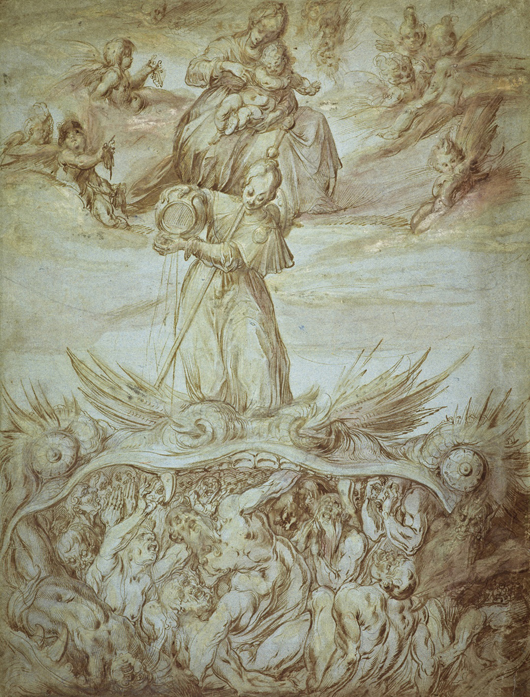 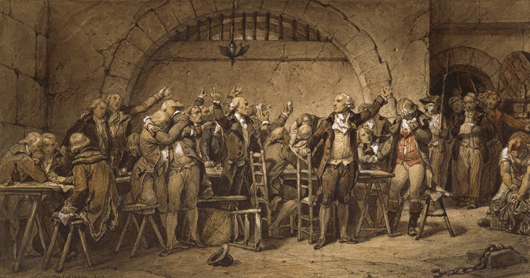 One other notable inclusion in this show is a remarkable drawing by the French Pointillist painter Georges Seurat, a study for his famous Une Baignade, Asnières (1883-4), formerly in the Tate Gallery and now in the National Gallery. 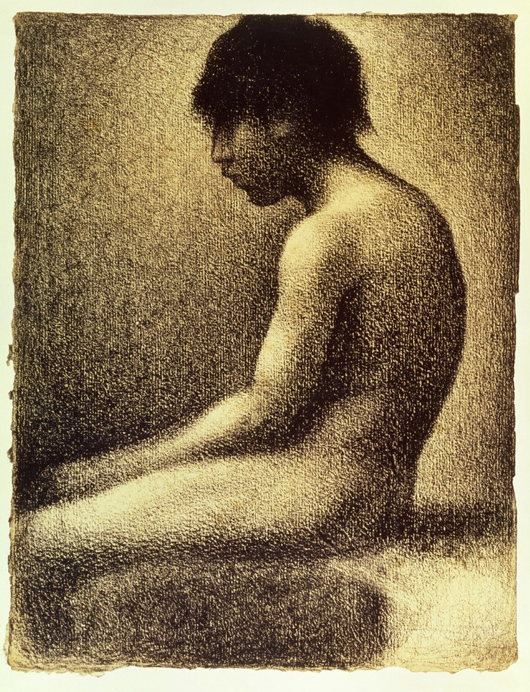 Happily, the Wallace Collection is just a short bicycle ride from the National Gallery.

Tom Flynn is a London-based writer and journalist. His monograph on British sculptor Sean Henry was published by Scala.