LONDON – One of the most extraordinary events on the UK provincial auction circuit in recent years was the sale at Ewbank Clarke Gammon in Woking, Surrey, in April 2007 of a consignment of discarded fragments from the studio of Francis Bacon. The pieces in question — and in pieces they truly were — had been thrown onto a dumpster outside the artist’s studio from where they were “rescued” by an electrician, Mac Robertson, who had been working at Bacon’s studio at the time. Robertson later claimed that Bacon had given him permission to take the material, although whether Bacon, who died in 1992, had any idea that the stuff would later surface at a Surrey auction rooms is doubtful.

In any event, when Robertson finally consigned the so-called Robertson Collection to the Woking auction — 45 lots of letters, diaries, photographs, ephemera and a few small oil paintings (many of them “canceled” by Bacon using a box-cutter) — the haul, offered by auctioneer Chris Ewbank in separate lots, realized over £1 million.

Now another chapter is about to be written in the annals of discarded Bacons. Many years ago, Lewis Todd, a Cambridge-based commercial artist, acquired some secondhand canvases from Heffers, a UK art materials supplier, seemingly unaware of the importance of what was on the back. That turned out to be nothing less than some of Francis Bacon’s studies for his famous “Screaming Pope” series. 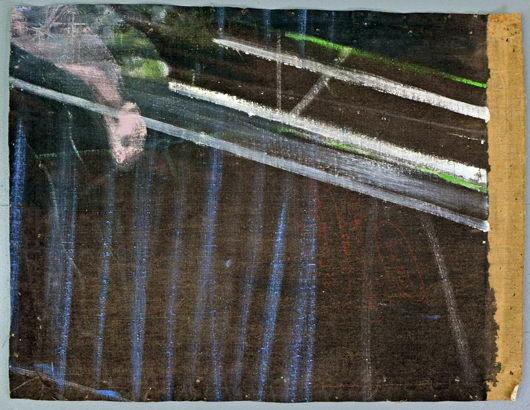 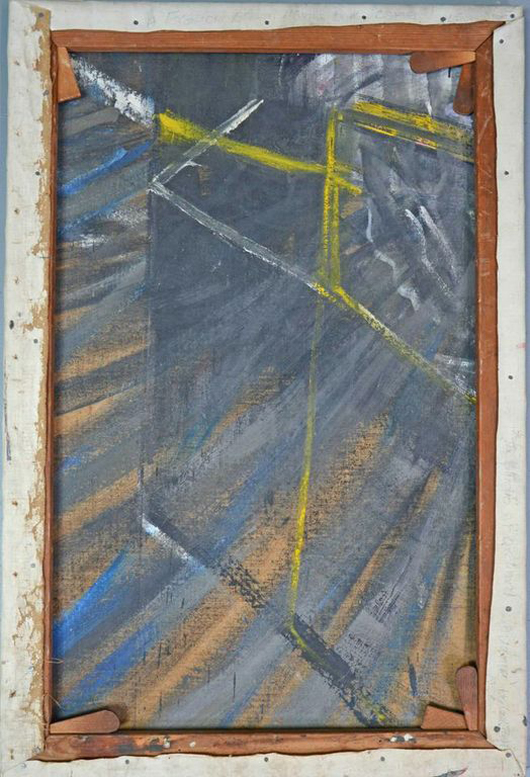 Todd was told he could use the canvases as long as he cut them into pieces. Those fragments have also now been consigned for sale, and once again Chris Ewbank will be wielding the gavel on March 20. The consignment is “conservatively estimated” to make around £100,000 ($152,000), although the reception that greeted the Robertson collection suggests that “conservative” could turn out to be something of an understatement. In November 2012, Francis Bacon’s Untitled (Pope) of 1954 sold in a New York auction for a record £18.7 million ($28.4 million). Sadly, Todd died in 2006 and so did not live to see his old canvases make auction history. Auction Central News will be at the Woking sale to witness what promises to be another remarkable moment in the bizarre history of sliced Bacon.

The UK’s provincial fine art salerooms are full of surprises, as the Bacon story confirms. Not everything has to sell for a six-figure price to be newsworthy, however, although the connection with a celebrity or a famous person clearly helps. Tennants of Leyburn, North Yorkshire, are arguably the most important UK auction room north of London and their regular sales often deliver notable prices. On Feb. 22, they held a sale of cameras and photographic equipment that included a fascinating set of 135 magic lantern slides taken from photographs by Frank Hurley documenting Ernest Shackleton’s expedition to the Antarctic from 1914-1917. 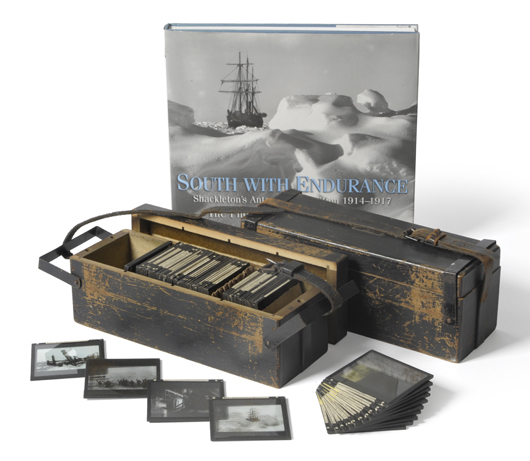 A set of 135 photographic magic lantern slides depicting Shackleton’s Antarctic Expedition of 1914-1917, from photographs taken by Frank Hurley, which realized £4,500 ($6,830) at Tennants in Leyburn Yorkshire on Feb. 22. Image courtesy Tennants.

Meanwhile, Tennants’ book sale on Feb. 27 included a volume that for many adults will be remembered with the same fondness that young people reserve for the Harry Potter series today — Arthur Ransome’s Swallows and Amazons. The first edition that appeared here, dated 1930 (it was still popular in the 1960s and 1970s), retained its dust jacket and was in excellent condition.

Originally priced at 7s 6d (the equivalent of 37 pence sterling in today’s currency), the hammer fell at £7,000 ($10,640), a price that may send many adults scampering into their attics to search for their own long-neglected copies. Condition is everything, however.

Down at the other end of the country, LiveAuctioneers client Canterbury Auction Rooms enjoyed good prices across most categories of their Feb. 12 sale. Among the paintings was a small oil on panel by Antonietta Brandeis (1849-1910) depicting the Piazza San Marco (View of St. Mark’s Square, Venice) looking toward the cathedral. 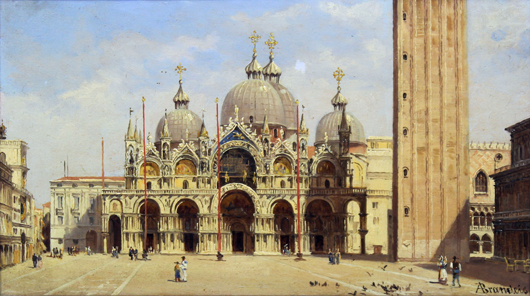 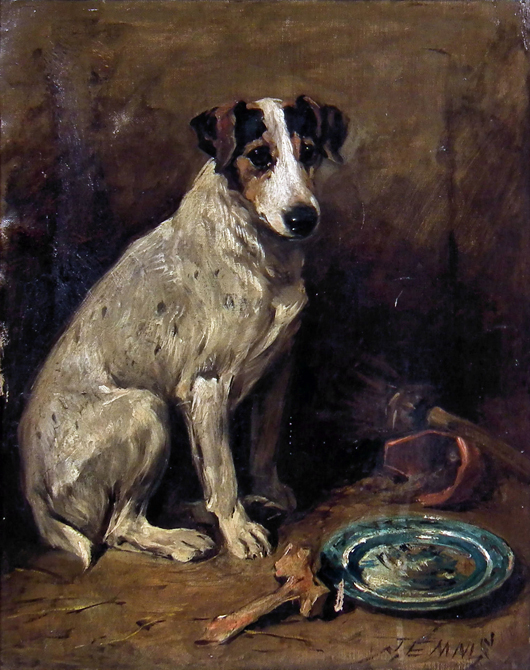 Finally, among the watches was a good 19th century silver and tortoise-shell covered triple-cased verge pocket watch by Edward Prior, London, the case hallmarked for 1866. 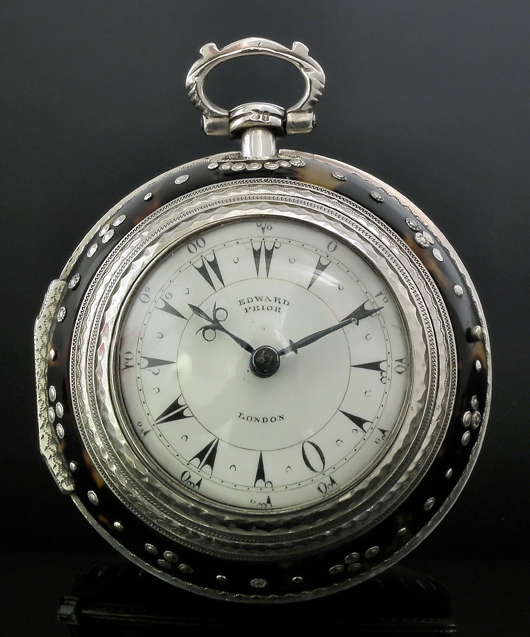 Prior, who is recorded working in London from 1800-1868 was regarded as a maker of some repute and was especially noted for producing watches like this one for the Turkish market. That small nugget of information may have propelled it way over the low estimate, the hammer falling at £3,100 ($4,700).

A dozen or so years ago, Internet entrepreneurs were struggling to convince the conservative auction industry of the potential benefits of embracing new technology. Today, most auctioneers are enthusiastic devotees and it’s easy to see why. Barely a week goes by without further evidence of the benefits of circulating your auction catalogs electronically and bringing the global market into the saleroom via internet bidding. East Yorkshire auctioneers Dee Atkinson and Harrison, provided us with the most recent instance of this at their general sale of antiques and fine art on Feb. 15. Hiding among the lots of metalware was a lot cataloged simply as “An Eastern copper hanging bowl of boat shaped form chased with bands of stylized flower heads and fitted with suspension chain, 9 1/2 inches wide, together with a cast brass figure of an Eastern deity, 7 1/2 inches high.” The poor Eastern deity — which was not illustrated in the catalog — may have been somewhat overlooked by the auctioneers, but thanks to new technology the trade spotted it and knew what it was. 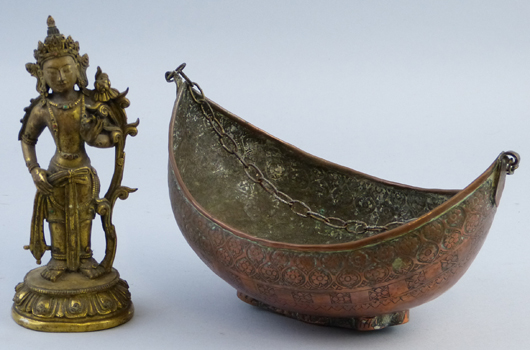 The illustration shown here offers more than a hint that this was no ordinary “cast brass figure” a suggestion confirmed when a derisory estimate of £30-£40 was demolished by a winning bid of £11,100 ($16,870).

And finally a brief note about one of the most important European fine art fairs happening in March. The European Fine Art Fair in Maastricht needs no introduction since it is now widely acknowledged as one of the most important fine art fairs in the world. TEFAF boasts a range of historical material that makes the numerous contemporary events seem somewhat shallow by comparison. It is hard to summarize the TEFAF experience. Suffice to say that it always feels like a privilege to be exposed to so many museum-quality works of art across so many sectors of the market. Happily the Old Master category — which originally gave rise to the fair in the mid-1980s — remains one of TEFAF’s core strengths. Although not exactly typical of the quality on offer, since it is extraordinary by any measure, the masterpiece by Orazio Gentilleschi (1563-1639) — David Contemplating the Head of Goliath

— on the stand of London’s Weiss Gallery, is a good example of why it is worth making the trip to the Dutch city. Unpublished and having been in private collections in France and Belgium since the 1930s, its market freshness and historical importance have resulted an asking price of around 8 million euros ($10.4 million).

Although not perhaps of quite same historical significance, another work on the Weiss stand this year is a recently rediscovered work by Sir Joshua Reynolds, the first president of London’s Royal Academy. Study for the Uffizi Self-Portrait

A recently rediscovered work by Sir Joshua Reynolds, ‘Study for the Uffizi Self-Portrait,’ painted around 1774-5 for the Medici Collection at the Uffizi in Florence. It will be for sale on the stand of the Weiss Gallery at the European Fine Art Fair in Maastricht from March 15 to 24. It has with an asking price of 285,000 euros ($373,100). Image courtesy Weiss Gallery, London.

was painted around 1774-5 after the Grand Duke of Tuscany asked Reynolds to contribute to the gallery of self-portraits that formed part of the Medici Collection at the Uffizi in Florence. Keen to be seen as an intellectual, Reynolds portrayed himself in the scarlet robes and black velvet cap of an Oxford University Doctor of Civil Law, an honorary title of which he was immensely proud. Given Reynolds importance in the annals of 18th-century English painting, the asking price of 285,000 euros ($373,100) seems eminently reasonable. It is just the sort of picture that brings museum curators from around the world to Maastricht seeking to fill gaps in their collections.

Before the TEFAF fair gets under way, however, many international dealers and collectors will be looking to stop over in London for the British Antique Dealers’ Fair (the BADA Fair), which takes place at the Duke of York’s Square in Chelsea from March 13. Rather than preview it here, Auction Central News will be at the fair and we will report the highlights next month.