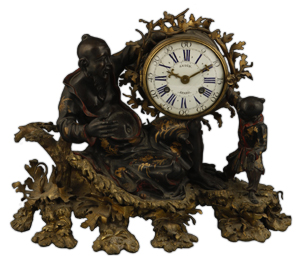 Despite its poor condition and replaced movement, this 18th century French mantel clock, the dial signed ‘Gudin,’ realized £54,000 ($85,572) at the Dorchester salerooms on Duke’s in February. Image courtesy Duke’s.

It is by no means unusual for Asian works of art to emerge from the relative anonymity of provincial auction catalogs to create a stir with record-breaking prices. Unfortunately, some recent headline-grabbing results have subsequently become the source of extreme embarrassment for the auctioneers who accepted the bids but who have still not been paid. This sorry state of affairs is even being acknowledged in the high temples of economic analysis. The recently published Deloitte/Art Tactic Art & Finance Report on the state of the global art market quoted figures from the Chinese Association for Auctioneers, which suggested that “40 percent of the U.S.$1 million-plus works remain unpaid after six months.” More worryingly, it goes on to warn that “there is a high probability that many of these works will never be paid for.”

Those words will cause already cautious provincial auctioneers in the UK to look with even greater scrutiny on the credit-worthiness of potential bidders at future sales of Asian art. Bloomberg recently reported that West London auctioneer Peter Bainbridge has still not been paid the £51.6 million bid by a Chinese buyer for a Qing vase at his sale in December 2010. He is reported to have made trips to China to try and resolve the matter, but to no avail.

Happily, no such problems surrounded one of the more interesting Asian-flavored items that turned up at Duke’s saleroom in Dorchester a couple of weeks ago. This was an 18th century mantel clock in a case decorated with a lacquered bronze figure of a Chinese scholar and a small boy. It was certainly in the Chinese taste, or perhaps goût Chinois would be a more accurate way to describe it since the movement was French, signed on the enamel dial — Gudin — almost certainly indicating Paul Gudin (active 1729-1755), which is considered one of the most illustrious clockmakers of the reign of Louis XV.

Gudin’s clock movements were frequently incorporated into elaborate cases by renowned craftsmen such as André-Charles Boulle and others. Examples are included in the royal collection at Windsor Castle, at the Metropolitan Museum of Art in New York, and at the J. Paul Getty Museum in Los Angeles.

Although a successful blend of the rococo and the then prevailing taste for chinoiserie, this particular clock was not in the best of health, being in generally poor condition and with a replaced movement. These factors clearly influenced the cautious estimate of £500-£1,000 and yet such was its potential that it quickly brought £54,000 ($85,572).

The Gudin clock was not the only interesting French object in the sale. An exquisite Napoleonic prisoner-of-war painted bone model of a guillotine had been consigned from a Dorset private collection 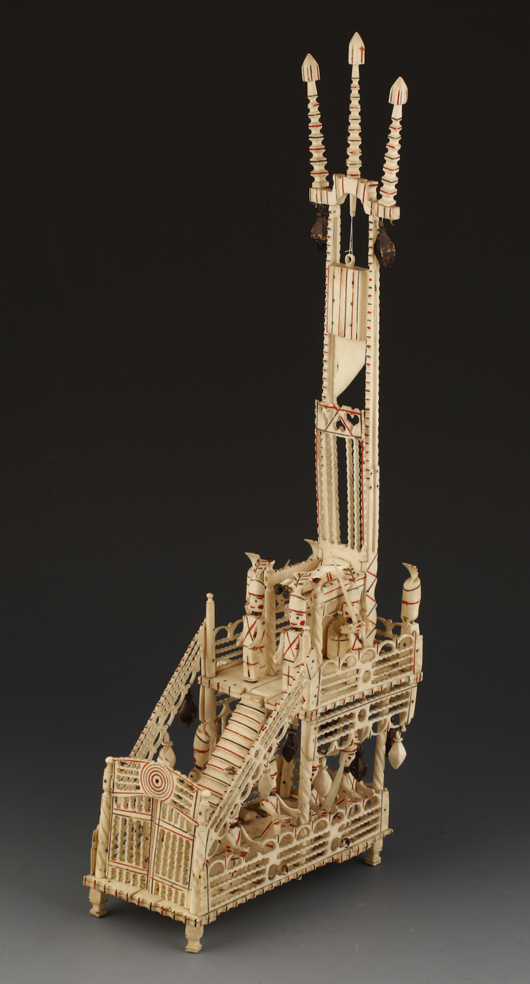 and reaffirmed what has long been a truism of the art market — that objects of great quality and rarity can be relied upon to generate keen interest, even in times of recession. It seems hard to believe that this gruesome form of capital punishment remained the official means of dispatching miscreants in France as late as 1989, although the last time it was used was in 1977. On this occasion the social history background can only have helped intensify the competition for this delicate model, which saw the hammer fall at £4,000 ($6,340).

India and Indonesia, like China, are emerging markets whose thriving economies are hatching hundreds of High Net Worth Individuals (HNWIs) every year. Many of these newly wealthy individuals nurture a desire to collect examples of their country’s ancient cultural heritage. Whether this factor helped fuel demand for a 13th century Indonesian carved andesite figure of Ganesha that came under the hammer at Duke’s sale 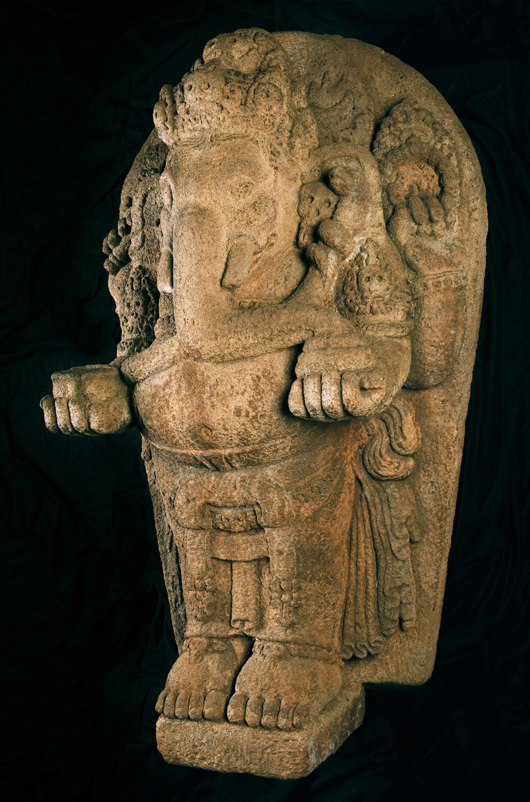 is unclear, but certainly it triggered some determined bidding. The monumental elephantine deity went on to attract a winning bid of £8,000 ($12,675).

London is currently abuzz with a mixture of anticipation and trepidation as preparations intensify for this summer’s Olympic Games. The anticipation is understandable as the event will usher in a capital-wide festival of cultural and sporting activities. The trepidation comes from a lingering doubt, frequently expressed by Londoners, as to whether the creaking transport network can accommodate such an influx of tourists.

Meanwhile, the spring art and antiques fairs are proceeding as usual, many of which are hoping to benefit from visitors arriving before the Olympic crush begins. The Chelsea Antiques Fair, which takes place March 21-25 at the Chelsea Town Hall, has been in operation since the 1950s and now claims to be “the world’s longest running antiques fair.” Quite how one might establish those credentials with any certainty is a moot point, but there is no doubting the fair’s popularity with local collectors and visitors alike. The 35 exhibitors at this year’s event are playing on the idea of a contemporary Grand Tour, hopping to attract intrepid intercontinental travelers with a nose for quality and rarity.

to be offered by London dealers Shapiro & Co.; a Liverpool creamware jug 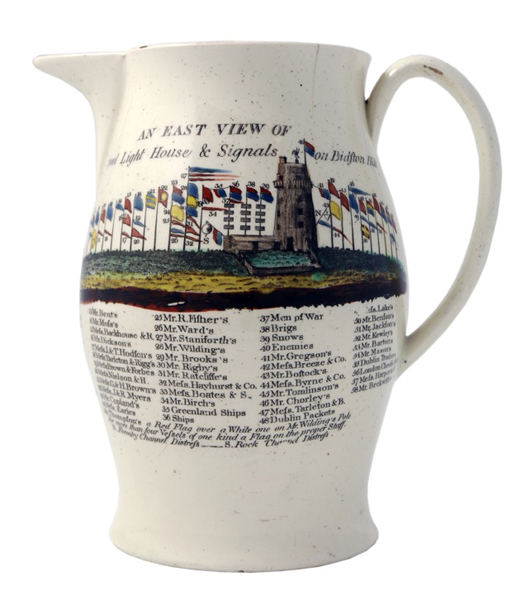 This rare inscribed and dated Liverpool creamware jug, 1793, painted and printed with ‘An East View of Liverpool Light House & Signals on Bidston Hill,’ is to be shown by Roger de Ville at the Chelsea Antiques Fair in March, priced at £1,575 ($2,500). Image courtesy Roger de Ville.

priced at £1,575 ($2,500) on the stand of Staffordshire-based pottery specialist Roger de Ville; a 19th century gilt bronze group of Apollo and Daphne

A 19th century gilt bronze group of Apollo and Daphne on a malachite and marble base, priced at £750 ($1,190) with Antediluvian at the Chelsea Antiques Fair. Image courtesy Antediluvian.

priced at £750 ($1,190) with Oxfordshire dealers Antediluvian, and a rare 19th century gilt bronze figure of Napoleon astride his favorite horse Vizir, 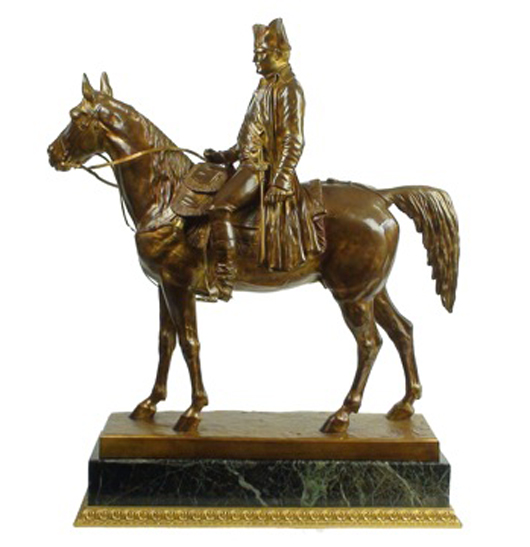 If Chelsea is the longest running fair, the coming weeks see the opening of two of Europe’s most prestigious art and antiques fairs — the British Antique Dealers’ Association (BADA) Fair, held in a purpose-built pavilion in Duke of York Square in London’s fashionable Chelsea district, March 21-27, and the European Fine Art Fair, the annual event organised by the European Fine Art Foundation (TEFAF) in the Dutch town of Maastricht March 16-26. The London BADA event is arguably the most conservative of the Spring fairs, showcasing the stock of 103 BADA members specialising in all the usual categories of furniture, ceramics, silver, jewelery and the decorative arts. The event will nevertheless offer an indication of the extent to which the market is bearing up against the inclement economic climate. London Eye will be present to test the temperature.

The TEFAF fair in Maastricht, meanwhile, is another rare opportunity to see many important works of art ultimately destined to take up permanent residence in the world’s great museum collections. The range could not be broader, with everything from a BMW car decorated by Alexander Calder 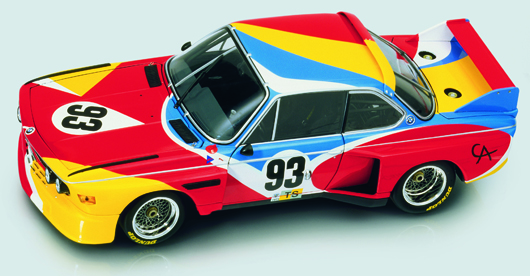 A BMW car decorated by American sculptor Alexander Calder, which be among the visitor attractions at the European Fine Art Fair in Maaastricht in March. Image courtesy Offer Waterman and TEFAF.

to masterpieces by the likes of Leonardo da Vinci and Henry Moore. 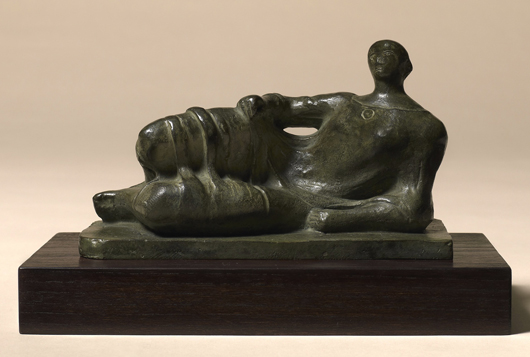 one of two maquettes made in 1945 for a memorial figure in Hornton stone at Dartington Hall in Devon. “I wanted the figure to have a quiet stillness and a sense of permanence,” Moore wrote. Those two qualities seem to have been successfully translated into the maquette to be shown at TEFAF where it will be priced at £450,000 ($713,450).

Another significant offering from the London trade is a newly discovered 16th century alabaster relief by the great German sculptor and woodcarver Tilman Riemenschneider, 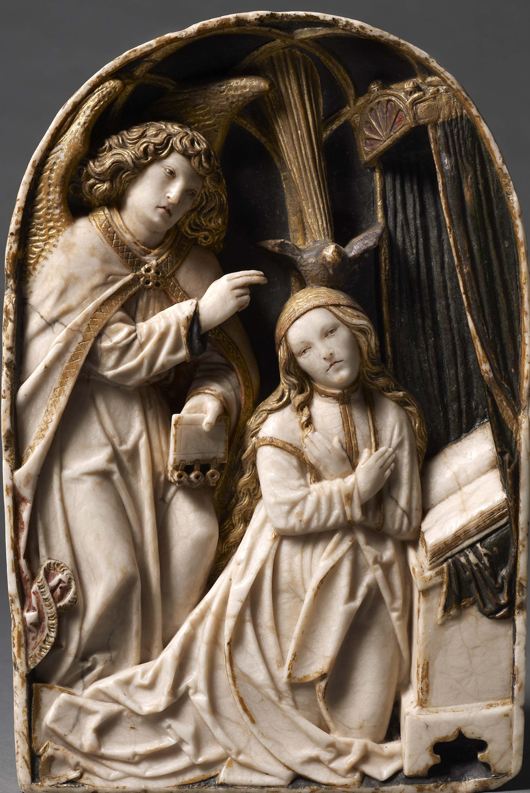 ‘The Annunciation,’ a newly discovered 16th-century alabaster relief by the German sculptor and woodcarver Tilman Riemenschneider, dating from 1515-1520, which will be exhibited by Daniel Katz Ltd. of London at the TEFAF fair in Maastricht in March. Image courtesy Daniel Katz Ltd. and TEFAF.

which will be on the stand of sculpture specialist Daniel Katz Ltd. Titled The Annunciation, and dating from 1515–1520, the work was intended for private devotion and is thought to be unique.

Also showing at Maastricht will be London furniture dealers Mallett who this month moved from their old premises in New Bond Street to take up residence in the period elegance of Ely House in Dover Street in Mayfair. 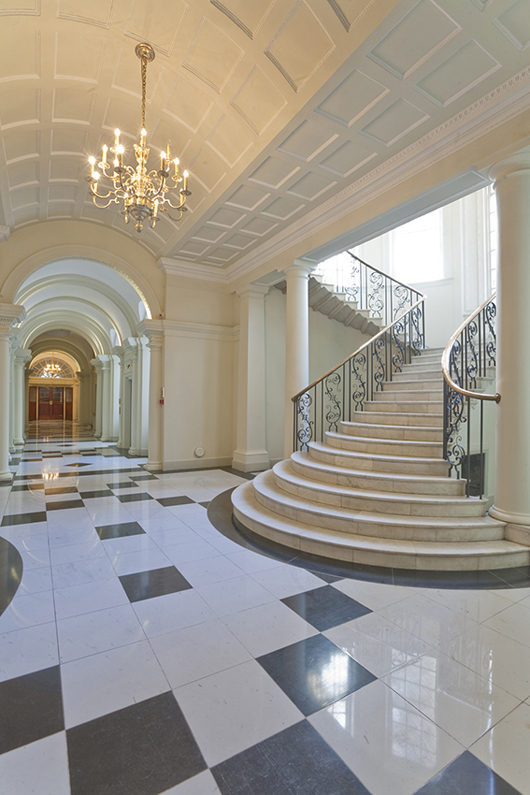 The building is the former London palace of the Bishop of Ely and was built between 1772 and 1776. Whether this opulent new home will help Mallett’s business improve remains to be seen. Skate’s Art Market Research analysts recently reported that the firm has been “losing money consistently since 2008,” which led to Swedish investor Peter Gyllenhammar taking a 23 percent stake in 2011.

Finally, if British Prime Minister David Cameron were in need of something to sweeten his public image, what could be better than a miniature version of his official London residence, 10 Downing Street, made entirely out of sugar cubes? 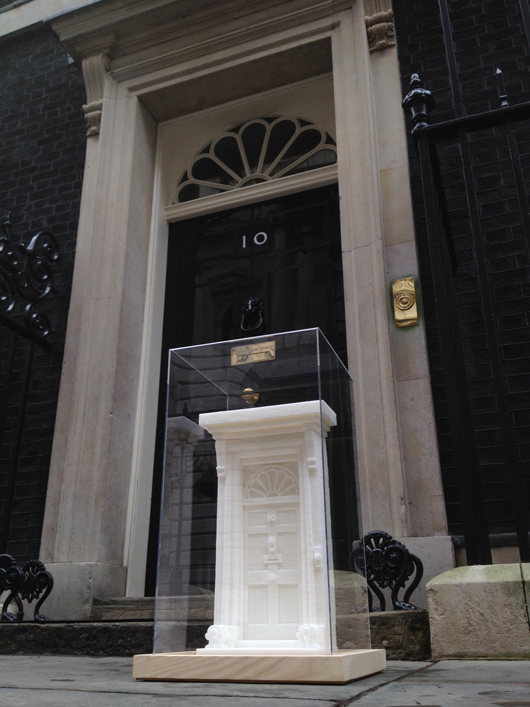 One lump or a hundred and twenty-two? This miniature sculpture of the British Prime Minister’s official London residence — No. 10, Downing Street — by British artist Brendan Jamison is part of an exhibition of British craft and design currently on display at No. 10. Image courtesy of Brendan Jamison.

This is the work of British sculptor Brendan Jamison whose sculptures in sugar have been attracting huge interest in recent months. His model of the prime minister’s home is included in an exhibition of the best in British craft and design currently on display at 10, Downing Street.