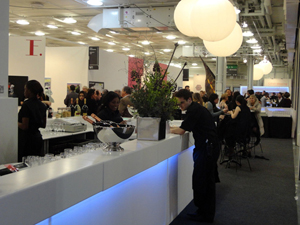 Vistors pause for refreshment at one of the many coffee and champagne bars at the private view of ART14 London at the Olympia Grand Hall on Feb. 27. Image Auction Central News.

LONDON – There is a new kid on the art fair block and all the signs are that ART14 London may be reaching the parts that Frieze, thanks to its somewhat élitist exclusivity, cannot reach. Although in only its second year, ART14 London is already beginning to feel like a mature and confident event. There was a genuine sense of occasion at the VIP private view on Thursday, with professional footballers, A-List artists and celebrity chefs among those strolling beneath the great arched ceiling of the Olympia Grand Hall. Food, music and other forms of entertainment were high on the agenda this year in recognition that the modern fair visitor needs an occasional pause in the wall-to-wall contemporary art.

Art14 London hosted no fewer than 182 galleries from 42 countries, making it one of Europe’s largest contemporary art events, combining art with performance, music, fine dining and celebrity spotting. We came across artist Liliane Lijn performing one of her now famous poem game with a group of willing participants. 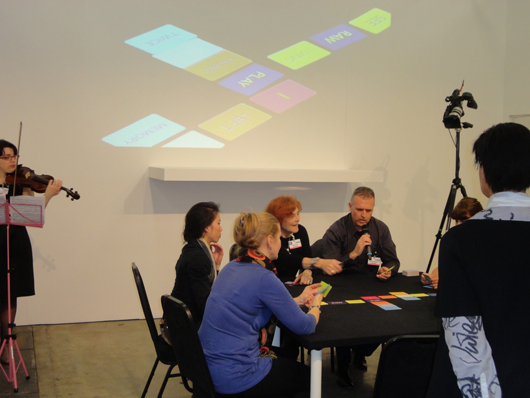 Meanwhile, by way of contrast, there were more Rolls Royces parked outside than you could shake a stick at, confirming how contemporary art fairs have become an essential port of call for every self-respecting High Net Worth Individual in London. 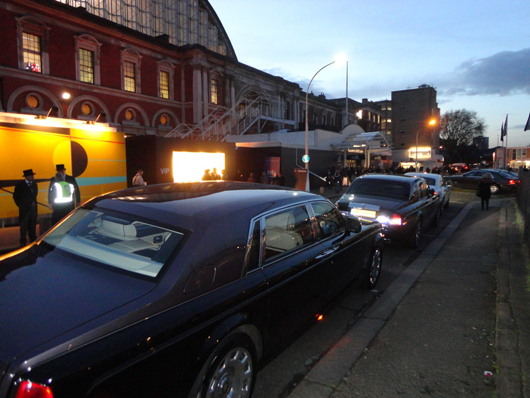 One might imagine that the exhausting preparations for such a mammoth event would leave its organizers on the verge of collapse, but ART14 London director Stephanie Dieckvoss was positively glowing and energized at the private view, stopping to chat to Auction Central News between a string of TV interviews. 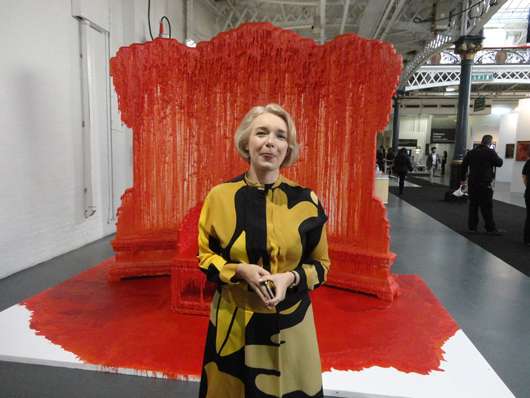 “Our exhibitors have been incredibly positive and enthusiastic this year,” Dieckvoss told London Eye. “Many more of them have built additional storage space into their stands so that they can replenish stock as works sell. That’s a real indicator of how optimistic and well-prepared everyone is this year. It’s very exciting and once you start to wander around you’ll quickly see how truly international it is, with galleries from across the globe, from Africa, Eastern Europe, Asia and South America.”

The strong Asian flavor was one of the most noticeable features of this year’s fair. Around 30 galleries from Taiwan, China and South Korea were exhibiting, but that was not the only sign of Asia’s growing influence in the contemporary art field. Many British and European mainland galleries were exhibiting work by Asian artists in acknowledgment of the burgeoning global demand. 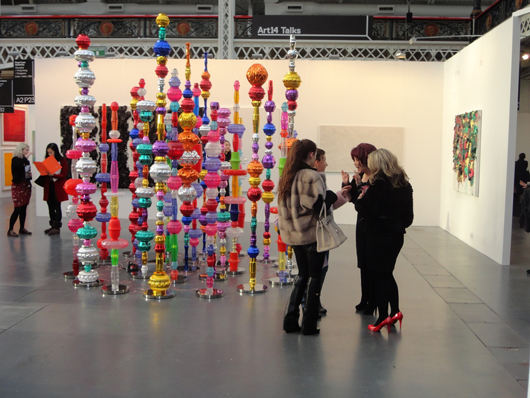 London gallery Edel Assanti, for example, were showing interesting collage-based paintings by London-based artist Gordon Cheung who expressed delight that his work was getting such prominent international exposure. 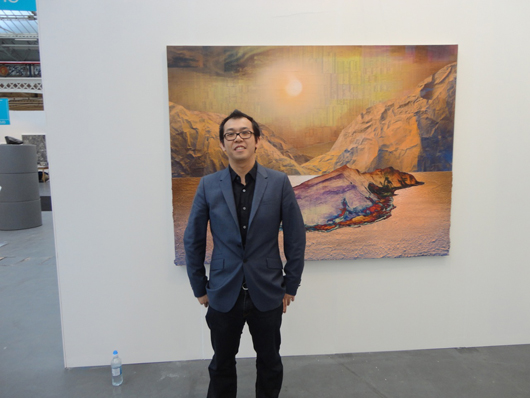 London-based artist Gordon Cheung with one of his large collage-based works on the stand of London dealers Edel Asanti at ART14 London. Image Auction Central News.

He thinks ART14 London is now a top event at which to show, particularly since Frieze shifted its emphasis. “When they took the Modern Masters away from Frieze and gave them their own fair it was like draining the canal,” he told Auction Central News. “You used to come across stands showing Lucian Freud or Bacon. But then they removed them to Frieze Masters and it left all that contemporary art with nothing by way of contrast.”

There was no lack of contrast at ART14 London. Taiwanese and Korean galleries are now an important fixture of these London events and offer an opportunity for Western collectors to learn about what is selling in Taipei, Seoul and further afield. London art market student Eunhee Park was helping out on the stand of Arario Gallery of Seoul, which was showing at the fair for the first time. She said the gallery was optimistic about entering the European market. A similar message came from Hye Won Keum, director of SoSo Gallery in Gyeonggi-do, South Korea. She was showing delicate wall paintings by the Korean painter Park Kiwon and a group of interesting works by the painter, potter and jewelry designer Kim Eull, who is widely respected in his home country. Some of the works had survived a devastating fire and had been rescued and restored by the artist.

London’s October Gallery has built an international reputation for showing innovative work by leading African artists and others from what they describe as the “Transvangarde.” Prominent on their stand was a bottle-top wall hanging by Ghanaian artist El Anatsui and a group of the signature petrol can masks by Romuald Hazoumé of the Republic of Benin. 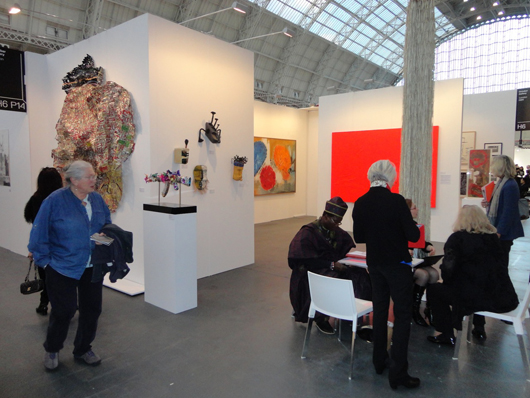 Hazoumé was also the creator of one of the fair’s most impressive large-scale installations, the cruelly punning Rat Singer: Second only to God! of 2013. This consisted of an enormous circle of petrol cans surrounding an up-ended boat, which provided a balcony for the eponymous “Ratzinger,” a crooning rodent in dark glasses. 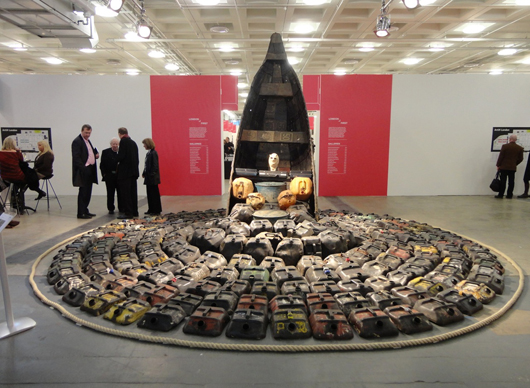 Art and antiques fairs are now proliferating across the globe and barely a month goes by in the UK without at least one fair opening somewhere in the capital or the provinces. Whether ART14 London will succeed in reinvigorating the London art fair scene remains to be seen since this is becoming a bewilderingly crowded field. However, the range of activities, the blend of educational and recreational diversions and the broad expertise of its international board of advisors promise it a bright future. Encouragingly, this fair seems to be about something different from today’s prevailing preoccupation with art as an asset class. This feels like a fair about collecting and keeping as opposed to collecting and flipping for a profit. We spotted the prominent millionaire collector Frank Cohen, often dubbed the “Saatchi of the North,” deep in conversation on the stand of London-based Modern British dealers Austin Desmond.

Finally, one of the more interesting features of this year’s fair was the use by some artists of various forms of technology. One of the most memorable of these was the work of Chinese artist Yang Yongliang. Trained as a calligrapher with the famous master Yang Yang from Shanghai, Yang today fuses his skill as a brush painter with digital technologies. The result are intriguing works such as his The Day of Perpetual Night which was showing on the stand of Galerie Paris-Beijing. This animated four-panel photographic work combines the iconography of traditional Chinese landscape painting with modern urban imagery to create an amusing futuristic narrative of moving waterfalls, motorways and flying spaceships. 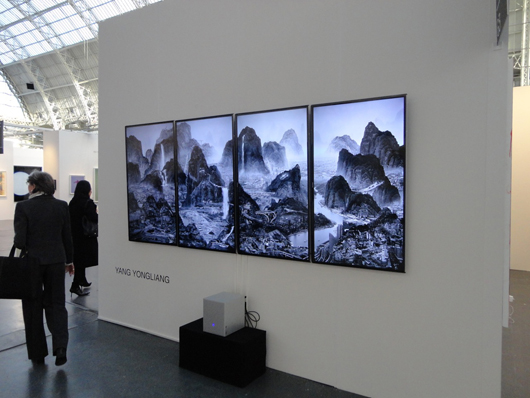 It was difficult to drag oneself away as new animated details continually emerged from the mountainous landscape.

So, what’s next on the London art fair merry-go-round? Well, the annual British Antique Dealers’ Association fair, the BADA Fair, takes place in Duke of York’s Square in the heart of Chelsea from March 19-25. Auction Central News will be there to test the temperature of this more traditional sector of the London art trade. Among the highlights is a fine and rare late-17th century South Indian or Ceylonese ebony armchair, provenanced to Longleat House in Wiltshire, which will be on the stand of Jermyn Street fine furniture dealers Harris Lyndsay. 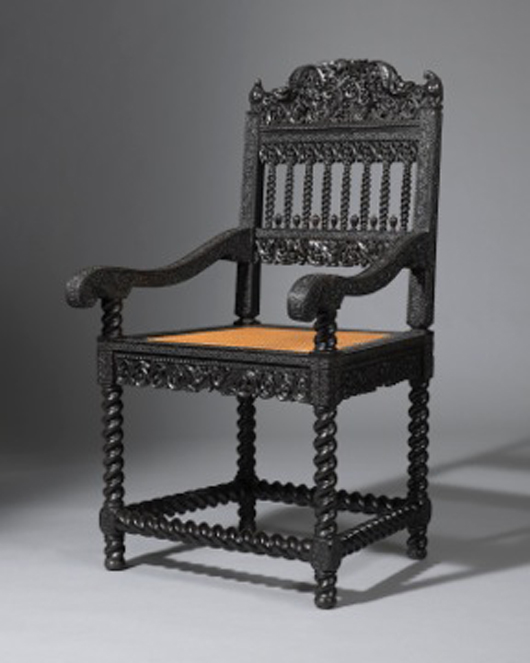 This late-17th century South Indian or Ceylonese ebony armchair will be on the stand of Jermyn Street fine furniture dealers Harris Lyndsay at the BADA Fair in Chelsea from March 19-25. Image courtesy Harris Lyndsay.