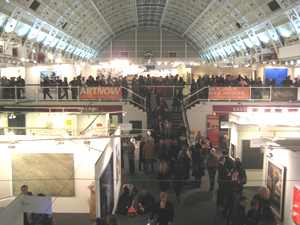 The London Art Fair opened this week, with sizeable crowds flocking to the opening night, despite freezing temperatures. Photo ACN.

London may still be in the grip of the harshest winter since 1963, but this week brought further signs that the art market may be finally emerging from the chill of recession. That said, it is conceivable, given the icy temperatures outside, that the crowds flocking into the Business Design Centre in Islington for the private view of the London Art Fair were attracted more by the promise of complimentary Jack Daniels cocktails than by the art on display. But alongside the red noses were quite a few red dots, so perhaps lethal bourbon cocktails did the trick in persuading punters to purchase pictures. 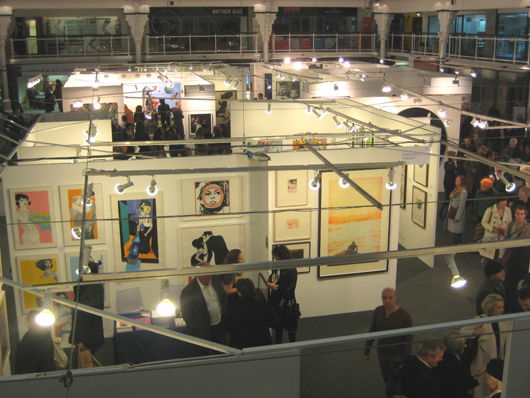 The recession seemed a thing of the past judging by the number of visitors at the opening night of the London Art Fair. Photo ACN.

Gallerists were optimistic for the week ahead. “We didn’t have a recession; we had our best year ever in 2009,” said Sarah Goldbart of Millennium Gallery, a Cornwall-based contemporary art dealership. “This is always a really good fair for us where we do a lot of business.”

Millennium is typical of the sort of art business that has surfed ahead despite the troubled economic undercurrents, largely thanks to a roster of active corporate clients and super-rich collectors such as Princess Firyal of Jordan. One of Millennium’s most sought-after artists is Cornish sculptor Simon Allen whose meticulously crafted wall-mounted and free-standing sculptures covered in gold and silver leaf are finding homes in a variety of up-scale locations. 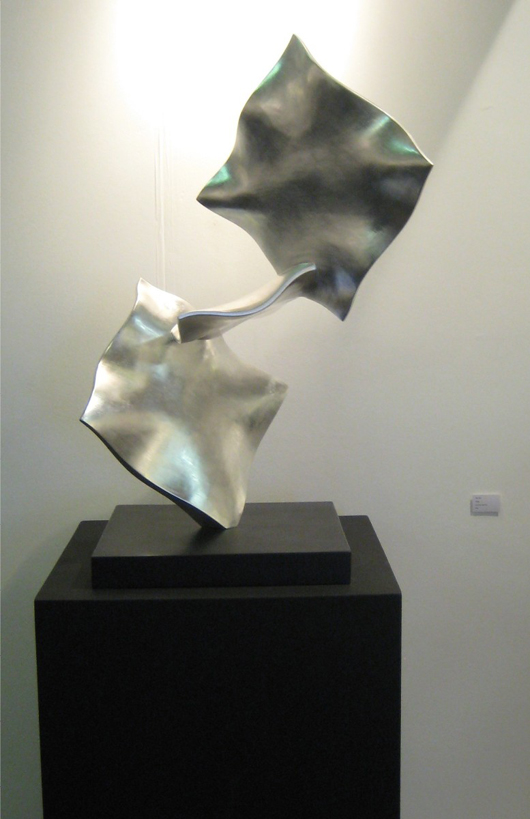 Work by sought-after contemporary sculptor Simon Allen was on the stand of Millennium Gallery at the London Art Fair this week. Photo ACN.

Goldbart said, “We sold several of Simon Allen’s pieces to the Connaught Hotel in London, which is being refurbished, while other works by Simon have sold to Lloyd Dorfman, founding chairman of Travelex, and to Russian billionaire Roman Abramovich who has ordered two of Simon’s sculptures for his new super-yacht, the Eclipse, currently under construction.”

Another gallery that has weathered the economic maelstrom is Eyestorm, the online retailer of limited edition prints. Eyestorm is owned by and, curiously enough, based in the offices of, the London Mayfair-based private equity and hedge fund group Duet Partners. That robust source of funding helped Eyestorm to a successful debut outing at the Scope Fair in Miami this year, according to Angie Davey, who looks after Eyestorm’s Artist Liaison department. There was plenty of activity on their stand at the London Art Fair, where British celebrity artist and TV comedian Vic Reeves was showing his recent paintings, and Eyestorm-published limited edition prints to his showbiz friends.

Away from the glitzy glamour of contemporary art, the rather sedate museum world has supplied some of the more noteworthy news items this month. Last week, the Victoria and Albert Museum opened its new Medieval and Renaissance galleries to universal acclaim. It seems only a short while ago that the museum’s superb collection of Renaissance treasures were crammed into a singularly unprepossessing corridor adjacent to the cafeteria at the rear of the building. Now, however, those dark ages are behind us and this world-class collection has taken up residence in a beautifully refurbished new wing.

In contrast to the fashionable tendency to focus on thematic display, the new galleries have placed the emphasis on history, providing a clear chronology from what used to be called the Dark Ages – but which emerge here as surprisingly sophisticated and enlightened – to the Renaissance. Those familiar with the collection will be thrilled to see their old favorites subtly lit and enjoying acres of space. 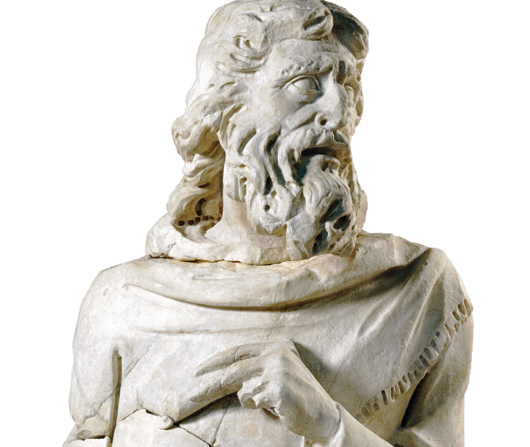 talian sculpture Giovanni Pisano depicted the prophet Haggai in Carrara marble circa 1285-1297. It is on view in the Victoria and Albert Museum’s new Mediaeval and Renaissance galleries. Image courtesy V&A Images. 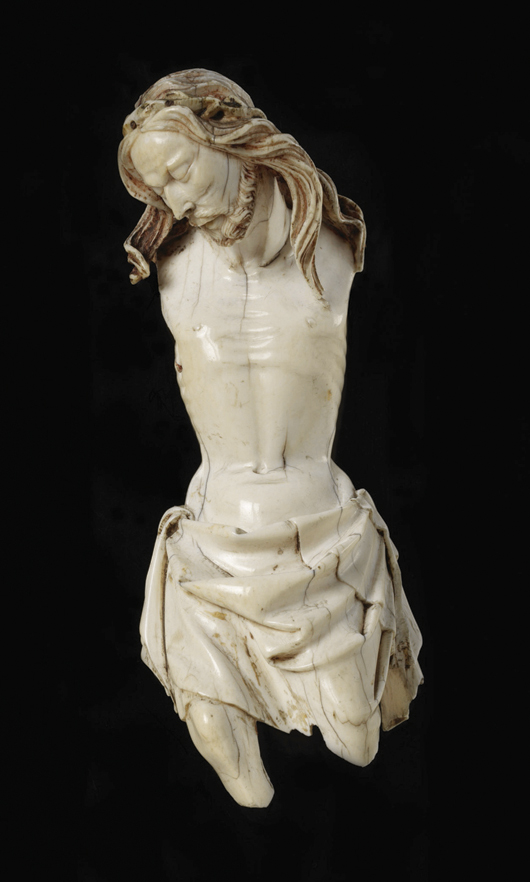 This tiny ivory figure of the crucified Christ from the Victoria and Albert Museum’s collection, will be on display at the museum’s new Mediaeval and Renaissance galleries. Image courtesy V&A Images. 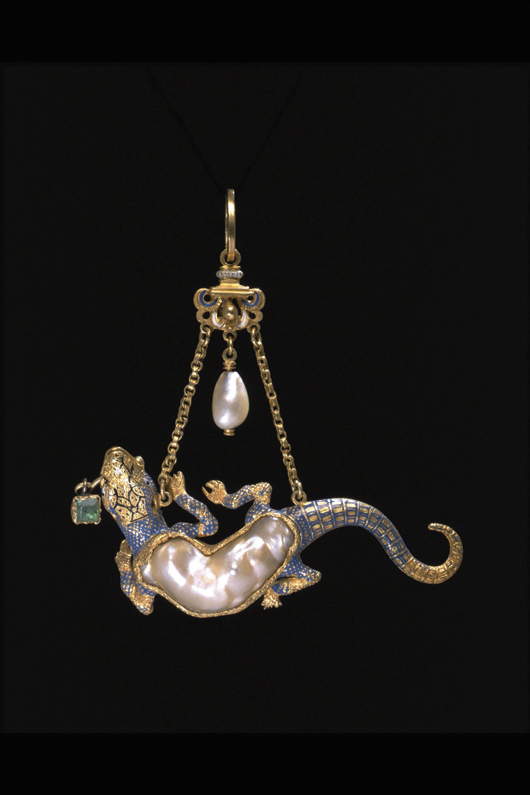 This 16th-century enameled and gold pendant in the form of a salamander is on display at the Victoria and Albert Museum’s refurbished Mediaeval and Renaissance galleries. Image courtesy V&A Images.

The galleries also contain plenty of computer terminals giving access to the collection in digital form. The new galleries represent another significant step in reaffirming the V&A’s status as one of the greatest museums in the world. The museum may have missed out on its daring Liebeskind extension that never happened, but instead it has forged ahead with new glass galleries, refurbished ceramics galleries, a marvelous sculpture display and now the impressive new Medieval and Renaissance galleries. Taken together these add up to a major achievement for director Mark Jones.

It is not only in London that the V&A is reasserting itself. It was announced this week that the Scottish city of Dundee is to get its own Victoria & Albert Museum. The “V&A at Dundee,” as it is being described – a £47 million research center and exhibition venue – is scheduled to open in 2014 on a site south of Craig Harbour in Dundee’s redeveloped waterfront. An international architecture competition will be launched for the new building, which will enable the London V&A to share its collections and will also be home to specialist collections of Scottish contemporary design. The project is expected to bring 500,000 extra visitors to Dundee, while creating up to 900 local jobs.

Antiques fair organizers up and down the country will be praying for an end to the snow and freezing temperatures that have dogged the UK in recent weeks. Travel has been particularly difficult with transport authorities recommending people make only “essential journeys.” Visits to antiques fairs surely qualify as such. One group who will be keeping their fingers crossed for an upturn in temperatures are the 25 exhibitors hoping to show at the Tortworth Court Antiques and Fine Art Fair at the Tortworth Court Four Pillars Hotel in Wotton-Under-Edge in the Cotswolds on the weekend of Feb. 26-28. 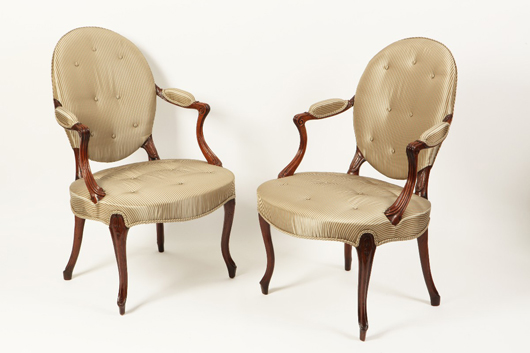 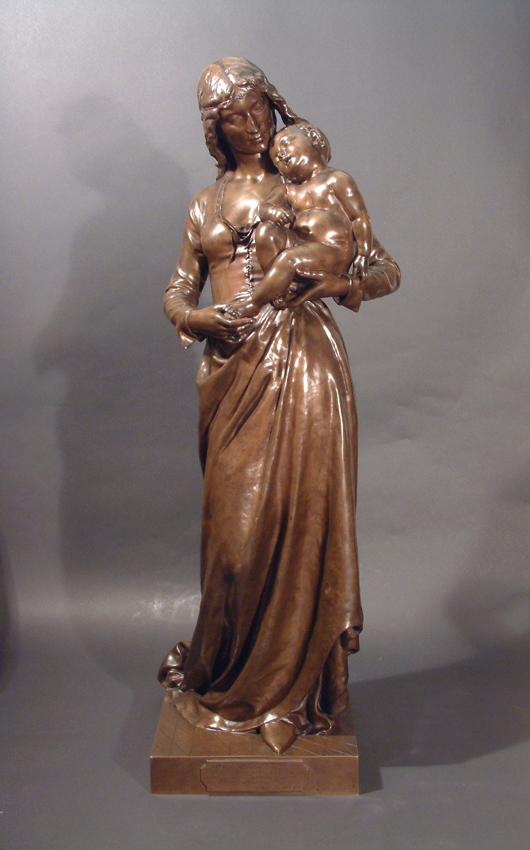 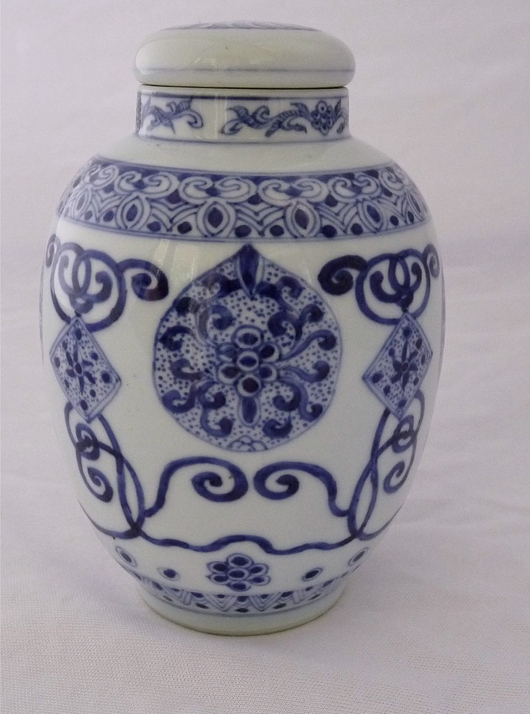 Catherine Hunt Antiques will be offering this rare Kangxi blue and white lidded jar with European and Buddhist designs, circa 1700, at £1,950 ($3,200) at the Tortworth Court Antiques and Fine Art Fair on Feb. 26-28. Photo Antiques Dealers Fair Ltd.

It has become fashionable to hold antique fairs in spa hotels in the hope of encouraging dealers to combine business with pleasure. The Tortworth Court Four Pillars Hotel, which has its own leisure center and gym, is set in 30 acres of private parkland. If that’s not enough to coax collectors out of their winter lethargy, perhaps they’ll be attracted by the rarities on offer at the fair. 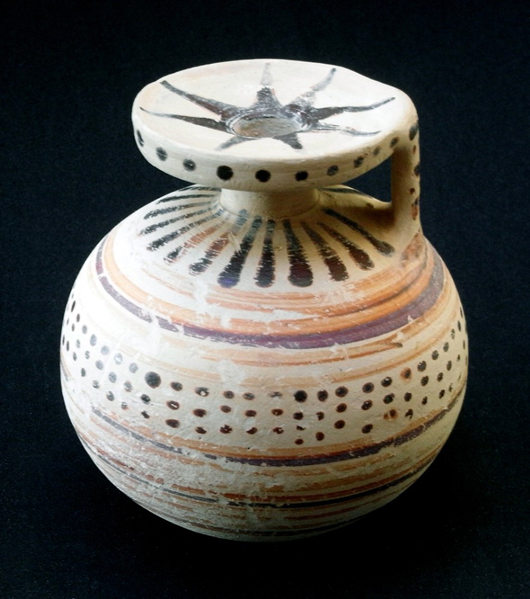 At the Chester Antiques Fair on Feb. 11-14, Alan Dawson of Odyssey will be showing this ancient Greek spherical pottery ‘aryballos,’ or olive oil container, priced at £250 ($405). Image Alan Dawson. 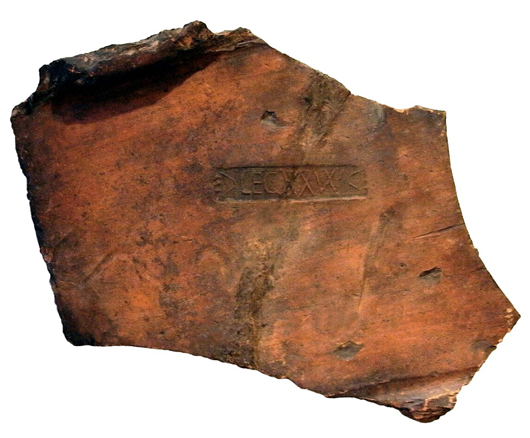 This large and impressive Roman military tile fragment bearing the stamp of the famous 20th Legion, which was stationed at Chester for nearly 200 years late in the first century, is for sale at £550 ($895) at Alan Dawson of Odyssey at the Chester Fair. Image courtesy Odyssey.

The same holds true for the Chester Antiques Fair to be held Feb. 11-14 at the County Grandstand at Chester Racecourse. Although eschewing the carnal luxuries of a spa hotel, the Chester event is nevertheless regarded as the premier event for collectors in the northwest and hosts more than 50 dealers from across the country, offering objects at all price levels from £50 to more than £20,000.

This year, the Chester event will feature a number of interesting ancient artifacts including a sixth century B.C. “aryballos,” or olive oil container, of the kind used in public baths in the ancient world. We are told this simple spherical pottery bottle was used for dripping oil onto the skin, which is then scraped off with a metal scraper. Slung from a string round the left wrist, it was the accepted way of cleaning the body in ancient Greece. This attractive and wholly intact antique version of soap-on-a-rope will be offered for sale by Alan Dawson of Odyssey at a perfectly accessible £250 ($405). 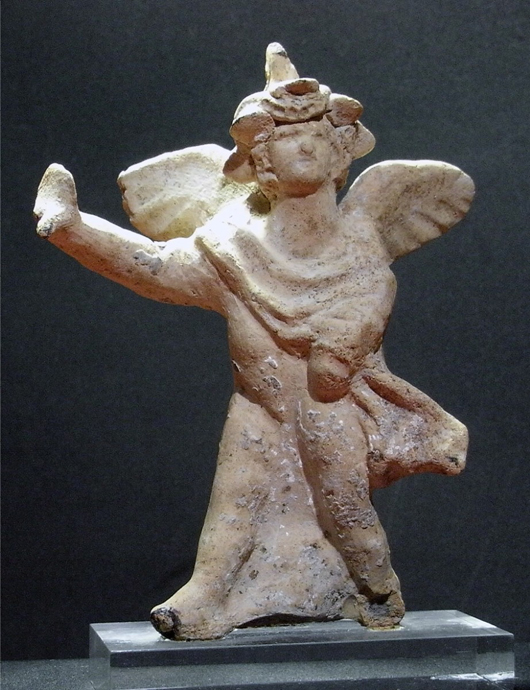 Alan Dawson will be showing this Greek terracotta ‘erote’ figurine at the Chester Fair. It is priced at £625 ($1,020). Image courtesy Odyssey.

And so to a couple of interesting items from the UK auction circuit. One might have assumed that the snowdrifts would impact on saleroom business down at West Country auctioneers Woolley & Wallis this month, but apparently not. These days, a bank of phones and some up-to-date Internet bidding technology is all that’s required to keep the bids coming in thick and fast.

Certainly this seems to have been the case in Salisbury with a fascinating and elaborate 18th-century wood and cut-paper maritime diorama, which was offered at Woolley & Wallis’s sale of works of art on Jan. 12. Featuring a fully rigged galleon complete with figures – including a hapless tar drowning in the briny – the appeal of this unusual item was further enhanced by the fact that it was inscribed: “A. Walker Invt. et Fecit, 1763.” The hammer duly fell at £7,500 ($12,200). 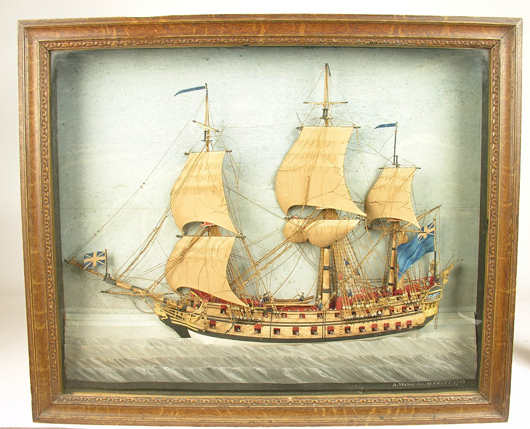 This 18th-century wood and cut-paper diorama fetched £7,500 ($12,200) at Woolley & Wallis’s January sale of furniture and works of art in Salisbury. Image Woolley & Wallis.

Finally, Woolley & Wallis are also poised to offer a very fine quality and prestigiously provenanced piece of English silver in the coming weeks.

William Beckford is arguably the most illustrious collector of the 19th century, turning his home at Fonthill Abbey in Wiltshire into a kind of Gothick Wunderkammer, a camp citadel crammed with all manner of precious objects.

Among the treasures he accumulated over many years of insatiable and eclectic collecting was a pair of silver-gilt waiters decorated with strapwork and a range of heraldic motifs incorporating the famed Beckford arms. Closely resembling a large sideboard dish in the Victoria and Albert Museum’s collection, and by the same maker, the silversmith William Burwash, the waiters are estimated to make £15,000-£20,000 ($24,400-$32,500) on Jan. 27, reflecting their provenance to Beckford and Fonthill. 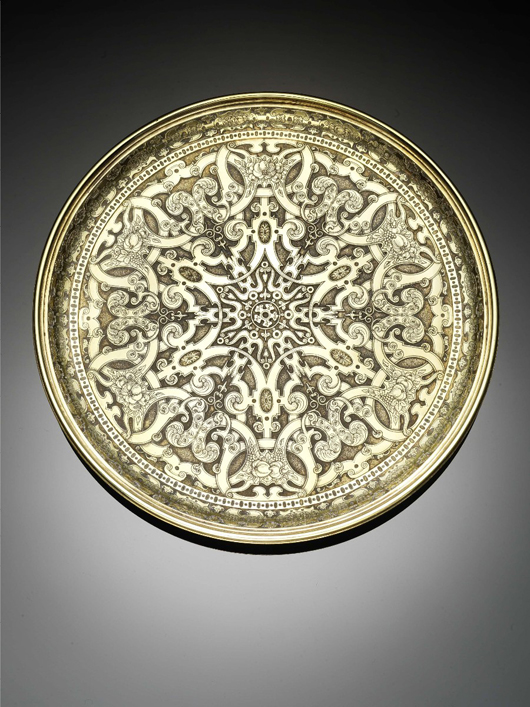