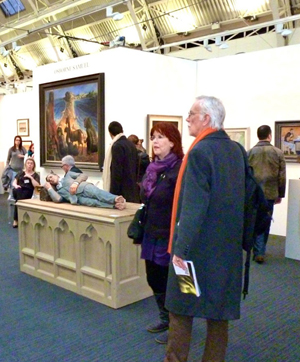 The stand of London Modern British dealers Osborne Samuel at the London Art Fair, with Sean Henry’s bronze Man Lying on His Side (2000) in the foreground. Image: Auction Central News.

It matters little whether you prefer the original French term or the English version, either way Droit de Suite, or the Artists’ Re-Sale Rights levy, will become more than just a mouthful to the UK art trade in 2012.

In January 2006, Britain was brought into line with the majority of other European Union member states when UK art dealers were forced to pay a levy on the resale of works of art by living artists. This was intended to “harmonize” tax laws among EU member states. Instead it struck a discordant note among those lobbying to protect London’s status as an important center of the international art trade.

In 2012 the levy will be extended to benefit artists’ heirs for up to 70 years after an artist’s death. Many dealers see this as likely to deliver yet another wounding blow to the secondary market in the UK. With China’s art market accelerating rapidly, the development is seen as singularly unwelcome.

Quite what impact the levy extension will have on annual events such as the London Art Fair remains to be seen. This year’s instalment of the fair took place at the Business Design Centre in Islington last week. Auction Central News visited on the final day to take the pulse of the market. 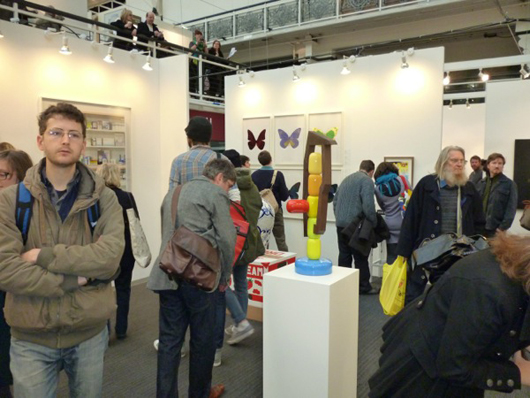 Visitors flock to the stand of Damien Hirst’s gallery ‘Other Criteria’ at the London Art Fair in Islington in January, but most dealers reported slow trade compared to previous years. Image: Auction Central News.

Asked about the likely impact of the extended levy, one prominent London dealer told us, “No question but that this will have an effect. On January 1st, all the modern dealers had to put their prices up by 4 percent, and this, in a tough buyer’s market, is not a very bright idea. Collectors don’t understand it, so don’t want to pay it. Rich artists get richer, poor artists get little or nothing. It also has a negative effect all round, so perhaps no coincidence that secondary market sales at the London Art Fair did not appear to be strong.”

It was clear from talking to other exhibitors that even without further bureaucratic impediments, the recession is biting. The organisers of the London Art Fair claim that the 25,000 people who visited this year represents the highest attendance figures in the fair’s 24 years of operation. However, that didn’t seem to translate into sales.

Gordon Samuel, a director of London dealers Osborne Samuel Ltd., who specialize in the top end of the Modern British market, said the fair had certainly been busy, with visitor numbers steady throughout the week, but that business had been slow. Nevertheless he was positive. “It’s always a worthwhile fair for us because we do business with other members of trade,” he said, “but with the public feeling the pinch one can’t expect as much activity from private buyers as we’ve had before.” 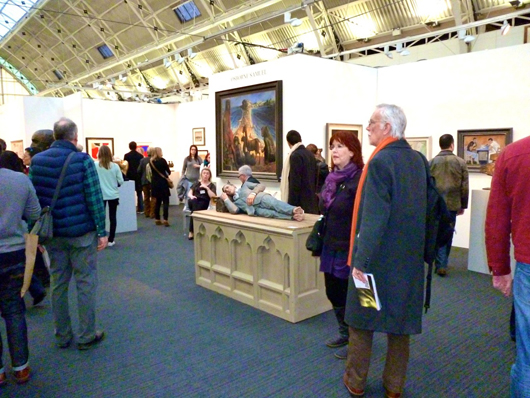 The stand of London Modern British dealers Osborne Samuel at the London Art Fair, with Sean Henry’s bronze Man Lying on His Side (2000) in the foreground. Image: Auction Central News.

One sector of the market that seemed to be bearing up was that of affordable contemporary prints. Dealers such as Tag Fine Arts and Eyestorm, both of which offer low- or mid-priced limited editions, as well as original works in the category now generically termed Urban Art, seemed to have had a reasonably encouraging week. “We’ve seen a lot of sales across the board,” said Angie Davey of Eyestorm, citing particular interest in prints and paintings by Danish artist Henrik Simonsen. 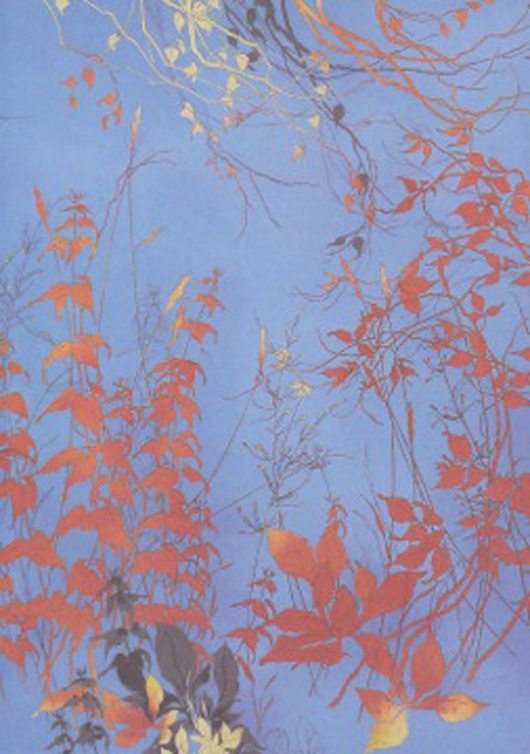 Hannah Shilland of Tag Fine Arts echoed that positive summary of the week’s business. “We’ve sold quite a bit and seen a lot of interest from new customers,” she said.

Over at the Decorative Antiques & Textiles Fair in Battersea Park a couple of days later, mixed messages were again to be heard from the assembled trade. 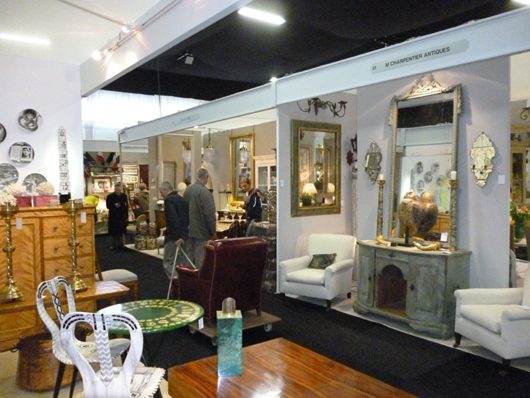 Business was slower than previous years at the winter Decorative Antiques and Textiles Fair in Battersea Park, although some dealers reported some encouraging sales given the prevailing economic climate. Image: Auction Central News. 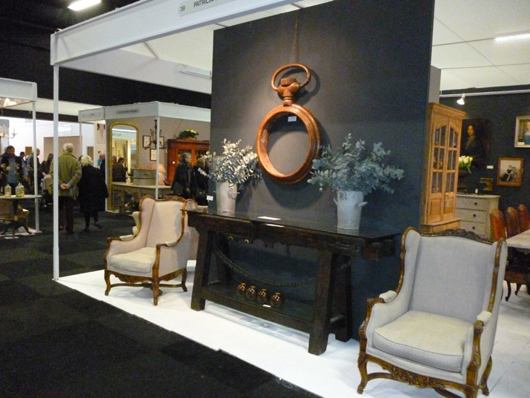 The stand of London decorative dealer Patricia Harvey at the winter Decorative Antiques and Textiles Fair in Battersea Park in January. The giant carved wood pocket watch shop sign was priced at £2,800 ($4,400) and the old French industrial console table below it was on sale at £5,500 ($8,640). Image: Auction Central News.

Most dealers acknowledged the fair seemed to be well-attended but admitted that business was markedly slower than on previous occasions. Some sales were happening, however. Auction Central News witnessed a good deal of interaction between stand-holders and private buyers and saw two or three transactions being closed during the hour we were at the fair.

Oxfordshire dealer James Holiday showed us a large circular mirror enclosed in an impressive carved walnut heraldic frame, which had found a buyer at £2,600 ($4,100). “I had my best year last year,” he said, although he acknowledged that most of his business is with other members of the trade. “Some private buyers still have money and want to spend it,” he added. “Unusual items of real quality always sell well, although it’s getting more difficult to find really good things.”

If quality and luxury are the criteria that dealers most need to seek out, it will be interesting to see what kind of reception awaits the Luxury Antiques Weekend scheduled to take place Feb. 24-26 at Tortworth Court in Gloucestershire. The Cotswolds is one of the wealthiest regions of the country and so this fair, set in the Tortworth Court Four Pillars Hotel — a stylish country house nestled in 30 acres of private landscaped grounds — seems to be ticking all the boxes required to weather the economic downturn.

Twenty-two dealers from across the country will assemble over the three days, showing a diverse selection of decorative antiques and works of art. Recent market intelligence indicates that fairs of this kind are becoming the principle commercial focus for the trade. Wealthy private individuals increasingly view up-market fairs as an opportunity to view a broad range of objects under one roof without the inconvenience of trekking from shop to shop in towns and villages. Typical of the kind of decorative and traditional objects that will be on offer at the Tortworth fair is a set of three Russian enamel beakers priced at £950 ($1,495) with Shapiro & Co., 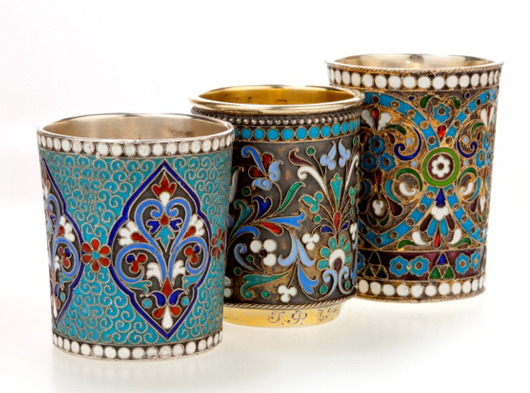 and a French Empire ormolu mantel clock surmounted by a bronze classical figure, on the stand of Richard Price Antique Clocks.

And so to one or two fine art events of interest taking place in and outside London in the coming weeks. One show likely to prove a magnet for admirers of the late Lucian Freud is an exhibition of fascinating photographs of Freud at work and at rest in his studio taken by photographer David Dawson, which will be on display at London dealers Hazlitt Holland-Hibbert’s gallery at 38 Bury St. from Jan. 30 until March 2.

Lucian Freud: Studio Life features photographs taken by Dawson over a 12-year period and throughout the final years of Freud’s life (the artist died in July 2011, aged 88). As well as now familiar images of Freud with his friend and fellow painter David Hockney 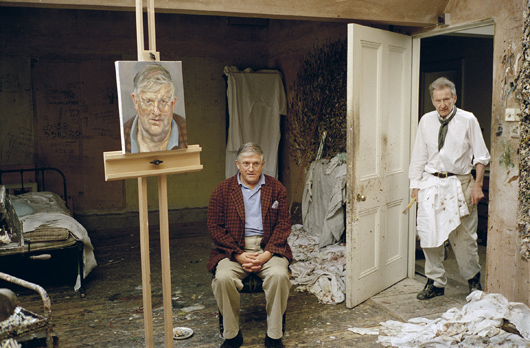 (whose own Royal Academy show opens this week), the exhibition includes tender images of the artist with friends and sitters such as Kate Moss (although on this occasion she is not sitting but rather lying in bed, cuddling the great man himself). 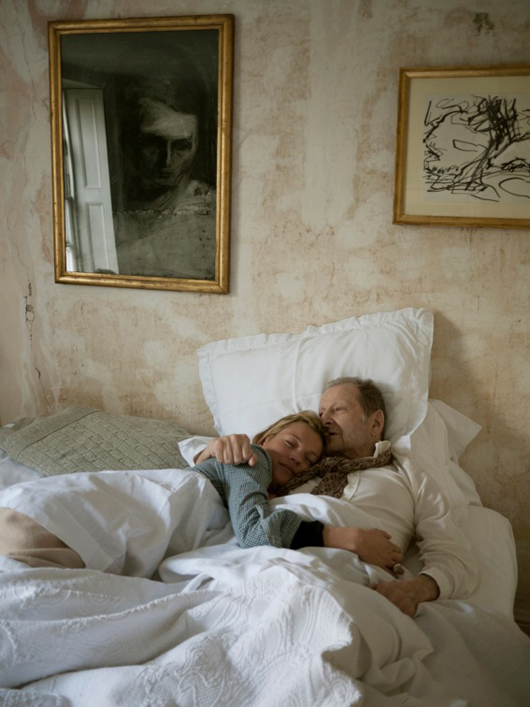 Freud was known as an obsessively private person and so the exhibition throws a rare and revealing light on the more intimate aspects of his life and work. It coincides with an exhibition of Freud’s portraits on view at the National Portrait Gallery from Feb. 9 until May 27.

Finally, a colorful, bright and breezy exhibition to dispel the wintry gloom that descends at this time of year. “Drawn to the Landscape” at the Jerram Gallery, Half Moon Street, Sherborne, Dorset from Feb. 18 to March 3 features new work by three British women artists — Carry Ackroyd, Emma Dunbar and Fiona Millais. All three artists share an optimistic view of English country life, making this an appropriate joint showing of their work. Carry Ackroyd’s Kites wheeling over a patchwork landscape; 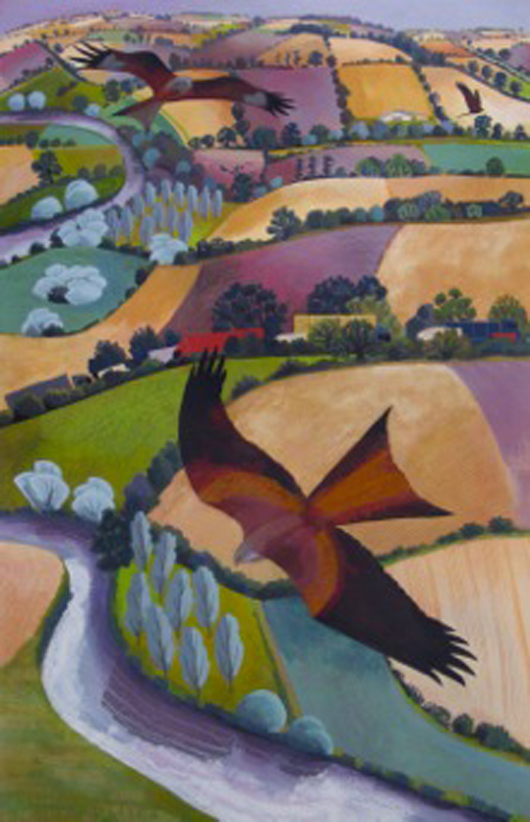 The exhibition ‘Drawn to the Landscape’ at the Jerram Gallery, Sherborne, Dorset from 18 February to 3 March includes this acrylic on paper by Carry Ackroyd entitled Kites. Image courtesy Jerram Gallery.

and Fiona Millais’s Bullfinches pecking at berries on a tabletop 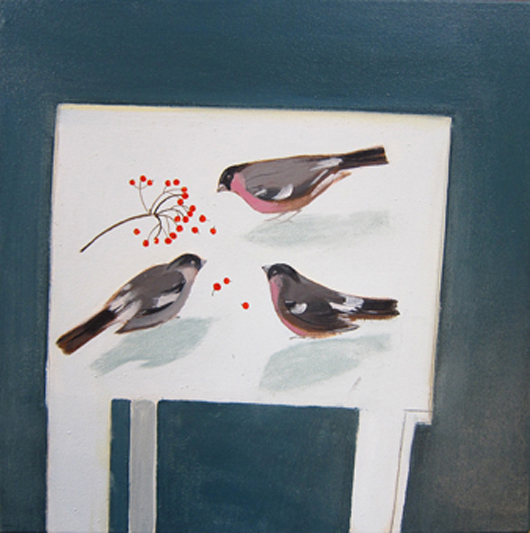 Fiona Millais’s acrylic on canvas Bullfinches, included in the exhibition ‘Drawn to the Landscape’ at the Jerram Gallery in Dorset from 18 February to 3 March. Image courtesy Jerram Gallery.

together offer a clear indication of the exhibition’s overarching rural theme. Millais happens to be the great-granddaughter of the pre-Raphaelite painter Sir John Everett Millais, a small biographical detail that will doubtless help generate interest in a lively group show that seems well-timed to help usher in some brighter spring weather.