The annual Watercolours & Works on Paper Fair, which began this week and continues until Sunday, Feb. 3, at the Science Museum in South Kensington. Image Auction Central News.

LONDON – The London Science Museum may not be the most obvious venue in which to hold an art fair, particularly since it is located directly opposite the Victoria and Albert Museum, which it would be reasonable to assume might be a more appropriate location. And yet the annual Watercolours & Works on Paper Fair, which began this week and continues until Sunday, seemed perfectly at home on the first floor of the Science Museum when we attended the opening day. It had been allocated its own space well away from the early steam engines, Apollo space capsules and other scientific exhibits that draw crowds of fascinated school children and families all year round.

Of course, it is in the nature of art fairs that once inside you are so distracted by the works on display that the broader environment seems to disappear. The Watercolours and Works on Paper Fair is a somewhat sedate event attracting an older demographic who appreciate its mix of the traditional and the acceptably modern (without too much of that curious stuff called Contemporary Art). Indeed it was so sedate that one visitor was seen snoozing happily on a vacant bench. 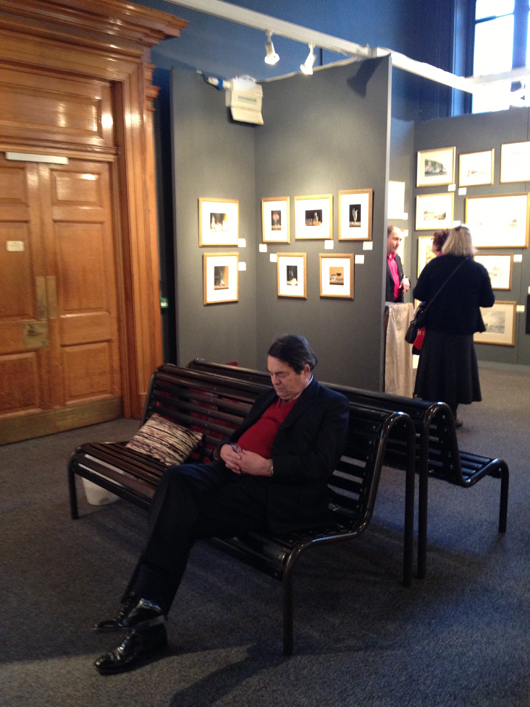 A visitor to the Watercolour and Works on Paper Fair at the Science Museum in London grabs some well-earned shut-eye. Image Auction Central News.

One of the more reliable ways to gauge how much business is being done at an art fair is to chat to the men who do the packing and wrapping. “It’s been nonstop since the fair opened,” said the man in the wrapping booth as he took a well-earned rest. 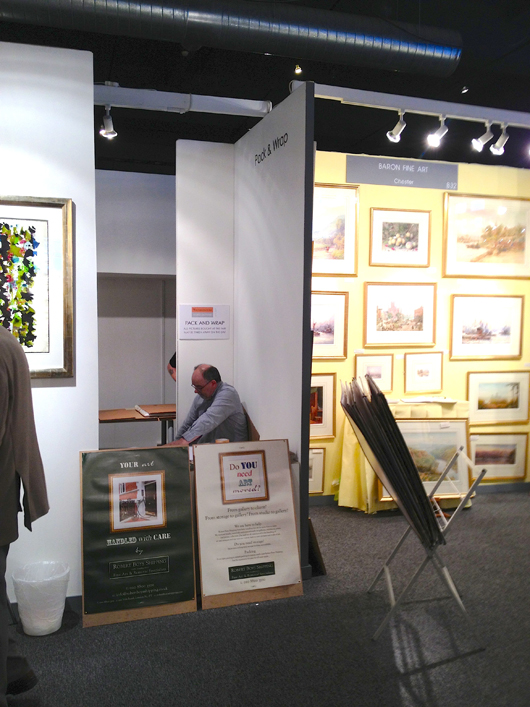 The wrapping booth at the Watercolour and Works on Paper Fair, which reported a steady dream of purchasers wanting its services on the fair’s opening day. Image Auction Central News.

“And it’s only the first day.” This was not, however, the message of all the dealers. London dealer Duncan Miller, who specializes in Scottish artists, said trade was slow. “It’s difficult. It has been for some time. You need a certain amount of luck at these events.” It was the first time Mr. Miller had shown at the fair but he was hopeful things would pick up. He had already sold one large mixed media work by the Edinburgh School painter Ann Oram. When we visited the stand on the opening day there was much interest in Oram’s Garden Still Life 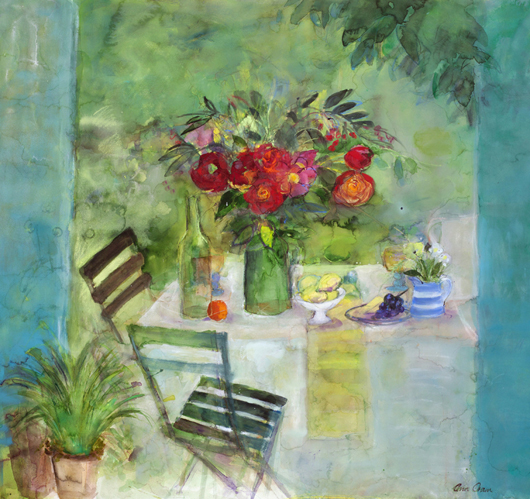 Elsewhere at the fair, London-based painter and printmaker Natasha Kumar was enjoying a lot of interest in her vibrant prints inspired by her travels in India. Her Artshouse stand, located at the entrance to the fair, was thronged with visitors admiring her Holy Cow screenprint series, examples of which were priced at £1400. 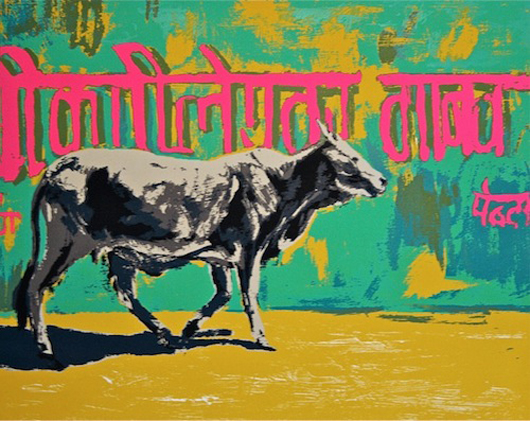 London-based printmaker Natasha Kumar was enjoying a lot of interest in her vibrant prints on her Artshouse stand at the Watercolour and Works on Paper Fair where she was showing this screenprint, ‘Holy Cow,’ priced at £1,400 ($2,215). Image courtesy of Natasha Kumar.

Turning to the UK auction circuit, Yorkshire-based LiveAuctioneers clients Tennants held another of their popular “Country House” sales this month, which included a few surprises. A pair of Italian walnut three-drawer chests had been estimated at just £300-400, largely on account of their seriously shabby condition. 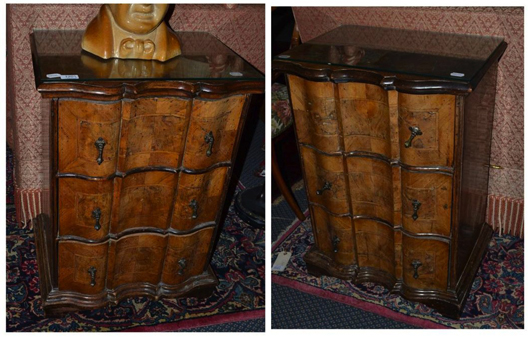 A pair of Italian walnut three-drawer chests which, despite being in dire need of restoration, attracted a bid of £3,200 ($5,050) at Tennants’ ‘Country House’ sale in Leyburn, Yorkshire in January. Image courtesy of Tennants.

The candid catalog description itemized their faded color, “various worm holes,” splits and missing handles, although on the plus side “the drawers operate well.” Clearly there was some work to be done, but they were unusual enough and showed sufficient potential for restoration to attract a bid of £3,200 ($5,050). Meanwhile, Tennants’ January sale of arms, armor and militaria included a rare Colt First Model Dragoon six-shot percussion revolver, with a New York City stamp, the cylinder bearing traces of an engraved Texas Ranger and Indian scene.

Coincidentally, the gun is at the center of another American-themed event in the coming weeks as the American Museum in Britain prepares to stage an exhibition entitled “Gangsters & Gunslingers: The Good, The Bad and the Memorabilia.” The exhibition, which runs from March 23 to Nov. 3 at the museum’s premises at Claverton Manor in Bath, has been loaned by Channel Islands-based Americana collector David Gainsborough Roberts. The exhibition’s theme centers on America’s outlaw heroes and brings together memorabilia from what the curators describe as “two defining chapters that shaped America’s national identity” — the Wild West from the mid-1860s to the late 1880s, and the wild years of the Prohibition/Depression era of the 1920s and early 1930s.

American visitors to the UK over the summer will have good reason to swing by the American Museum in Britain as they head down to the windswept beaches and rain-soaked holiday resorts of the West Country, for there are treasures galore on show. Highlights include the watch retrieved by souvenir hunters from the wrist of Clyde Barrow after he and Bonnie Parker had been ambushed and mercilessly riddled with bullets by federal agents. Clyde had not, perhaps, been wearing his bullet-proof vest that day, which features in the exhibition 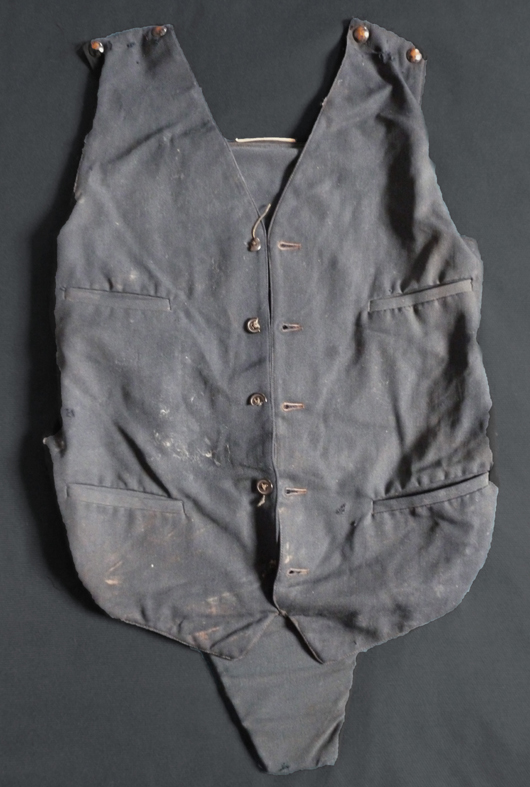 as does a silver cigarette case owned by notorious Chicago gangster Al Capone. 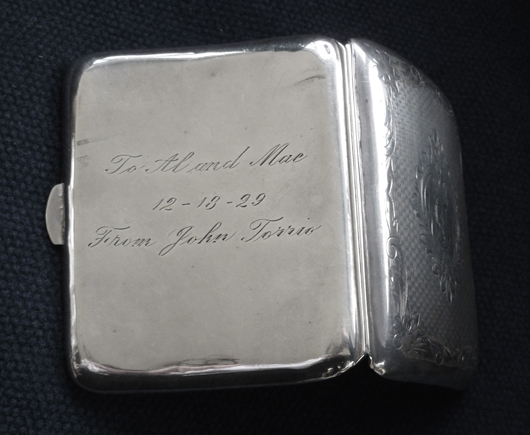 Rather more grisly is the death mask of Depression-era outlaw John Dillinger, which faithfully records the exit wound made by the federal agent’s bullet that killed him outside a Chicago cinema in 1934.

The next big event on the horizon for many of the more up-market members of the London fine art trade will be the European Fine Art Fair (TEFAF) in Maastricht from March 15 to 24. This is arguably the most prestigious fine art fair in the world and is generally regarded as one of the few fairs that, despite being obviously a commercial venture, places equal emphasis on the aesthetic aspect of art as on economic considerations. This year the fair will include a special loan exhibition of 15 drawings by Vincent van Gogh, loaned by the Van Gogh Museum in Amsterdam. 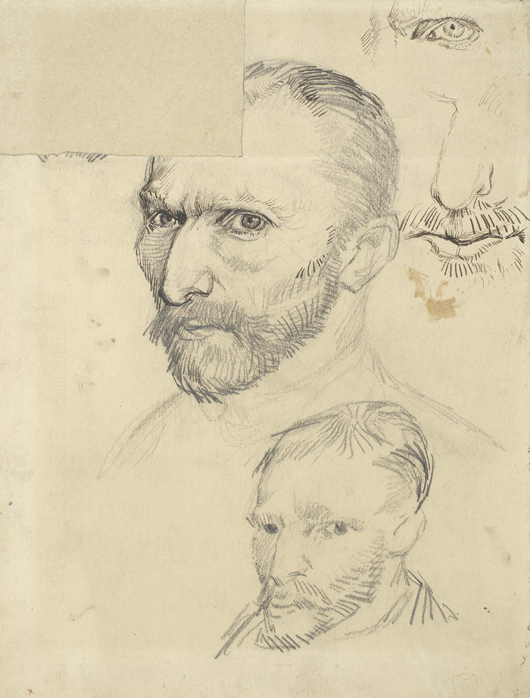 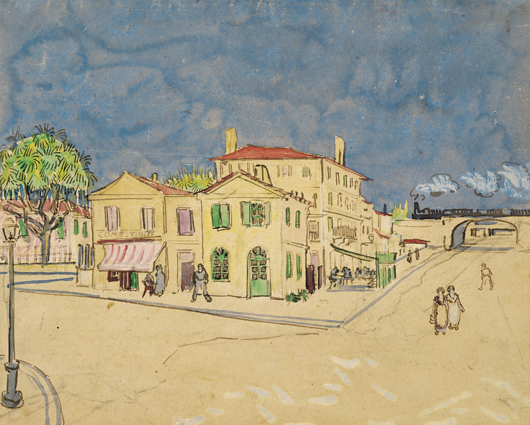 For those still concerned with the investment potential of fine art — an increasingly influential contingent in the rapidly globalizing art market — this year’s TEFAF opens with another important symposium on the state of the global art market. “Art Symposium: Rising Stars in the Art World” will be held at the fair on Friday, March 15, and will begin with a review of the global art trade during 2012, highlighting the contribution of the emerging economies of China and Brazil. Leading arts economist Dr. Clare McAndrew will present the findings of the latest TEFAF Art Market Report on these issues, which will be launched during this year’s fair. The second theme will be “Top performing artists: why they dominate the market and how they continue to do so.” One is unlikely to find slumbering visitors on the TEFAF benches.