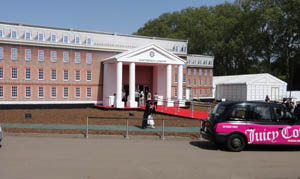 The mock-Georgian façade of the Masterpiece fair marquee on the south grounds of the Royal Hospital in Chelsea. The fair continues until July 4. Photo Auction Central News.

It is late June and London’s Masterpiece fair, now in its third year, has just opened on the south grounds of the Royal Hospital in Chelsea in an enormous marquee, the facade of which has been mocked up as a Georgian terrace.

The fair — which rose like a phoenix in 2009 from the ashes of the Grosvenor House Fine Art and Antiques Fair — is London’s attempt to match, or perhaps even outdo, The European Fine Art Fair (TEFAF) in Maastricht, which takes place annually in March. Both fairs have a similar ambience with the dealers’ stands located on wide avenues that open into spacious piazzas where visitors can take the weight off their Jimmy Choos over a glass of champagne. There is also a wealth of swanky restaurants, bistros and bars.

Like most fine art fairs today, Masterpiece’s target audience is the fast-expanding international community of High Net Worth and Ultra High Net Worth Individuals (HNWIs) seeking a safe harbor for their wealth. Fine art and other alternative assets are increasingly considered the most attractive way to diversify an investment portfolio. So, cheek by jowl with Old Master paintings and longcase clocks at Masterpiece there were stands selling Rolls Royce motorcars, 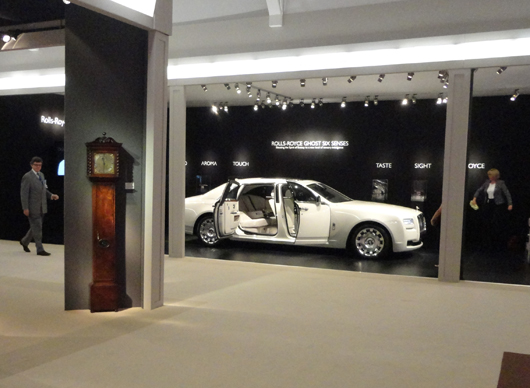 Ancient and modern — a long case clock stands opposite a Rolls Royce Ghost at the 21012 Masterpiece fair in Chelsea, London this week. Even the car’s trunk has a lambswool lining to ‘cosset’ custom luggage. Photo Auction Central News. 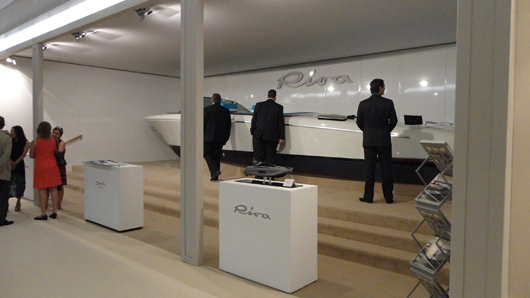 and gold-plated sculptures by Damien Hirst.

We cannot illustrate the Damien Hirst écorché figure that presides over the fair’s central champagne bar as we were prohibited from taking a photograph by two Gagosian Gallery shop assistants standing sentry nearby. They would not even disclose the asking price, such is the air of exclusivity surrounding Hirst and all his works. Discretion over prices extends to all classes of object at the Masterpiece fair. We asked the price of an exuberantly decorated rococo bureau by François Linke on the stand of London dealer Adrian Alan.

“The price is on application,” said the gallery assistant. “I’m sorry; I cannot even give you a ballpark figure.”

Despite the fair’s opulence and the air of breezy optimism issuing from the ancillary staff, the mood among the trade was somewhat downbeat when Auction Central News visited on the first day. The dealers we spoke to had sold nothing at the opening vernissage the previous evening but remained optimistic that business would improve as the fair progressed.

“Buying art is not exactly a priority in these recessionary times,” said London sculpture dealer Robert Bowman, who added, “We did well here in previous years and I’m sure we will again.” Bowman was showing major bronzes by Rodin alongside recent works by the internationally renowned American-born British sculptor Helaine Blumenfeld. 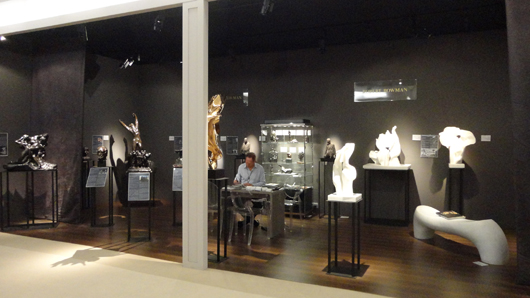 Two or three dealers lamented the fair’s late closing on the final day (July 4). “Why do we have to be open until 9 p.m. on Wednesday?” said one who asked to remain anonymous. “It smacks of desperation.”

Gaining entry to the Masterpiece fair can be like entering the Vatican’s inner sanctum, so security-conscious have the organizers of these luxury events become. Such caution is perhaps understandable as the start of the London 2012 Olympics gets ever closer.

One firm whose business is devoted to alleviating such anxieties in the fine art and culture sector is London-based Ecclesiastical Insurance who celebrate their 125-year jubilee this year. Clare Pardy, Ecclesiastical’s fine art and heritage underwriting manager, writes to tell us that their fine art portfolio has grown significantly as the art market has continued to bounce back from recession. Their specialist fine art team has expanded accordingly 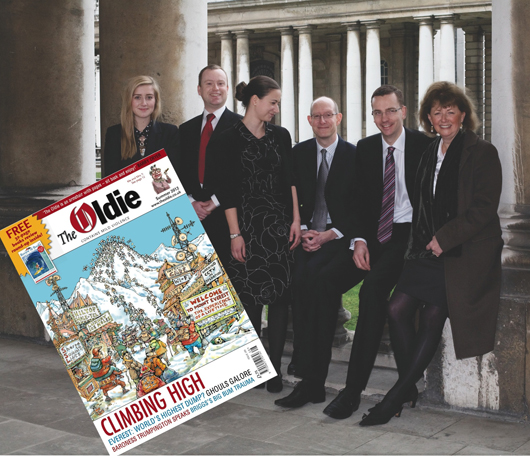 The specialist fine art team at Ecclesiastical Insurance, launched in 2008 just prior to the market downturn, has grown in recent years as the art market has steadily improved. This year, Ecclesiastical marks 125 years in business and to celebrate has launched the Oldie British Artists Award in conjunction with ‘The Oldie’ magazine. Image courtesy of Ecclesiastical and ‘The Oldie.’

since they started in the spring of 2008. Rather appropriately in this, their jubilee year, Ecclesiastical has teamed up with the popular magazine The Oldie

to recognise the achievements of British artists over the age of 60. This seems only fair given that most awards these days are focused on younger artists. A short list of 10 works will be chosen by the judging panel and the winner of the £5,000 Oldie British Artists Award (OBA) will be announced on Oct. 16 at the English Speaking Union in London. Who knows, an OBA may yet become as prestigious as an OBE.

While the ritzier end of the international art and antiques market continues to thrive, spare a thought for the more modestly priced end of the industry. The smaller provincial auctions, dealers and fairs may not attract quite so many column inches, but there is encouraging activity here too. Last week it was announced that well-known UK fairs entrepreneur Sue Ede has acquired the popular Bath Decorative Antiques Fair

from Bath-based dealer Robin Coleman, who has organized it for the past 23 years. Patrick Macintosh, a Sherborne-based furniture dealer and stalwart exhibitor at the Bath fair over many years, said, “As a founder exhibitor at Bath I feel very much part of the setup and will be really sad to see Robin step down. I have exhibited at Sueʼs fairs in the past; she is a consummate professional but with a kind heart and our interests at the fore — just like Robin — and I know she will preserve the style and spirit of the fair going forward.”

And so from Bath to Benin. This week saw the opening of Cargoland — an exhibition at London’s October Gallery of new work by Benin-born contemporary artist Romuald Hazoumé. In recent years, Hazoumé has garnered a broad international reputation as one of the most exciting young contemporary artists to emerge from West Africa. While he is wide-ranging in his concerns, one of his signature approaches is to take discarded petrol cans, kettles and other objects and apply various found materials to turn them into masks. 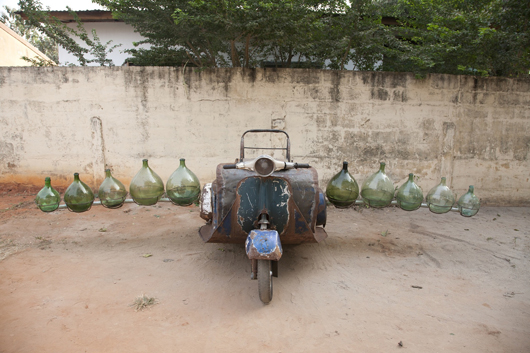 His work thus pays homage on the one hand to the long tradition of so-called African tribal art that exerted a powerful impact on European modern artists such as Picasso and his contemporaries, while at the same time commenting on the socio-economic realities of life in contemporary West Africa.

Some of the recent works comprise petrol cans suspended from battered old motor scooters to form a kind of mechanical tree in an elegant reference to the dangerous practice of running black market petrol across the borders of neighboring Benin and Nigeria. 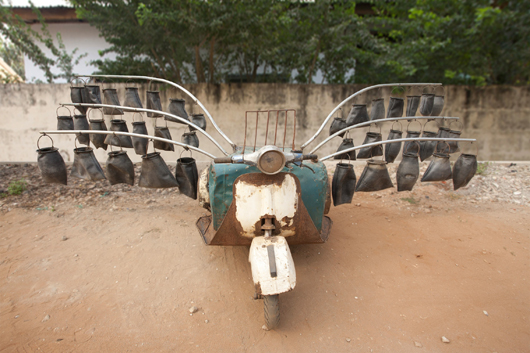 Finally, last week saw the annual Cork Street Open when the galleries in historic Cork Street — one of London’s most illustrious centers of modern and contemporary art — opened their doors for the evening. Auction Central News dropped in to the Beaux Arts gallery

The Beaux Arts gallery in London’s Cork Street opened its doors to the public this week to show its mixed Summer Exhibition as part of the Cork Street Open evening. In the window is Marilène Oliver’s Dreamcatcher, 2009. Image courtesy Beaux Arts.

one of the street’s longest-established galleries run by Reg and Patricia Singh. They were staging a mixed show by some of their most established artists alongside new work by more emerging talents.

As the wine flowed, visitors mingled among the Lynn Chadwicks and the Elisabeth Frink sculptures, but it was the West Country sculptor Simon Allen who was attracting most attention. Allen’s beautifully crafted wall sculptures carved from wood and covered in silver and gold leaf have been winning admirers internationally in recent years. The Beaux Arts show included a new work by Allen entitled Pollen. 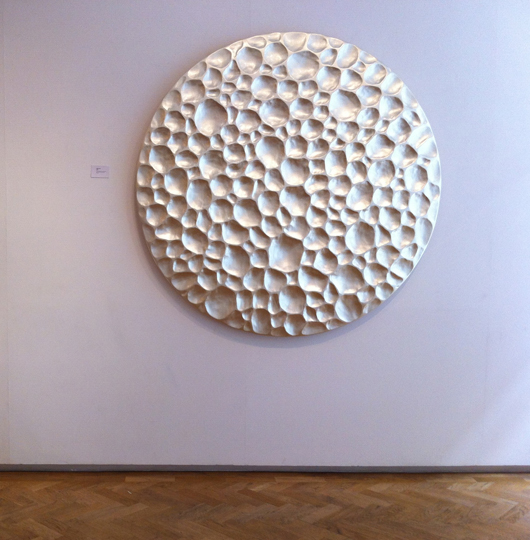 By closing time it was works by Elisabeth Frink and Simon Allen that had found buyers. The show continues until Sept. 1.