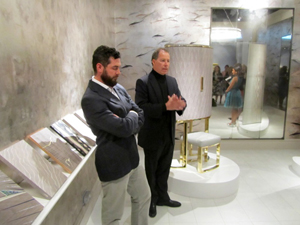 LONDON – David Armstrong-Jones, better known as Viscount Linley, is no ordinary member of the British Royal Family. Chairman of auction house Christie’s, he is also a craftsman designer of distinction whose bespoke furniture is in keen demand among wealthy clients the world over. (Fig. 1)

Yet despite his international reputation and high-class client list, David Linley was never allowed to show his furniture at the Grosvenor House Art & Antiques Fair which, until it closed in 2009, was regarded as London’s most prestigious art fair. “I was banned from the Grosvenor House Fair,” Linley told invited visitors to his company’s stand at the Masterpiece London Fair in Chelsea this week. “The fact that we are welcomed here at Masterpiece reveals how much things have changed,” he added.

Masterpiece London, founded in 2010, was established not only to fill the art market vacuum created by the demise of the Grosvenor House event, but also to satisfy the booming demand among the world’s wealthiest individuals for a range of ‘conspicuous consumption’ goods such as Maserati motor cars, contemporary jewellery, and gold-plated sculptures of Kate Moss by the likes of Marc Quinn.

Masterpieces of hand-crafted furniture also fit comfortably within that broad mix. One of Linley’s specially-commissioned ‘tailor-made’ four-fold screens in dark oak with rose-gold inlaid details will set you back in the region of £100,000 ($170,365). 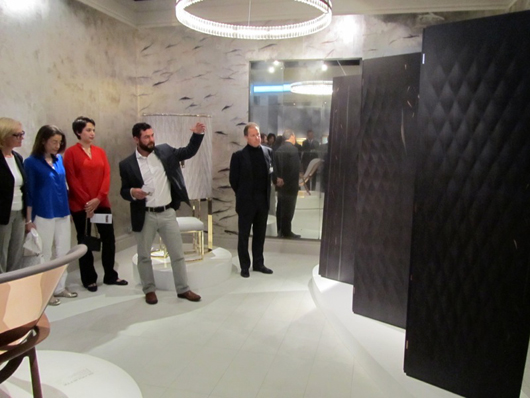 Now in its fifth year, Masterpiece London is smaller and thus more manageable than the enormous European Fine Art Fair that takes place annually in Maastricht in March. The broad consensus among the Masterpiece exhibitors we spoke to was that the fair had matured and finally found its own level. It was also attracting its fair share of art world personalities. We spotted über-collector Charles Saatchi strolling the aisles 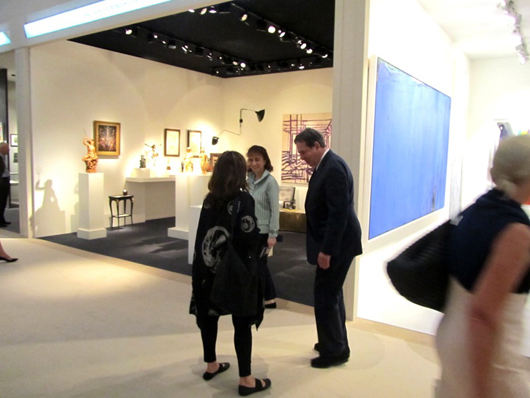 Even White Cube boss Jay Jopling, normally more at home at uncompromisingly contemporary events such as Frieze or Art Basel, dropped by to take a look. 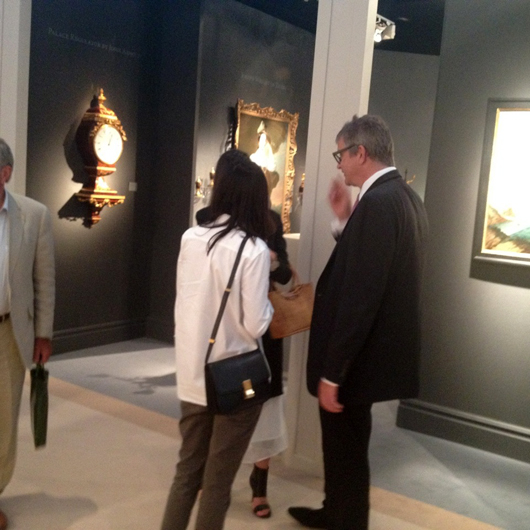 Abby Hignell, long-serving manager at London’s Bowman Sculpture gallery, told Auction Central News that she sensed the fair had “come into its own,” adding that, “the atmosphere felt more positive and relaxed than in previous years.” 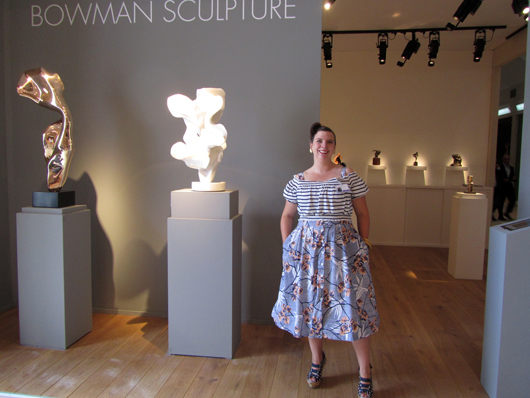 Ms Hignell was encouraged by having successfully sold a very fine bronze cast of The Abduction of Hippodamie by leading French romantic sculptor Albert-Ernest Carrier Belleuse to the Art Gallery of Ontario, Toronto. The work was modelled in 1871 when Auguste Rodin was in the employ of Carrier-Belleuse, making it all the more academically interesting. 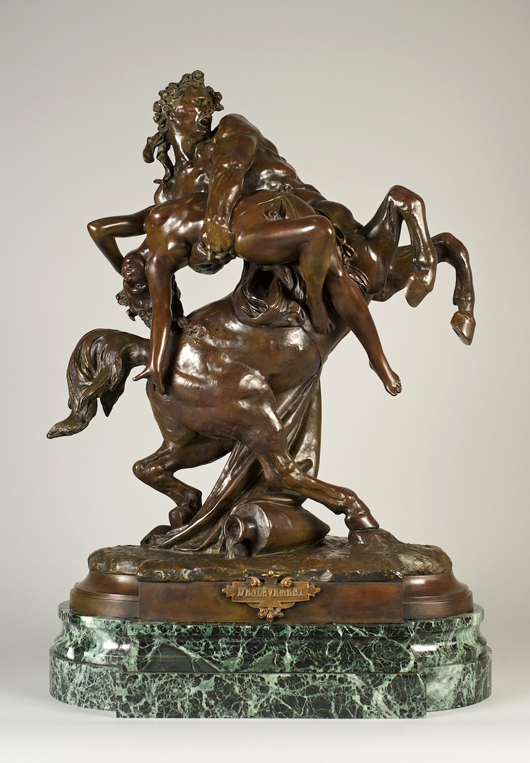 An “exceptional cast” of ‘The Abduction of Hippodamie’, dated 1871, modelled by Auguste Rodin while in the employ of Albert-Ernest Carrier Belleuse. Sold by Bowman Sculpture to the Art Gallery of Ontario at Masterpiece London. Image courtesy of Bowman Sculpture.

Robert Bowman is among the leading dealers in Rodin’s work and he and Ms Hignell have also helped organise an important symposium on the artist’s work to be held at the Victoria and Albert Museum on July 12, celebrating the centenary of Rodin’s significant gift of 18 works to the V&A in 1914.

Sculpture was generally well-represented at this year’s Masterpiece. With dramatic bravado Gerry Farrell, of Sladmore Gallery, transplanted the entire studio of sculptor Nic Fiddian-Green onto the Sladmore stand at Masterpiece. 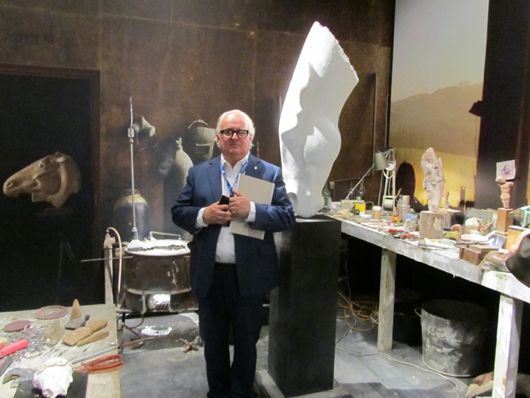 The installation included every minuscule detail of the artist’s Surrey hill-top studio, including plaster dust, welding gear, maquettes and drawings…and even a crumpled Coca Cola can. “Nic’s work is all about the handmade, the craft of sculpture,” said Mr Farrell. “We wanted to communicate that approach and also do something authentic and different.” His efforts paid off, winning the Best Stand Award at this year’s fair.

Art fairs are steadily replacing the traditional bricks and mortar gallery-based way of doing business. When dealers like Sladmore take a risk with their stand it not only makes for good publicity, it also enhances the visitor experience for these sprawling marquee events can be exhausting things to attend. Thankfully there is often a sculpture park to relax in afterwards, weather permitting. This year’s outdoor display in Ranelagh Gardens in the Royal Hospital, Chelsea was devoted to the work of Philip King, the veteran British exponent of coloured sculpture, who celebrates his 80th birthday this year.

Needless to say, strolling aisle upon aisle of blue-chip luxury goods can be tough on the strongest of legs, so the Masterpiece organisers charitably provide golf buggies to ferry visitors from the Royal Hospital Garden gates to the fair marquee. 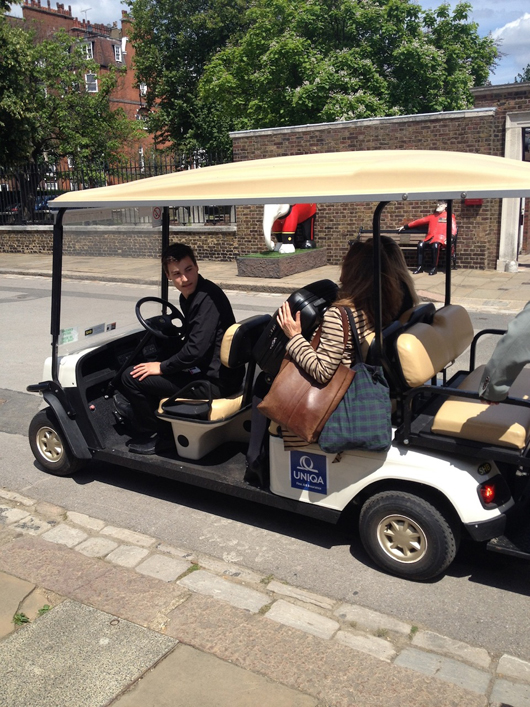 There is now an art fair of some kind in London most months of the year. Masterpiece arrived just a fortnight or so after Art Antiques London closed in Kensington Gardens. Quite how long art fairs can continue to proliferate before the market collapses from over-nourishment remains to be seen. Art Antiques London delivered a host of significant sales, however, so it seems that, for the present at least, the demand is there to meet the seemingly endless supply. 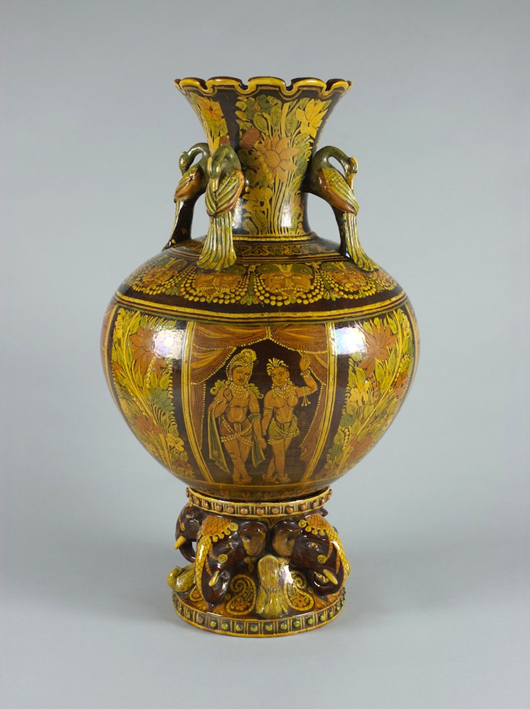 It perhaps goes without saying that art fairs like Art Antiques London and Masterpiece benefit significantly from the capital’s status as a leading financial centre. Middle-class Asian and Russian private investors are pumping the capital’s property boom, but they are also driving prices in the art market. The Financial Times recently quoted property group Jones Lang Lasalle predicting that, “Russian capital flight could quadruple year-on-year,” so the market seems likely to remain buoyant for the immediate future. This may also have been a factor in the success of specialist Russian art auction house MacDougall’s recent sale in London where a private collector secured Pavel Kuznetsov’s avant-garde masterpiece of 1912 entitled ‘Eastern City, Bukhara’, for a new auction record for the artist at £2,367,600 ($4,030,000).

Away from the fairs circuit, independent curators and art historians continue to excavate seams of creativity from earlier periods, offering a reminder that the current obsession with contemporary art is not the only show in town. The tiny Nunnery Gallery in Bow in the East End currently has an exhibition of work by the all too long-neglected East London Group of artists. One of the group’s claims to what little fame it enjoyed was that the great Walter Richard Sickert was among its visiting instructors. But this sparkling little gem of a show reveals that there was much more to the group than a famous teacher. Although by no means household names, the group’s members nevertheless had an unerring facility for capturing the very particular ambience of the East London urban scene. Some of the works have an appealing noir quality reminiscent of Edward Hopper: lonely buildings, deserted streets, decommissioned industrial structures — many of which have since been replaced by flyovers and other developments. All, however, are rendered with a touching intimacy. This is one of those rare, ‘must-see’ exhibitions that makes the trip out to the distant East End a most worthwhile safari. 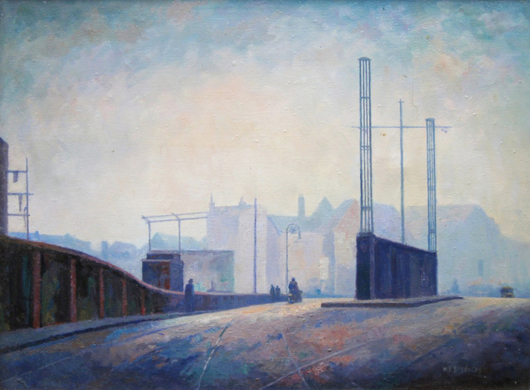