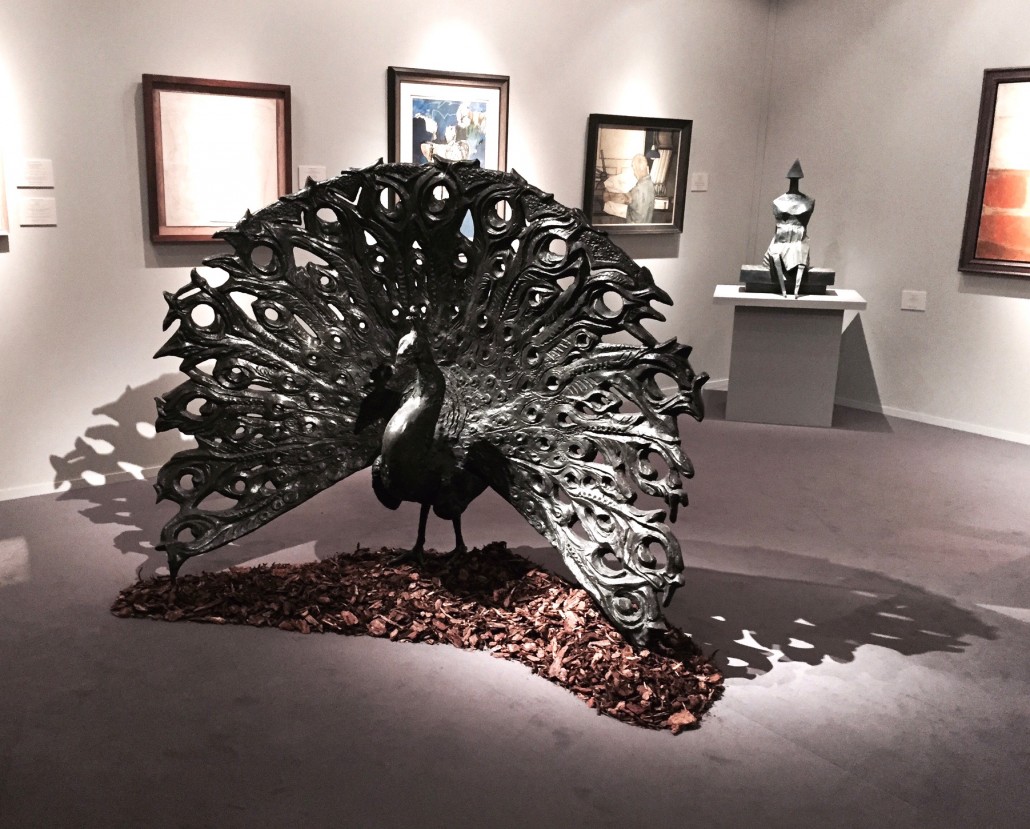 This imposing bronze peacock by the English sculptor Gertrude Hermes was priced at £95,000 ($149,350) on the stand of London-based Modern British dealers Osborne Samuel at the Masterpiece fair. Image Auction Central News.

LONDON — Some art market research companies would have us believe that the heyday of art fairs is over and that the so-called “event-driven” marketplace is on the wane. It only requires an hour or two walking around London’s most prestigious art fairs during an unseasonably warm June to dispel such gloomy prognostications.

This may have been partly due to some impeccably coordinated timing by the organizers of the three main events this year. The Art Antiques London fair on June 12-18 was immediately followed by the Summer Olympia Art and Antiques Fair from the 18th to the 28th, before the up-market Masterpiece fair ended the month from June 28 to the July 1.

All three events provided ample indication that if you have the right things to sell, then sell them you almost certainly will, since London is now the preferred home to many of the world’s super-rich.

It is not uncommon to hear that film stars and celebrities attended the opening days of the London art fairs, but it is rare to see them actually buying. We spotted the English-born Hollywood actor Julian Sands patrolling the stands at Olympia, writing checks for what may have been additions to his renowned collections of Irish and Indian silver, two collecting categories on which he is a respected authority.

At the exhibition of Lucknow silver at the Los Angeles County Museum of Art in 2010, Sands revealed: “I acquire things with the ferocity of a pirate, but like a pirate I just like to dig a hole in the sand and drop it in and head off for more. It’s an insatiable greed, foiled by this Trappist-like renunciation.”

He appears to have put the renunciation on one side for the time being for he was prowling the aisles at Olympia with piratical ferocity. 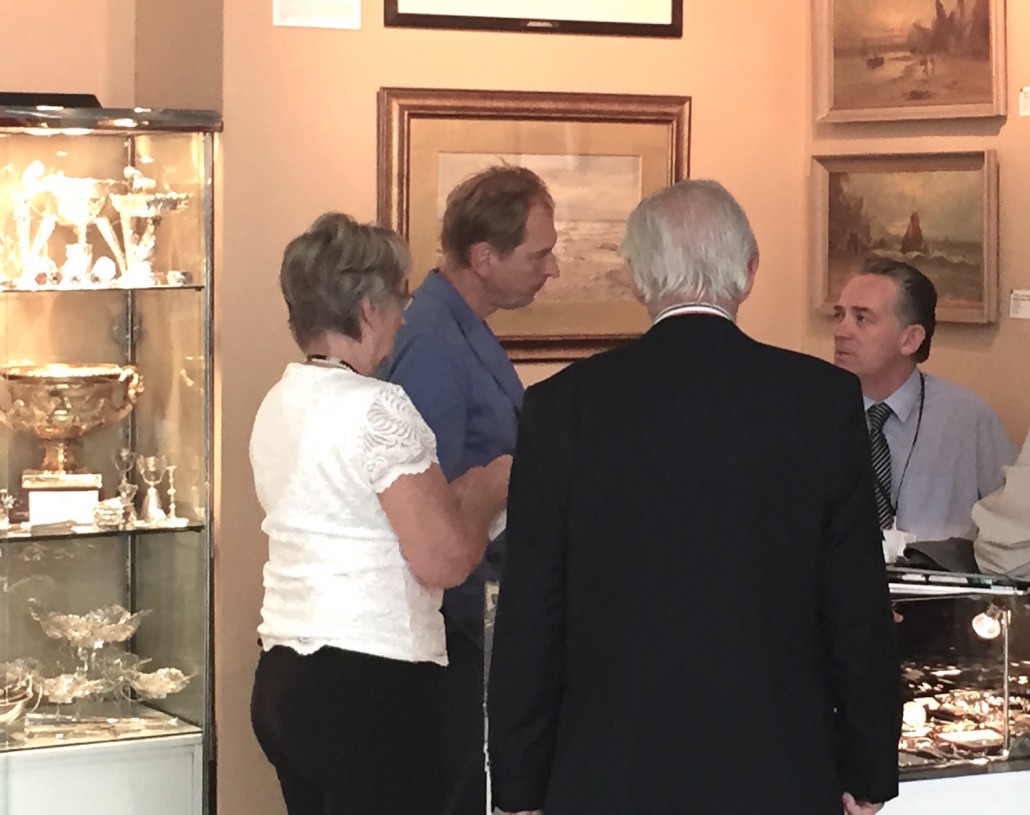 This year’s Olympia looked smarter than it has for a long time. It remains one of the few fairs that manages to show  high-value objects without making you feel you’ve strayed into a billionaire’s apartment without permission. Once again this year it struck a balance between fine art and objets d’art that makes the experience deeply enjoyable. The fact that many things are rather more affordable than at TEFAF or Masterpiece may be another reason for its wide appeal. 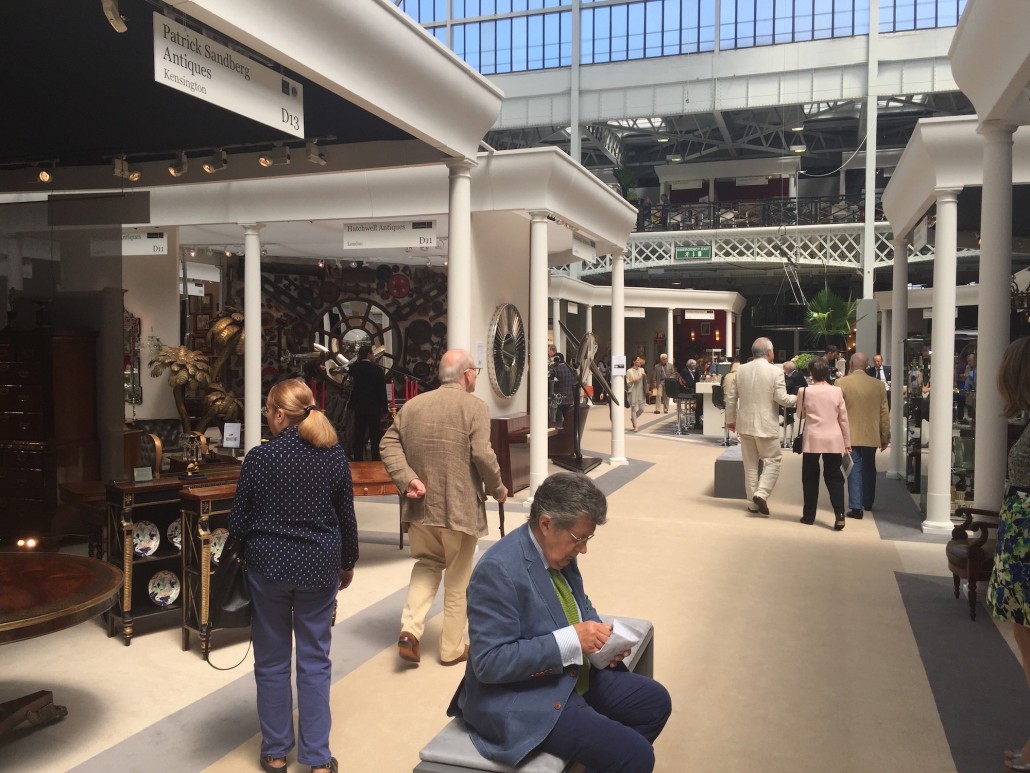 We were struck by a painting entitled The Fountain of Acis, an impressive, uncharacteristically large oil by Modern British artist Ivon Hitchens on the stand of London dealer James Hyman.

A one-off commission for a young couple in 1964, it was priced at £180,000 ($283,000). That did not seem expensive for a name like Kitchens but as Hyman observed, “It may be too big to go above the fireplace in today’s homes. He added that he was nevertheless optimistic of finding a buyer. 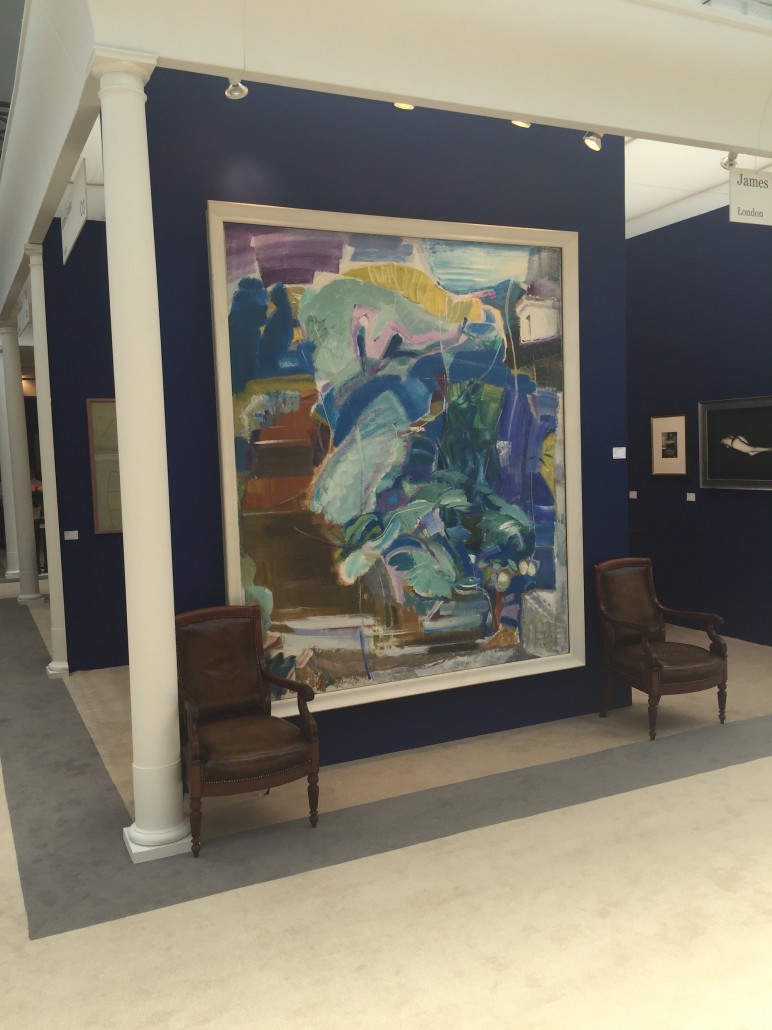 ‘The Fountain of Acis,’ an unusually large oil by Modern British artist Ivon Hitchens, priced at £180,000 ($283,000) on the stand of London dealer James Hyman at the June Olympia Fair. Image Auction Central News.

A few stands away, Ivon Hitchens’ grandson, Simon Hitchens, a successful artist in his own right, was showing a compelling new video piece on the stand of works of art dealer and former Mallett director Thomas Woodham-Smith. Better known for his outdoor sculpture, Simon’s new video work, titled Genesis, shows a huge bolder in a remote desert location, the light, air and cloudscape subtly changing around it.

“Can you guess where this landscape might be?” Simon asked us. We pitched a few suggestions, all wrong. “I’d love to tell you, but I won’t,” he said. We’ll refrain from revealing what makes the piece so mesmerizing in case you get a chance to experience it at a future fair, but suffice to say that it was not only us who were bewitched by its mysterious magnetism. At £15,000 ($23,650) it seemed reasonably priced given how much of today’s contemporary video art is entirely bereft of aesthetic content, mind-numbingly boring and eye-wateringly expensive to boot. 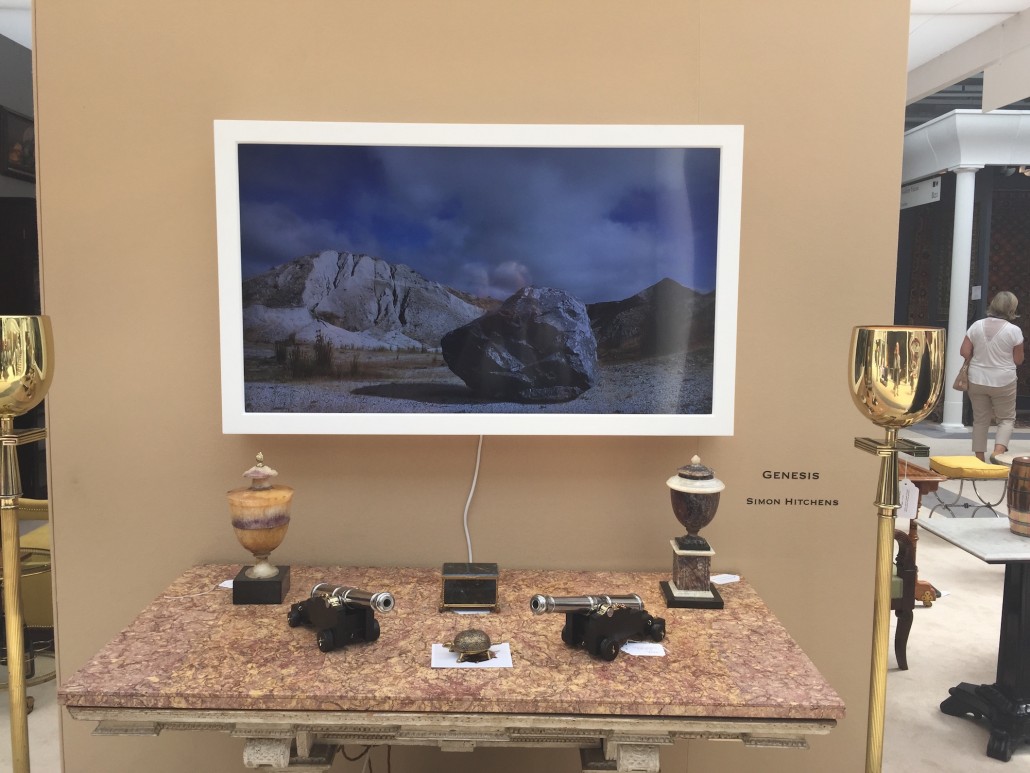 British artist Simon Hitchens, better known for his outdoor sculpture, showed this new video work, ‘Genesis,’ on the stand of Thomas Woodham-Smith at the Olympia fair, where it was priced at £15,000 ($23,650). Image Auction Central News.

Thomas Woodham-Smith happens also to have been one of the masterminds behind the Masterpiece Fair, which this year opened on June 28 at its usual location at the Old Hospital grounds in Chelsea. One of Woodham-Smith’s aspirations in co-founding the fair was to achieve the “cross-over effect” in which contemporary objects are experienced alongside more ancient and unusual decorative material. His instinct was spot-on in that regard for that is precisely the combination that seems to attract today’s high net worth individuals. You might also call it by its fashionable new term, “meta-luxury,” which is fast building into an art market category in its own right with an entire tailwind of economic theory to back it up.

To illustrate this, at the 2015 Masterpiece fair you could feast your eyes on a Riva Junior power boat parked outside the fair’s Le Caprice restaurant, where punters were invited to enter an auction to win it. 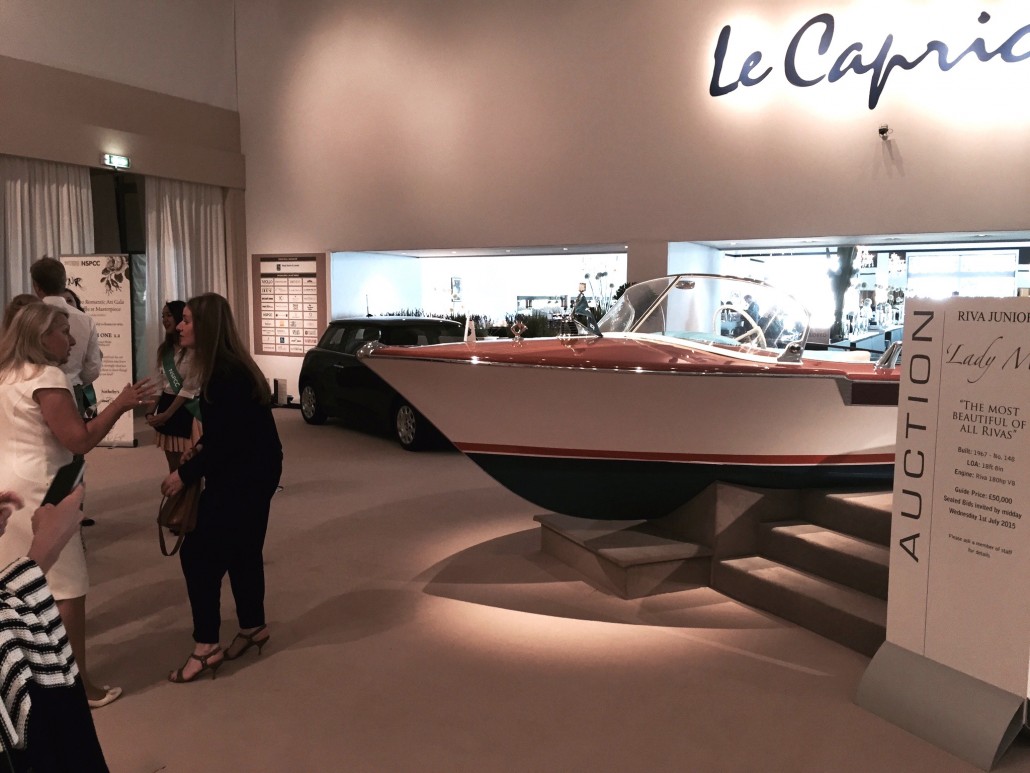 This Riva Junior power boat was to be auctioned at the 2015 Masterpiece fair. Image Auction Central News.

A few aisles away, rubbing shoulders with the Egyptian antiquities and the Renaissance paintings was the Maserati stand. 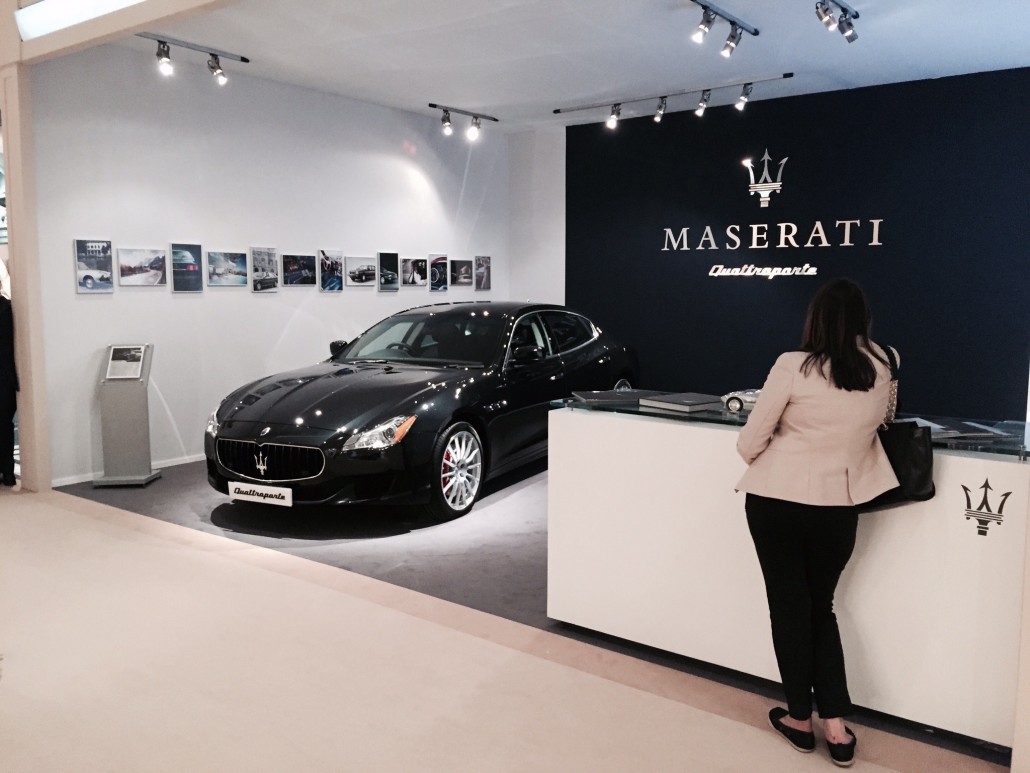 Today’s fine art fairs are all about luxury goods. The Maserati stand was cheek by jowl with ancient works of art at the 2015 Masterpiece fair. Image Auction Central News.

Steinway produces one of these unique, memorial instruments every 100,000th piano they make. The first one they made is now in the White House. It’s a fair bet that if Elton John doesn’t snap it up, this one, priced at at £1.85 million ($2.9 million), could end up beside the swimming pool of one of the world’s ever-multiplying billionaires. We can vouch for the fact that it sounds spectacular, although with Aijsa tickling the ivories that was hardly surprising. 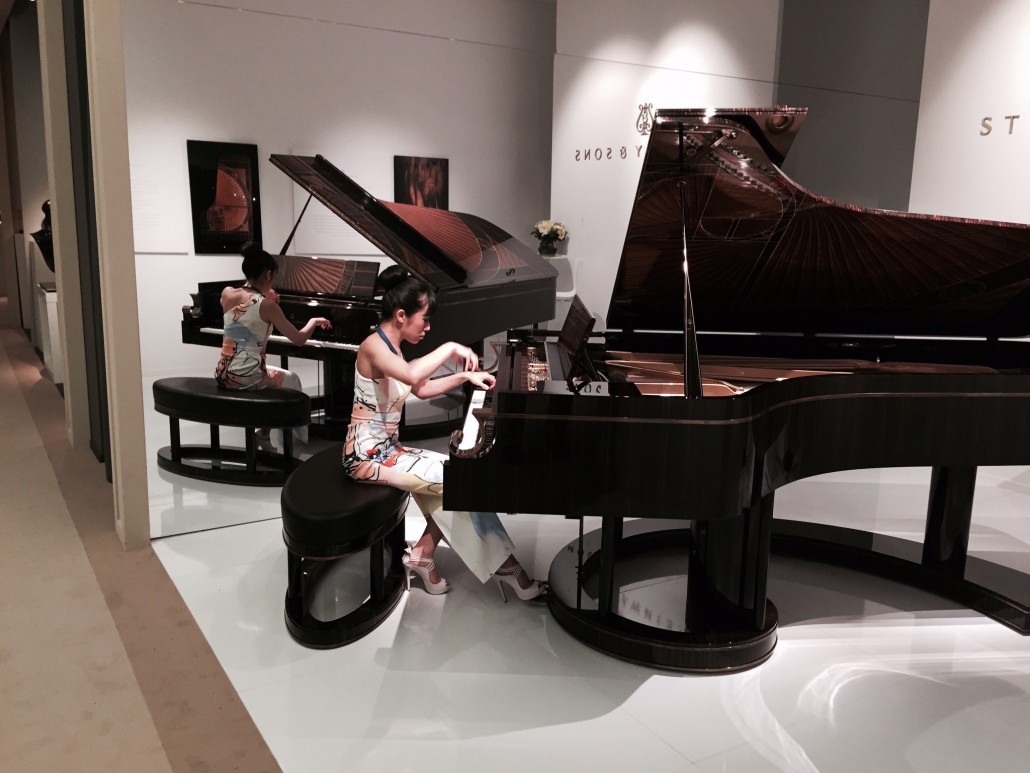 Steinway concert pianist Aijsa enchanting visitors at the Masterpiece fair with a tune on ‘The Fibonacci,’ a unique instrument to mark the company’s 600,000th piano. It was priced at £1.85 million ($2.9m). Image Auction Central News.

So much for the bling and the billionaire’s playthings. Our vote for the most beautiful and art historically interesting object in this year’s fair went to a late 14th-century carved and painted wood figure of St. Sebastian on the stand of De Backker Medieval Art of Hoogstraten, Belgium. Pieter de Backker told us that he had only just managed to acquire the figure a few days before the fair opened. He had capitalized on the acquisition to dramatic effect, positioning it between a pair of 15th-century weather-beaten wooden doors thought to have originated from a fortified castle in northern Spain.

“We are sure the figure is Tuscan,” de Backer told Auction Central News, pointing to a cavity carved into the figure’s back and explaining that it was intended as a reliquary. He was asking in the region of €135,000 ($150,300) for the figure and €37,500 ($41,750) for the ancient castle doors. The price included delivery and on-site reconstruction. 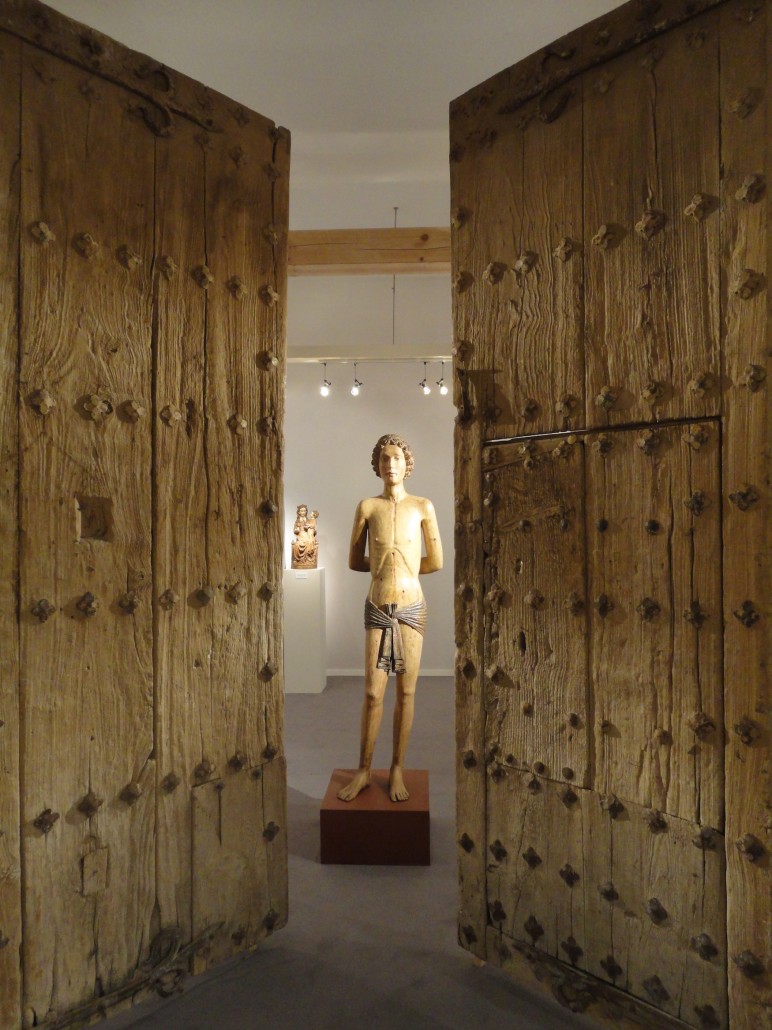 In the modern category we were struck by an impressive bronze peacock by the English printmaker, wood engraver and sculptor Gertrude Hermes (1901-1983) on the stand of London-based Modern British dealers Osborne Samuel.

“We found it in a garden in New York,” said Peter Osborne, adding, “It is one of only two in the catalogue raisonné and the only big sculpture she made.” Peter Osborne has told us in the past that “You have to take masterpieces to Masterpiece.” There’s little doubt that Hermes’s peacock fitted that bill. They were asking £95,000 ($149,350).

And finally some sad news for admirers of the work of the late American artist Thomas Kinkade (1958-12012). The lights went out for the self-styled “Painter of Light” when he died in 2012 of “acute intoxication” from alcohol and Valium. Now the London store that exclusively retailed his Disneyesque pictures is being shuttered for good. 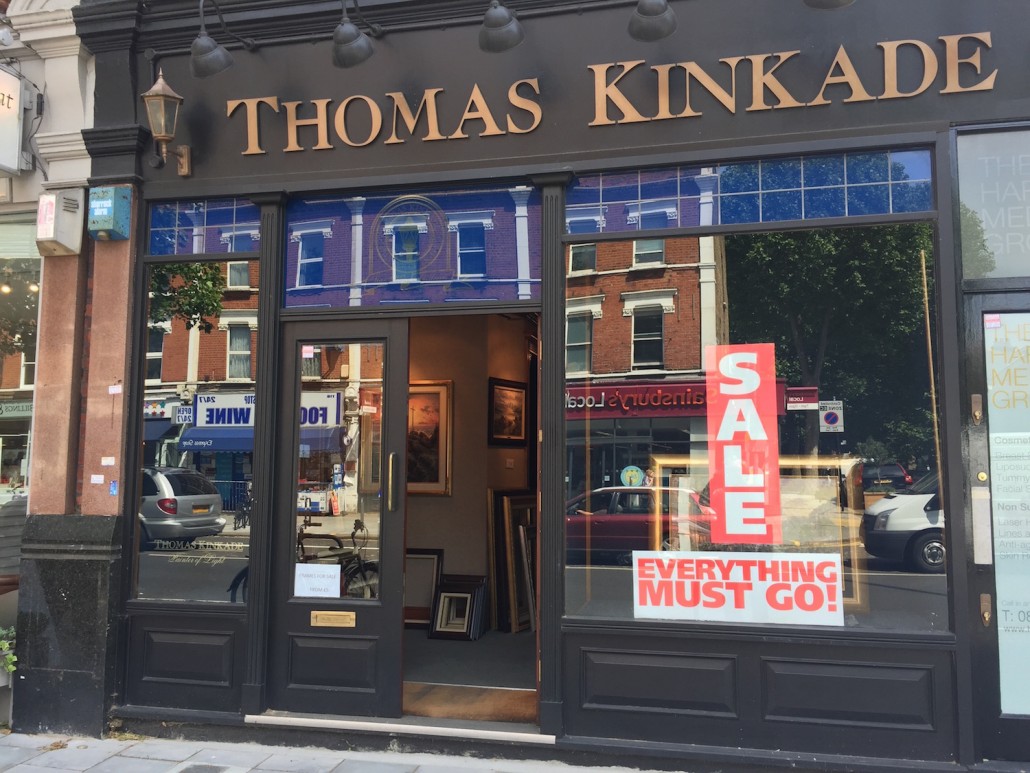 “We’re going online,” was the explanation offered by the tight-lipped shop assistant when Auction Central News made a passing visit last week. Followers of the torrid Kinkade saga will know that the purveyor of mass-produced chocolate box landscapes left something of a tangled web when following his demise his wife and mistress began slugging it out over his $66 million estate. According to the ever-reliable Wikipedia, it is estimated that 1 in every 20 American homes owns a copy of one of Kinkade’s paintings.

One can safely venture that the UK has witnessed no such market saturation. It was a forlorn sight to see stacks of the cheap frames in which Kinkade framed his works being flogged off at a fiver apiece ($7.85).